Semiconductor quantum dots (QDs) are thought to be a promising candidate for a single-quantum emitter in on-chip systems because of their well-developed growth and fabrication techniques.1 Semiconductor QDs, however, have a number of inherent limitations that need to be overcome before they can be used in practical applications. For example, QDs in semiconductors are strongly affected by elements (e.g., phonons) in the surrounding environment, which results in short nonradiative decay times and rapid dephasing processes. Despite the high intrinsic radiative decay rates of semiconductor QDs compared with those of other single-quantum emitters (such as atoms and ions), the radiative decay rate needs to be further increased so that these fast nonradiative and dephasing processes can be overcome. Furthermore, the collection efficiency of the light that is emitted from conventional QDs embedded in a high-index planar substrate is typically low (about 4%). Processes with which to control and optimize the radiative decay rate of QDs are therefore crucial for increasing their collection efficiency and for realizing efficient single-photon generation. Indeed, improving the collection efficiency would be incredibly useful for the successful application of QDs in quantum information devices.

Over the past few decades extensive efforts have been made to try and realize highly efficient light sources from single QDs, i.e., by introducing various photonics structures.2 A critical problem arises, however, when photonics structures are combined with semiconductor QDs. That is, conventional semiconductor QDs become randomly distributed across the wafer and have non-reproducible sites. Moreover, these QDs have a broad spectral distribution. Achieving spectral overlap between a QD and a photonic cavity is therefore challenging. Moreover, because photonics structures are fabricated using top-down approaches, a predefined QD position is required. Site-controlled QDs have thus been attracting a large amount of attention because they can be used to achieve deterministic coupling with photonics structures or devices.

In particular, in our work, we have shown that semiconductor nano- and micropyramid arrays can provide a template for multidimensional quantum structures (i.e., a single QD at the apex, or a quantum wire at the edges, of a pyramid structure). In contrast to conventional self-assembled QDs, we can use nanopatterning to create a template for pyramid structures and to thus easily control the position of the QDs: see Figure 1(a). To date, we have investigated various materials—including gallium arsenide, indium arsenide, and gallium nitride—as site-controlled QDs on the pyramid structures. Specifically, we found that nitride pyramids have additional advantages when they are formed into a 3D structure. For instance, the built-in field is reduced at the apex (the QD region), and the direction of linear polarization can be manipulated by controlling the elongated direction of the pyramids.3 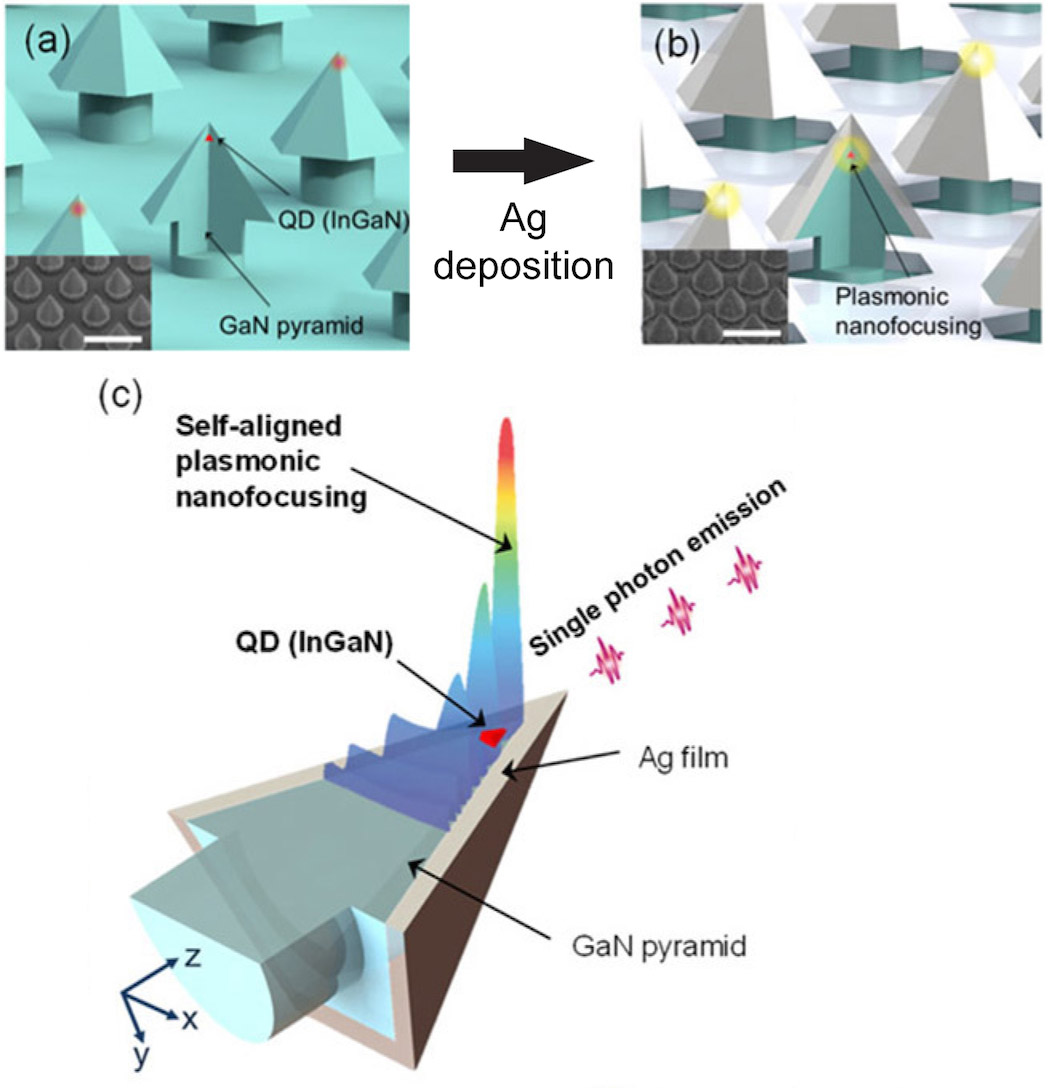 We have continued to focus on semiconductor nanopyramidal structures and have shown that they can serve as a template for self-aligned 3D nanophotonic cavities (as well as for site-controlled QDs). In particular, we have demonstrated the self-aligned deterministic coupling of single QDs to nanofocused plasmonic modes: see Figure 1(b).4 To achieve this, we used metal-organic chemical vapor deposition to deposit a silver film on a pyramidal structure. The pyramid facets thus serve as the 3D tapered plasmonic waveguide, and—see Figure 1(c)—the plasmonic modes are strongly focused in close proximity to each single QD (which are formed on the apices of the pyramid arrays in a self-aligned fashion).

With this approach, we have achieved—see Figure 2(a)—a strong radiative decay rate enhancement factor for the QDs (up to about ∼20). Furthermore, we observed this high enhancement over a wide spectral and temperature range (∼150meV and 4∼170K, respectively). By avoiding nonradiative processes, it is thus possible to exploit this result and to realize a device that operates at high frequency and high temperature. In addition, because of plasmonic nanofocusing, we have used measurements of the second-order correlation function—see Figure 2(b)—to demonstrate ultrafast single-photon generation. 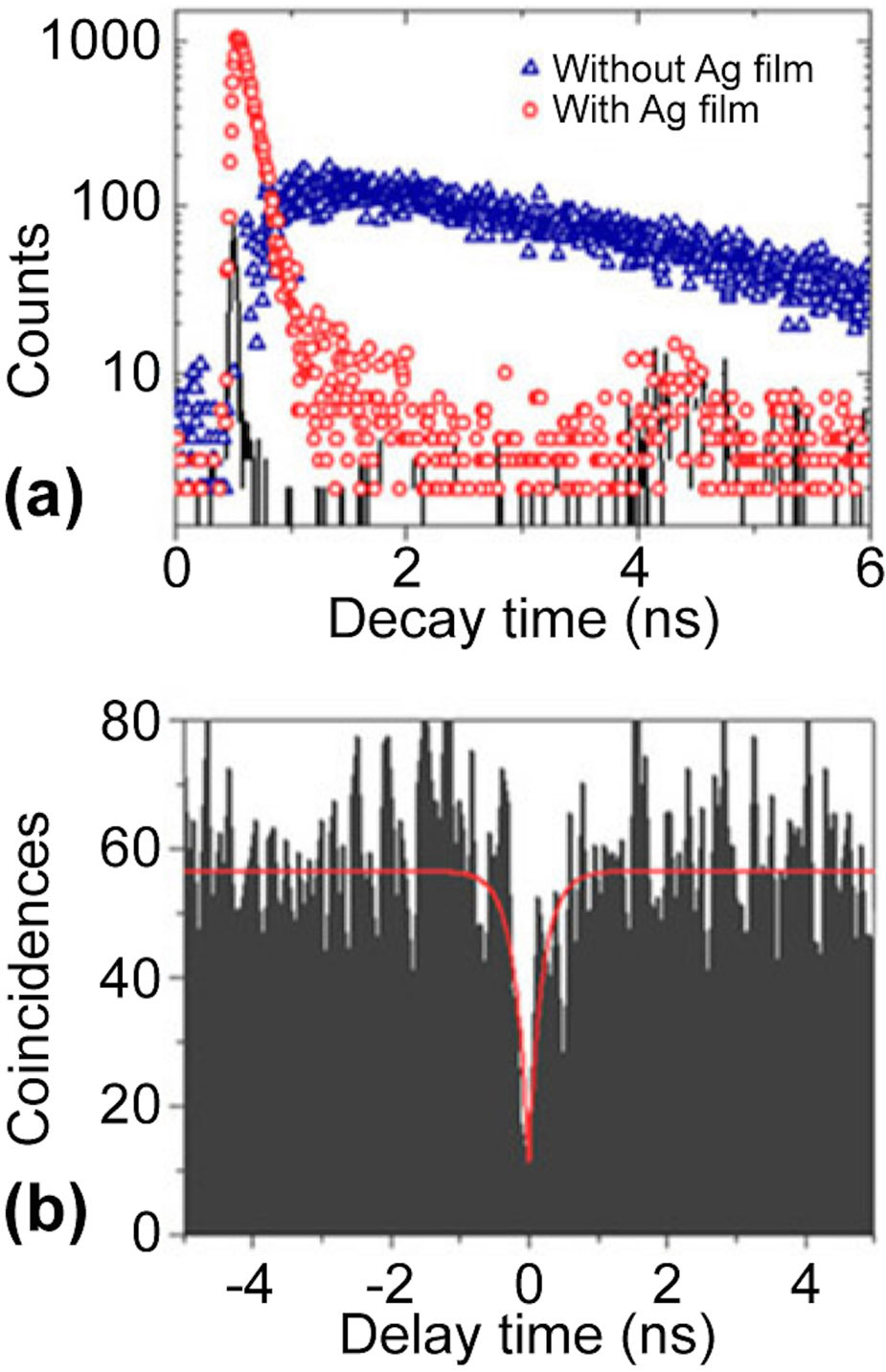 Figure 2. (a) Illustration of the radiative rate enhancement of a single QD with plasmonic nanofocusing. The decay time for the single QD with the Ag film is 0.14ns, whereas that of the QD without the Ag film is 4ns. (b) Nonclassical photon statistics from a Ag-coated pyramid QD, measured from the second-order correlation function of a Hanbury Brown–Twiss setup.4

In our more recent work, we have also suggested that site-controlled QDs in nanopyramid structures can be used as a unidirectional single-photon source.5 To thus realize downward-guided emitted light from a QD, we conformally deposited silver films on the nanopyramids. We also confirmed numerically that the QD at the apex exhibited unidirectional emission toward the bottom of the structure (see Figure 3). Furthermore, we experimentally demonstrated that a UV-curable optical adhesive material can be used to detach the nanopyramid structures from their original substrate. This result has great potential with regard to the use of pyramid emitters in various applications. We also investigated the direction of QD emission from both an as-grown and an inverted (detached) pyramid structure. As predicted in numerical calculations—see Figure 4(a–d)—we observed highly directional single-photon emission from a QD in the inverted-pyramid structure. 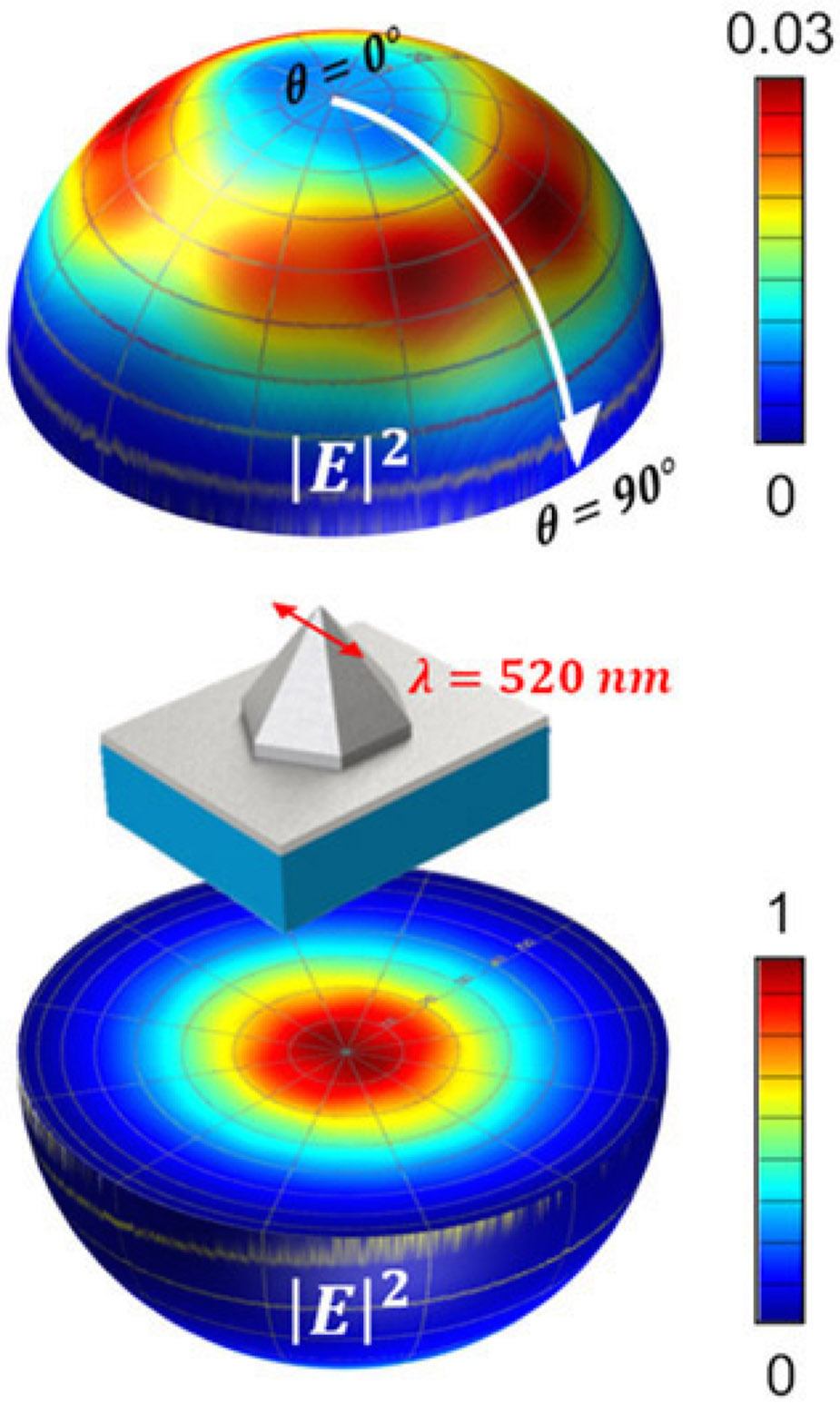 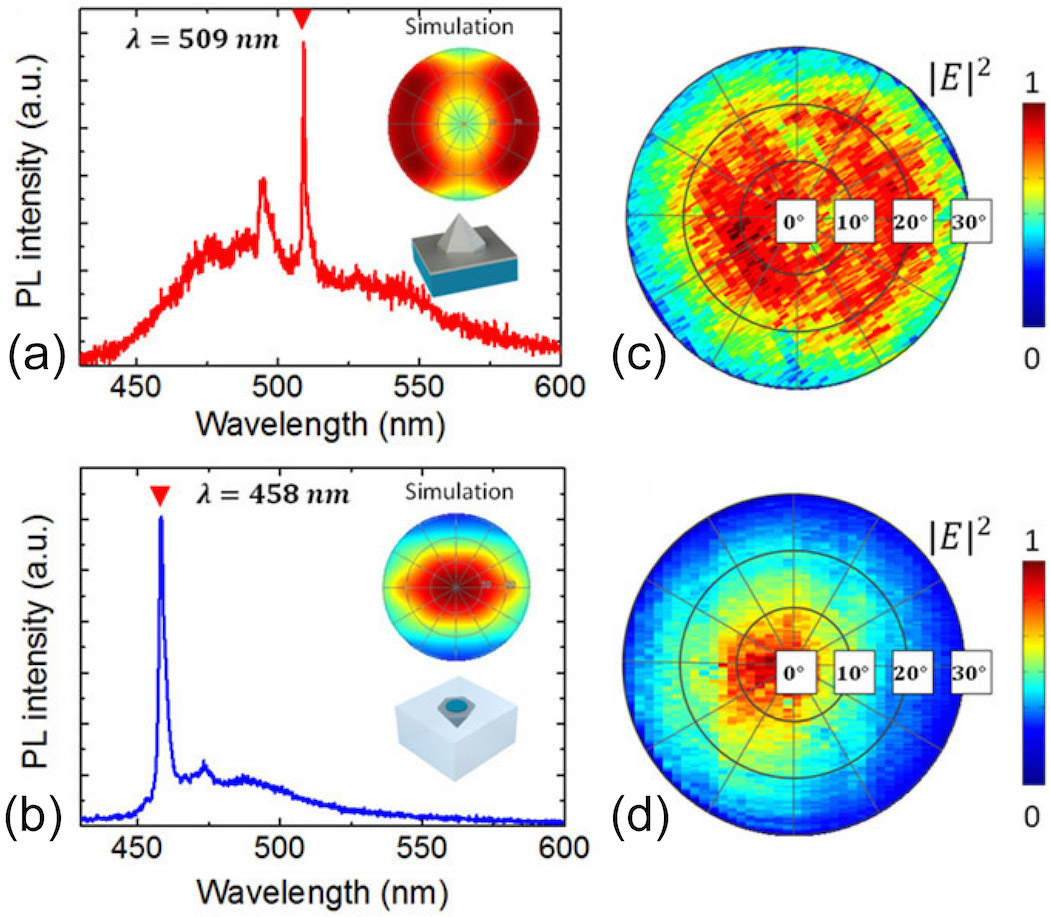 Figure 4. Measured photoluminescence (PL) spectra from (a) as-grown and (b) inverted nanopyramid structures (covered with Ag films). Insets show the structure shapes and the calculated far-field radiation pattern of the structures, in the direction of the detection system. a.u.: Arbitrary units. The measured far-field radiation patterns of a single QD in the (c) as-grown and (d) inverted nanopyramid structures are also shown. The objective lens of the microscope used to obtain these measurements had a numerical aperture of 0.5.5

In summary, we have developed an extremely simple approach for the fabrication of nanopyramid structures that can provide a template for quantum structures. We realize our devices on the full-wafer scale and with high productivity. Our methodology can also be applied to any tapered structure. We believe that the highly directional emission that we achieve with our nanopyramid structures could be easily integrated within a photonic waveguide system (to realize high coupling efficiency). Specifically, we are working on a nanopyramid/optical-fiber integrated system for realizing a high collection efficiency and easy single-photon manipulation. Our scheme will pave the way for bright and unidirectional quantum emitters. Indeed, our approach eliminates the major obstacles that have previously prevented the implementation of practical solid-state quantum emitters and shows great promise for a variety of applications (e.g., quantum cryptography, quantum logic gates, integrated on-chip nanoemitters, and energy-harvesting devices).