The chirp-pulsed amplification (CPA) technique involves stretching and compressing a laser pulse in the temporal domain before and after amplification.1 Since this technique was first proposed in 1985, it has been used to successfully solve the problem of how to achieve ultrashort laser pulse amplification.2 In addition, the development of mode-locking lasers—particularly the advent of the self-mode-lock titanium-sapphire (Ti:S) laser—has allowed the duration of ultrashort laser pulses to reach the femtosecond (fs) domain.3 Since the 1990s, the Ti:S/CPA technique has thus been used to rapidly develop ultra-intense and ultrashort lasers. Theoretically, the amplified output energy of such lasers can be greatly improved with the use of large-aperture Ti:S crystals. When larger-aperture Ti:S crystals are pumped at higher pump fluence and energy, however, the transverse amplified spontaneous emission (TASE) and parasitic lasing (PL) within the booster-amplifier volume are easier to suppress than the amplified pulse energy.4 This is the main barrier to realizing high-energy Ti:S/CPA amplifiers, even as Ti:S crystals with increasing diameters are produced.

At present, there are two main approaches to suppress transverse PL in these laser systems. First, the matched-index cladding (passive) technique can be used to increase the loss of spontaneous emission. In the second (active) technique, optimization of the time delay and lightly doped Ti:S crystals are used to control the transverse gain. To date, several countries have built petawatt-level ultra-intense and ultrashort laser systems (of which the focused intensity can be used to achieve 1021W/cm2) that are based on the Ti:S/CPA approach.5–7 Many research institutions around the world are also currently aiming to develop the first 10PW (i.e., 1015W) laser systems.8, 9

In this work,10 we have developed and experimentally demonstrated a new CPA experimental setup for the generation of near-200J pulse energy. The design of our system (see Figure 1) is based on a six-stage Ti:S CPA amplifier. Its structure is similar to a previous setup,7 but we have added a four-pass amplifier to enhance the energy stability. We use a lightly doped 150 × 46.7mm Ti:S crystal, with 92.6% small pump light absorption (from Crystal System Inc.) for the final amplification stage. The two-pump beam has a 15ns full width at half-maximum (and ∼26ns for the 1/e2 full width). The input seed is the output of an 80 × 32mm Ti:S amplifier (also from Crystal System) that has an energy of 35J. We also use a Cargille Series M refractive index liquid, doped with an absorber (IR 140) as the cladding material, to suppress the PL of the final amplifier. The two pump lines mean that we can amplify the 1053nm pulse to a maximum of 400J, with a 105mm beam in each channel. After the frequency doubling, the two pump beams are up-collimated to 120mm and are spatially filtered (where the image is relayed to the Ti:S crystal surface, with a maximum output energy of 190J at 527nm for each channel). 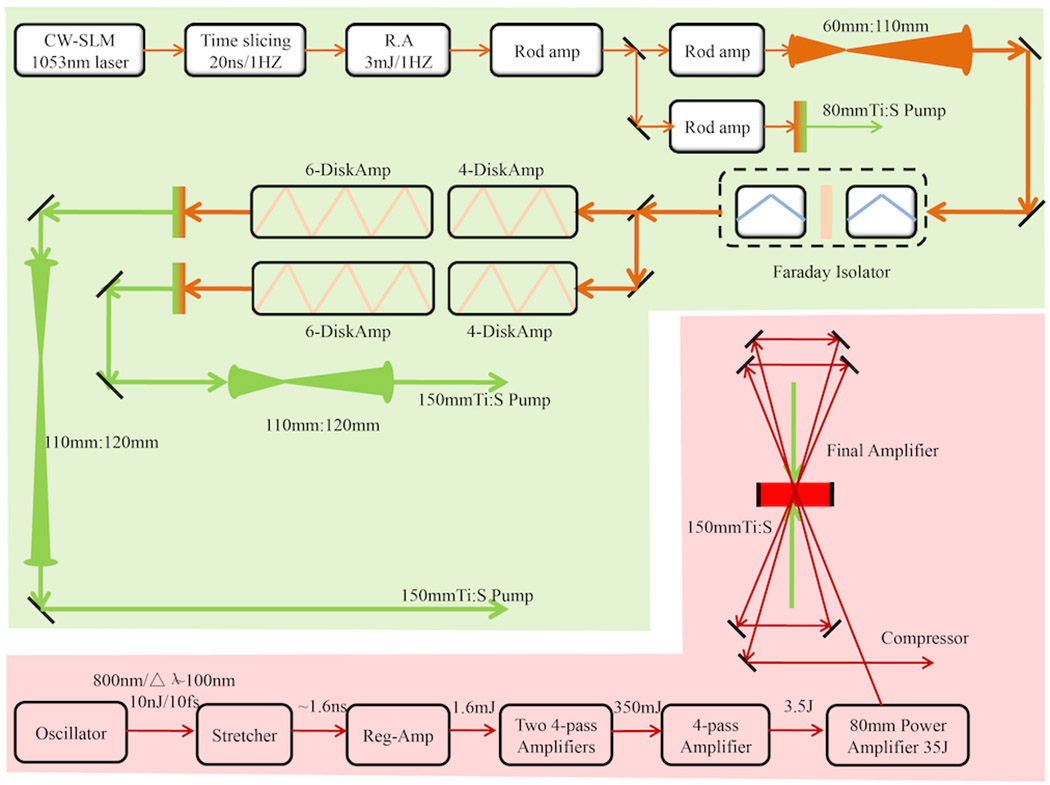 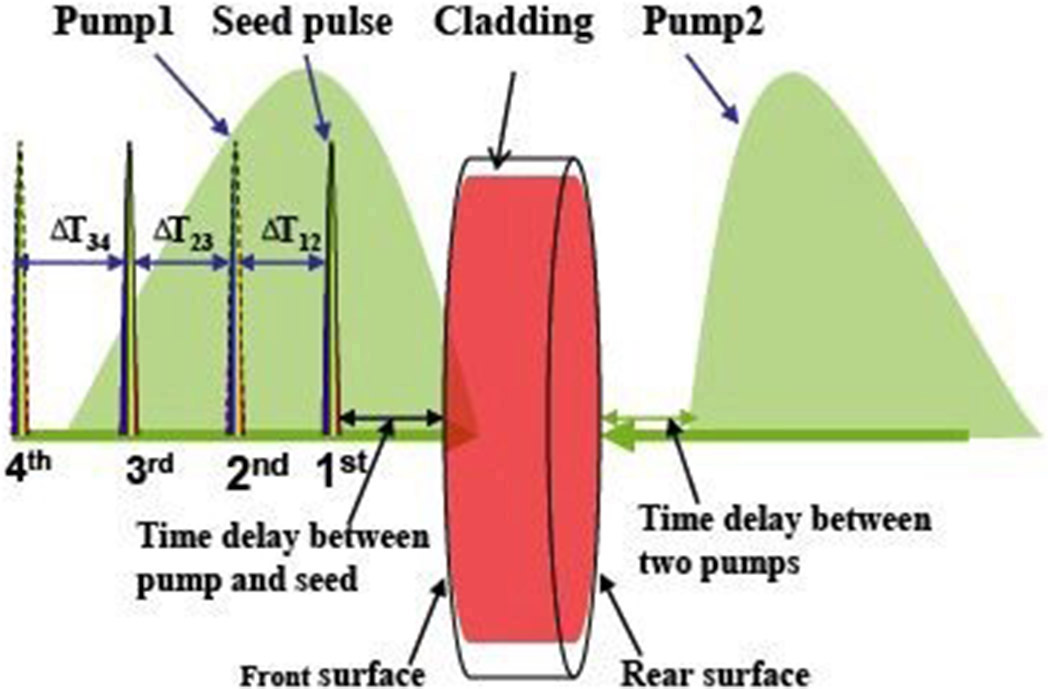 Figure 2. Schematic sketch of the time delay (ΔT) between the two pump pulses. 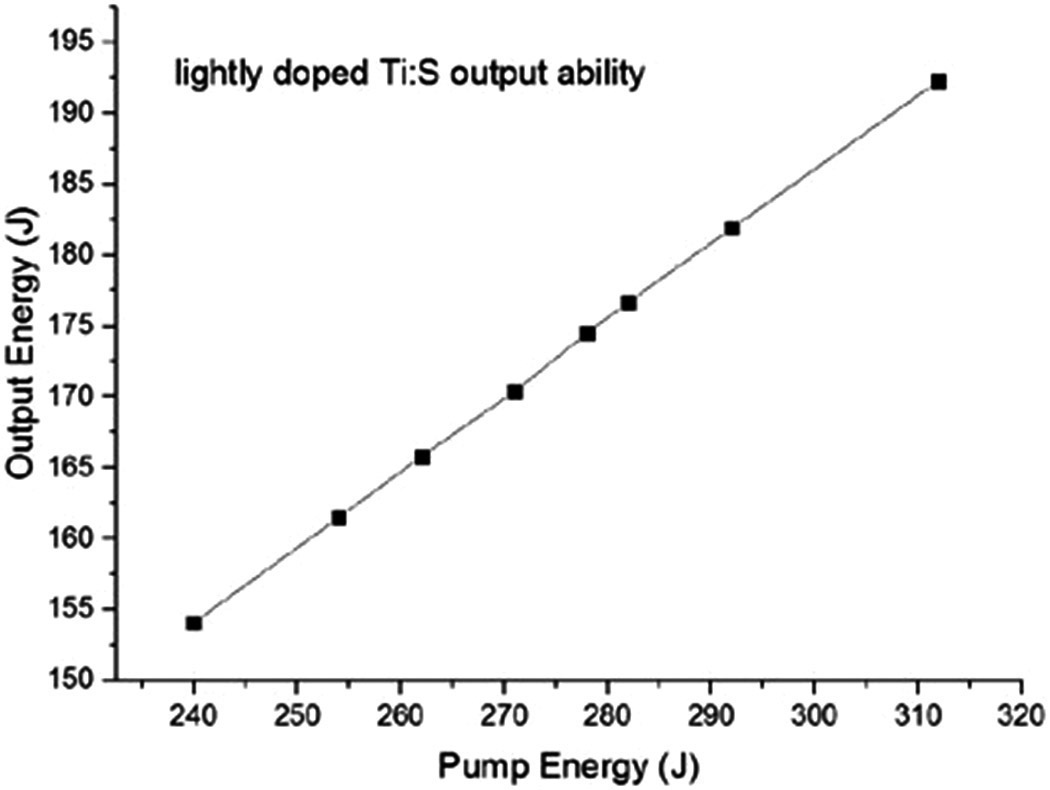 Figure 3. Output of the final lightly doped Ti:S amplifier (as a function of pump energy), after optimization of the time delay.

We have also measured the output of the system when we use a heavily doped 157 × 27.2mm Ti:S crystal (with 95.3% small pump light absorption), but that has otherwise identical components. Even after optimizing the time delay for the heavily doped setup, we achieved an output of only 135.7J. Furthermore, the output ability of the lightly doped Ti:S is less sensitive to the seed-pump delay than the heavily doped crystal. Our results thus indicate that the lightly doped Ti:S crystal is more favorable for overcoming PL and TASE.

In summary, we have experimentally demonstrated the generation of an amplified output energy of 192.3J, and a conversion efficiency of 50%, with a 150mm-diameter Ti:S CPA amplifier. To the best of our knowledge, this is the first time that the 100J-level has been surpassed in a Ti:S laser system. If the compressed pulse duration can reach 27fs,10 the 5PW peak power of the output laser pulse can be realized. Our experimental results provide the basis for implementing larger-aperture Ti:S CPA laser systems with 10PW ultra-intense and ultrashort pulse output. In our recent and ongoing work we are enhancing the performance of the booster-amplifier and large-aperture pulse compressor even further. We have thus developed a novel temporal dual-pulse pumped technique for the suppression of PL and TASE. So far, we have obtained a maximum output energy of 202.8J with a compressed pulse duration of 24fs, as well as a throughput efficiency of 64% (which leads to a peak power of 5.4PW).

The authors are grateful to Lu Xu, Shuai Li, Yi Xu, Zhengzheng Liu, and Jun Lu for fruitful discussions, and to Dingjun Yin and Haihe Lu for technical support.