Terahertz (THz) radiation finds application in a number of fields, including spectroscopy, medicine, and security domains. Additionally, recent developments in THz technologies have led to the emergence of THz and multi-THz nonlinear optics, where intense THz fields show promise for probing fast electronic phenomena, and for the study of novel optical nonlinearities.

The sources that are typically used for these applications—e.g., free-electron lasers (FELs) and large amplifier-based laser systems—are large and complex. As a result, they are difficult to implement in the lab. Quantum cascade lasers (QCLs)1 are relatively new semiconductor sources that operate in the THz and multi-THz range. QCLs are compact and practical devices that are based on intersubband transitions within semiconductor quantum wells. Notably, their intra-cavity powers can approach those that are achieved in FEL-based studies, making QCLs promising for nonlinear applications.

In our work,2 we have achieved frequency mixing between a near-IR (NIR) and a multi-THz beam within a QCL cavity. In this compact setup, the QCL acts as both THz source and nonlinear medium. The incoming NIR beam enters the device and interacts with the QCL material and its THz photon. As a result of this interaction, frequency mixing occurs between NIR and THz light and results in the generation of an optical sideband that exits an aperture on the other side of the QCL: see Figure 1. This transmitted beam can then be detected using standard equipment (i.e., a spectrometer and CCD camera). 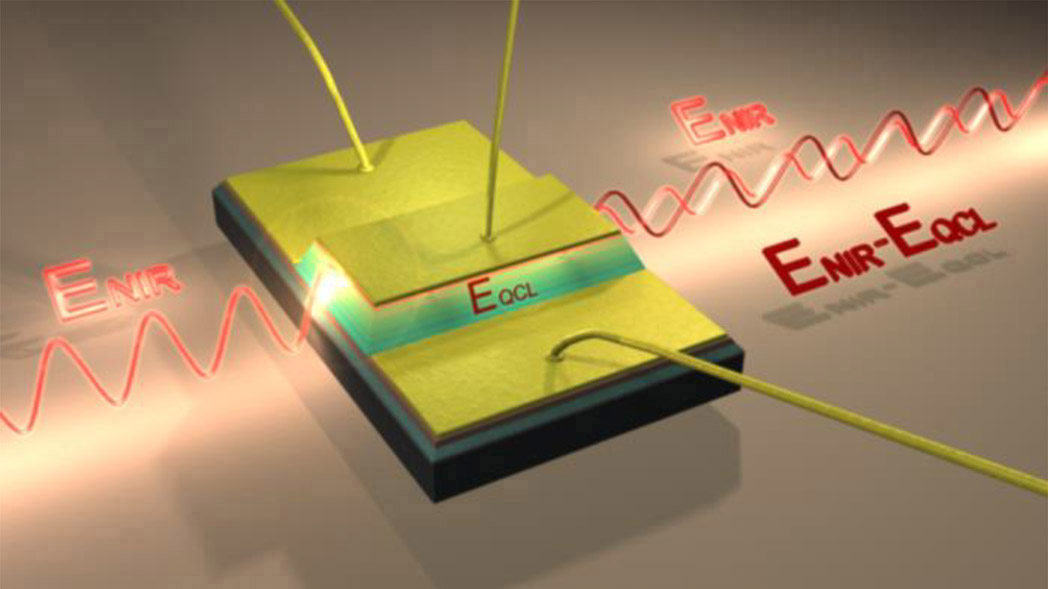 In our experiment, the nonlinear medium is composed of thin gallium arsenide (GaAs) and aluminum GaAs (AlGaAs) semiconductor layers, which form quantum wells and barriers, respectively. These materials normally have a low intrinsic nonlinear susceptibility (i.e., the parameter that dictates the nonlinear conversion efficiency between the excitation and the generated sideband). However, a resonant interband excitation within the quantum wells can significantly enhance the nonlinear susceptibility of the device.3 Furthermore, when the NIR pump is at resonance with the electron and hole states, the nonlinearity is increased and frequency mixing is permitted between the NIR pump and the THz wave from the QCL. A schematic of the QCL band structure is shown in Figure 2. 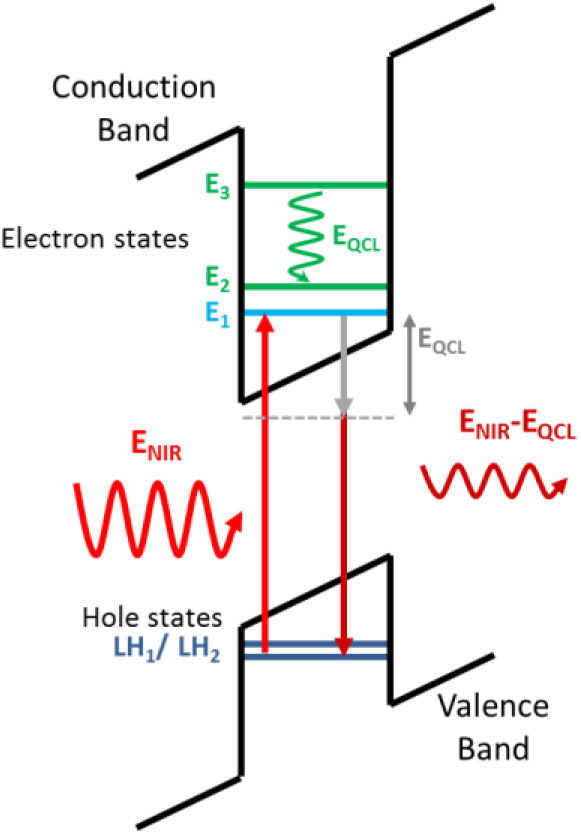 Compared to our previous work, based on THz QCLs operating at cryogenic temperatures,4, 5 we have explored a new range of frequencies in the multi-THz range (i.e., f =30THz and λ∼10μm) at up to room temperature. To achieve this, we fabricated a waveguide that permits a strong spatial overlap between the mid-IR (MIR) mode, the NIR mode, and the active region of the QCL (i.e., the nonlinear medium). This new QCL waveguide combines dielectric confinement (using low-index AlGaAs layers) with plasmon-enhanced (i.e., silicon-doped GaAs) guiding layers.

Figure 3 shows a typical signal transmission that we obtained using this waveguide. Here, we set the NIR excitation to be at resonance with the first electron-hole transitions. The sideband, clearly observed at ENIR – EQCL, was separated from the pump by the QCL photon energy (i.e., EQCL= 135 meV). The inset, which shows an amplified view of the sideband, reveals many modes that reproduce the QCL Fabry-Perot emission spectrum. This result highlights the upconversion of the THz spectrum to the NIR that enables the use of simpler, faster, and more compact detection schemes. Furthermore, the sideband intensity demonstrates a clear resonant nature as a function of the pump energy. This resonant behavior shows that the sideband is generated as a result of the enhanced nonlinearity of the device. Indeed, this behavior agrees with our simulations, which showed a similar dependence of the resonant nonlinear susceptibility on the pump energy. We also investigated the temperature dependence of the nonlinear process at up to room temperature. Interestingly, we found the temperature dependence of the sideband intensity and QCL output power to be identical. This suggests that the resonant nonlinearity is not temperature dependent and is therefore promising for applications where room-temperature operation is desirable. 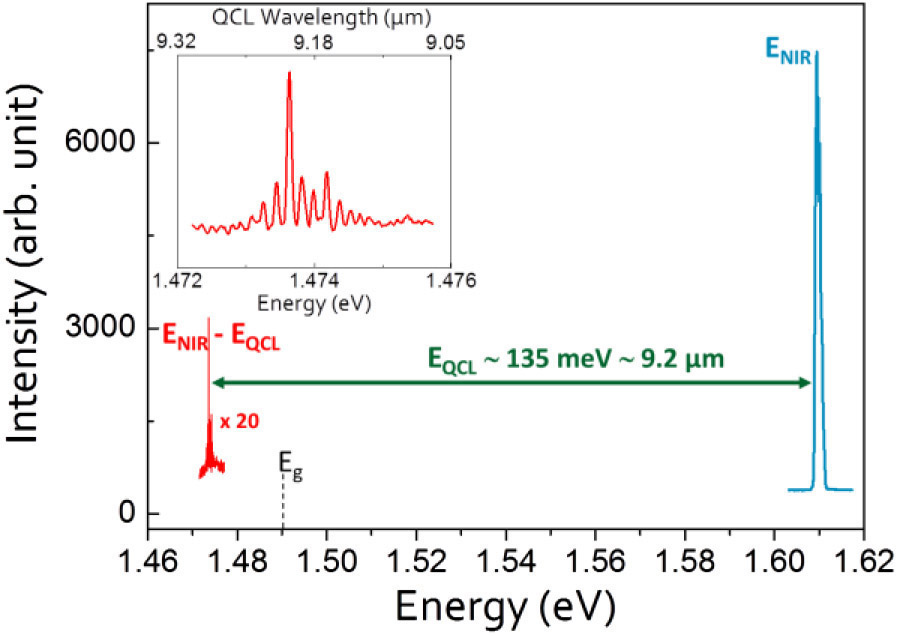 Figure 3. Spectrum showing the pump and the generated difference frequency at a temperature of 210K. Inset: Amplified view of the sideband, showing a replica of the QCL Fabry-Perot modes. Eg: Band-gap energy.

In summary, we have demonstrated nonlinear interaction within a QCL for optical sideband generation. We achieved a resonant effect that enhances the nonlinear susceptibility and permits frequency mixing, and demonstrated room-temperature operation. In addition to the significance of these results in terms of THz nonlinear optics, our device shows promise for a number of applications, including up-converting QCL emissions to the NIR, stabilizing the QCL emission, and all-optical wavelength shifting. Among these, all-optical wavelength shifting would have particular relevance for indium-phosphide-based QCLs, for which the bandgap lies in the telecom range and performances are considerably better than GaAs-based structures. Research in this area could lead to efficient sideband generation over the entire bandwidth of an optical fiber (i.e., >50THz). This would enable ultrafast wavelength shifting that could find application in current fiber telecommunication networks. We are now investigating these structures in more depth, and adapting them for efficient nonlinear interactions.