Titanium dioxide (TiO2) is a globally important material with a wide range of applications, including in the paint, cosmetics, and food industries. The microstructure of one of the mineral forms of TiO2, anatase, gives the material useful properties such as light trapping and photocatalysis, and hence anatase is of particular interest in optics and photonics research. This form of TiO2 can be synthesized using a sol-gel method—a process in which a colloidal solution of a molecular precursor is converted to a network polymer—producing a material with excellent mechanical and chemical stability over long periods of time. Here, we present the results of our research developing a sol-gel to fabricate simple and cost-effective TiO2 photoresists for photolithographic applications.1

Photoresists are light-sensitive materials used to fabricate patterned thin films on the microscale or sub-microscale (i.e., photolithography). There is a large range of photolithographic techniques available, and our sol-gel is compatible with a number of these. Compared with other photoresists, the increased stability of the patterned TiO2 thin films produced using this precursor means no post-processing (e.g., lift-off processes or etching) is required. Moreover, the density of the resulting TiO2 thin film can easily be adjusted with heat treatment to create a dense material with a high refractive index of up to 2.2. Without heat treatment, the material is porous with a low refractive index.

Our sol-gel TiO2 photoresist fabrication method is a five-step process. Initially, titanium tetraisopropoxide is polymerized in a mixture of methanol and butanol, producing an alcohol-insoluble (TiO)n network material. Alcohol-soluble benzoylacetone (BzAc) is added, which forms a complex with the titanium, resulting in a sol-gel. A film of the sol-gel is then deposited on a substrate. BzAc is very sensitive to UVA light, and hence when areas of the sol-gel film are exposed to UV illumination (using a 355nm laser) the BzAc degrades to alcohol-insoluble species such as carbonates and carboxylates. Finally, the remaining sol-gel in the non-illuminated areas is washed away with ethanol (i.e., development) leaving a patterned TiO2 negative photoresist.

We tested the sol-gel photoresist using four different photolithographic tools to print microscale and sub-microscale period gratings and other features. Initially, laser interference lithography—shown in Figure 1(a)—was used to print a TiO2 sinusoidal grating on a fused quartz substrate. In this technique, the period of the grating can be modulated by changing the angle between the two laser arms. We also used dynamic interferometric lithography—shown in Figure 1(b)—to fabricate a sub-micrometer diffraction grating.2 This photolithographic method uses a phase-mask—a transparent plate with areas of different thickness to create an interference pattern—suspended a few micrometers above the sol-gel photoresist-coated substrate. During the process, the substrate is moved under the phase-mask using a translation stage, gradually exposing the entire substrate to the interferogram illumination. This method produces a linear grating after development with ethanol. 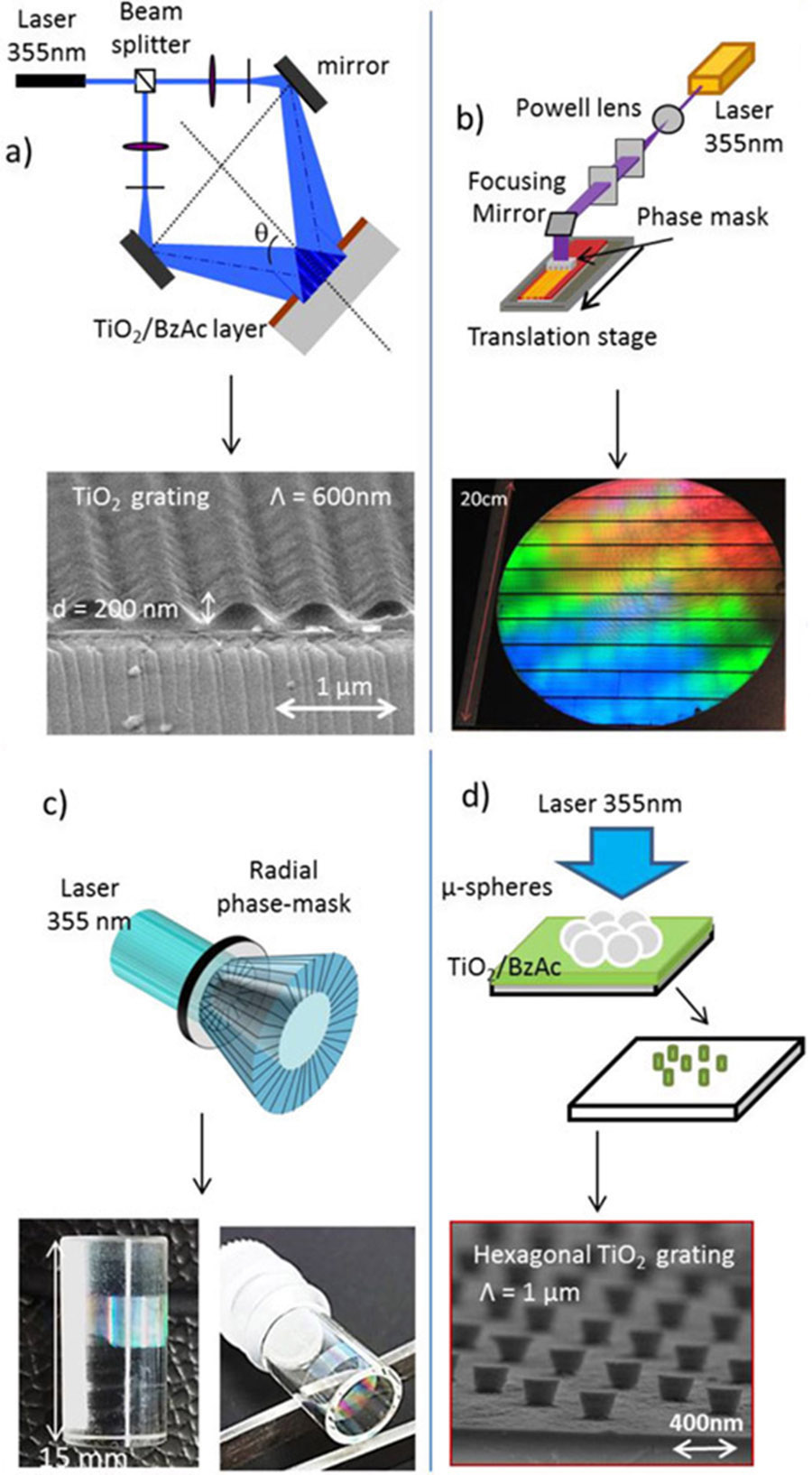 Additionally, we tested our sol-gel using radial phase-mask lithography: see Figure 1(c).3 This new photolithographic technique employs a radial phase-mask and the sol-gel photoresist to print linear gratings on the inner or outer walls of cylindrical substrates. Finally, microsphere lithography—shown in Figure 1(d)—was used to print a hexagonal array of TiO2 nanopillars.4 In this method, a layer of silica microspheres is deposited on the sol-gel photoresist in a hexagonal arrangement. Each of the microspheres acts as a convergent super-lens to create a photonic nanojet (i.e., a highly focused, high-intensity light beam) and, after development, the nanopillar array. Our sol-gel photoresist combined with any of these photolithography techniques could be employed in a range of applications, including photovoltaic cells, superhydrophobic surfaces, and low-friction devices.

We can modify the optical, electrical and mechanical properties of the patterned TiO2 thin films using ammonolysis to transform the dielectric and transparent TiO2 layer to a metallic titanium oxynitride (TiOxNy) layer. The ammonolysis process consists of heating the sample to 800–1000°C under a continuous flow of ammonia gas. The resulting TiOxNy films exhibit negative real permittivity values, and so can be considered for applications in plasmonic devices.

We fabricated a plasmonic device by printing a 1μm period linear grating into a sol-gel photoresist using a chromium photo-mask, followed by conversion of the resulting TiO2 grating to TiOxNy by ammonolysis: see Figure 2(a).5 The period of the grating was chosen to couple the IR wavelength of the incident light beam to the surface plasmons and create surface plasmon polaritons (a type of electromagnetic wave). We have both measured and modeled the output of the TiOxNy plasmonic device: see Figure 2(b) and (c). The signature of the plasmon mode is seen in the extinction in transverse-magnetic polarization—the magnetic field parallel to the grating lines—for particular wavelengths and angles of the incident beam. Although the TiOxNy film does not yet perform as well as gold or silver in plasmonic devices, the optical and electronic properties of the film can be modified by changing the ammonolysis conditions. Furthermore, the ability to directly print quasi-metallic gratings could lead to interesting and useful applications. 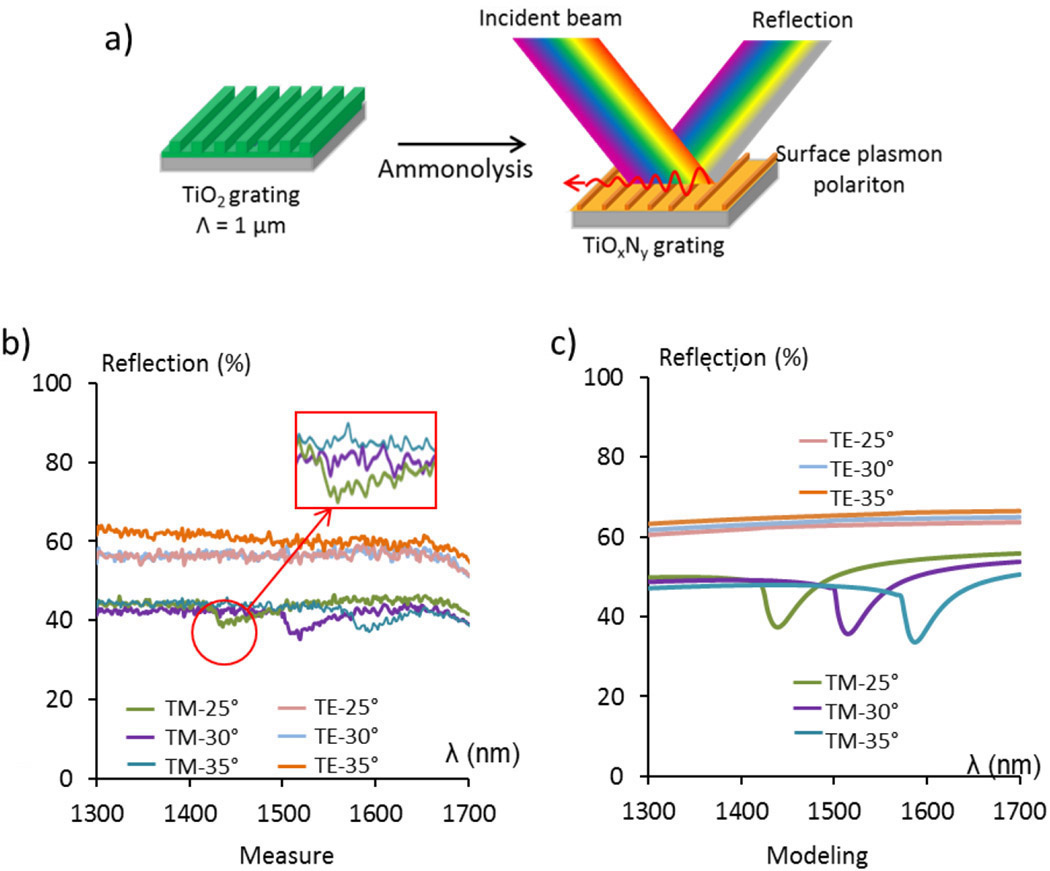 In summary, we have developed a sol-gel method to easily and cost-effectively fabricate TiO2 negative photoresists for photolithographic applications that does not require any post-processing. We have demonstrated that the process is compatible with a range of photolithographic techniques, including for non-planar and large substrates. Furthermore, the resulting patterned TiO2 films can be simply converted to metallic TiOxNy, which has potential applications in plasmonic devices. We are currently continuing our investigation into printing TiO2 gratings on non-conventional (non-planar) substrates such as cylinders—with which most photolithography tools are incompatible—using nanosphere lithography and radial phase-mask lithography.