Luminophores that consist of carbazolyl and benzonitrile moieties and are shielded by tert-butyl units, are included in novel blue molecules that exhibit high external quantum efficiencies and long lifetimes.
11 January 2017
Dongdong Zhang and Lian Duan

Since the pioneering work of Tang and VanSlyke in the 1980s,1 the prospect of using organic materials for organic LEDs (OLEDs) has flourished, as evidenced by the popular use of OLEDs in modern smartphones, flat-panel displays, and solid-state light-emitting applications. Despite such achievements, the insufficient lifetime of blue OLED devices remains a problem in many applications.2 Although thermally activated delayed fluorescence (TADF) emitters—with high external quantum efficiencies (EQEs)—have recently been proposed as an alternative to blue emitters,3 the lifetimes of these devices are still far from satisfactory.

For example, a device based on a well-known blue TADF emitter, i.e., 10,10 ′ -(sulfonylbis(4,1-phenylene))bis(9,9-dimethyl-9,10-dihydroacridine), has a maximum EQE of only 19.5% and a time to reach 50% of the initial luminance (T50) of only one hour (for an initial luminescence of 500cd/m2).4 In more recent work, stable blue TADF devices (based on derivations of triazine/dicarbazolylbenzene) have been shown to exhibit a T80 (i.e., the time to reach 80% of initial luminance) of 52 hours at 500cd/m2. Nevertheless, this device still has an EQE of only about 2%.5 Furthermore, in separate work, it has been reported that triplet–polaron annihilation (TPA) may lead to the degradation of OLEDs during their continuous operation.6 Considering the distance-dependence of the energy transfer that takes place from the triplet to polarons, increasing the intermolecular separation in OLEDs (by addition of steric bulk to the dopant molecules) may be a way to reduce the TPA and increase the device lifetime.7

On the basis of these previous studies, in our work we have designed and synthesized blue TADF luminophores that are sterically shielded by tert-butyl units (e.g., see Figure 1).8 In our blue and sky-blue TADF emitters we also incorporate cyano and carbazolyl units as the electron-withdrawing and electron-donating moieties, respectively. With our introduction of the tert-butyl units we can thus efficiently increase the intermolecular distance and reduce the TPA in our TADF devices. In this way, we can achieve high-efficiency OLED devices that have simultaneously improved stability. 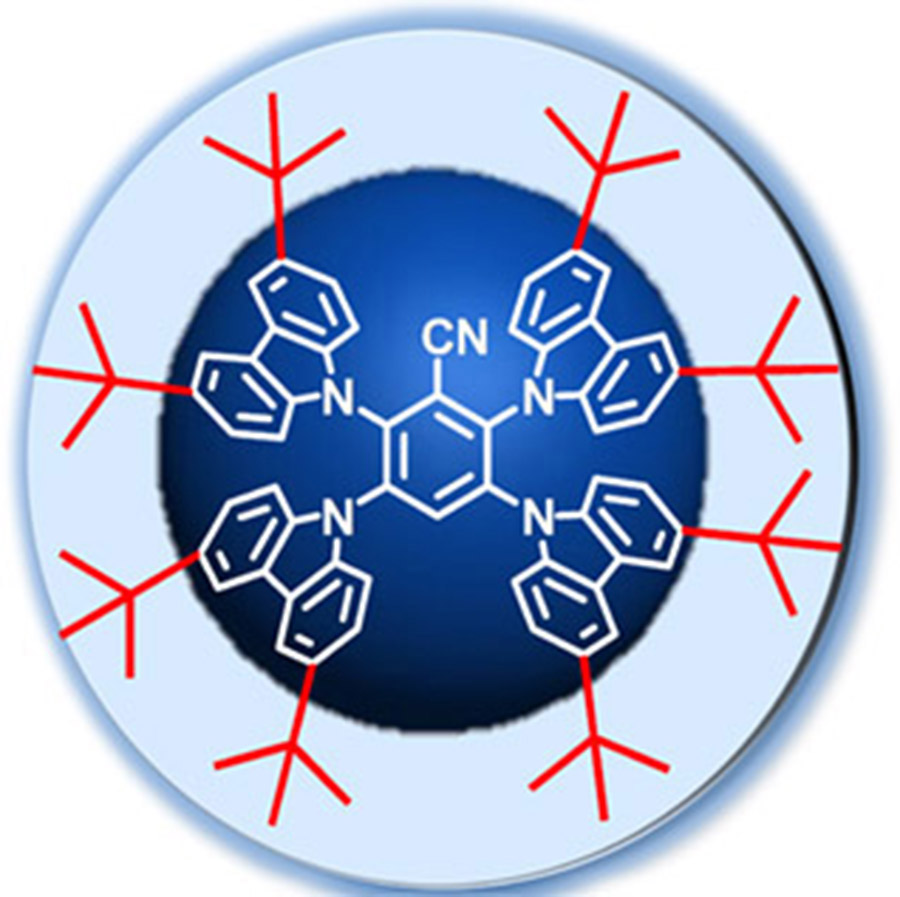 We compare the molecular structures, as well as the energy levels of the highest occupied and the lowest unoccupied molecular orbitals (i.e., the frontier orbitals) of our novel emitters—4TCzBN and 5TCzBN (where T, Cz, and BN denote the tert-butyl, carbazolyl, and benzonitrile moieties, respectively)—with those of 4CzBN and 5CzBN (i.e., which do not contain the tert-butyl units) in Figure 2. We find that the 4TCzBN and 5TCzBN are almost delocalized from the carbazolyl and benzonitrile moieties, i.e., extending to the tert-butyl units. It is well known that the transitions of emitters occur in the frontier orbitals. Our results therefore indicate that the tert-butyl units mainly act as an encapsulation shell that surrounds the luminophore in 4TCzBN and 5TCzBN. As we anticipated, this encapsulation shell thus causes an increase in the intermolecular separation between the luminophore and nearby molecules. Furthermore, the introduction of tert-butyl units reduces the singlet–triplet splitting (ΔEST) of the compounds, which gives rise to a more efficient reverse intersystem crossing (RISC) process. 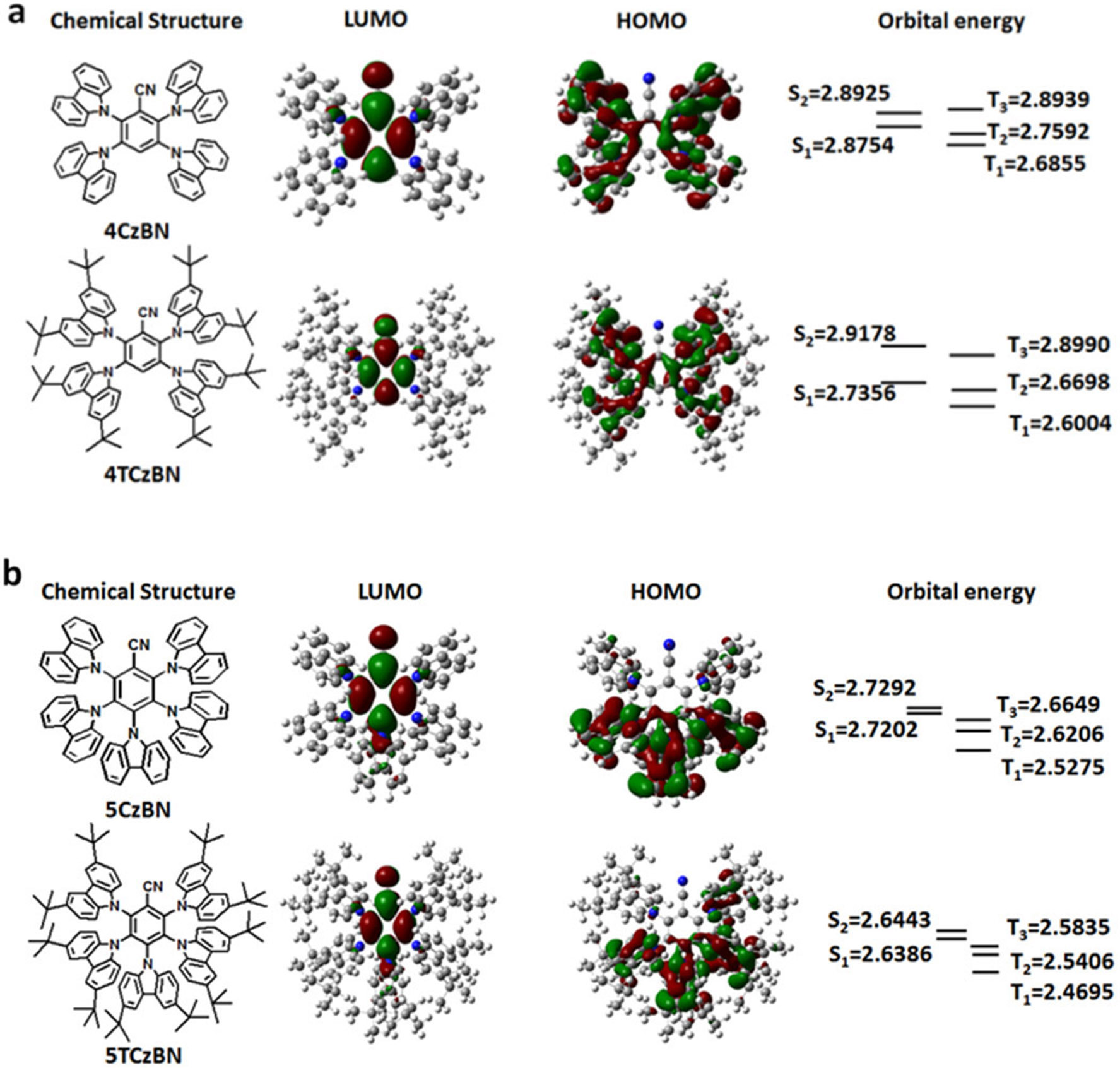 In our work we have also fabricated OLED device structures—see Figure 3(a)—that incorporate our blue TADF emitters. We have characterized the electroluminescence spectra of these devices, as well as their brightness: see Figure 3(b) and (c), respectively. We have also measured the EQEs—see Figure 3(d)—of these devices and found that the maximum value for the 4CzBN, 4TCzBN, 5CzBN, and 5TCzBN devices were 10.6, 16.2, 16.7, and 21.2%, respectively. These values are among the highest efficiencies yet achieved for OLEDs based on blue TADF emitters.9 The higher efficiencies of the 4TCzBN and 5TCzBN devices (relative to the 4CzBN and 5CzBN devices, respectively) arise because of their higher photoluminescence efficiencies and because of the more-efficient RISC process (a result of the smaller ΔEST). 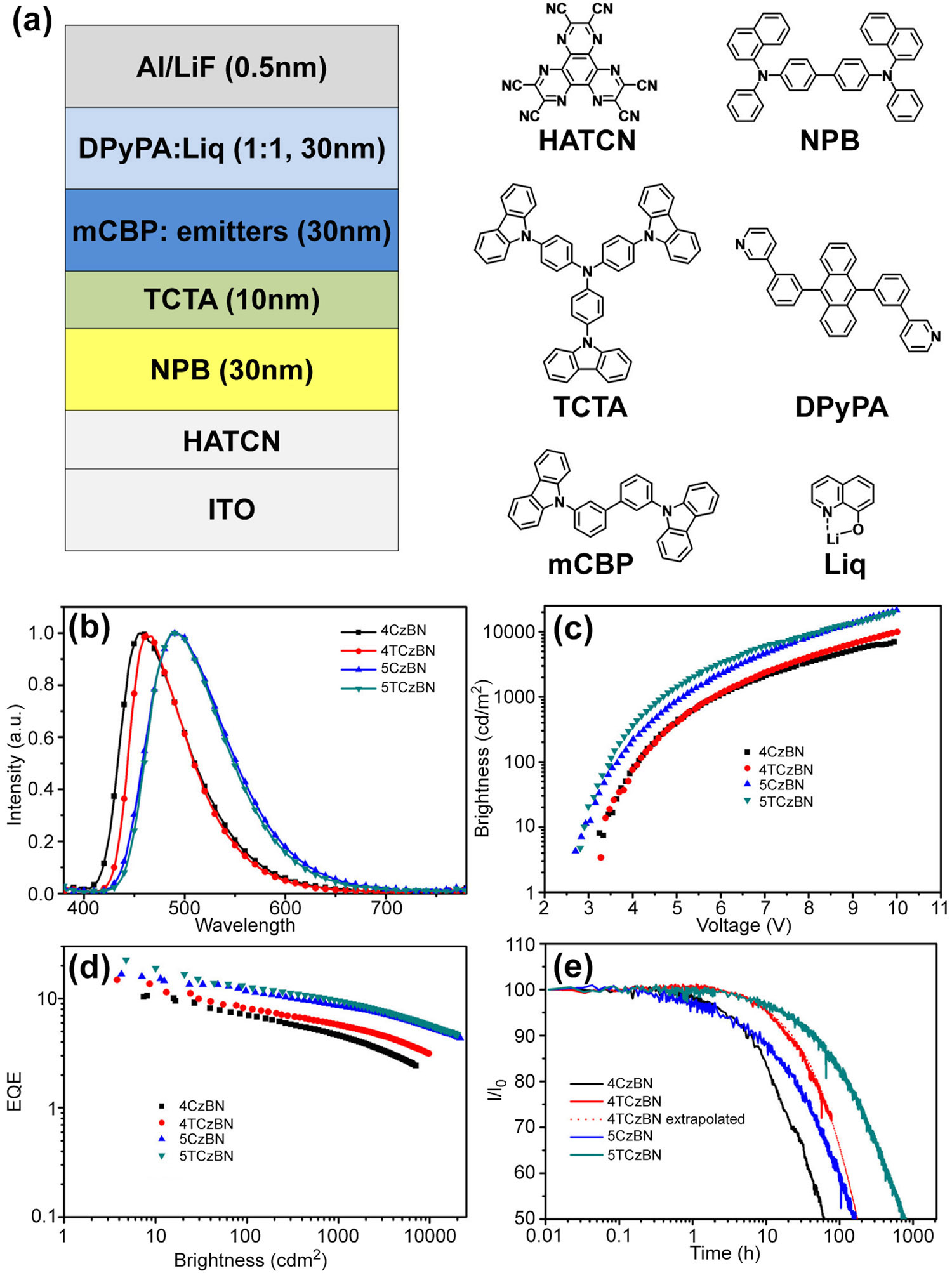 Figure 3. (a) Schematic structure of the fabricated organic LED devices (left) and the molecular structures of the different components (right). Al/LiF: Aluminum/lithium fluoride electrode. DPyPA: 9,10-bis(3-(pyridin-3-yl)phenyl)anthracene. Liq: Liquid. mCBP: 3,3-di(9H-carbazol-9-yl)biphenyl. TCTA: Tris(4-carbazoyl-9-ylphenyl)amine. NPB: N,N'-bis(1-naphthalenyl)-N,N'-diphenyl-[1,1'-biphenyl]-4,4'-diamine. HATCN: Dipyrazino[2,3-f:2',3'-h]quinoxaline-2,3,6,7,10,11-hexacarbonitrile. ITO: Indium tin oxide electrode. The TADF emitters are incorporated into the mCBP layer of the structure. (b) Electroluminescence spectra of the constructed 4CzBN, 4TCzBN, 5CzBN, and 5TCzBN LED devices, measured across the 380∼780 spectral range at a voltage of 6V. a.u.: Arbitrary units. (c) Current density (brightness) as a function of voltage of the LED devices. (d) External quantum efficiency (EQE) as a function of the LEDs' current density. (e) Lifetime of the LED devices, as measured at an initial luminance (l0) of 500cd/m2. l: Luminance.

In addition, we examined the operation lifetime of our OLEDs, at an initial brightness of 500cd/m2 and under a constant current. Our results—see Figure 3(e)—show that the T50 results for the 4CzBN, 4TCzBN, 5CzBN, and 5TCzBN devices are 62, 167, 176, and 770h, respectively. In most display applications, the device lifetime of blue emitters is usually measured at an initial luminance of 100cd/m2. Therefore, by adopting a degradation acceleration factor (which relates luminance to lifetime), we extrapolate a lifetime of 12,873h (at an initial luminance of 100cd/m2) for the 4TCzBN device. These values are much better than those that have previously been reported for blue TADF devices,4 and they are close to the best for blue phosphorescent devices that have a single-stack structure.10

In a separate part of our work, we have attempted to reduce the efficiency roll-off of our devices. In particular, by optimizing the electron-transporting material, we were able to greatly suppress the efficiency roll-off of our 5TCzBN device. That is, we maintained a high EQE at increased luminance levels. We measured the EQE of the device as 21.2 and 17.8% at 1000 and 5000cd/m2, respectively, and a maximum EQE of 21.3%. Moreover, by using hosts that have small singlet–triplet splitting in the 4TCzBN device, we achieved a record-low voltage of 4.9V (at a practical luminance of 1000cd/m2).11

In summary, by introducing steric bulk to blue TADF emitters, we have realized OLED devices that have high efficiency and improved stability. Indeed, we achieve an EQE as high as 21.2% and a record-long T50 of 770h at an initial luminance of 500cd/m2 (which corresponds to a half-lifetime of 12,873h at 100cd/m2). This is the first time that high efficiency and long-term stability have been obtained simultaneously in a single blue-TADF-emitter-based device. In the next stages of our work we plan to use our approach to design and synthesize highly efficient and stable deep-blue TADF emitters.