An improved analysis method shows that Auger recombination and series resistance are the major causes of wall-plug efficiencies of less than 40%.
03 March 2017
Joachim Piprek

The increasing market penetration of solid-state lighting (SSL) applications is underlined by the prevalence of modern light-emitting diode (LED)-based light bulbs in many places. These LEDs are made of gallium nitride (GaN) and related semiconductors, which can efficiently emit blue light. Their inventors received the Nobel Prize in physics in 2014 for “enabling bright and energy-saving white light sources.” In his Nobel lecture in Stockholm, Shuji Nakamura predicted that GaN-based laser diodes may soon replace LEDs.1 Such lasers are already implemented in the headlights of some high-end cars. However, the main driving force behind SSL is the promise of high energy efficiency, which is typically measured by the wall-plug efficiency (WPE), the fraction of the electrical input power that is emitted as light output power. Some GaN-based blue LEDs achieve more than 80% WPE,2 but the highest WPE reported for GaN-based laser diodes is still below 40%.3, 4 The poor efficiency of the laser diodes puzzles researchers worldwide.

To achieve a deeper understanding of this efficiency deficit, we have used an advanced laser simulation to analyze the record-high power output of GaN lasers reported by Panasonic.3 These device's peak lasing power of 7.2W occurred at 4A injection current and 6.3V bias. The Panasonic researchers achieved this high output by reducing thermal resistance and internal optical absorption to record-low levels. Even for these lasers, however, the measured WPE remains below 40% (see Figure 1). 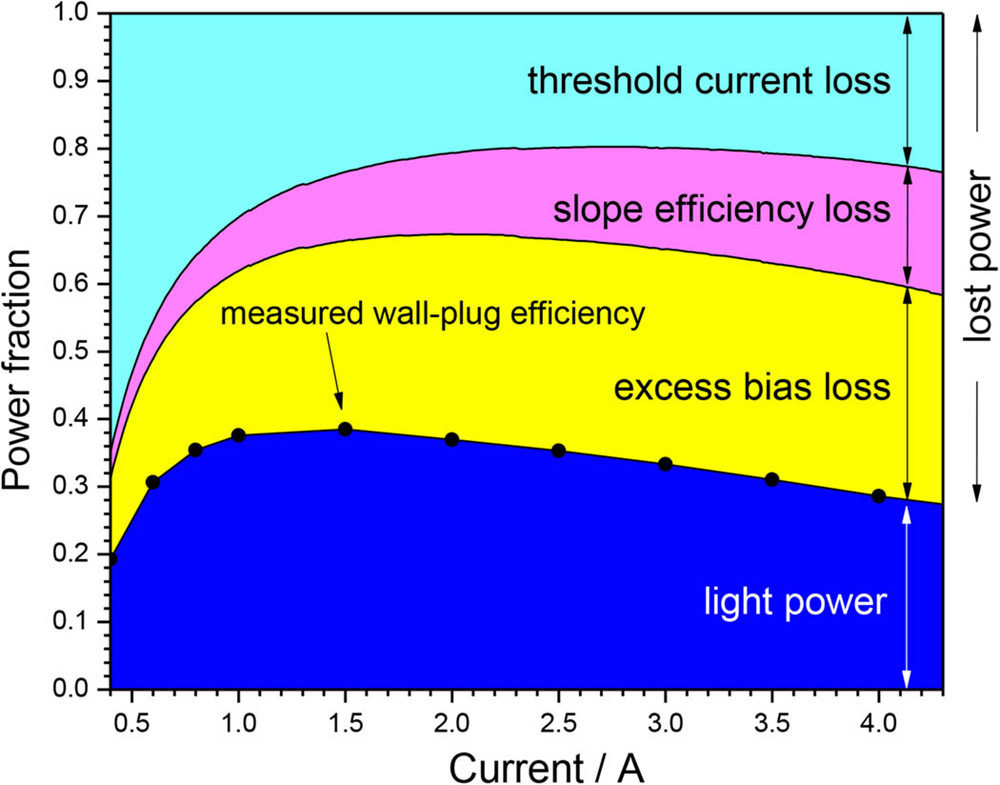 In an earlier analysis of the reported measurements, we identified the high series resistance of the lasers as the main reason for their low WPE.5 In contrast to GaN LEDs, lasers need relatively thick p-doped aluminum gallium nitride (AlGaN) waveguide cladding layers, which have extremely low electrical conductivity. In that previous work, we employed a simple efficiency model that is typically used to analyze high-power lasers.6 One of the key assumptions of the model is that the threshold current for lasing remains constant with rising current injection. The predominant contribution to the threshold current of GaN lasers is strong Auger recombination inside the quantum wells (QWs). Accepting the simple efficiency model therefore leads to the commonly held opinion that Auger recombination is negligible at high laser power.1, 4,5 However, our more recent studies7 show that this conclusion is incorrect. 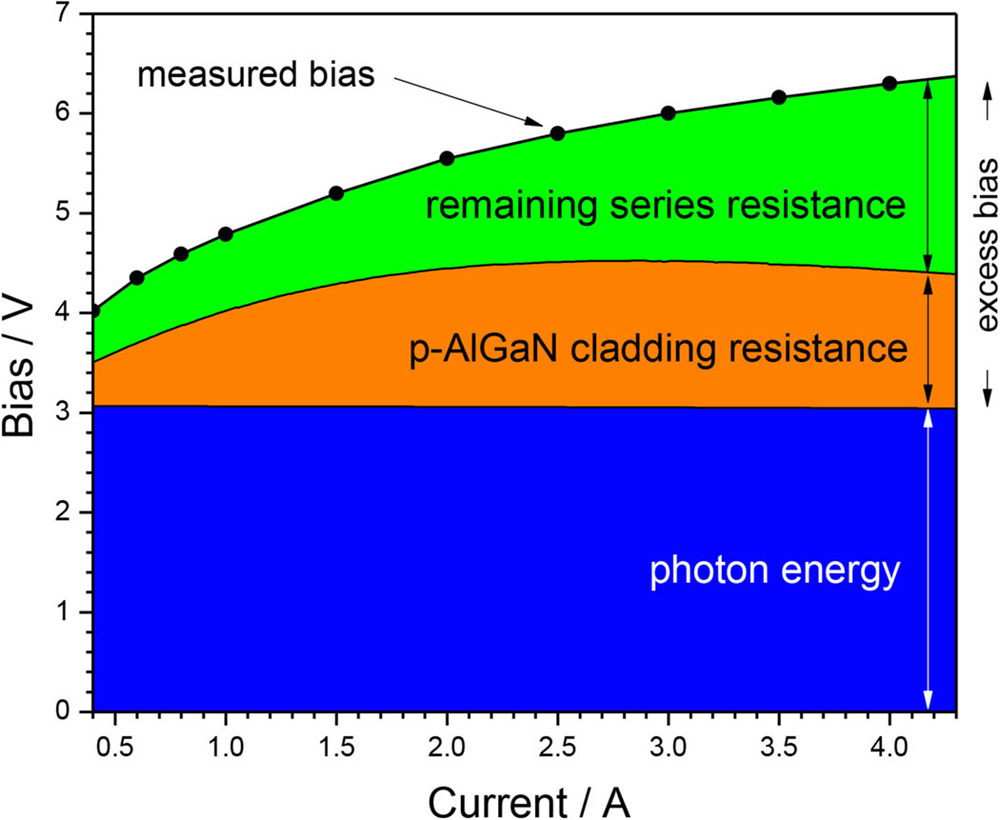 Figure 2. Simulated contributions to the measured bias (dots) of the GaN laser diode (above lasing threshold). The minimum bias is given by the photon energy of the emitted light (blue region). The excess bias is caused by series resistance due to the relatively thick p-doped aluminum gallium nitride (p-AlGaN) waveguide cladding layer (orange) and the device's contacts and substrate (green).

Figure 1 depicts how the power budget of the laser changes with increasing current injection above lasing threshold. The dark-blue area representing the emitted laser light corresponds to the measured WPE. The peak efficiency of about 39% is reached at a relatively low current near 1.5A. The peak output power of 7.2W was reported at 4A with a WPE of less than 30%. In other words, more than 70% of the electrical input power is wasted, mainly through heat generation by various loss mechanisms. At high current, the largest power loss is attributed to the series resistance (excess bias loss in Figure 1). The second-highest loss is caused by Auger recombination (threshold current loss), which dominates the power budget at lower current. The smallest power loss is caused by optical absorption and electron leakage (slope efficiency loss).

In striking contrast to the simple efficiency model discussed above, the advanced laser simulation indicates that the Auger recombination intensifies at high current and contributes significantly to the declining WPE. The Auger recombination intensifies because the carrier density inside the QWs grows as the injection current increases, contradicting the common assumption that the threshold carrier density remains constant above threshold.9 This rise in the carrier density is caused by the strong self-heating of the laser, which lowers the optical gain provided by the QWs. To maintain lasing therefore requires an increased threshold carrier density so that all optical losses are compensated. Consequently, the threshold current also rises with higher injection current.

Nevertheless, the main reason for the limited efficiency of this laser is the high excess bias. Figure 2 shows different simulated contributions to the measured bias. The minimum required bias for the device is given by the photon energy of the emitted light. Any bias above the photon energy is considered excess bias.6 Somewhat surprisingly, our simulation shows that the contribution of the p-doped AlGaN cladding layer shrinks at high current. We attribute this effect to the strong self-heating of the laser, which enhances the conductivity by activating more carriers.7 The remaining series resistance is mainly caused by the contacts and substrate, which cannot be separated unambiguously in this case.

In summary, we have revealed the major causes of the efficiency deficit of GaN-based laser diodes, namely high series resistance and strong Auger recombination. We accomplished this by using an advanced laser simulation method to analyze previously obtained measurements from GaN lasers that have record-high power outputs. In particular, we considered the thermally induced rise of the threshold current. We propose that efficiency analyses of high-powered lasers should consider this effect instead of routinely assuming a constant threshold current.9 Based on our findings, we hope to develop promising strategies for substantial improvements in GaN laser efficiency.7, 10