Reducing the roughness of 3D micro-optics

Polymer microlenses are used in various modern devices, including high-manufacturing-volume products such as mobile smartphones. Since these lenses are so small, they have to be processed with the use of novel 3D lithographic methods such as two-photon direct-write laser (2PP-DWL) lithography. With such techniques, a scanning approach is used to build the lenses out of thin, discrete layers, i.e., a laser beam is scanned through the photosensitive material.1, 2 The trajectories and layering during such DWL processes, however, often give rise to roughness (in the range of the writing increment, i.e., 100–200nm) that causes adverse effects for optical applications (it is typically much more desirable to achieve sub-20nm roughness levels for transmission with a low amount of stray light).

Surface smoothing is thus often required, which can be achieved through various techniques. Most of these approaches involve optimization of the writing strategy. For instance, a small increment of overlapping trajectories reduces roughness. The excessive writing time required, however, is not acceptable for current micro-optical systems. In contrast, increasing the overlap of two adjacent beams (e.g., by blurring the writing beam or by using special resists) compromises the high-resolution capabilities of 2PP-DWL and is particularly useful for systems with low-aspect-ratio structures.3, 4 If a surface has to be subsequently smoothed out, a polishing method is thus required. Such post-processing steps, however, must only modify the surface and not change the structural details or the overall shape.

We have thus developed a new method for the fabrication of micro- and nanoscale lenses. Our technique—known as thermally activated selective topography equilibrium (TASTE)—works particularly well with thermoplastic polymers such as poly(methyl methacrylate), PMMA,5, 6 and involves selective modification of material properties in only part of the sample of interest (i.e., regions that are locally confined in the lateral or vertical direction). In this work,7 we used the 2PP-DWL technique to fabricate concave microlenses out of a viscous resist material known as IpDip. These lenses have continuous contours, with structures that are up to 50μm high. In addition, there are deep central sags (surrounded by high-aspect-ratio tips) between adjacent lenses in our array configuration (see Figure 1). 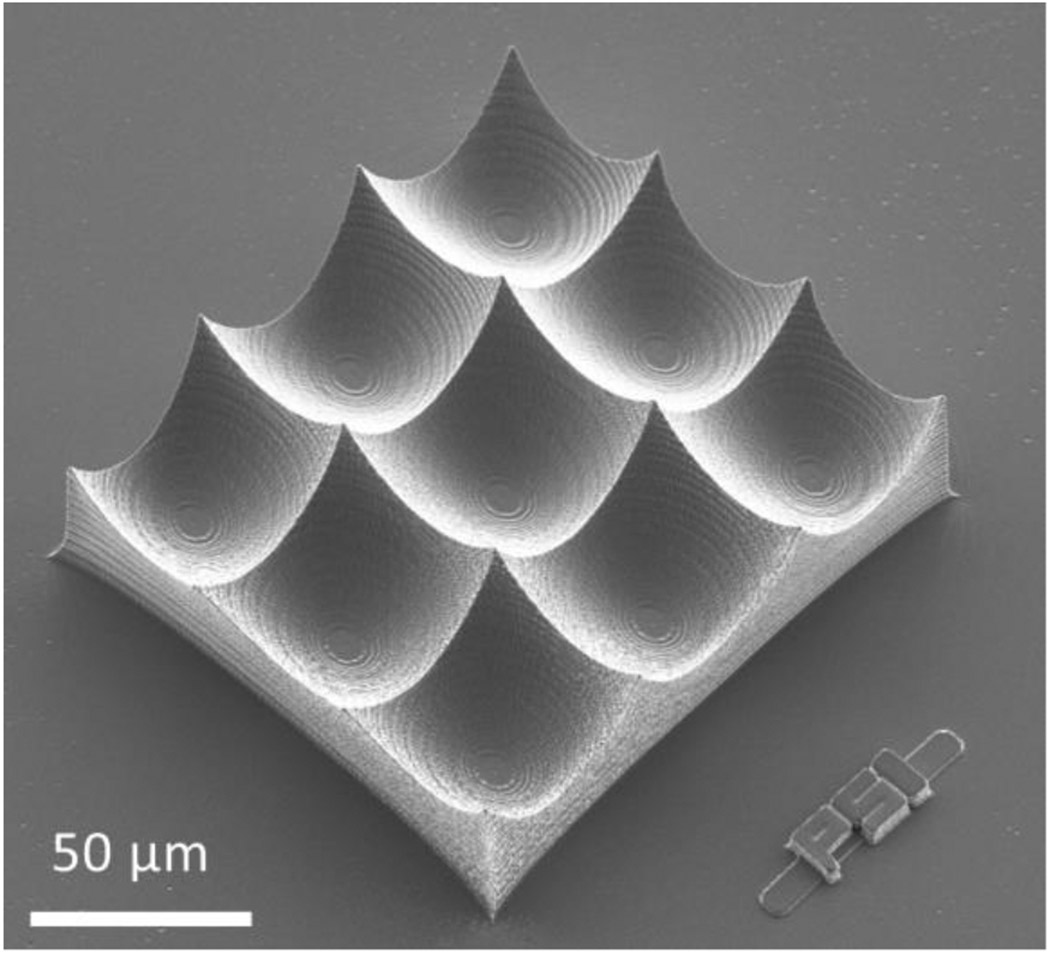 During our fabrication process, the IpDip only solidifies where the beam has the highest intensity (i.e., in a 200 × 200 × 600nm voxel).5 Since the IpDip—a crosslinked negative resist—does not allow for direct smoothing in a post-processing step (see Figure 2), we copied the original (master structures) into the PMMA. To do this, we first replicated the master structure in UV-curable silicone rubber poly(dimethyl siloxane), PDMS, and then made a thermal imprint of it in the PMMA. The resulting topography of the structure is almost identical to the IpDip master (despite the elastic properties of the PDMS).1 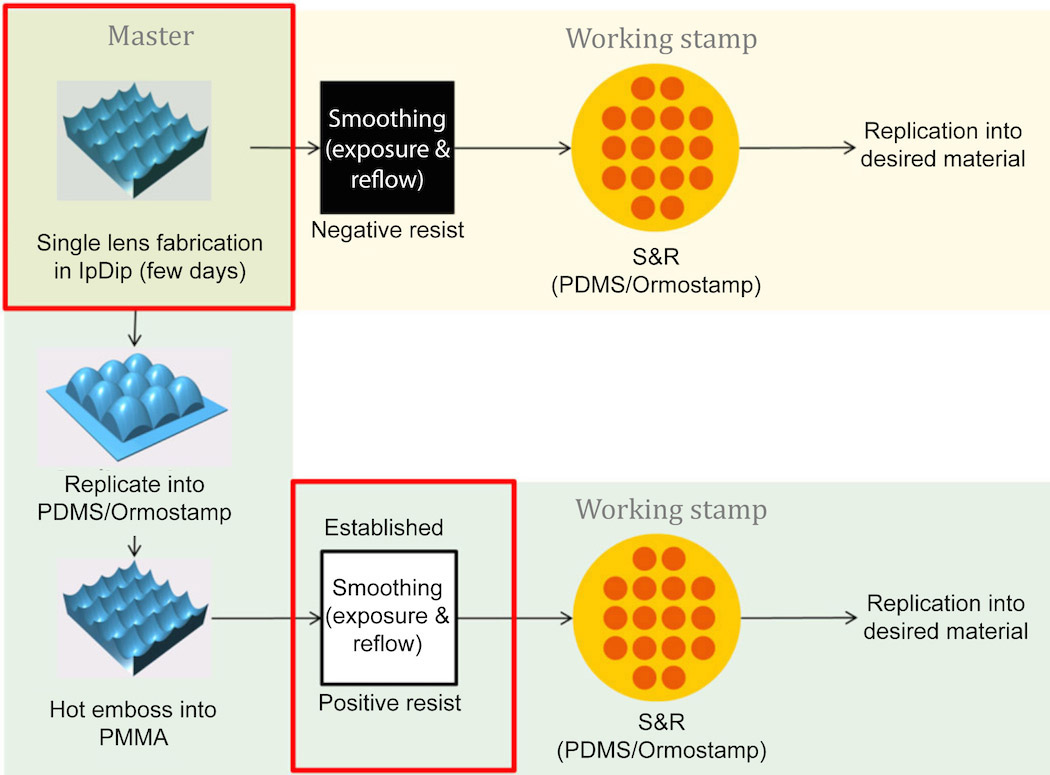 Figure 2. Schematic illustration of the process routes for replication of microlens arrays that are realized with 2PP-DWL lithography in negative-tone resist materials (e.g., IpDip). Copying the original (master) structure into a thermoplastic material, such as poly(dimethyl siloxane)—PDMS—or Ormostamp, enables the use of the thermally activated selective topography equilibrium (TASTE) process in a post-exposure thermal reflow. The optical elements with a smoothed surface can then be used for further upscaling into a working tool, through step and repeat (S&R) imprinting. PMMA: Poly(methyl methacrylate).

We have also tested our TASTE approach with different methods (i.e., using electrons, plasmas, UV light, and x-rays) that are known to be suitable for defined modification of PMMA.8 By exposing the polymer to such high-energy probes, the material is modified (‘damaged’) to a specific depth, via chain scission. The resulting lower molecular weight of this part of the material means that the glass transition temperature (Tg), i.e., at which the polymer becomes viscous, is reduced by several degrees. By choosing a temperature below the Tg of the non-exposed PMMA, but above that of the exposed material, we can ensure that softening and material displacement (reflow) only occurs in the region of the damaged surface. For surface smoothing of microlenses and prisms, we found that 172nm vacuum UV (VUV) light exposure is ideal for this application (i.e., with PMMA). The damage of the micro-optical lens surface can be restricted to a depth of a few hundred micrometers because the VUV light has a high absorption in PMMA. We are thus able to remove a roughness of 100nm, while preserving the concave shape of the lenses (i.e., with 50μm structures and deep central sags), as shown in Figure 3. We have also optically confirmed this result for an array that has more than 200 microlenses. The optical performance of the smoothed 200 microlens array is substantially better than the non-smoothed version. 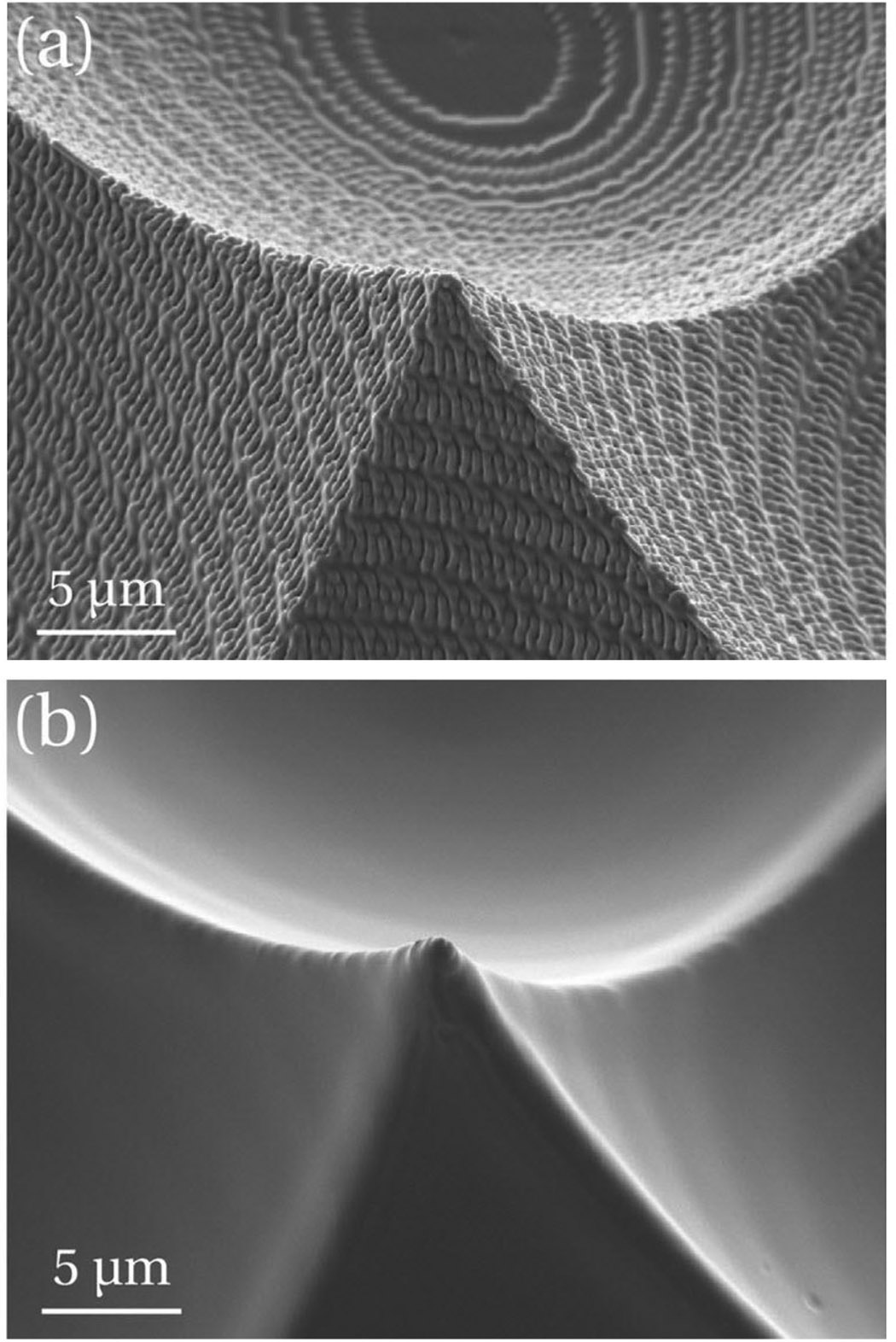 Figure 3. SEM image of a high-aspect-ratio tip, which constitutes the intersection between adjacent microlenses in the PMMA matrix (a) before and (b) after reflow. Only when surface selective modification of the polymer is conducted (i.e., using the TASTE process) can the 100nm-scale roughness be smoothed out while preserving the sub-μm structural details.

An advantage of using 172nm VUV is that our technique can be performed as a flood exposure at ambient conditions. Furthermore, the VUV can be combined with masking (i.e., stencil, binary absorption, or grayscale) so the surface-sensitive reflow can thus be laterally confined. In addition, our TASTE process is efficient for PMMA with different molecular weights and can probably be applied to a range of other materials for which Tg reduction occurs by chain scission. Our method of post-processing also means that writing of typical microlenses in handheld devices can be achieved with large increments, and in a reasonably short time. The processed structures that we produce can thus be used for upscaling, i.e., by copying the masters into working stamps.

In summary, we have developed a new post-processing technique for the fabrication of smoothed microlenses. We have demonstrated that our TASTE methodology works particularly well with VUV light for a PMMA lens array. The roughness that we obtain is much lower than the A-1 standard (defined by the Society for the Plastics Industry) for plastic molds. In our future work we plan to directly modify the original 2PP resist that we use in our approach, so that reflow of crosslinked materials is enabled.

Robert Kirchner studied electrical engineering at the Technische Universität Dresden (Germany) and Chalmers University of Technology (Sweden). After competing his PhD in Dresden, he joined the PSI as a postdoctoral researcher in 2013.

Nachiappan Chidambaram obtained a master's in materials engineering from the Indian Institute of Science. After completing his PhD in materials science and engineering at the # Ecole Polytechnique Fédérale de Lausanne (Switzerland), he joined PSI as a postdoctoral researcher in 2015.

Helmut Schift is head of the Polymer Nanotechnology Group. He studied electrical engineering and obtained a PhD in mechanical engineering at the University of Karlsruhe, Germany. He joined PSI as a research staff member in 1994.