Enhancing the efficacy of photodynamic therapy for cancer treatment

In a two-step procedure, a low level of lysosomal photodamage can markedly increase damage to mitochondrial sites.
19 June 2017
David Kessel

Photodynamic therapy (PDT) is thought to be a more selective approach for eradicating cancer tumors than more traditional treatments (e.g., surgery and ionizing radiation). In PDT, malignant cells and their surrounding environments are selectively photodamaged to induce the destruction of tumor cells, as well as to prompt other therapeutic effects (including stimulation of immunologic anti-tumor cells). The widespread implementation of PDT in clinical practice, however, has not yet been realized because the necessary scientific basis and rationale has not been established. Nonetheless, it has been suggested that there is a synergistic interaction between PDT and some chemotherapeutic regimens.

As part of these ongoing efforts, a number of different chemotheraphy drug combination protocols that include PDT are currently being developed. For example, it has been previously shown1 that a sequential PDT protocol involving two photosensitizing agents was more effective than either of the sensitizers alone for eradicating large tumors in a mouse model. Moreover, it was found that the order of activation was critical. Specifically, it was necessary for lysosomal photodamage—caused by 5-ethylamino-9-diethylaminobenzo[a]phenothiazinium2—to take place before mitochondrial destruction, mediated by a benzoporphyrin derivative (BPD).3

In our work on a number of different cell-culture systems, we have investigated the mechanism of this PDT activation order effect.4–8 Our work leads on from a study in which it was suggested that a specific autophagy-related protein (autophagy protein 5, ATG5) can be cleaved by the protease calpain to form a pro-apoptotic (i.e., cell-killing) product (tATG5).9 Indeed, it has been suggested that the upregulation of ATG5 formation10 may give rise (partly) to a synergistic interaction between PDT and some chemotherapeutic regimens.11, 12 In particular, we propose that the release of calcium ions from lysosomes (which leads to calpain activation) is the first step in this process (see Figure 1). 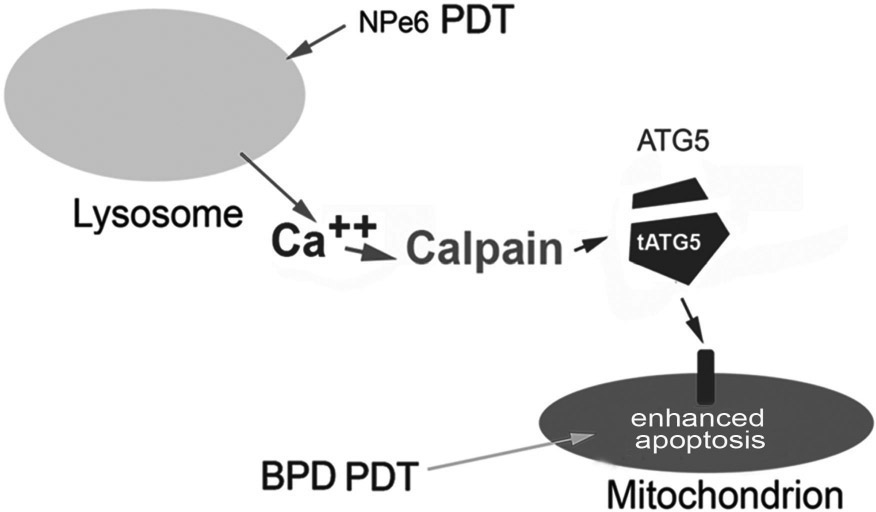 Figure 1. Schematic representation of the proposed mechanism to explain the photodynamic therapy (PDT) activation order effect. The release of calcium ions (Ca++) from lysosomes is caused by the photoactivation of N-aspartyl chlorin e6 (NPe6). This must occur before the mitochrondrial effects, which are caused by the photoactivation of a benzoporphyrin derivative (BPD). The ATG5 protein can be cleaved by calpain (a protease) to form a pro-apoptotic product (tATG5).

In our initial studies, we activated the photosensitizers that produce the lysosomal and mitochondrial photodamage separately. To do this we used 660 and 690nm light individually or sequentially to photoactivate BPD and N-aspartyl chlorin e6 (NPe6), respectively. We treated 1c1c7 (murine hepatoma) cells with these photosensitizers for 1 hour and then replaced the media. In separate work, we have also examined the effect of Photofrin (a photosensitizing agent approved by the Federal Drug Administration) and of a calpain antagonist (ALLN).13 For those experiments, the 1c1c7 cells were treated with the agents for 16 hours and for 1 hour, respectively, before irradiation (we also placed the Photofrin-loaded cells in a fresh medium for 1 hour to remove readily diffusible components).

Our measured clonogenic survival results (see Table 1) showed that as the time between the 660 and 690nm irradiation increased, the ability of the lysosomal photodamage to promote photokilling with BPD decreased (i.e., indicating the gradually diminishing effect of tATG5). We also found that simultaneous irradiation of both photosensitizers (with the use of broadband light) was as lethal as our sequential protocol when there was no gap between the irradiation intervals. In addition, the use of ALLN appears to markedly reduce the efficacy of both of our combination protocols.

Table 1. Clonogenic survival (expressed as a mean ±the standard deviation of three determinations) of 1c1c7 (murine hepatoma) cells after different PDT protocols (as well as for an untreated control sample). The tested protocols include the use of a calpain antagonist (ALLN), BPD, NPe6, as well as NPe6 followed by BPD and by BPD or ALLN. Values marked * and ** are different from the controls with a significance of <0.05 and <0.001, respectively.

Our experimental results (see Table 2) also show that a very low level of lysosomal photodamage can still have a significant effect on the efficacy of PDT directed specifically at mitochondria. Furthermore, our use of simultaneous irradiation substantially increases the level of photokilling. This suggests that the efficacy of Photofrin may arise from its ability to cause photodamage to both sites.7 Photofrin, however, has a relatively poor absorption profile (the longest wavelength in its absorbance spectrum is 630nm), which is not ideal for maximal penetration of light into tissues.14, 15 The successful use of Photofrin for cancer control may therefore depend more on its subcellular targeting profile than on other factors.

Table 2. Clonogenecity of 1c1c7 cells after low-dose PDT, directed specifically at lysosomes to promote subsequent photokilling of mitochondria. The cells were incubated with both photosensitizing agents (i.e., NPe6 and BPD) and then irradiated either with only 660 or 690nm light, or with 660 and 690nm light sequentially. The results are given as the mean and standard deviation of three experiments. The BPD results are significantly different from the untreated control results (at a level of <0.05).

In summary, we have conducted a number of cell-culture experiments to investigate the mechanisms that underlie PDT for cancer treatment. Our clonogenic survival results indicate that the photokilling effect of tATG5 gradually decreases with increasing periods between lysosomal and mitochondrial photodamage. Although the use of ALLN dramatically reduces the efficacy of our photosensitizer combination protocols, Photofrin is suitable for use as either the first or second photosensitizing agent in our procedure. In our current work, we are exploring death pathways that are enhanced by the combination PDT approach. Although apoptosis is involved, it appears that the effects of endoplasmic reticulum stress are also a factor.

David Kessel has been involved in research relating to photodynamic therapy since the late 1970s.