Most modern imaging systems function in a parallel acquisition scheme.1, 2 For example, the ubiquitous digital optical cameras of today employ arrays of pixels that each detect local light intensity, and simultaneously generate proportional electrical signals to construct an image. However, assembling the large quantities of detectors that are required for parallel imaging is not always feasible for other frequencies of light. In particular, there is a gap in current technology ranging from about 0.1 to 10 terahertz (THz), often referred to as the ‘terahertz gap.’3 Here single-pixel imaging may be advantageous: only one detector is used, with a spatial light modulator (SLM) to serially acquire many measurements of a scene. Metamaterials (i.e., engineered materials) enable the construction of high-performance SLMs because their electromagnetic properties can be designed via unit cell geometry.

Until recently, single-pixel imaging was inherently slow because it necessitates making a number of serial measurements equal to the number of pixels in the final image. Compressive sensing is a prominent approach that seeks to increase acquisition speeds by reducing the number of measurements made by the single pixel detector. However, the image reconstructions from compressive measurements can be computationally expensive (NP-hard).5 Further, the measurement process remains serial, meaning that acquisition time is still directly proportional to the desired image size.

We developed an efficient single-pixel imaging system enabled by a metamaterial SLM6 whose pixels' absorption peak can be dynamically brought high or low via applied bias voltage with great speed and precision. Light from a THz source passes through the object to be imaged and is focused onto the metamaterial SLM (see Figure 1).7 Each pixel oscillates between high and low absorption at frequency fmod with a specific phase, either 0 or π, a technique known in communications engineering as binary phase-shift keying (BPSK).8 The spatial pattern of 0 and π phases—or the ‘mask’—is, in our case, given by a row of a Hadamard matrix, shown to be optimal in single-pixel imaging.9 The light from each SLM pixel is then focused into the single-pixel THz detector, where the summed phase and amplitude of the signal are read by a lock-in amplifier detection scheme. 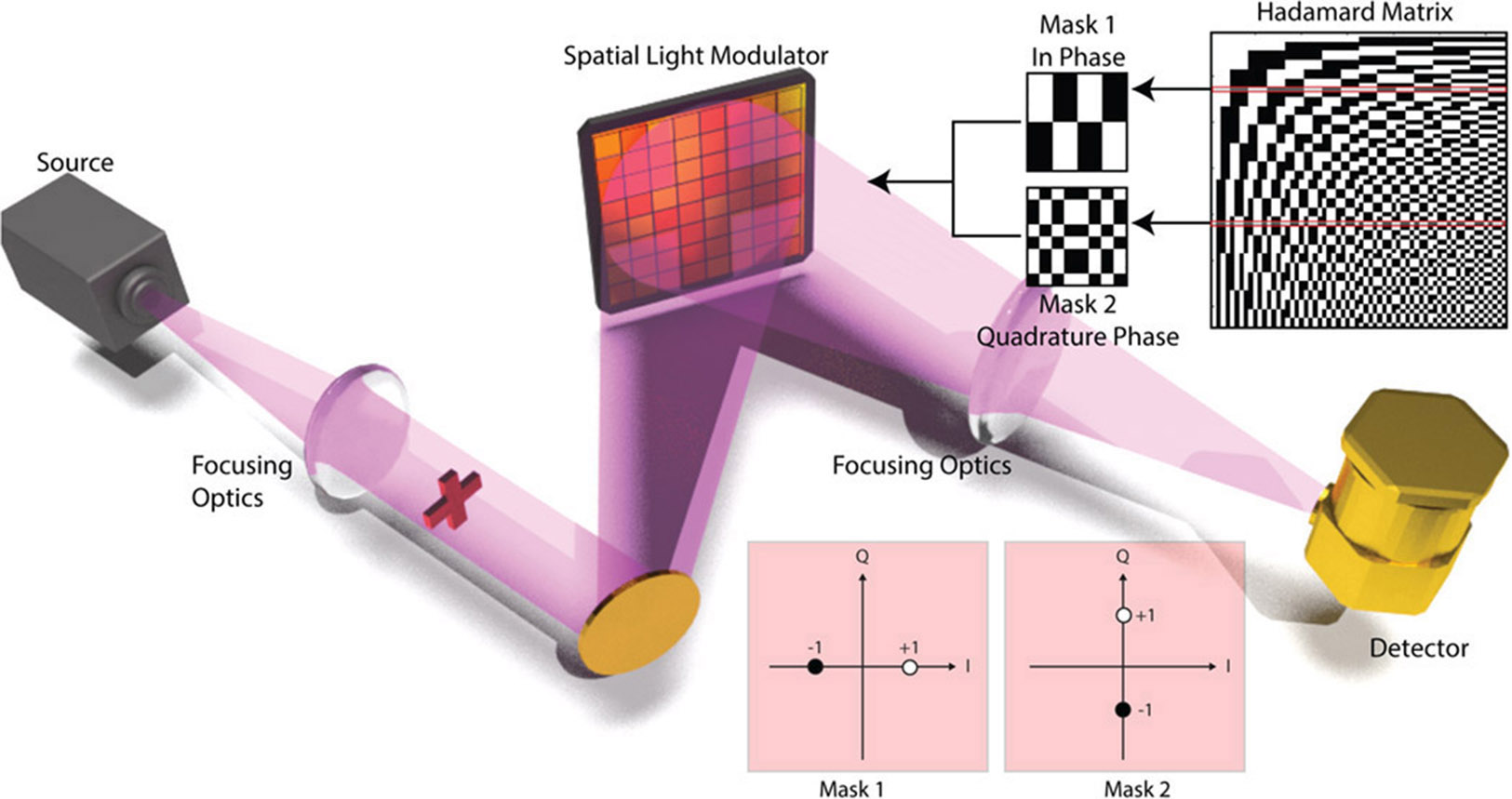 Figure 1. Schematic of the experimental setup for quadrature phase-shift keying (QPSK) imaging. Light from a terahertz (THz) source transmits through an object and is focused onto a spatial light modulator (SLM). Two distinct masks from the Hadamard matrix (mask 1 and mask 2) are encoded simultaneously by the SLM, and light is then refocused into a single-pixel detector.4 The Q and I axes correspond respectively to the quadrature and in-phase components of the QPSK states. 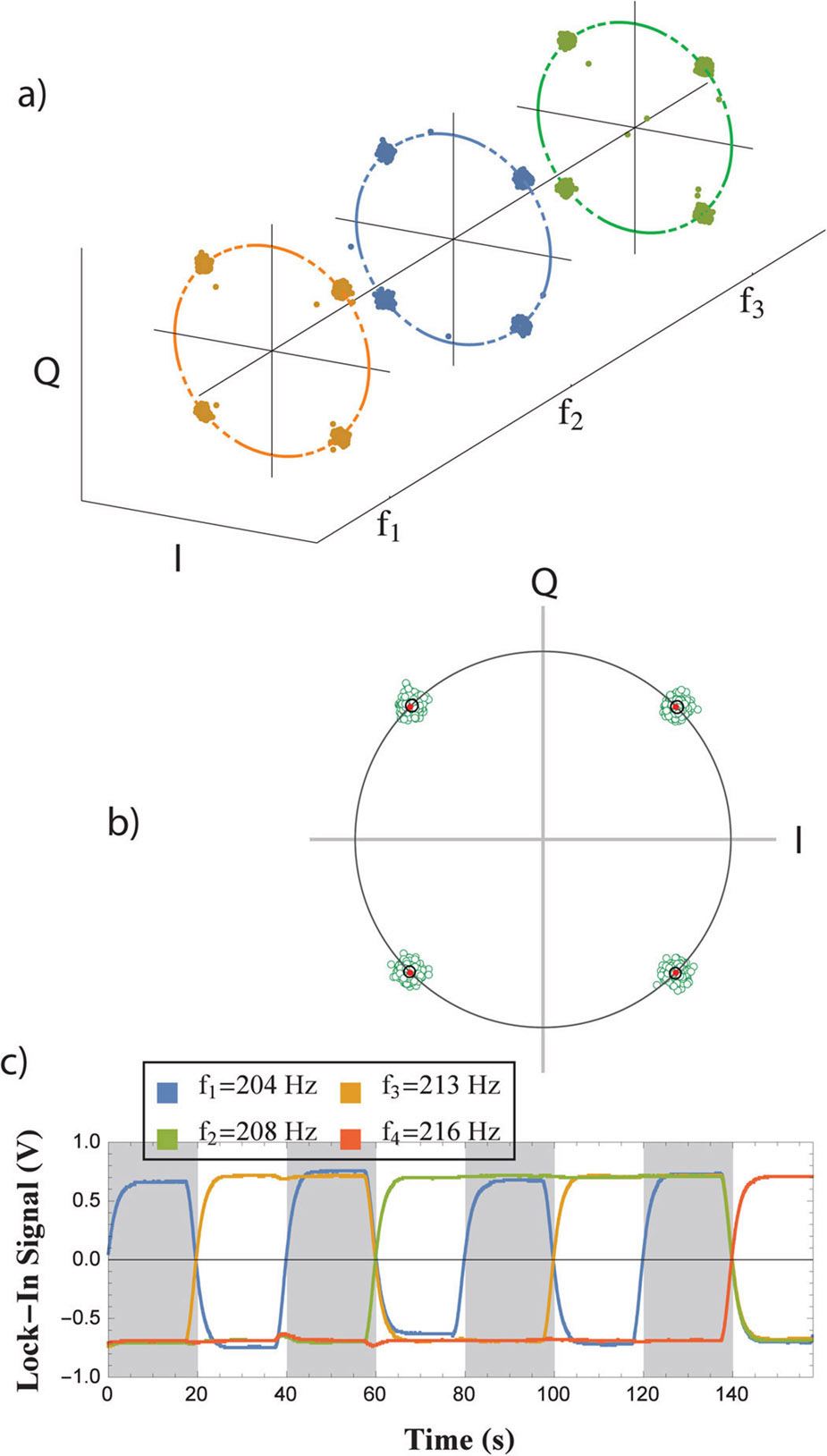 We parallelize the single-pixel imaging process by displaying more than one mask simultaneously, in two different ways.10 First, we use four phase values (π/4, 3π/4, 5π/4, 7π/4) instead of the original two, a method known as quadrature phase-shift keying (QPSK): see Figure 2(b).4 With twice as many phase values, we can display two masks at once and simultaneously measure their results. This deterministically doubles the acquisition speed, since we complete the same number of measurements in half the time. Figure 3(b) and (c) shows the QPSK imaging results. 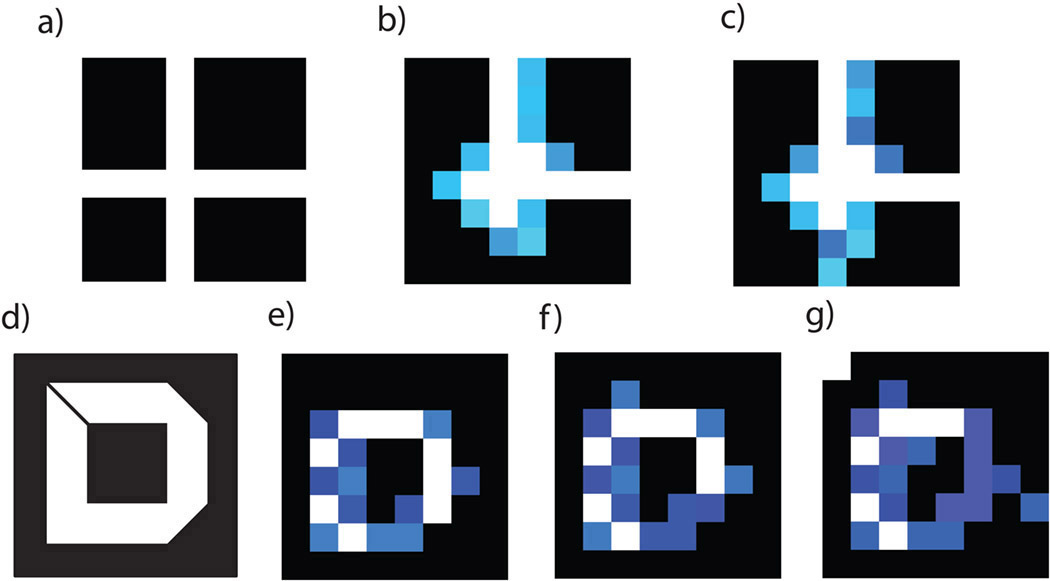 In the second parallelization method, we employ some number of modulation frequencies greater than one.11 These frequencies—four in the case shown in Figure 2(c)—are chosen to be orthogonal in order to minimize interference between them, a technique known as orthogonal frequency division multiplexing (OFDM).12 This allows four masks to be displayed simultaneously, and thus four measurements to be recorded at once via a lock-in detection scheme. This technique therefore yields a fourfold increase in acquisition speed. However, it necessarily spreads the full modulation power of the SLM across several frequencies, so a decrease in signal-to-noise ratio (SNR) is inevitable, as is evident in the imaging results that we obtained: see Figure 3(e–g). On the other hand, this trade of SNR for acquisition speed is made at a constant detector integration time, which can be advantageous in some cases.

The effects of these two parallelization methods combine multiplicatively. By employing the QPSK and OFDM methods together, we achieved a deterministic eightfold increase in acquisition speed. Further, these techniques are completely compatible with compressive sensing approaches.7 Naturally, there is the question of extending these techniques with more frequencies and phase values for even greater acquisition speed. While this is perfectly feasible in the case of OFDM, QPSK is difficult to extend in the context of single-pixel imaging due to the inherent spatial multiplexing of such a system. A phase-sensitive detection scheme must be able to distinguish between measurements of the simultaneous masks, and in the present context this leaves room for only two masks: one encoded in-phase, and one encoded in-quadrature.

The advanced modulation techniques highlighted here are enabled by metamaterial SLMs, and provide a pathway to solving the inherently slow, serial nature of current single-pixel imaging methods. Extensions of QPSK and OFDM to more frequencies and phases have the potential to increase image acquisition speed to a nearly arbitrary degree, limited only by the SNR of the system.13 Improvements to single-pixel methods can help fill the terahertz gap and facilitate related applications in security screening,14 all-weather navigation,15 and biosensing.16 Overall, we expect the scalability of metamaterials and of these advanced modulation methods to have a significant impact in imaging fields, particularly those in the IR, far-IR, and millimeter wave regimes. In our future work, we will extend these techniques to small-format detector array systems, as well as hyperspectral and polarimetric imaging.

Willie Padilla is a professor in electrical and computer engineering. Currently his research interests involve the THz, IR, and optical properties of metamaterials for spectroscopy, imaging, and energy investigations.

Christian Nadell is a PhD candidate working under Willie Padilla. His research interests involve the study of metamaterials and their THz and IR imaging applications.