A purely organic p–n junction is used as the luminescent center in a novel planar device that exhibits a high external quantum efficiency and an extremely low driving voltage.
07 February 2017
Dongcheng Chen and Shi-Jian Su

In recent years, organic LEDs (OLEDs) have become a popular option for creating digital displays. These devices generally consist of three types of semiconductors (i.e., a p-type hole-transport layer, an n-type electron-transport layer, and an emission layer).1–3 The emission layer (normally capable of bipolar transport) provides a platform for carrier capture, exciton generation, and transition, and the luminescent property of an OLED mainly depends on the fluorescence behavior of single-molecule emitters. However, the incorporation of the emission layer within the structure of an OLED causes two energy barriers to be induced at the interfaces with the emission and transport layers. This means that the driving voltages for OLEDs are generally much larger than for traditional inorganic LEDs (with similarly chromatic emission). Moreover, the excitons that are generated at most purely organic emitters have a strong binding energy. This results in a peak radiative utilization exciton ratio of only about 25% (according to the quantum statistics rule of spin selection) in OLEDs.4

Although a number of different strategies have previously been developed to avoid this efficiency bottleneck problem in OLEDs, these approaches have mainly been focused on engineering the molecular structure of the emission layers.5, 6 Such methods thus require complicated chemical synthesis procedures and complex device configurations to maximize the performance of OLEDs. In contrast to OLEDs, the emitter basis of traditional LEDs is based around the use of a p–n junction (the boundary between a p-type and n-type semiconductor) diode, i.e., one of the most basic elements in modern electronics and photoelectronics. Indeed, LEDs are normally composed of an inorganic p–n junction element, and their working principle follows classical p–n junction theory.7–9 This basic p–n junction configuration has led to inorganic LEDs becoming one of the most widely used light sources (e.g., in solid-state lighting and backlights for flat-panel displays).

In our work,10 we have therefore taken inspiration from the p–n junction theory for inorganic semiconductors to develop a highly efficient emission-layer-free OLED (pn-OLED). In our organic p–n junction configuration (see Figure 1), the p-type and n-type organic semiconductors are sandwiched vertically between an indium tin oxide anode and a lithium fluoride/aluminum cathode. In addition, the luminescent center of our pn-OLED is located in the p–n junction region. The light-emission behavior of our device is therefore a result of the synergetic energy release from both the p-type and n-type materials. This is in contrast to conventional OLEDs, where the light generation occurs from single-molecule emitters. 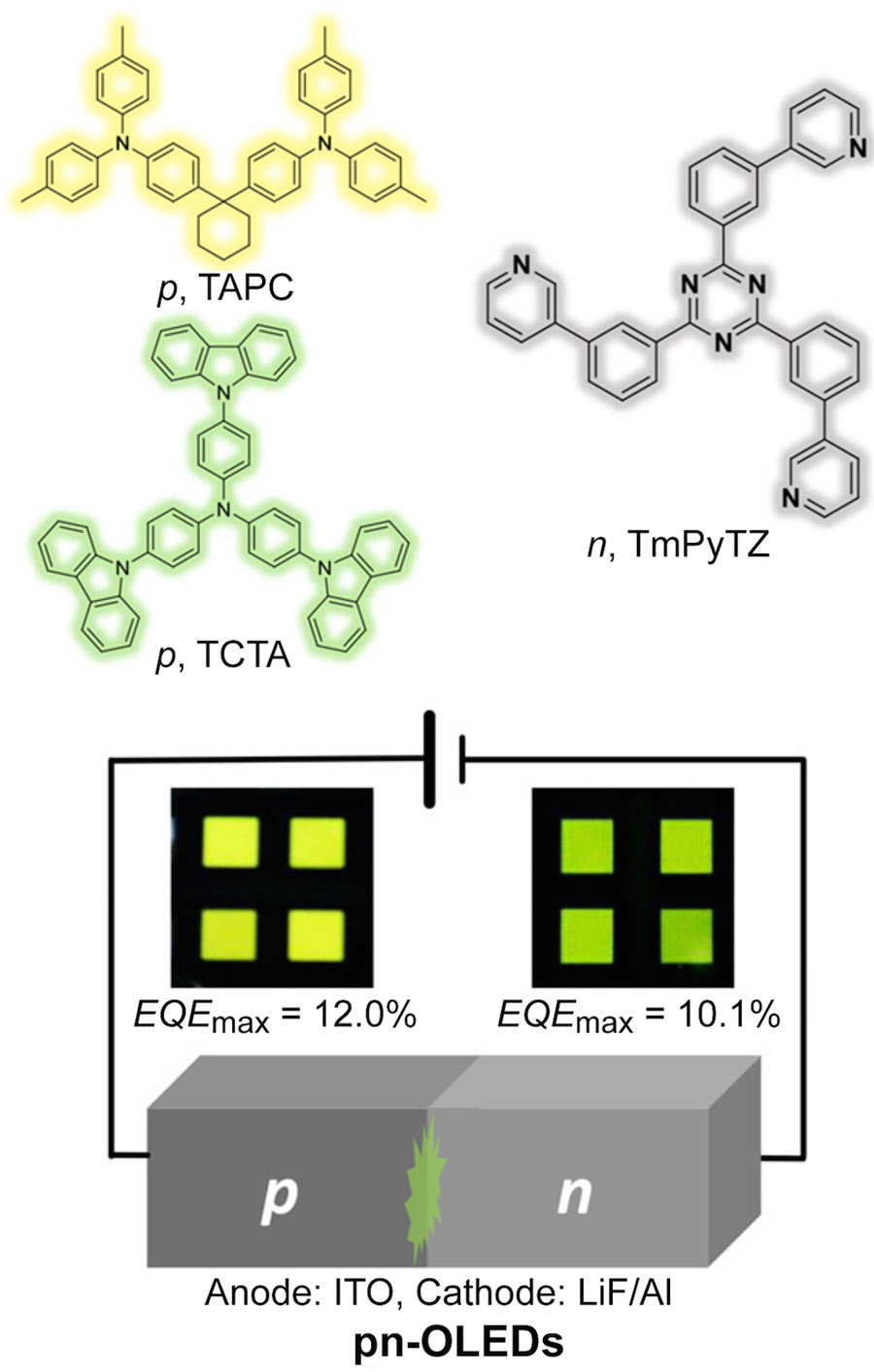 We initially selected 1,1-bis[4-[N,N-di(p-tolyl)-amino]phen yl]cyclohexane (TAPC) and 2,4,6-tris(3-(pyridin-3-yl)phenyl)-1,3,5-triazine (TmPyTZ) as the p-type and n-type semiconductors (respectively) with which to construct our planar organic p–n junction (see Figure 1). We chose TAPC because it is known to be one of the best p-type organic semiconductors, owing to its strong electron-donating and extremely high hole-mobility properties.11 In addition, TmPyTZ is our in-house n-type material that has a strong electron-withdrawing capacity and a good electron-transport ability.12 To our surprise, our TAPC/TmPyTZ pn-OLED exhibits a high peak external quantum efficiency (ηext) of up to 12%. Given that the light out-coupling efficiency of the device is 20%, this ηext should correspond to an internal quantum efficiency (ηint) of 60% (i.e., greatly surpassing the theoretical maximum efficiency—about 25%—for a conventional fluorescent emitter). We can easily modulate the emission color of our pn-OLEDs by changing the material combination that we use in the p–n juction.10, 13 We have also demonstrated green pn-OLEDs (with ηext values of more than 10%) by tuning the p-type semiconductors, e.g., by using 4,4',4”-tri(N-carbazolyl)triphenylamine (TCTA) to offer a p-type transport layer.10 With our work, we have thus shown that—by using only purely organic p-type and n-type semiconductors—our pn-OLEDs have great potential for achieving extremely high efficiencies (i.e., close to the theoretical maximum of ηint∼100%).

Another advantage of our pn-OLEDs is that they require low operating voltages. Indeed, the energy-barrier-free transport and energy-free carrier capture and exciton generation in our devices mean that we can obtain extremely low driving voltages for our pn-OLEDs. Moreover, because at the low driving electric field the carrier transportation is not limited by space charges, the driving voltages of the pn-OLEDs could approach the theoretical minimum. It is therefore feasible to obtain very high power-conversion efficiencies with our devices (i.e., because of their high quantum efficiency and low operation voltage). Our pn-OLEDs may thus be suitable for energy-saving applications (e.g., in mobile display devices and solid-state lighting).

In summary, we have used a basic concept—of using a purely organic p–n junction as a luminescent center—to develop a novel type of high-performance and low-cost fluorescent OLED. We note that our concept of an organic active p–n junction could potentially be used to develop other optoelectronic devices (e.g., photodetectors, electrically pumped organic semiconductor lasers, and organic light-emitting transistors). The fundamental theory used to interpret the carrier and excitonic behavior of organic semiconductors, however, is still disputed. Further investigation of the operating mechanism of our pn-OLEDs will therefore be part of our future work. We also wish to examine the underlying connections of the working principles of both organic and inorganic p–n junction LEDs. Such work may thus provide a way to understand the similarity between the intrinsic properties of organic and inorganic semiconductors.

Shi-Jian Su is a professor. He graduated in 1993 and received his MSc in 1996, both from Xi'An Jiaotong University (China). He subsequently received his PhD from Yamagata University, Japan, in 2002. His current research interests include organic electroluminescent materials and devices.