Solar-driven water splitting is a promising approach for the sustainable generation of hydrogen fuel. Such water splitting involves the use of a photoelectrochemical (PEC) cell, which is typically composed of an n-type photoanode and a platinum counter electrode/p-type photocathode.1–3 When the photoanode is illuminated, the light energy is absorbed and electron–hole pairs are generated. The photoexcited electrons then transfer to the counter electrode, and water is reduced to generate molecular hydrogen. Meanwhile, the holes diffuse to the surface of the photoanode and cause the oxidation of water (to give oxygen). Among different photoanode materials, hematite has attracted much attention because of its favorable optical band gap (2.2eV), extraordinary chemical stability, low cost, and abundance.4, 5 Although the performance of hematite photoanodes has been significantly improved over the past few years, it is still limited by the efficiency of the initial charge separation and electron transfer (which have rarely been studied).

Previous studies on hematite photoanodes have been primarily focused on addressing the poor hole-transfer characteristics of hematite.6–8 For example, enormous efforts have been made in developing hematite nanostructures to reduce the diffusion length of the holes.2 Attempts have also been made to deposit a passivation layer on the surface of hematite to enhance the hole-transfer efficiency.8 Furthermore, the introduction of oxygen evolution reaction catalysts has been demonstrated as an effective way to reduce the over-potential of hematite photonanodes for water oxidation.9

In our recent work,4 we have demonstrated for the first time that a simple acid treatment can be used to substantially enhance the PEC performance of hematite photoanodes (by improving the yield of de-trapped electrons). Our acid treatment is a simple two-step process. First, we immerse a hematite nanowire film in acetic acid for five minutes, and we then anneal the film in air (at 550°C) for an additional 30 minutes.

Our results—see Figure 1(a)—show that acid-treated hematite has a considerably enhanced photocurrent density compared with an untreated sample. In addition, both the untreated and acid-treated hematite electrode have a similar onset potential of –0.15V, relative to a silver/silver chloride (Ag/AgCl) reference electrode, which is consistent with other reported hematite photoanodes (without the addition of oxygen-evolving catalysts).4, 10,11 We also find—see Figure 1(b)—that the acid-treated sample exhibits significantly higher incident photon-to-electron conversion efficiency (IPCE) values than the untreated sample, over the entire 350–650nm wavelength range. These results are thus evidence that our simple acid treatment can be used to effectively improve the PEC performance of a hematite photoanode. Furthermore, the PEC stability of a photoanode is as important as the photocurrent. Moreover, our acid-treated hematite photoanode exhibits excellent photostability under illumination for 24 hours, which proves that the acid treatment has no negative effect on the photostability of hematite. 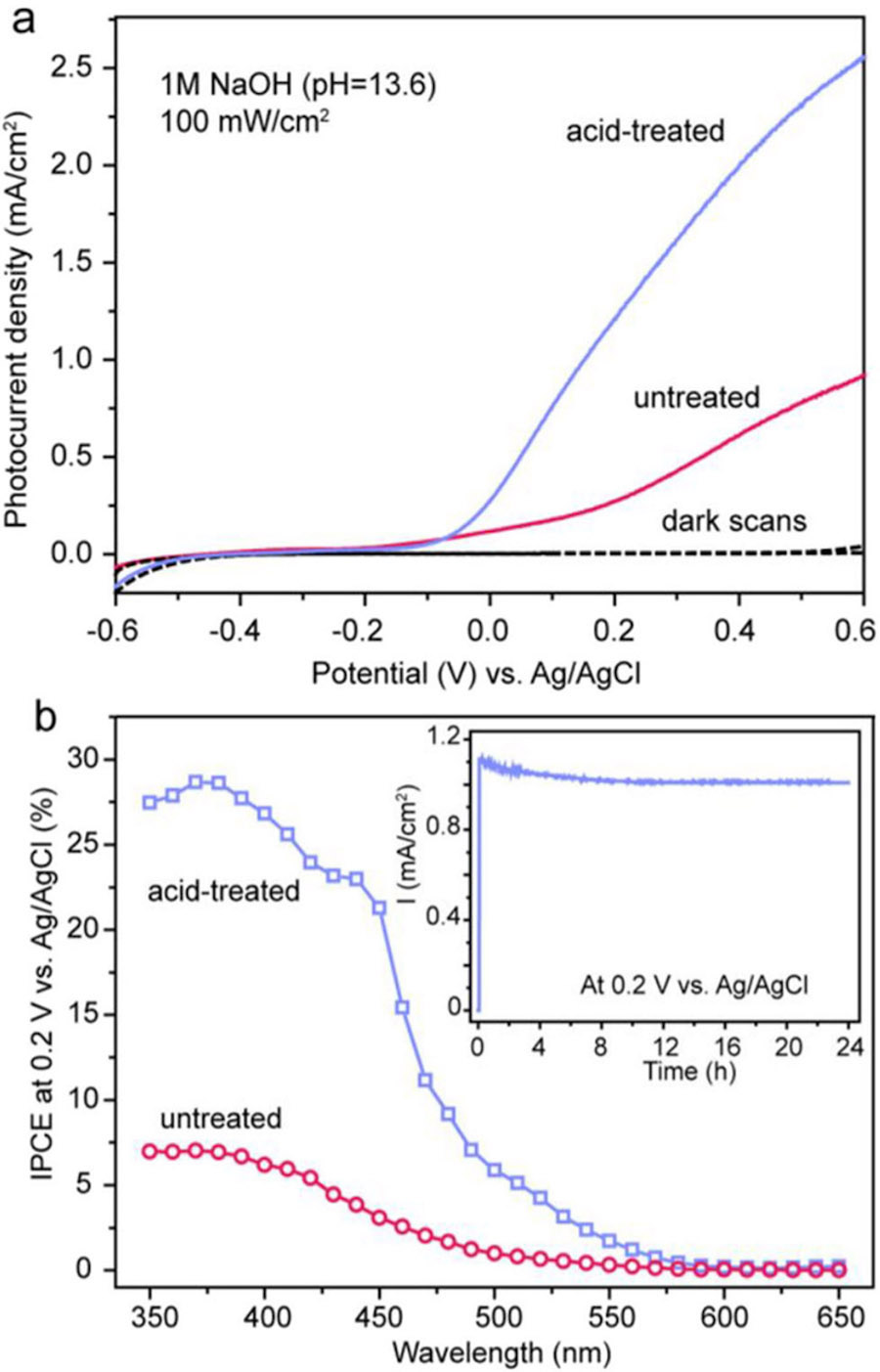 To study the mechanism of our acid treatment, we explored the electronic properties of both untreated and acid-treated hematite. Our Mott–Schottky measurements—see Figure 2(a)—show that the donor density of acid-treated hematite is an order of magnitude higher than the untreated sample. Furthermore, from our electrochemical impedance spectroscopy (EIS) results—see Figure 2(b)—we demonstrate that the charge transfer resistance of hematite is considerably reduced after the acid treatment (i.e., from 113.6 to 5.1Ω). The Mott-Schottky and EIS plots also illustrate that the enhanced PEC performance of the acid-treated hematite is caused by the higher initial charge separation. In addition, we used transient absorption spectroscopy and transient photocurrent (TPC) measurements—see Figure 2(c)—to directly assess the yield and dynamics of photogenerated charges within the photoanodes. We note that the rate of loss of trapped electrons is markedly higher after the acid treatment. Furthermore, the TPC plots indicate that a portion of the de-trapped electrons are able to reach the external circuit. With similar initial concentrations of trapped electrons, acid-treated samples therefore exhibit much faster photoelectron extraction than untreated samples: see Figure 2(d). 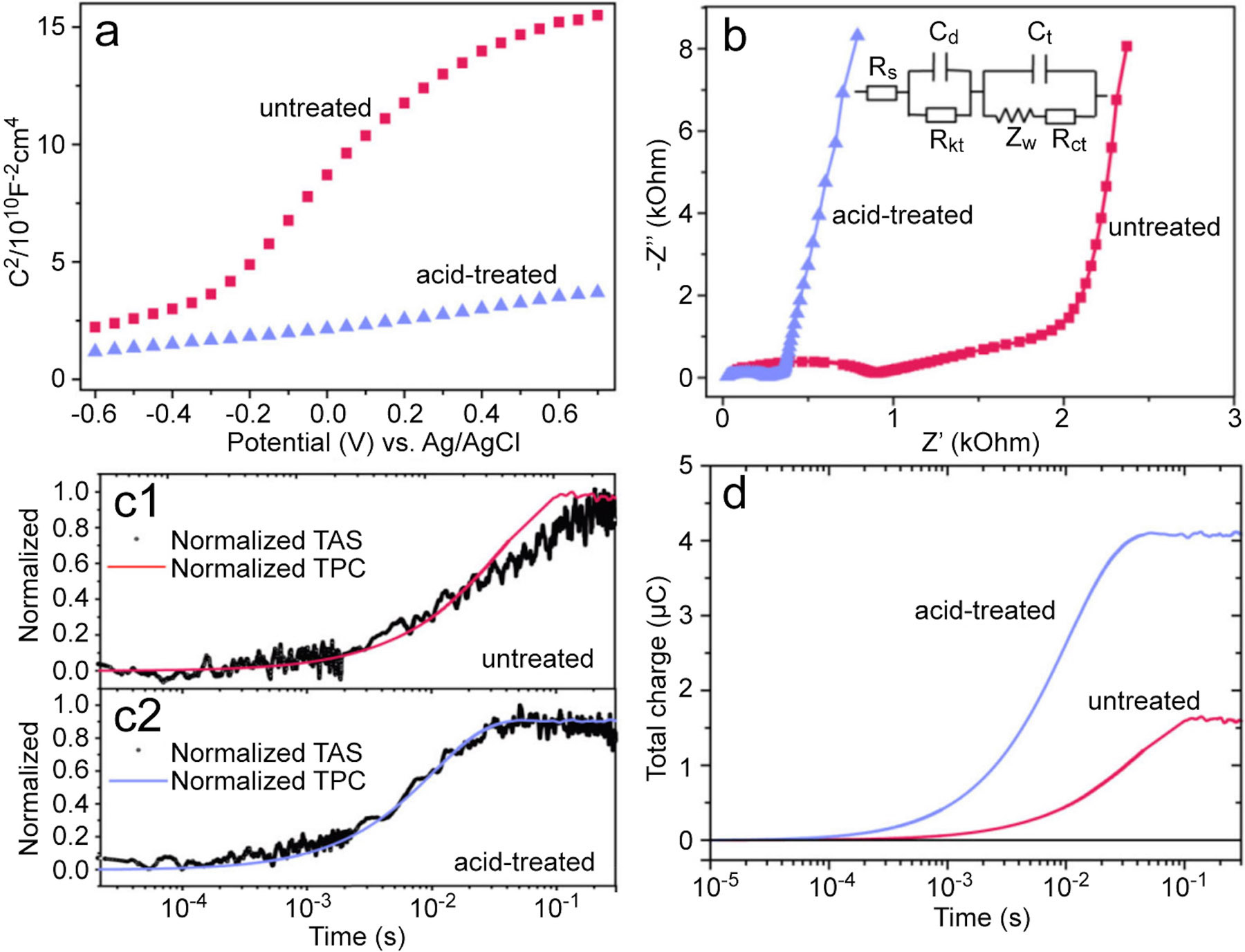 We have also proposed a kinetics model to explain the mechanism of our acid treatment. In this model (see Figure 3) we show that the trapped electrons can either be extracted (de-trapped) and collected for the generation of photocurrent, or they can be lost through recombination with trapped holes. The greater rate for the de-trapping and charge-extraction pathway of the acid-treated sample gives rise to a higher charge-extraction yield, which indicates that the acid-treatment process can modify the nature and position of trapped electron sites. 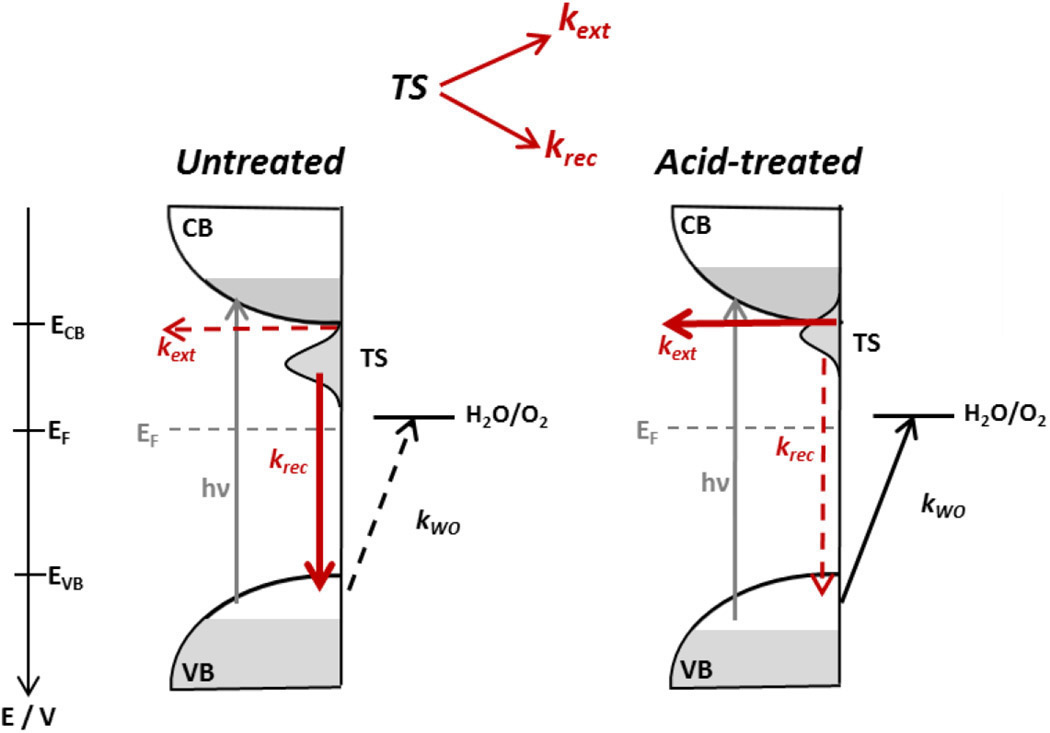 In summary, we have demonstrated a novel, simple acid-treatment method that increases the de-trapping efficiency of photogenerated electrons. Our approach can thus be used to substantially improve the performance of hematite photoanodes for PEC water splitting. Our work also provides additional insights for the study of the efficiency of charge separation. We find that the surface electron–hole recombination can be minimized by passivating surface electron traps. In the next step of our work we will investigate the possibility of coupling our acid treatment with other, previously demonstrated, effective approaches (e.g., the use of catalysts or surface passivation). Our goal will thus be to produce a synergistic method that can be used to boost the performance of hematite photoanodes (i.e., in terms of photocurrent and onset voltage). We believe that this study will open up new opportunities in the design and fabrication of hematite photoelectrodes.