In recent years, i.e., since the International Polar Year of 2007–2008, thin ice clouds (TICs) that are unique to polar regions have been revealed as standing features of the polar atmosphere during the dark season.1 Such discoveries have also been made possible by two highly successful satellites launched in April 2006—NASA's Cloud-Aerosol Lidar and Infrared Pathfinder Satellite Observation2 (CALIPSO) and CloudSat3—which include active instruments (a lidar and radar, respectively) used to probe clouds and aerosols for the first time. Over the past few years, it has thus become a prime scientific objective to monitor the formation of TICs and light precipitation in the Earth's coldest regions (i.e., at high latitudes and near the tropopause). Despite this recent work, new far-IR data is still required to improve medium-range weather forecasting during the winter months, and which is essential for populations living at far-northern latitudes.

In our work (as part of a collaboration between the National Optics Institute, Canada, and the Canadian Space Agency), we have thus built a new aircraft-certified far-IR radiometer (FIRR).4 Our ultimate aim is for the instrument to be a future microsatellite payload. At present, however, we have designed the FIRR for use on the Alfred Wegener Institute's (Germany) Polar 6 aircraft, i.e., for unattended airborne measurements of ice clouds over the Arctic. Our ground tests show that when used as a non-imaging radiometer, the FIRR exhibits a noise equivalent radiance in the range of 10–20mW/(m2sr). In addition, we have found that the dynamic range and detector vacuum integrity of the instrument are suited to the conditions of airborne experiments.

In the design of the FIRR, we had to meet a number of specific requirements, i.e., those of a pan-arctic airborne mission. First, it is necessary that the system enables cloud radiance measurements in as many spectral channels (in the region where thermal emission of thin ice clouds is most effective) as possible. It is also mandatory that the instrument has an in-flight radiometric calibration capacity (so that adequate measurement resolution and accuracy in the specific spectral channels are achieved). In addition, we require that the instrument be operated without full-time dedicated personnel. Lastly, it is necessary for our instrument to function when it is exposed to vibrations and air turbulence, as well as ambient temperatures and pressures (i.e., in the range of 233–313K and 45–80kPa, respectively), because the FIRR operates in an unpressurized compartment of the aircraft.

We therefore designed our instrument to perform far-IR radiance measurements over nine channels that are distributed across a very broad spectral range (8–50μm). Meanwhile, we have kept the volume and mass budget of the instrument within reasonable limits. In particular, we chose not to use a combination of cameras (with integrated multispectral filters in various spectral segments). Instead, we selected a configuration in which a single camera is located behind a rotating wheel of bandpass filters. This means that we can measure the scene radiance successively, i.e., in one channel after another (which is possible because the characteristics of cloud scene evolve slowly in space and time), rather than simultaneously.

So that we can realize unattended calibration and acquisition of data, the FIRR instrument—see Figure 1(a)—is composed of two stand-alone units, i.e., the optomechanical device (OMD) and the instrument control device (ICD). The OMD includes the camera, bandpass filter wheel, an assembly of blackbodies, and a scene-selection mirror, all of which are mounted and optically aligned on a shared baseplate. The camera itself consists of a microbolometer array (80 × 60 vanadium oxide microbolometers, with 104μm pitch5) that is placed in the focal plane of a reflective telescope.6 In addition, we have coated the microbolometers with gold-black to maintain a relatively uniform responsivity across the broad spectral measurement range.7 With our setup—see Figure 1(b)—incoming radiation (from either a scene or a blackbody) is first filtered by one of the bandpass filters, before it reaches the telescope. We use the ICD—a structural rack of electronic apparatus—to provide control and power regulation for several of the OMD components, a user interface, and storage space for the acquired data. 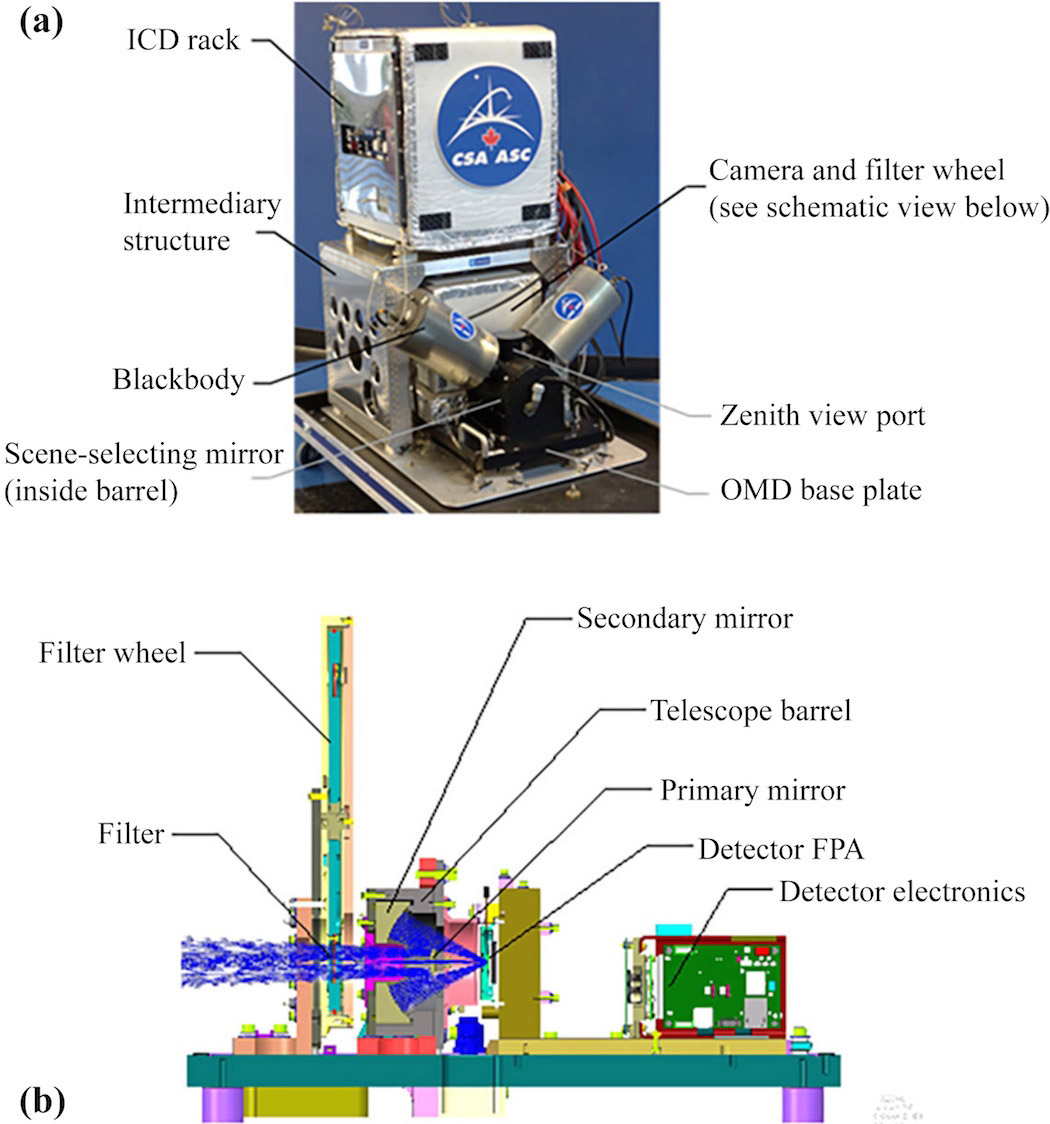 Figure 1. (a) Photograph of the far-IR radiometer instrument, showing the two stand-alone units of the instrument: the optomechanical device (OMD) and instrument control device (ICD). (b) Schematic illustration of the instrument's mirrors, camera, and filter wheel (inside the enclosure under the ICD rack). The radiometer has a footprint (excluding the ICD) of 887 × 813mm, and the OMD has a height of 570mm. FPA: Focal plane array.

We designed the telescope (i.e., which routes the radiant flux to the detector) in our camera so that it provides broadband transmission and a steady optical performance over the instrument's operating temperature range (283–318K). We make use of the common two-mirror Schwarzschild design to achieve the broadband transmission. Specifically—see Figure 1(b)—we include a small-diameter primary mirror (held in position by a spider mount) and a large-diameter secondary mirror that has a center aperture. Both of these mirrors are spherical, made from aluminum, and are protected with a thin layer of gold. As part of our study, we used a Fourier transform spectrometer to measure the far-IR reflectance properties of representative samples, and to thus characterize the protected mirror surfaces. We find—in the 7–70μm spectral range—that the reflectance data exhibits a variation of less than 1% around a mean value of about 0.99. This result confirms that the protective gold on our mirrors does not have a detrimental effect on the uniformity of the mirrors' reflectance. To minimize the contribution of stray light, we have also painted the telescope barrel and the internal surfaces of the baffles with an IR black paint. Lastly, to provide relatively high-speed operation, our design features an entrance-pupil diameter and effective focal length that are both 20mm.

In summary, we have designed and built a new FIRR instrument for making unattended airborne measurements of ice clouds. Our design includes a number of features that make it suitable for airborne missions. For instance, we use only a single camera with a bandpass filter wheel to realize a broad spectral range, while minimizing the mass and volume of the instrument. We have also designed the instrument to have two standalone units—the OMD and ICD—so that unsupervised, in-flight calibration and data acquisition measurements can be made. In March 2015, we successfully installed the FIRR on the Polar 6 aircraft and conducted a month-long Arctic campaign, from which we obtained valuable information pertaining to thin ice clouds. We are now in the process of using this data set to inform the design of the microsatellite version of our instrument.