Tabletops can be shared spaces for collaborative work and are useful for a variety of tasks. For instance, documents, materials, mock-ups, and other objects can be exchanged between multiple people seated around a table. Taking inspiration from such real-life scenarios, it is a current aim to achieve a virtual-reality system that can be used for collaborative tabletop communications. To achieve such tabletop communications that are as natural as possible, a number of requirements must be satisfied. First, it should be possible to view 3D images over a full 360° range. Second, ordinary tabletop activities should not be inhibited. Third, the number of viewers should not be limited, and last, no special 3D glasses or wearable tracking system should be required.

Although recently developed virtual-reality systems (i.e., head-mounted displays) can be used for collaborative work, they only satisfy the first tabletop requirement. Moreover, the user experience with these systems is that of a totally immersive virtual world where people depart from real-life communications. In addition, volumetric (volume-swept) displays1 can also be used to generate glasses-free 3D images with 360° viewing angles and thereby satisfy the first, third, and fourth requirements. However, they also include the use of showcase-like mechanical components on the table and thus do not satisfy the second of the requirements. Furthermore, several glasses-free tabletop 3D displays that satisfy all four conditions have previously been proposed.2, 3 These methods, however, generally involve the use of a horizontal high-speed rotation disk on the table (or a few high-refresh-rate projectors). Such high-speed components therefore mean that tradeoffs—between color-depth range, refresh rate, and the number of directions that can be displayed per second—are required. These systems thus generally entail substantial shortcomings when they are used to display full-color animations and interactive content. In addition, the moving component is usually bulky and gives rise to difficult momentum control when the display is enlarged.

In our work,4 we have therefore developed a novel glasses-free tabletop 3D imaging technology—known as fVisiOn—with which we aim to display virtual 3D media alongside real media (in a natural manner). We can use this device to display full-color, 10cm-wide, 5cm-tall real-time 3D animations. We install the complete mechanism underneath the table to satisfy the second of the initial requirements. The system thus forms a 360° annular viewing area around the table, and provides horizontal parallax without the need for 3D glasses or head tracking in the horizontal plane (i.e., so that the third and fourth conditions are satisfied). Any number of viewers seated around the table (as in the first requirement), or standing at a distance of 1–2m, can therefore observe the 3D images from the ‘sweet direction’ of the fVisiOn system (i.e., at an elevation angle of 35° from the center of the table). An example of fVisiOn in use, is shown in Figure 1, where a real mirror and a toy duck are placed on the table around the displayed 3D computer-generated objects. From this photograph it is obvious that the virtual and real objects are both reflected by the mirror in a natural manner (because of the horizontal parallax that exists around the table). 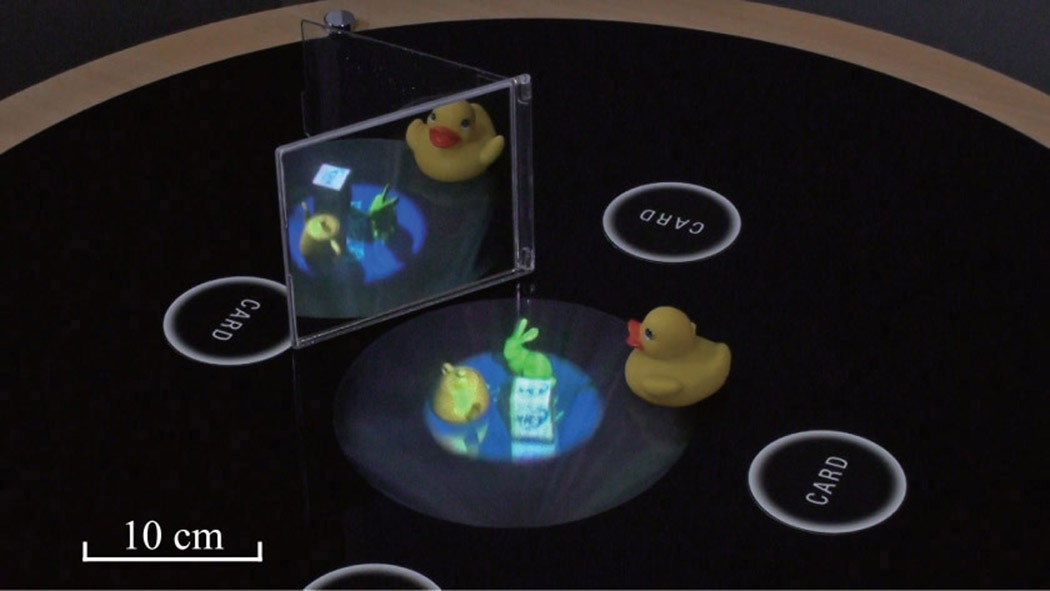 Figure 1. Photograph showing the use of the glasses-free tabletop 3D display system fVisiOn.4Both the real (i.e., toy duck) and 3D computer-generated objects are reflected, in a natural manner, by the mirror.

One of the distinctive features of our method is the ability to ‘float’ 3D images on an empty, flat tabletop by using only static components (see Figure 2), and the hardware components within our latest prototype are shown in Figure 3. The exterior of this prototype looks like an ordinary round table, with a diameter of 90cm and a height of 70cm. In this case, the conical rear-projection screen is installed beneath the table and its curved surface causes anisotropic diffusion of the incoming rays (i.e., it diffuses the light in the direction of the shape's edge so that it passes in the direction of the circumference).

Figure 2. Schematic illustration of the principle behind the fVisiOn method for generating table 3D images over a 360° viewing angle. Ea and Eb: Two different eye positions. Pa: Point on the imaginary object's surface that emits light rays virtually to emulate the surface. Ps: A point on the conical screen's surface at which directional light rays (from each projector) can proceed straight into the horizontal plane.

Figure 3. Photographs of the exterior (left) and internal (center) components of the fVisiOn prototype, as well as the resultant generated 3D images (right).

To demonstrate the operation of our prototype, we arranged 288 tiny projectors in a circle to generate light rays with many directions. Each pixel cast by these projectors corresponds to a particular ray. On a vertical plane, each ray enters the screen and exits at an angle. Part of this fan-like diffused light from the ray is then caught by the viewer's eyes (see Figure 2, left). In contrast, on a horizontal plane, the orientation of the rays that are produced from a series of projection centers is preserved after they pass through the screen (see Figure 2, right). At any position around the annular viewing area, the eye observes the slit-like parts in each projector's rays. The retina therefore collects fractional slit-like images from different projectors and forms an appropriate image for the perspective of each viewing point.

Additional benefits that arise from our methodology include the blank space that surrounds the 3D images, and the fact that the tabletop is merely covered by a semi-transparent acrylic plate. Some sensors (e.g., cameras and magnetic devices) can thus be set underneath the table. Some examples of applications of our interactive 3D display are illustrated in Figure 4. For example, ‘imaginary 3D games’ from manga (graphic novels) and science fiction movies are enabled. By placing cards in a certain area of a table, the creatures on the cards are ‘summoned’ to the table as glasses-free 3D images. Multiple players can watch the creatures fight from any direction (i.e., over the full 360° range) around the table. fVisiOn is also suitable for ordinary collaborative activities around tabletops, e.g., it can be used during group discussions and teleconferences to share digital documents and virtual mock-ups. 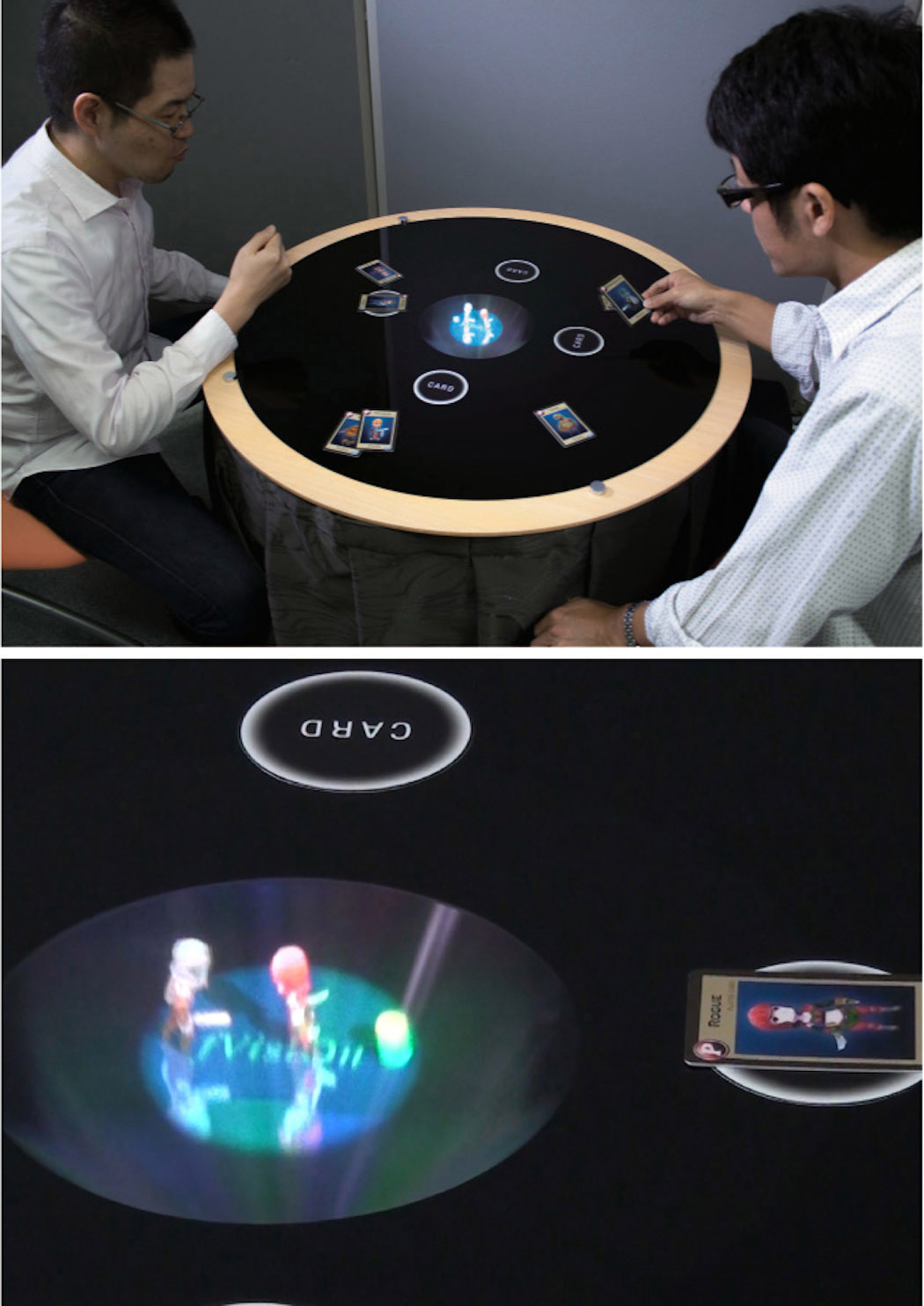 Figure 4. Photographs of the fVisiOn being used for a tabletop ‘imaginary’ 3D card game.

In summary, we have developed the so-called fVisiOn system as a novel glasses-free 3D imaging technology that can be used for various collaborative and gaming applications. We have also successfully demonstrated the use of a prototype, i.e., multiple viewers can view the 3D computer-generated objects around a 360° viewing range, at distance of about 0.5–2m, and with the correct perspective (i.e., an elevation angle of 35°). In our current work we have confirmed and realized our methodology with only the use of a ‘homemade’ prototype. Our displayed 3D images are thus somewhat blurry and unfocused (because of the limited precision of our equipment). In the next stages, we therefore aim to improve the 3D image quality we obtain with our system. For example, we need to shorten the angular pitch of the projectors so that we can generate sharper results. By employing fabrication techniques that are used in industry, we hope to create an improved system.

Shunsuke Yoshida is a senior researcher whose work focuses on virtual reality systems and glasses-free 3D displays. He received his PhD in human informatics from Nagoya University, Japan, in 2001.