A multiple-cation engineering strategy is used to realize devices with open-circuit voltages that are close to the thermodynamic limit, as well as high electroluminscence and stability at elevated temperatures.
29 December 2016
Michael Saliba

Perovskites have emerged as an attractive low-cost option for high-efficiency photovoltaic (PV) materials, which have certified power conversion efficiencies (PCEs) that approach those of established technologies (up to 22.1%).1 The perovskites that are used for such PVs generally have an ABX3 structure, i.e., where the cation A is methylammonium (MA), formamidinium (FA), or cesium (Cs), the metal B is lead (Pb) or tin, and the halide X is either chlorine, bromine, or iodine (I). Single-cation perovskites, however, often suffer from phase, temperature, or humidity instabilities, and poor reproducibility. These problems are particularly noteworthy for the perovskites CsPbX3 and FAPbX3, which are only stable at room temperature as photoinactive (‘yellow’) phases rather than as more-desirable photoactive (‘black’) phases (stable at higher temperatures). In addition to achieving phase stability, it is also necessary to operate perovskite solar cells (PSCs) at elevated temperatures (i.e., of more than 85°C) to surpass current industrial norms.

In recent work, double-cation perovskites (which include MA and FA, or Cs and FA) were shown to be stable as a black phase at room temperature.2–4 These materials also exhibit unexpected and novel properties. For example, Cs–FA mixtures suppress halide segregation and thus enable suitable band gaps for perovskite/silicon or perovskite/perovskite tandem PVs.5 In general, it has been found that by adding more components to the perovskite, their entropy is increased and unstable materials can thus be stabilized. For instance, the yellow phase of FAPbI3 can be avoided by using (also unstable) CsPbI3.

In our work we have thus developed this cation-mixing approach further, to investigate triple-cation (containing Cs, MA, and FA) perovskites.6 For example, we show the tolerance factor (t)—a geometric measure for the distortion of a perovskite—for various APbI3 perovskites in Figure 1. In particular, we focus on alkali-metal cations because they are stable to oxidation. So-called ‘established’ perovskites (i.e., containing Cs, MA, or FA)—with t between 0.8 and 1.0—exhibit the photoactive black phase at room temperature, and are thus used for high-efficiency PSCs.7, 8 In contrast, perovskites with lower t (i.e., containing lithium, sodium, or potassium) have non-photoactive yellow phases. Our tolerance factor calculations also show that rubidium (Rb) is very close to the yellow/black phase threshold (although seemingly too small) and is thus a good candidate for integration into the perovskite lattice. We have therefore used a general multiple-cation engineering strategy to integrate Rb (which never exhibits a black phase when used in a single-cation perovskite) and to study novel multication perovskites.7

Figure 1. (A) Tolerance factor (t) of different APbI3-structure perovskites, where Pb is lead, I is iodine, and A is an oxidation-stable cation, i.e., lithium (Li), sodium (Na), potassium (K), rubidium (Rb), cesium (Cs), methylammonium (MA), or formamidinium (FA). Perovskites with t between 0.8 and 1.0 exhibit a photoactive ‘black’ phase (solid circles), whereas those with lower t have non-photoactive ‘yellow’ phases (open circles). The t of Rb is very close to the 0.8 threshold and is thus a good candidate for integration into the perovskite lattice. (B) Photographs of CsPBI3(top) and RbPbI3 (bottom) perovskites at 28, 380, and 460°C. Irreversible melting for both compounds occurs at 460°C, and RbPbI3 never exhibits a black phase.7

We have also recently demonstrated very high performance (i.e., excellent PCEs) for MAFA double-cation perovskites.1 From our x-ray diffraction analyses of such MAFA compounds, however, we found that they still contained detrimental, photoinactive yellow phase impurities: see Figure 2(a). Such impurities are one of the reasons for the unreproducible behavior of these perovskites. We thus added Cs to the compounds—to create a triple-cation perovskite—and achieved a substantially suppressed yellow phase (because of better-matched t values). With our triple-cation perovskites—see Figure 2(b)—we can obtain stabilized PCEs of 21.1% and improved reproducibility.6 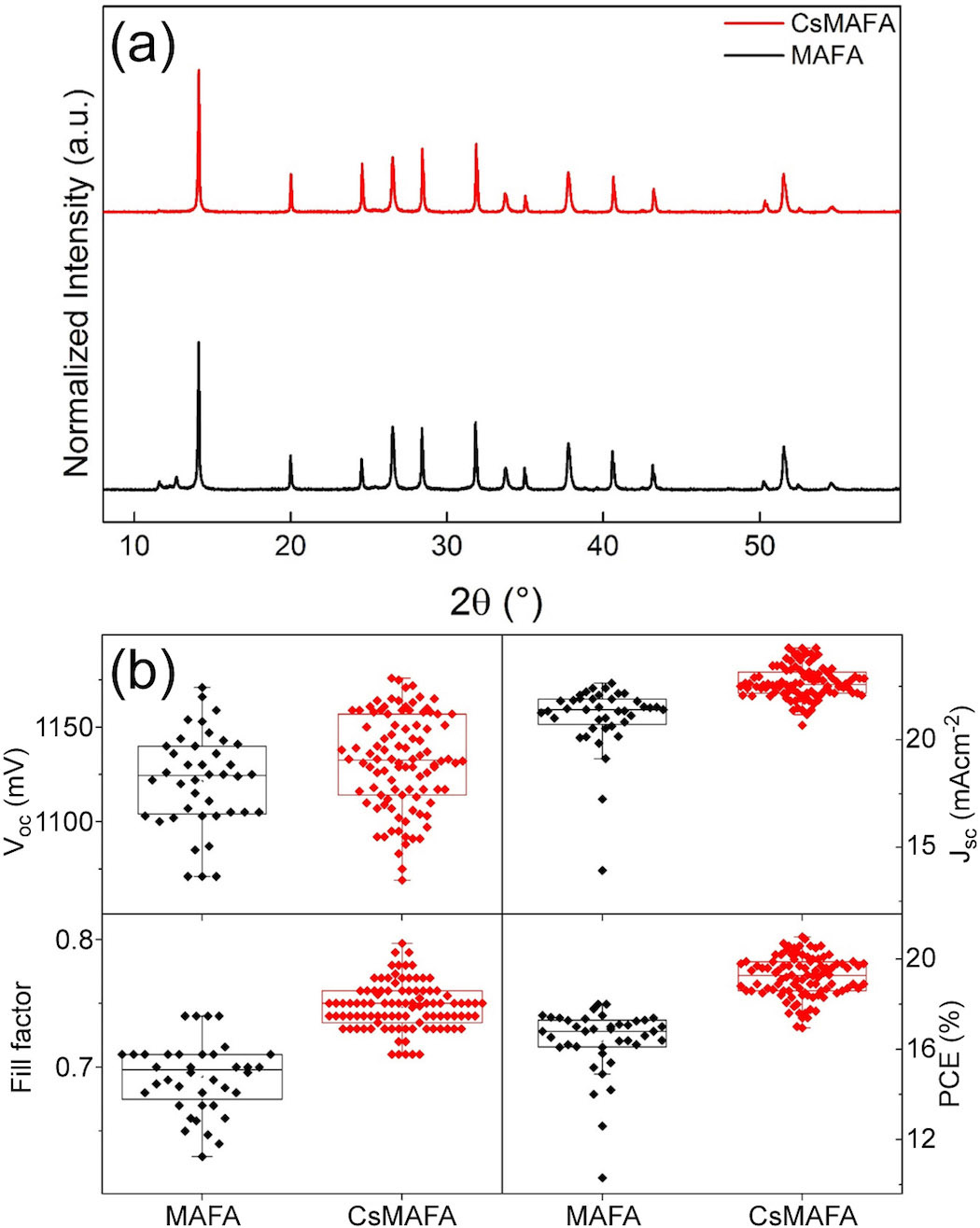 Figure 2. (a) X-ray diffraction spectra for a MAFA double-cation perovskite and a CsMAFA triple-cation perovskite. The yellow phase impurities, at a measured angle of diffraction (2θ) of 11.6°, in the MAFA spectrum disappear upon addition of Cs. (b) Statistics for 40 MAFA and 98 CsMAFA perovskite photovoltaic devices. All device parameters—i.e., open-circuit voltage (Voc), short-circuit current density (Jsc), fill factor, and power conversion efficiency (PCE)—as well as the standard deviation (a metric of the reproducibility) are improved upon addition of Cs. Twenty different devices have a PCE of more than 20%.6

In the next stage of our work we added Rb to our single, double, and triple-cation perovskites, and thus doubled the number of available compositions. Specifically, we investigated the novel compositions of RbFA, RbCsFA, RbMAFA, and RbCsMAFA. Our results show that the quadruple-cation RbCsMAFA perovskite—see Figure 3(a)—yielded the best performance (i.e., with a stabilized PCE of 21.6%). For this device we also measured an open-circuit voltage of 1250mV, at a band gap of 1630mV, and a loss-in-potential (the difference between the band gap and open-circuit voltage) of 390mV. This is among the lowest values for any PV materials yet measured and indicates that it is a nearly recombination-free material. We are thus able to operate a solar cell made from this material as an LED, even at ambient conditions: see Figure 3(b). We have also demonstrated—see inset to Figure 3(a)—that polymer-coated multication PSCs can be operated at elevated temperatures (more than 85°C) to achieve full illumination and load for 500 hours (i.e., exceeding industrial requirements). 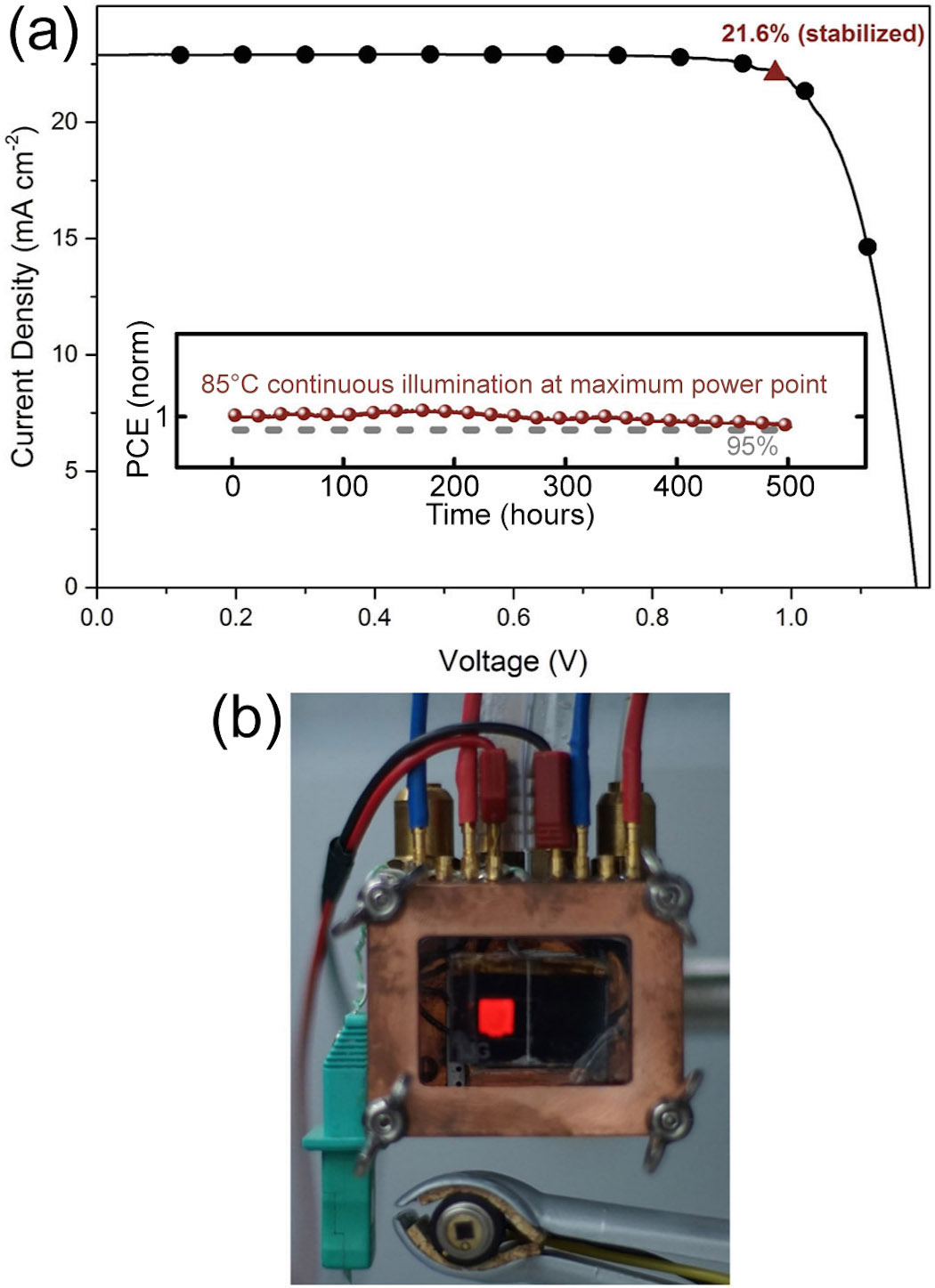 Figure 3. (a) Current density–voltage curve for the best-performing Rb-containing solar cell (i.e., a RbCsMAFA device), with a stabilized PCE of 21.6%. Inset: Thermal stability of a polymer-coated perovskite solar cell that has an efficiency of more than 17%. This device was aged for 500 hours at 85°C, under continuous illumination and maximum power point tracking conditions, in nitrogen atmosphere (red curve). The cell retained 95% of its initial performance, as indicated by the dashed gray line, which is normalized (norm) to the aged result.7 (b) Photograph of a RbCsMAFA solar cell (mounted in a custom-made device holder) operated as an LED, with temperature and ambient-gas control. A bright emission at 1.63eV is visible even under ambient room-light conditions.

In summary, we have investigated a multiple-cation (i.e., triple and quadruple) approach to achieve stable perovskite materials for efficient solar cells. We have also successfully integrated Rb (normally considered too small for these materials) as a cation into such perovskites. Our multication perovskites are thus essential for achieving robust and reproducible solar cells, i.e., which are less prone to phase, temperature, and humiditiy instabilities than single-cation perovskites. In addition, we have demonstrated that polymer-coated PSCs can withstand stress tests that are harsher than industrial norms (i.e., heating at 85°C, under full illumination and load conditions, for 500 hours), which is a crucial step toward the industrialization of perovskite materials. In the next stages of our work we need to thoroughly investigate our newly established compositions. This work will include an assessment of viability toward upscaling, as well as further stability testing (e.g., cycling of temperature, humidity, and sealing).

Michael Saliba acknowledges support from a Marie Skaaaodowska Curie fellowship and a H2020 grant agreement (66566). He is also grateful to his colleagues at the École Polytechnique Fédérale de Lausanne's Laboratory for Photonics and Interfaces and the Laboratory of Photomolecular Science for fruitful collaborations. In particular, he thanks Michael Grätzel and Anders Hagfeldt for their support.

Michael Saliba is a Marie Curie Fellow at EPFL, where he works with the Grätzel and Hagfeldt group. He completed his PhD at Oxford University, UK, in 2014 as part of Henry Snaith's group. His research is generally focused on optoelectronic properties of emerging photovoltaic technologies, with an emphasis on PSCs.