Rapid, high-precision 3D printing on the nanometer to centimeter scale

The use of different fabrication modes for additive and subtractive processes in the novel LithoProf3D platform enables industrial-level scalability for the fabrication of 3D structures.
02 December 2016
Ruth Houbertz and Benedikt Stender

The use of light as a shaping tool for the creation of 3D structures is becoming ever more prominent in the field of rapid prototyping, particularly for structures where high precision is needed. Indeed, the required precision for such structures can only be achieved by using specially adapted materials, processes, and fabrication strategies. For example, microlenses and optical waveguides can be produced in a process known as two-photon absorption (TPA), which requires the use of a femtosecond laser light source. The light intensity needed to create a volume pixel, however, is only high enough in a strongly localized focal volume of the laser. Within the material system, TPA then causes the initiation of a polymerization process (i.e., in which two photons are absorbed at the same time, each with half the energy typically required to initiate polymerization) known as two-photon polymerization (TPP). Although TPP occurs on a fast absorption timescale, it is generally slow on a structure-fabrication timescale. This is because the ‘pen’ used for the fabrication is very small (sometimes as small as about 100nm in diameter, and 200–300nm in height). TPP thus enables fabrication of very sophisticated structures for many different applications (e.g., in photonics and biomedicine), with plenty of room for designs (see Figure 1), but its throughput and scalability need to be greatly improved. 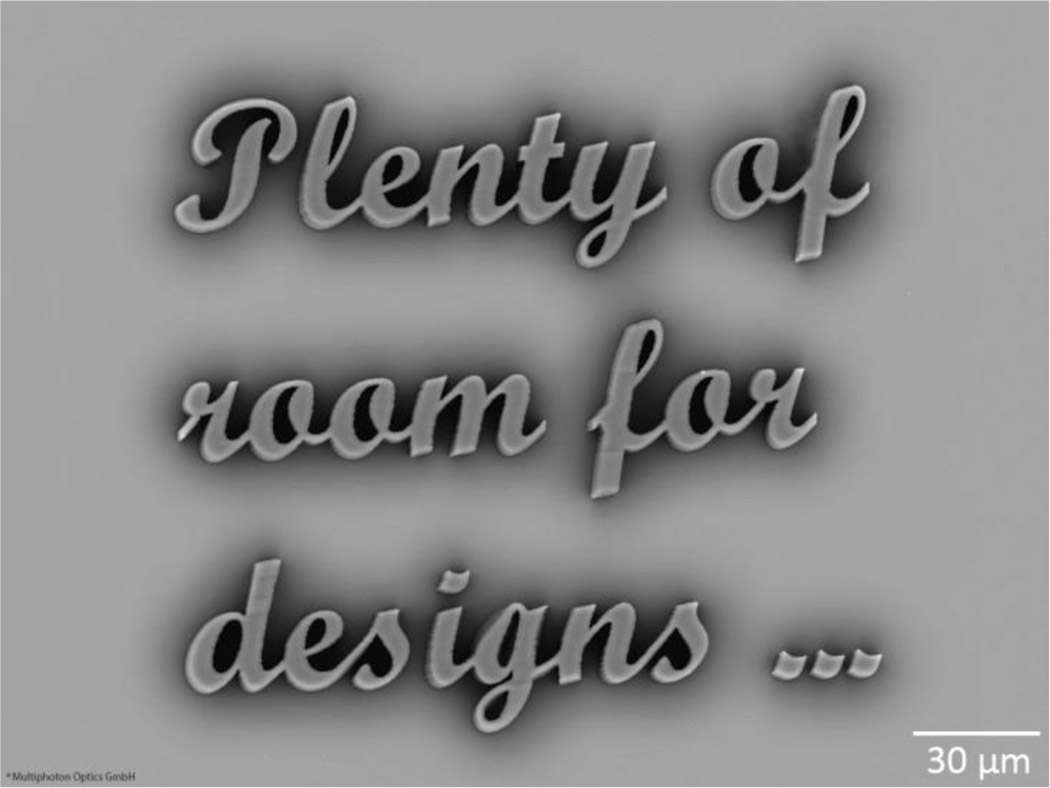 At present, commercially available TPA equipment is typically used for academic purposes along with well-known standard procedures.1–3 Neither the equipment, nor the methods, however, provide the capability for large-area fabrication or modular exposure strategies. Furthermore—for industrial applications—fabrication time, throughput, and large-area fabrication capability with a high degree of reproducibility are the key limiting factors of TPA that must be optimized to provide mass manufacturing scalability. To date, much effort has been put into the development of novel photosensitive materials that can be used to increase the TPA absorption rate and thus to enable structuring at higher speeds.4–6 So far, however, only slight improvements to the TPA process have been achieved.

To further improve the TPA additive fabrication technique for industrial applications, we have developed a high-precision 3D-printing platform known as LithoProf3D (see Figure 2). We use this instrument, in combination with our flexible LithoSoft3D software package, to provide different fabrication strategies and exposure modes that are suitable for fast fabrication of all kinds of 3D structures (ranging in size from sub-micrometer to centimeter). With our equipment we provide the capability to choose the best exposure strategy for each individual structure (and combinations of structures). Moreover, the equipment has different fabrication modes (e.g., a high-precision X-Y-Z translation stage and a scanner system) that can be combined to provide an infinite field of view. We can thus provide a large-area fabrication capability, without the need to stitch. 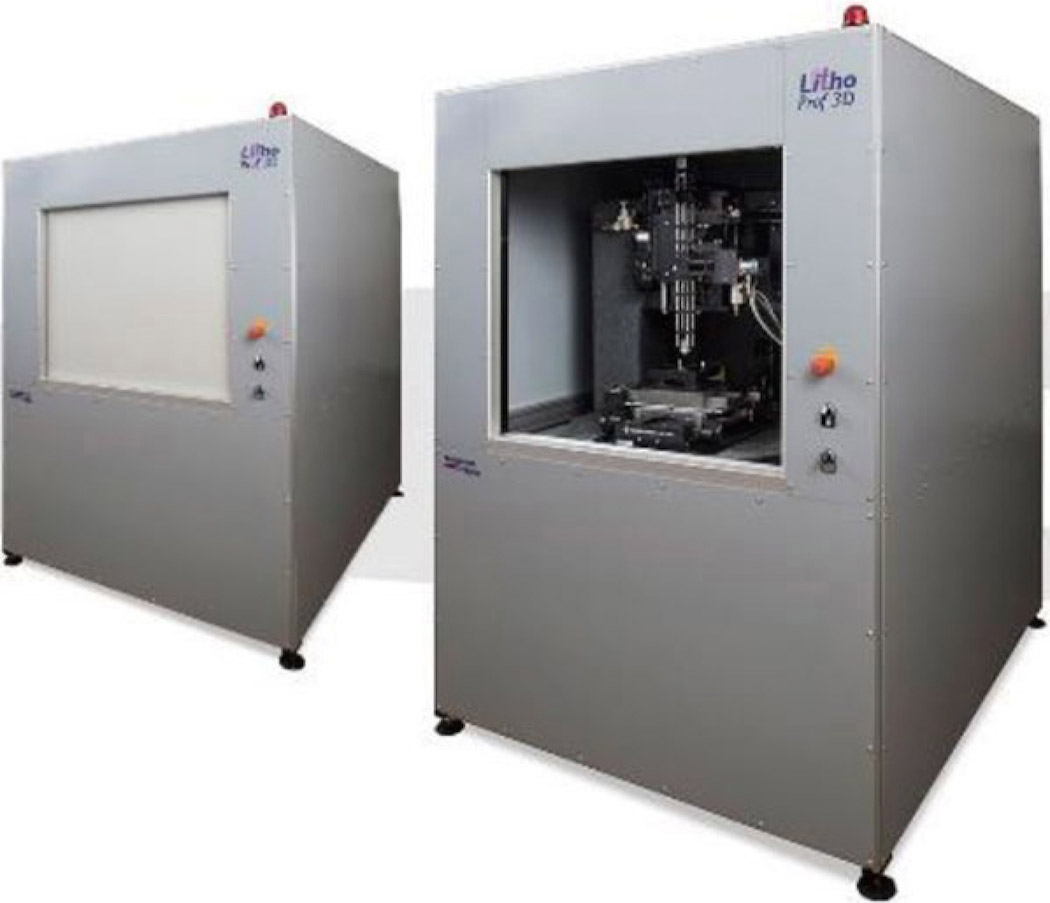 Although our equipment features a conventional slicing and hatching process (i.e., scanning the complete inner volume of a structure with stacked lines), it also provides several different fabrication strategies (e.g., contouring). In addition, it has different exposure modes, including standard top-illumination (suitable for air and oil-immersion objectives), as well as our patented LithoDILL3D (in which a photosenstive material is used as the immersion media), and LithoBath3D (i.e., inverted illumination into a reservoir that contains liquid material) technologies. Depending on the shape of the structure, these different exposure modes allow us to choose the best method for fabrication. For example, LithoBath3D is the appropriate fabrication mode for creating a large structure with the highest possible resolution. This is because the structure's height is not limited to the working distance of the high-numerical-aperture objective that simultaneously provides the smallest feature sizes.1 By using this strategy, we have previously demonstrated the first macro bodies (up to 2cm in height) with sub-micrometer features.4

Optical quality is of crucial importance for micro-optical elements (e.g., microlenses) in imaging and sensor applications. For instance, the surface roughness of the elements must be less than one-tenth of the operation wavelength (or better). To meet this requirement, typical TPP fabrication of microlenses (i.e., via slicing and hatching) can be very time consuming. With LithoProf3D, however, we have been able to create microlenses—with a root mean square roughness of 2–4nm (see Figure 3)—in a fabrication time that ranges from seconds to hours (depending on the geometry and level of sophistication of the lens). 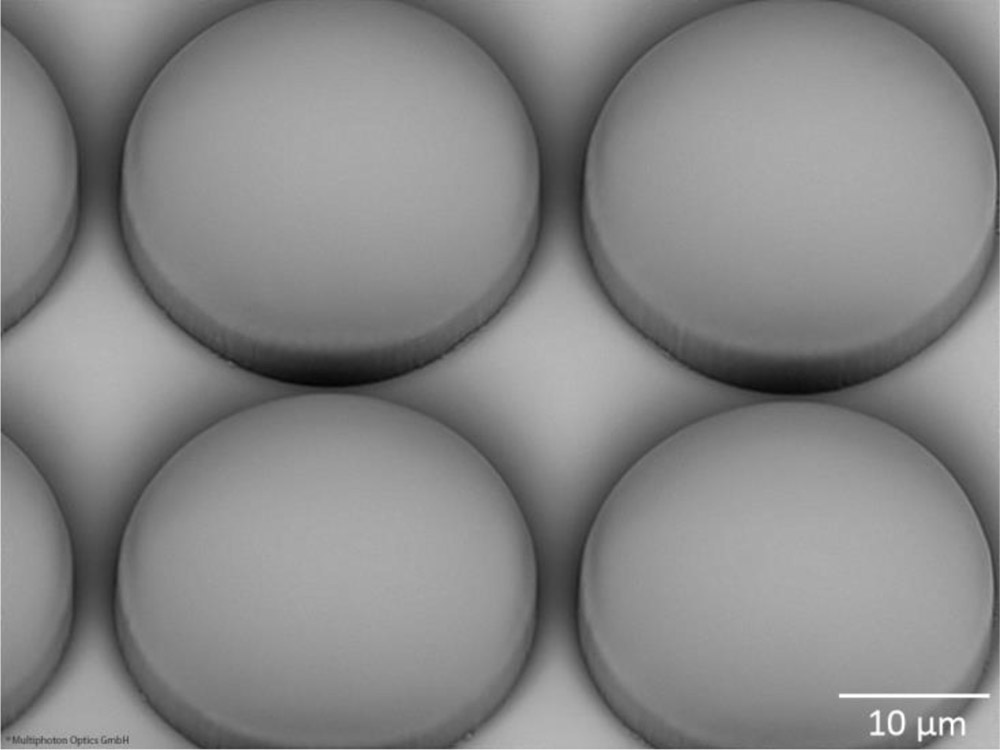 Figure 3. Microlenses (with a root mean square surface roughness of 2–4nm) that were created using the LithoProf3D instrument with a conventional hatch-slice strategy.

To achieve this improvement in fabrication time (i.e., to keep the fabrication times of the microlenses as short as possible), we have implemented different writing strategies in which only the outer shell of the microlens is polymerized. In addition, during the development process the structure is stable enough to enable finalization with a subsequent UV flash. Our access to the different strategies (e.g., scanning the shell with random circles or helical paths) also means we can reduce fabrication time by at least one order of magnitude, to shorter than seconds/minutes. Furthermore, we have implemented parallel fabrication (i.e., simultaneous fabrication of identical structures within the objective's field of view) to increase the throughput of our technique even further. This involves splitting the laser into an array of parallel beams, which speeds up fabrication by a factor corresponding to the number of beams.

In summary, we have developed a new high-precision 3D-printing platform (LithoProf3D) and associated printing processes to speed up the TPA additive fabrication approach for industrial purposes. We have implemented several exposure strategies and illumination modes that enable fast generation of structures even over large areas. In addition, our 3D technique fits perfectly with standard 2D processing (since our platform uses verified optics and microelectronics), and it can thus be combined easily with UV lithography, replication, and nanoimprint lithography (or classical 3D printing). Our equipment is also suitable for fast and automated material development by scientists. For example, the tool's unique parameter-search feature can be used for quick testing of the 3D capability of novel materials. Furthermore, our TPP 3D patterning and subtractive structuring capabilities can facilitate many novel industrial applications and products. Our ongoing work includes automated vision and structuring on-the-fly routines.

Ruth Houbertz is a physicist, the co-founder and chief executive officer of Multiphoton Optics, and has been the managing director since 2014. Between 2000 and 2012 she worked at the Fraunhofer Institute for Silicate Research (Germany) within various technical and management positions, and she previously worked at Sandia National Laboratories (Livermore, CA). She holds more than 90 patents and was a finalist for the 2015 Prism Award and the 2013 Green Photonics Award

Benedikt Stender has been the chief technical officer at Multiphoton Optics since 2016, and was previously an application engineer. He conducted his PhD research at the University of Würzburg, Germany, on single-photon sources and organic LEDs. He obtained his diploma in 2011, with work on ink-jet printed microlenses (as part of Ruth Houbertz's team). From 2008 to 2009 he was an intern at the University of British Columbia, Canada.