Advanced optical coatings for the discovery of gravitational waves

The first detection of gravitational waves (GWs) was made on 14 September 2015 and announced by the Laser Interferometer Gravitational-Wave Observatory (LIGO)–Virgo collaboration on 11 February 2016. This achievement is thought to represent one of the most challenging feats and important milestones in physics, and has given rise to a new branch of science (gravitational wave astronomy).1 Furthermore, because the effects of GWs are mechanical (i.e., bodies are deformed by the passage of a GW), by detecting this phenomenon we now have the ability to ‘listen’ to the universe rather than just gaze at it. Although the LIGO project began in 1992, the direct detection of GWs was not possible with the original LIGO setup because the instruments were not sufficiently sensitive.

The LIGO interferometer setup consists of two perpendicular ‘arms’ (each 4km long) that are optical Fabry-Pérot cavities. A laser beam is shone along these arms and reflected by mirrors at each end (a total of about 70 times, equal to a path length of about 300km). As a GW passes through the observatory's line of sight, it can be detected because the strain of space causes the arms of the interferometer to very slightly lengthen and shorten. The laser beam traveling between the mirrors thus travels different distances and the two beams are no longer in step, which gives rise to the measured interference patterns. The sensitivity of the original LIGO setup, however, was limited by the optical losses suffered by the mirrors. These optical losses had a number of sources, including absorption by the surface materials of the mirrors, aberrations that occur at each of the 70 reflections, as well as several internal and external noise sources. The most limiting of those noise sources was thermal noise in the cavity mirrors, which occurs in the most sensitive frequency band of the detector. This noise originates from the random rearrangement of molecules (structural relaxations) in the mirror materials when they are activated by thermal energy.

In this work we outline our efforts to develop advanced optical coatings to reduce the optical and mechanical losses of the LIGO mirrors.2, 3 We have conducted this work at the Laboratoire des Matériaux Avancés (LMA), France, after winning the contract to design the required optical and mechanical features for the Advanced LIGO (i.e., the LIGO upgrade that eventually led to the detection of GWs4) cavity optics. For this project, we thus built a 10m3 ion beam sputtering coating chamber (known as the Grand Coater) in which we can host two mirrors simultaneously (see Figure 1). In this chamber, the mirrors are subjected to a circular motion to ensure that the coating deposition on each mirror is alike and that the two cavities of each detector are therefore extremely symmetric. Indeed, to limit the aberrations that occur at each of the 70 LIGO mirror reflections, the uniformity of the coating thickness (over a 200mm diameter) must be within 0.1% (about 6nm) of the total thickness. 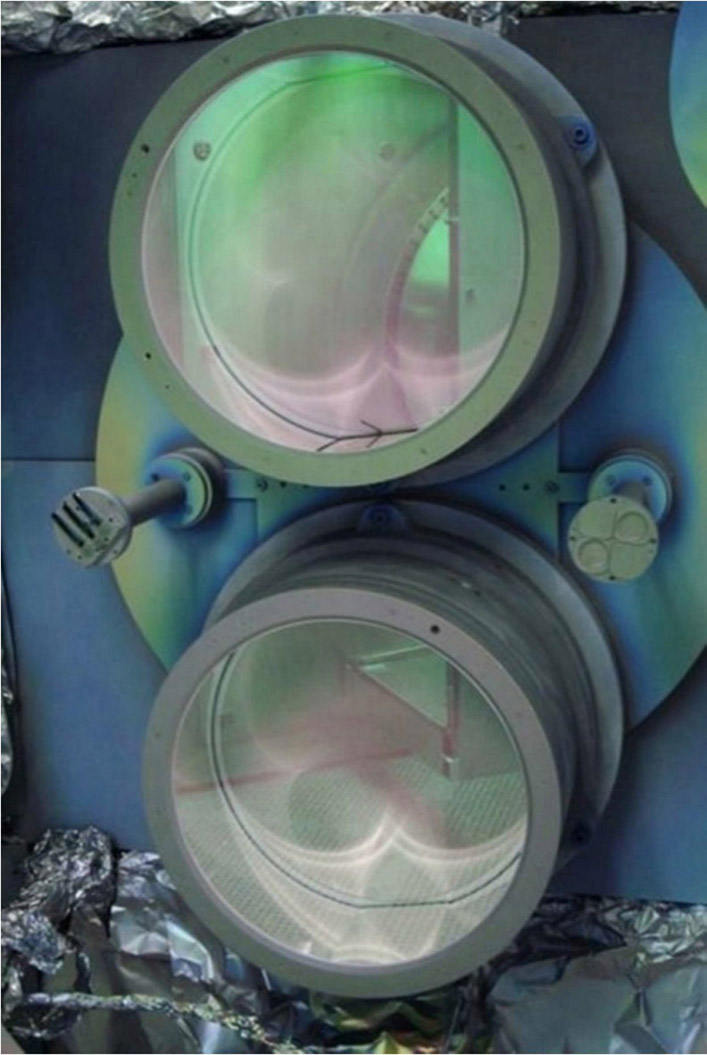 Figure 1. Photograph of two Advanced Laser Interferometer Gravitational-Wave Observatory (LIGO) cavity mirrors. These mirrors were treated in the ‘Grand Coater’ of the Laboratoire des Matériaux Avancés. The mirrors have a diameter of 35cm and a substrate (synthetic fused silica) thickness of 20cm. The large diameter (and a proper aspect ratio) is required to limit the thermal noise, and a large mass is necessary to limit the effect of radiation pressure fluctuations (caused by the quantum nature of light).

To achieve a roundtrip power loss for the arm cavities of less than 75ppm with the LIGO mirrors, their reflecting surfaces cannot be made of metal (because the optical loss caused by absorption would be at least 10,000ppm). As an alternative, a Bragg reflector coating for the mirrors is used. This coating consists of a stack of alternating layers of two glasses that have different refractive indices (see Figure 2). The glasses we use in our coatings are silica and a low-noise titania-doped tantalum oxide that we proposed and then optimized in collaboration with the University of Glasgow, UK.5 This mixture of glasses experiences fewer thermally activated structural relaxations than pure tantalum or titanium oxides. Moreover, the constructive interference of all reflected beams at each interface of the stack produces the desired reflectivity, with an extremely low absorption. We have also collaborated with researchers from the University of Sannio (Italy) to optimize the thickness of our coating layers so that we reduce the amount of the high-index material (i.e., titanium oxide/tantalum oxide) with respect to the low-index material (silica) as much as possible.6, 7 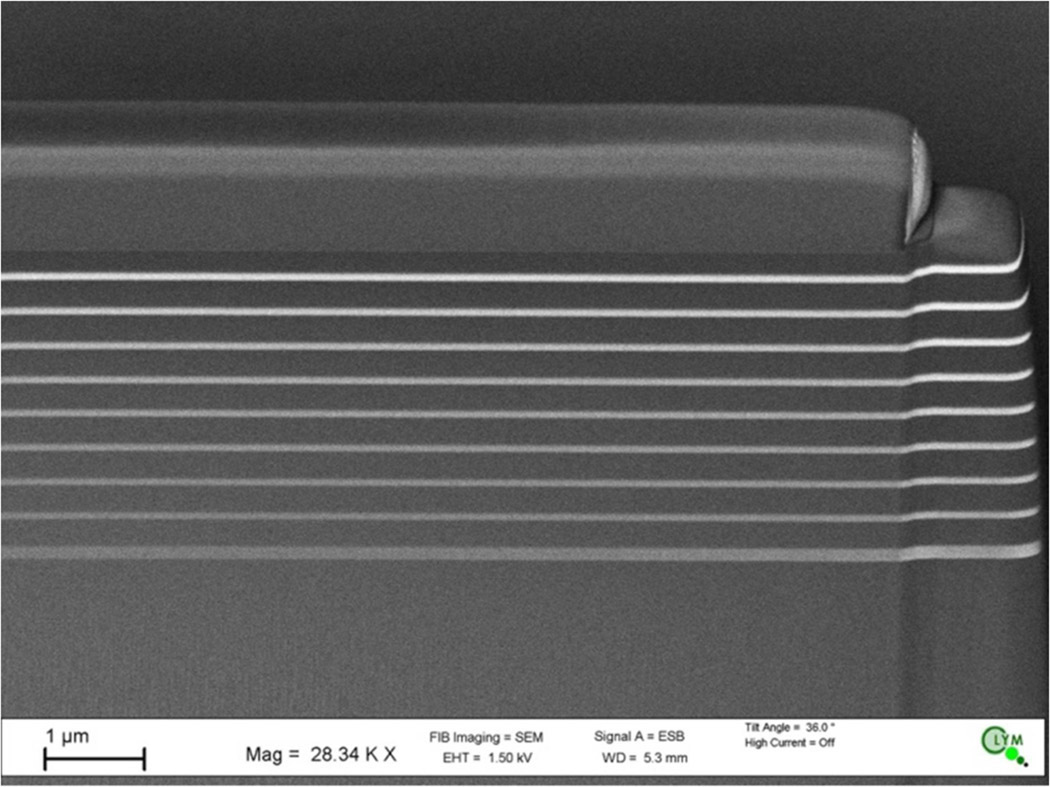 Figure 2. Scanning electron microscope image showing alternating layers of two glasses that are similar to those used in the LIGO mirror coatings. The darker layer is silica and the brighter layer is titania-doped tantalum oxide. In total, this highly reflecting stack consists of 36 layers and has a thickness of about 5.9μm. (Image provided courtesy of the Consortium Lyon Saint-Etienne de Microscopie.)

The coating thickness uniformity we achieve for the mirrors is illustrated in Figure 3. Our combined use of masking and circular motion during the coating process means that we create a spiral pattern—see Figure 4(a)—with a peak-to-valley amplitude of about 1.5nm and a spatial periodicity of 8mm. The consequent aberration of the reflected wavefront, although very small, gives rise to a scattering cone that couples one cavity mirror to the other (via reflection from the non-seismic isolated vacuum tube baffles). In this way, excess phase noise on the light is introduced inside the interferometer: see Figure 4(c). To solve this problem, we thus make two spiral patterns that destructively interfere (i.e., by shifting one by 4mm with respect to the other): see Figure 4(b).8 The final absorption in all our coated mirrors is well below 1ppm (see Figure 5), i.e., the limit required for the Advanced LIGO project. 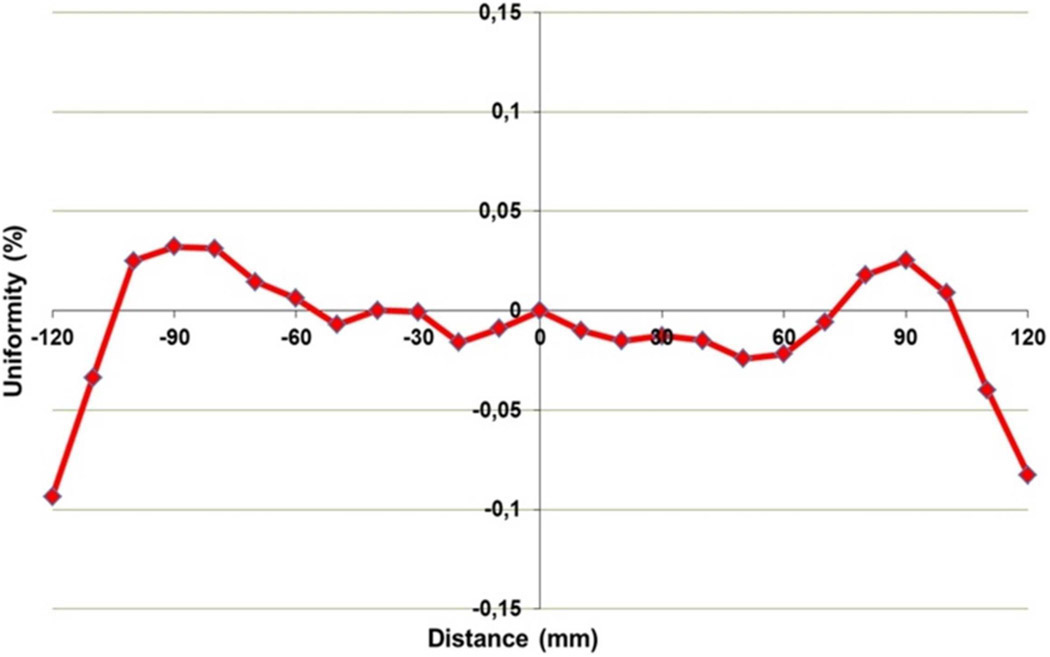 Figure 3. Relative variation of the coating thickness (total thickness is about 5.9μm) measured along the diameter of one highly reflecting mirror. 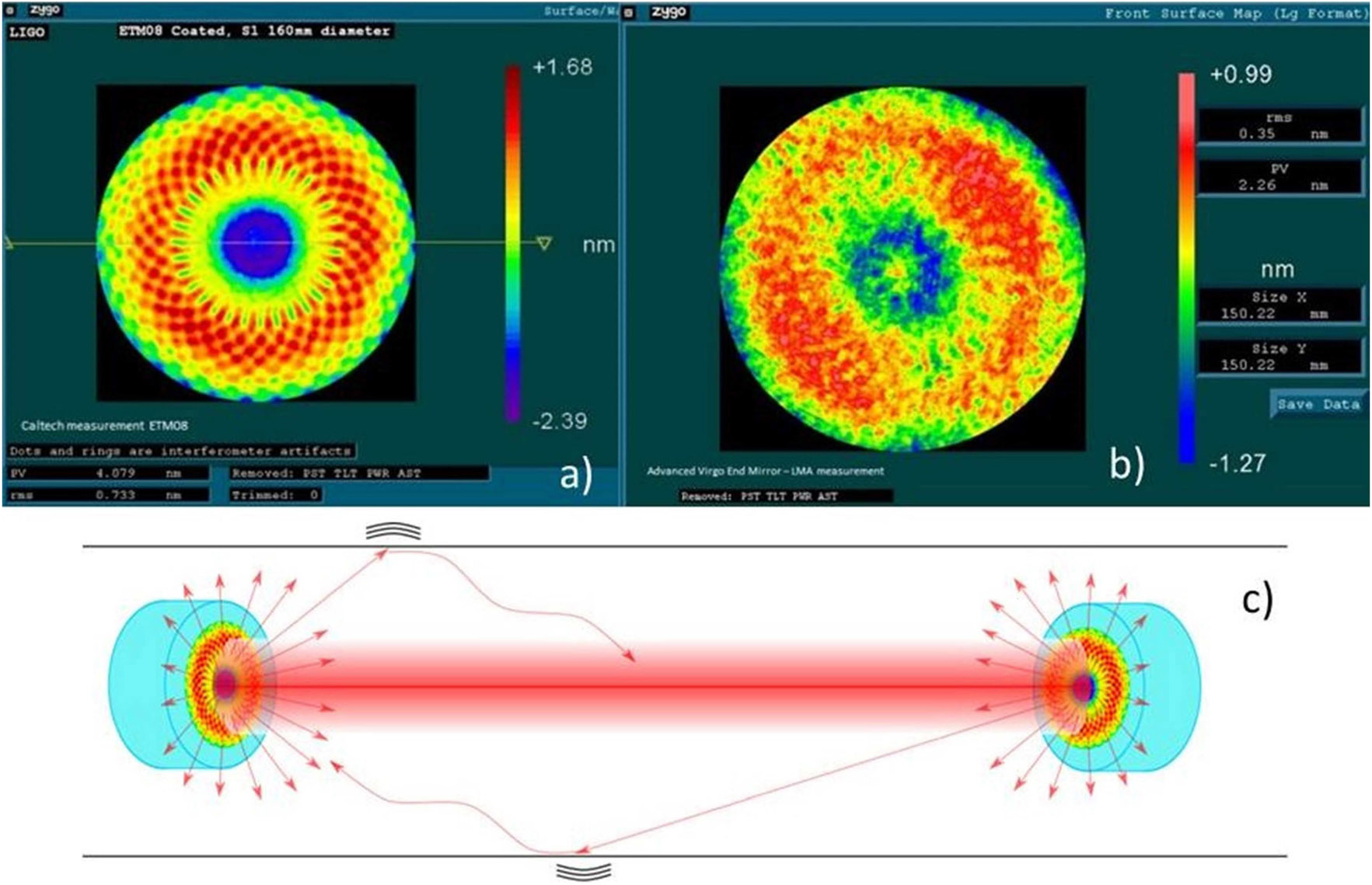 Figure 4. Wavefront distortion measured (with a ZYGO interferometer) on a 150mm-diameter coated mirror before (a) and after (b) the spiral pattern was reduced. The spiral pattern in (a) can cause the coupling of two mirrors via noisy light reflection, as illustrated in (c). This scattering pattern causes light to leak out and enter into the optical path. 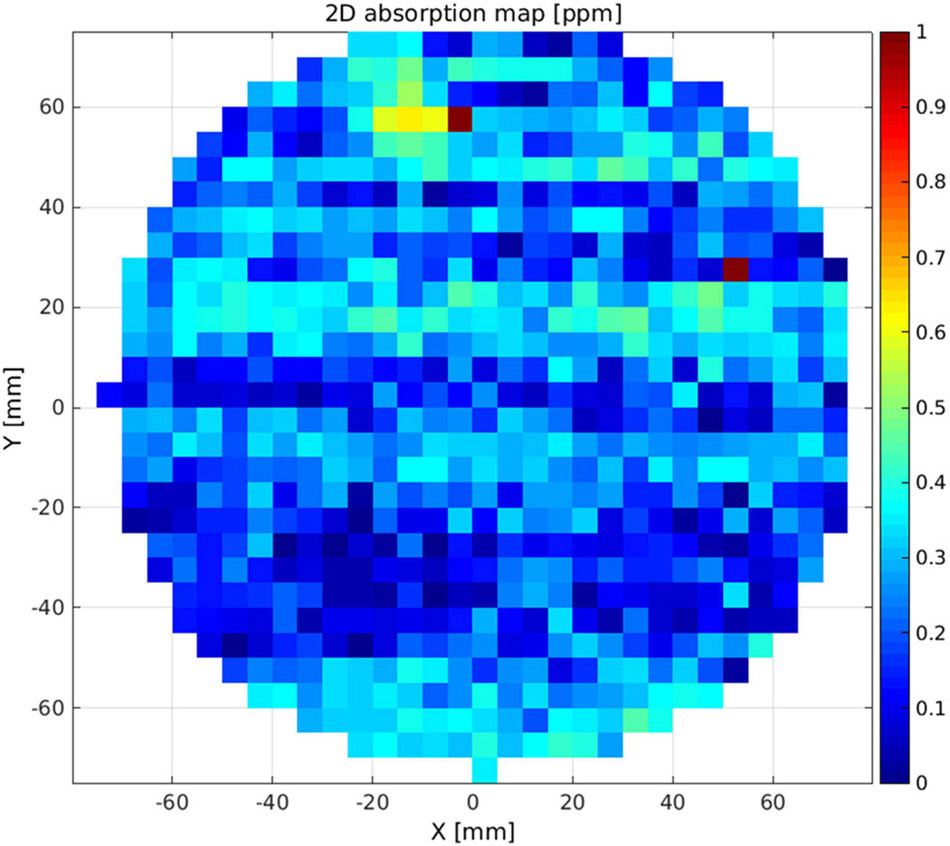 In summary, we have developed state-of-the-art Bragg-reflector coatings that can be used to reduce the optical losses of mirrors. In particular, the coatings we have produced have been used to increase the sensitivity of detection for the Advanced LIGO and have thus enabled the recent groundbreaking observation of gravitational waves. In our ongoing work, we are developing the coatings that will be used on the mirrors for the Japanese Kamioka Gravitational Wave Detector project. In this case, our coatings will operate at cryogenic temperatures and will involve the use of sapphire substrates. We have also started to investigate new materials and processes that may be suitable for our coatings, as well as the origin of thermal noise in amorphous materials. In addition, we continue to improve the thickness uniformity and optical control of deposition we can achieve with our coating technique.9

Gianpietro Cagnoli is a professor of physics at Claude Bernard Lyon 1 University and the director of the LMA. His expertise is in the fields of thermal noise in mechanical experiments and of low-noise materials.

Laurent Pinard is the chief engineer and the head of the metrology service at LMA. He is an expert on optical metrology and coating development. He is also the coordinator of the Advanced Virgo detector subsystem, and in charge of its mirrors.

Christophe Michel is responsible for the infrastructure of LMA (and head of the laboratory's process service) and for the coating of the main optics in the gravitational wave detectors. His main expertise is in coating development.

Benoit Sassolas is an expert in the simulation of coating deposition and coating development. At LMA he is the coordinator of the Large Synoptic Survey Telescope activity.

Jérôme Degallaix is a physics researcher, with expertise in optical simulation. He is also the coordinator of the Advanced Virgo Optical Design and simulation detector system.

Massimo Granata is a research engineer. He is an expert on the mechanical characterization of coatings and thermal-noise-related issues.

Danièle Forest is an assistant engineer and an expert on optical metrology, spectrophotometry, absorption, point defect detection, and roughness.