The growing demands for high-speed data communications (e.g., for the Internet) have greatly exceeded all predictions, and have thus greatly accelerated research and development activities for next-generation wireless communication systems.1, 2 As part of these efforts, visible light communication (VLC)—in which electromagnetic radiation at visible wavelengths (380–700nm) is used, rather than conventional radio frequency (RF) waves—has recently been proposed as a promising technology for enabling simultaneous energy-efficient illumination and high-speed data communication. Indeed, VLC has several advantages over conventional RF-based communication systems, including high security, fast speed, as well as an unregulated and uncrowded bandwidth. In a typical VLC system, LEDs or laser diodes (LDs) with phosphors (i.e., blue, green, and yellow/red color converters) are used in the transmitters to generate white light for solid-state light (SSL) and data communications.3, 4 There is, however, a phosphor-associated limitation in the modulation bandwidth of the VLC system. That is, the long excited-state lifetime (the time it takes to re-emit an absorbed photon) of conventional yttrium-aluminum-garnet (YAG)-based phosphors gives rise to a serious bottleneck in VLC applications.5 This phosphor-associated bandwidth thus limits VLC systems to about 10MHz and nullifies its key advantages over RF communication systems.4, 6

In our work,6 we have therefore investigated the fast color-conversion behavior of CsPbBr3 perovskite NCs when they are used as a phosphor for white light transmission in an SSL-VLC dual-function system. Our perovskite NCs are inexpensive and relatively easy to prepare (i.e., in a toluene solution). In our study, we synthesized CsPbBr3 perovskite NCs that have a cubic shape and average dimensions of about 80nm (see Figure 1). We have also used time-resolved laser spectroscopy to study the excited-state dynamics of our NCs because this is the key characteristic for fast-response color-conversion materials. We measured a relatively short PL lifetime of about 7ns, which indicates that our materials outperform conventional phosphors (with PL lifetimes on the order of microseconds). 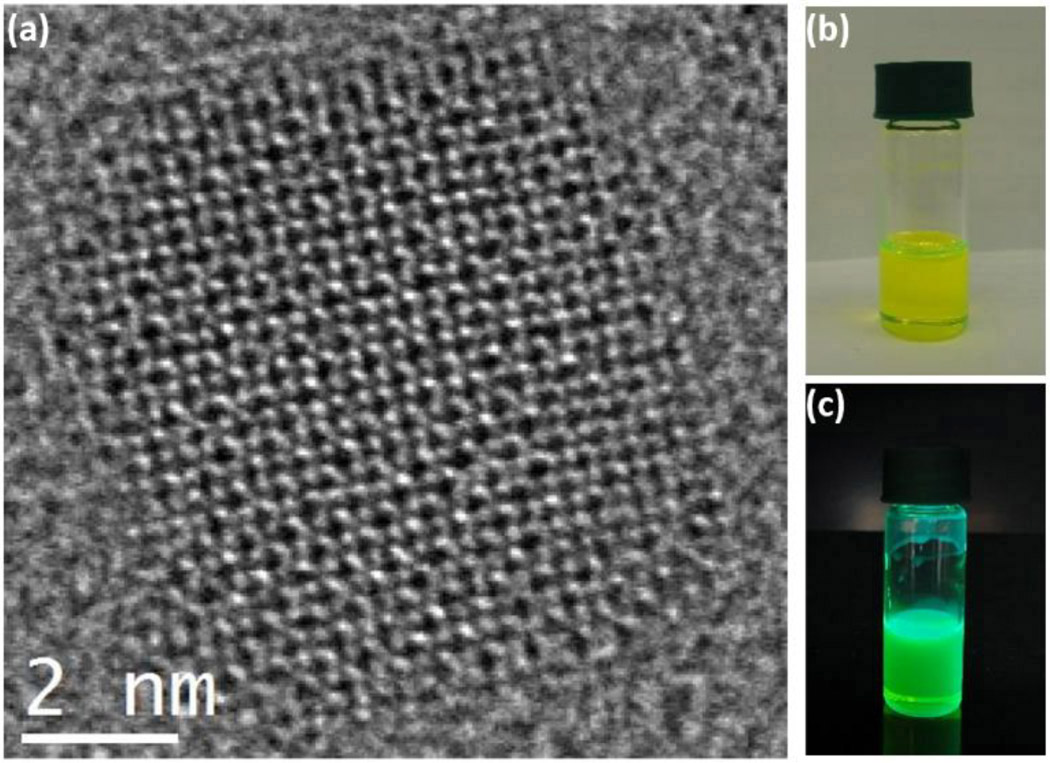 Figure 1. Illustrations of the cesium lead bromide (CsPbBr3) perovskite nanocrystals (NCs). (a) High-resolution transmission microscopy image of the NCs. Photographic images of the NCs in a toluene solution are also shown, under (b) ambient light and (c) UV illumination.

As part of our work we mixed our synthesized green-emitting perovksite NCs with a conventional red phosphor to attain white light. We excited the mixture with the use of an indium-gallium-nitride-based blue LD, and thus produced a warm white light. The corresponding chromaticity coordinates (0.38, 0.30) of this light are presented—within the International Commission on Illumination (CIE) 1931 color space—in Figure 2. We find that the converted light exhibits a correlated color temperature of 3236K, which mimics warm sunlight. The converted light also has a high color-rendering index of 89, which is better than white light produced from a yellow YAG phosphor alone. When the blue light excites an electron within the NCs, an electron-hole pair (known as an exciton) is formed. The small size of our NCs, however, means that the exciton energy levels are changed. This makes the electron more likely to recombine with its hole and emit a photon (in the green color regime). This result indicates that our high-quality perovskite NCs are a cost-effective color-converter option for laser-based indoor illumination. In addition, by varying the chemical composition of our perovskite NCs (e.g., by substituting different halides or metal ions), we can achieve flexible fine tuning of the color. 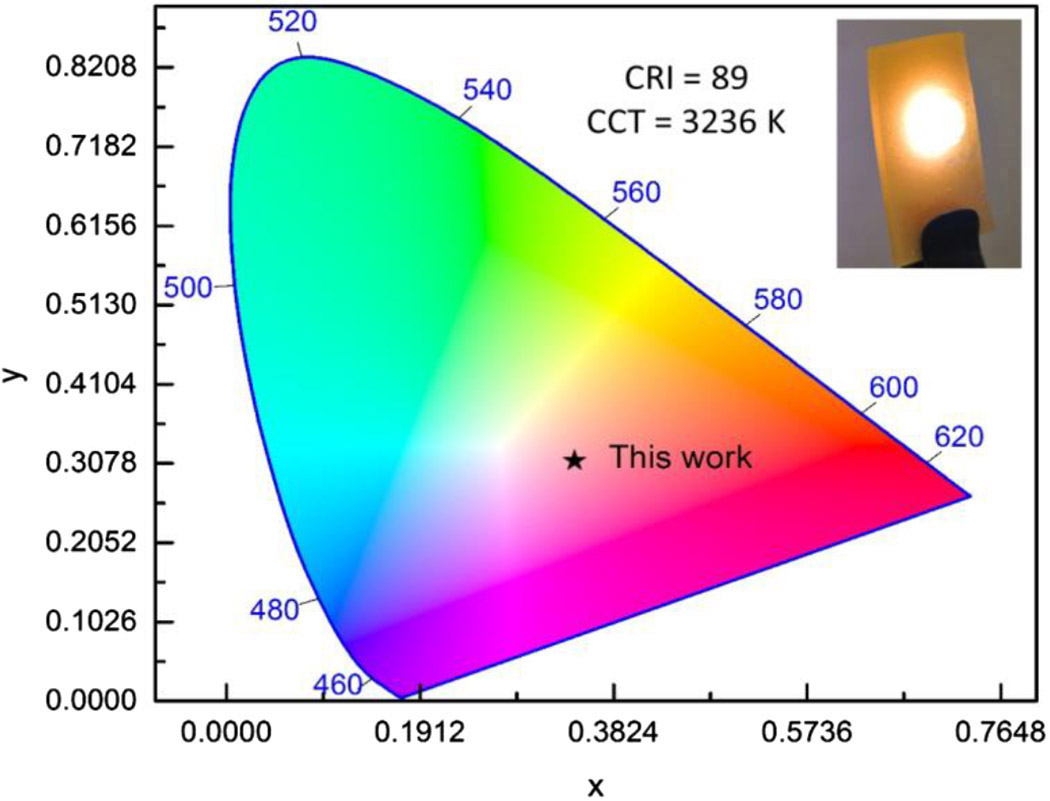 Figure 2. White light generated from the CsPbBr3perovskite NCs has chromacity (x, y) coordinates of 0.38, 0.30 in the International Commission of Illumination (CIE) 1931 color space, as well as a color-rendering index (CRI) of 89 and a correlated color temperature (CCT) of 3236K. Inset: Photograph of the white light generated from a mixture of green-emitting perovskite NC phosphor and a red-emitting nitride phosphor (collectively excited by blue laser light).

We have also performed a small-signal frequency-response measurement to assess the modulation bandwidth of the white light that is generated from our CsPbBr3-NC-based color converter. Although the conventional red-emitting phosphor that we use in the system only provides a limited bandwidth of about 12MHz, our additional use of the perovskites produces a greatly increased bandwidth of about 491MHz. Our new color converters can thus provide a bandwidth that is 40 times that of commercial phosphors. This is especially important in the current bandwidth-hungry era, when there is a continuous push for VLC systems that have ever-higher bit rates. In addition, high-speed LDs will eventually replace LEDs for the generation of white light in VLC systems. Our work therefore represents progress toward the development of NCs that convert high-energy photons from violet-blue LDs to red-yellow-green lights with ultrashort photon lifetimes.

In the last part of our study, we demonstrated that our novel VLC system has a data transmission rate of 2Gb/s when we use a non-return-to-zero on-off keying modulation scheme. We also tested the corresponding bit error rate (BER) at the same time, to verify that an error-free communication link could be established. At data rates of 1, 1.5, and 2Gb/s, we thus obtained a BER of 1.2 × 10−7, 3.4 × 10−7, and 7.4 × 10−5, respectively, all of which easily pass the forward error-correction limit (with BER ≤ 3.8 × 10−3).

In summary, we have synthesized CsPbBr3 perovskite NCs and have studied their use as a phosphor for white-light transmission. Our results indicate that these NCs have short photoluminescence lifetimes. In addition, the converted white light has a correlated color temperature similar to that of warm sunlight and a high color-rendering index. Moreover, our color converters have modulation bandwidths that are 40 times greater than those of conventional phosphors and we have demonstrated ultrafast data transfer rates. Our NC-based color converters thus present a new platform for next-generation SSL-VLC systems that offer simultaneous high-brightness lighting and Gb/s data transfer rates. In the near term, we plan to further improve the light-conversion yield of our nanocrystals, i.e., to produce near-ideal white light with a color-rendering index close to 100, while also being able to transmit data at bit rates of multi-gigabits per second.

Ibrahim Dursun is currently pursuing his PhD. He is working on a solution-processable hybrid perovskite for light-emissive applications. He previously obtained a master's in optics and photonics from Aix-Marseille University (France) and the Karlsruhe Institute of Technology (Germany) in 2013. He completed his undergraduate studies in physics at Izmir Institute of Technology (Turkey) in 2011.

Osman Bakr is an associate professor of materials science and engineering. He has a BSc in materials science and engineering from the Massachusetts Institute of Technology (2003), as well as an MS and a PhD in applied physics from Harvard University (2009). His research group focuses on the study of hybrid organic–inorganic materials, particularly by advancing their synthesis and self-assembly for applications in photovoltaics and optoelectronics.

Chao Shen received his BSc in materials physics from Fudan University, China, in 2011, and is currently a PhD candidate. His research interests include III-nitride laser diodes, superluminescent diodes, and micro-LEDs, as well as their applications for solid-state lighting, visible light communications, and photonic integrated circuits.

Boon Ooi is a professor of electrical engineering. His research is focused on the development of gallium-nitride-based LEDs and lasers, as well as visible light communications. He is a fellow of SPIE.