The modulation and allocation of optimized multiplexed subcarriers in short-range data networks, based on a directly modulated bandwidth-limited optical source, enables the transfer of 25Gb/s over 20km of fiber.
18 April 2017
Alberto Gatto, Debora Argenio and Pierpaolo Boffi

Multicarrier modulation is a technique for increasing the amount of information that can be transported by a communication system (i.e., the capacity). The approach is based on splitting a high-bit-rate signal into hundreds of orthogonal sub-carriers, each with a very low symbol rate. The exploitation of this technique in short-range data networks can hugely increase the throughput of a single optical link, thereby removing the need for high-complexity and high-performance components.1 Future low-cost, energy-efficient datacenters and access networks that employ this modulation technique could therefore operate at very high bit rates by using cost-effective and bandwidth-limited optical sources.

For short-range data network scenarios, as well as for long- and medium-range networks, optical communications represent the most promising solution for both professional and consumer applications. Compared with optical transport networks, however, short-reach networks are much more sensitive to cost, footprint, and power consumption. For these reasons, such networks require the use of cost-effective and energy-efficient optical sources—such as vertical-cavity surface-emitting lasers (VCSELs)—combined with direct intensity modulation (IM) and direct detection (DD).2 In the near future, however, these requirements could be met by using standard and low-cost devices with limited electro-optical (E/O) bandwidths. Key to achieving this is a drastic increase in the spectral efficiency of the transmitted signal from the current standard (i.e., 0.5bit/s/Hz, achieved with on-off-keying transmission). Two different modulation methods—i.e., orthogonal frequency division multiplexing and discrete multitone modulation—have recently been proposed as a way to enhance the transported capacity. Both approaches enable modulated data to be carried on several parallel channels.3 However, the complexity of the transmission systems, the need for massive digital-signal processing, and the non-idealities that arise during operation could limit the realistic exploitation of these methods in short-reach networks.4, 5

In our work,6,7 we propose a different multicarrier approach, based on frequency division multiplexing (FDM). Our technique retains the advantages of multicarrier modulation, but reduces non-idealities and transmission-system complexity by limiting the number of sub-carriers. We used a long-wavelength VCSEL, characterized by a very limited bandwidth (of around 5GHz), to highlight the huge enhancement to the capacity of transported information that our technique enables.

Of all channel distortion types, we hoped particularly to mitigate chromatic dispersion. This type of distortion causes each spectral component of the modulated signal to accumulate a different phase modulation after propagation through fiber, thereby causing significant deterioration of the transmitted signal (i.e., via destructive interference). Direct modulation gives rise to a double-sideband optical spectrum, as we are only modulating the intensity of the optical field. Because of this, the electrical spectrum of the modulation signal is real (i.e., it shows an even parity with respect to the continuous-wave component). After modulation, the optical spectrum could therefore be considered a replica of the electrical spectrum, shifted at the frequency of the optical carrier (i.e., it shows an even parity with respect to the optical carrier). Since the phase modulation that is induced by chromatic dispersion has no even parity with respect to the optical carrier, destructive interference occurs. This results in a frequency-selective channel that induces significant distortions to the signal spectrum and imposes a limit on the maximum transported capacity.8 We observed that the frequency of the fading dips (i.e., the minimums in signal strength) depends on the cumulated chromatic dispersion. Higher dispersion causes a move toward lower frequencies, thereby reducing the undistorted region of the electrical spectrum (see Figure 1). 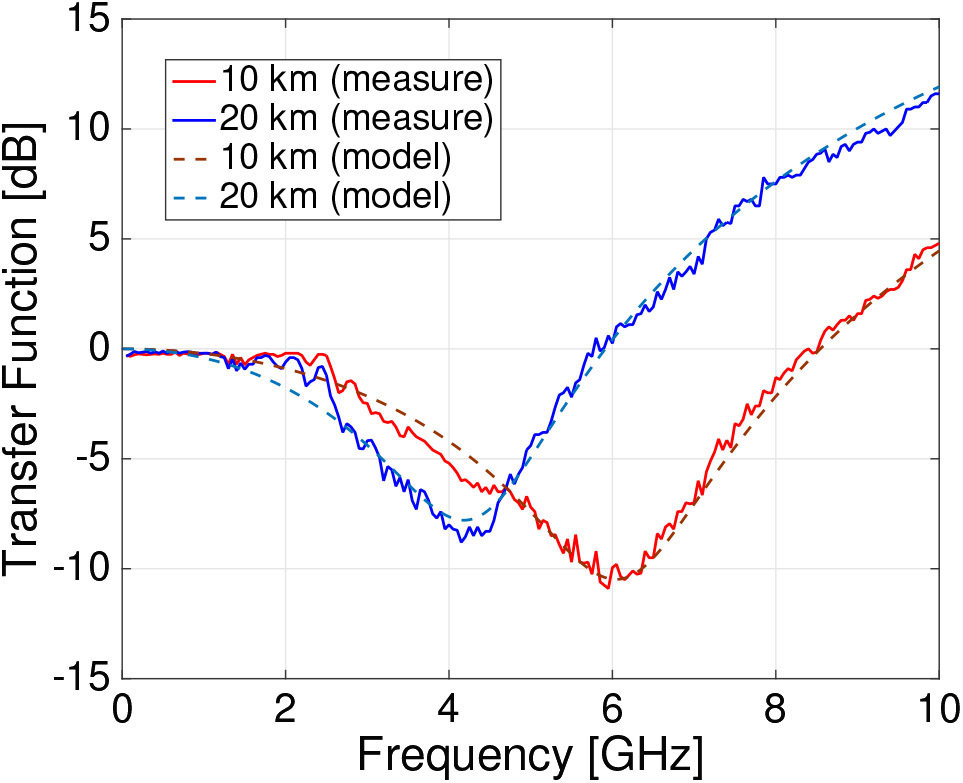 To overcome the channel distortion and limited E/O bandwidth of the VCSEL source, we performed a tailored allocation of the sub-bands. We modulated every sub-band at a rate of 1Gbaud. Because we employed Nyquist shaping of the modulating symbol pattern for every sub-band (i.e., with a roll-off factor of 0), all sub-bands acquire a rectangular-shaped spectrum and can therefore fill 1GHz of the electrical spectrum, removing the need for an inter-subcarrier guard-band. Hence, the FDM signal consists of 10 subcarriers filling a frequency range of 10GHz. We also achieve a trade-off between the modulation order, subcarrier power, and bit error rate (BER) that are associated with the single subcarrier. At lower frequencies, we exploit a higher-order modulation format, such as 16-QAM (16 quadrature amplitude modulation), to maximize the transported capacity. The spectral dips, on the other hand, are filled by robust FDM sub-bands with lower spectral efficiency—such as BPSK (binary phase-shift keying)—to limit the impact of frequency fading.

To test our approach, we performed the same procedure for different propagation lengths, with transmission distances ranging from 100m (a distance typical for intra-datacenter communications) to 20km, through standard single-mode fiber (SSMF). The received electrical spectra and relative BERs are shown in Figure 2. As a result of the equalization and tailored modulation assignment that we implemented, no significant difference is visible among the sub-bands, and all 10 FDM subcarriers satisfy the BER target that is required for the exploitation of an advanced FEC (forward-error-correction) code (with a 7% overhead). Depending on the propagation distance, the transmitted capacity ranges from 34Gb/s over 100m to 25Gb/s for 20km propagation. 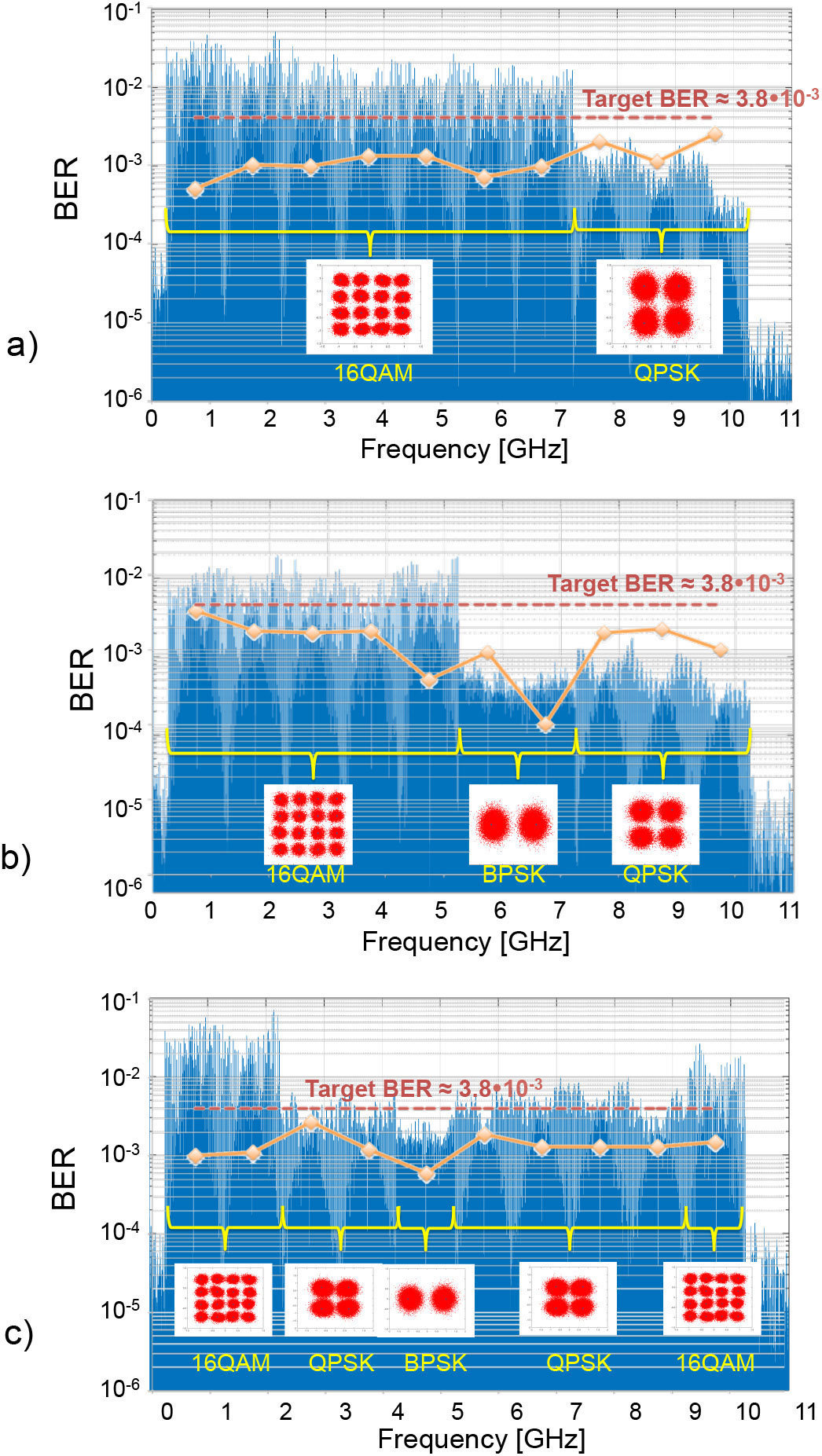 In summary, we have demonstrated short-range transmission based on the employment of a bandwidth-limited VCSEL combined with direct IM and DD. Our technique exploits a novel multicarrier approach to achieve very high transported throughput. VCSEL band limitation can be overcome, and the non-uniform frequency response of the system can be matched by tailoring the FDM subcarrier allocation. Our technique therefore increases the spectral efficiency by a factor of 3.4, 2.8, and 2.5 over 0.1, 10, and 20km of uncompensated SSMF, respectively, compared with the standard optical transmission system (i.e., an on-off keying transmission system with an efficiency of 0.5bit/s/Hz). In our future research, we will focus on the comparison between FDM and other multicarrier techniques, and on achieving further capacity increases by using different optical sources.

This work was supported by MIUR through the ROAD-NGN project (PRIN2010-2011). The authors would like to thank VERTILAS for support with experimentation.

Alberto Gatto received his PhD in information technology from Politecnico di Milano in 2011. His research interests include the analysis of short-reach optical systems with advanced modulation schemes, the evaluation of novel optical front-haul architectures for 5G applications, and the analysis of optical vortices for future mode-division multiplexing systems.