Compact dielectric and plasmonic slot waveguides have low loss characteristics and can be fabricated in a CMOS-compatible manner, and are thus suitable for integration in modern integrated circuits.
15 March 2017
Yehea Ismail, Hosam Mekawey, Rania Gamal and Mohamed A. Swillam

With the continuous scaling down of integrated-circuit (IC) technology and its associated electronics components—combined with the increase in circuit complexity and functionality—circuit interconnects pose a consistently increasing challenge and present a critical bottleneck in further downscaling. The problem arises because having more wires in the same amount of space means that the wires must have smaller dimensions, but reducing the width of wires causes an increase in their resistance. Furthermore, making wires taller to mitigate the increased resistance problem comes at a tradeoff of increased capacitance between the wires as they get too close to each other.1 Undesirable signal coupling between neighboring wires adds noise and is thus also a significant issue. It is thought that the use of optical interconnects could be a solution to the interconnect problem in electronic circuits.2 The main drawback to this approach, however, has been that optical waveguides are generally larger than their electrical counterparts (i.e., often having widths of several micrometers to accommodate light at near-IR wavelengths).3 In addition, the distance between waveguides has to be several micrometers to avoid undesired coupling.

One promising approach to enable further miniaturization of optical interconnects is the use of plasmonics (i.e., phenomena that occur at the surfaces of noble metals such as silver and gold, or more specifically at the interface between a noble metal and a dielectric material). Plasmonics can be used to guide and manipulate light at the surface of metals (possible because of coupling between metal electrons at the surface and photons incident on the surface). Plasmonics can thus be used to achieve nanoscale confinement of light in gaps between two metal surfaces (such tight confinement is not possible with the use of traditional non-plasmonic waveguides). In addition, it provides a new approach for miniaturization of photonic devices to nanoscale dimensions and opens up the possibility of building interconnects with dimensions that match those of electronic components. Silicon photonics can also be used to make optical interconnects a reality for modern commercial ICs. Indeed, over the last few years, many researchers have been striving to build (by exploiting the standard IC-fabrication process) silicon-based optical components and devices that are fully compatible with electronic components.

In our work, we aim to combine the benefits of silicon photonics and plasmonics. For these endeavors, we use doped silicon so that the number of free carriers in the silicon approaches the number of free carriers in metals (i.e., required for plasmonics) and thus enables plasmonics-based phenomena in the silicon.4 Furthermore, by controlling the silicon doping level, we can tune the plasma resonance so that it occurs in the spectral range of interest.5 In particular, we focus on the mid-IR spectrum, i.e., where surface plasma polaritons (SPPs) can be induced with the use of doped silicon.5

In a recent study, we investigated different silicon-based waveguides (with compact dimensions) and the effect of doping on their plasmonic-guided modes.6 We find that both a plasmonic slot waveguide and dielectric slot waveguide (see Figure 1) are promising options for addressing the optical interconnect problem. This is because the slot waveguides provide high levels of confinement and they have a small footprint (matching current dimensions in modern IC technology). Moreover, our silicon-based waveguides support a plasmonic-like mode, with nanoscale confinement, at mid-IR wavelengths.6, 7 For our plasmonic slot waveguide, the light confinement occurs in the area that is filled by the guided liquid/gas that is to be sensed. This gives rise to a large overlap between the confined light and the target material, and the device sensitivity is therefore maximized.6 The plasmonic slot waveguide thus has the potential for significant applications in chemical and biological sensing (in addition to interconnect applications). 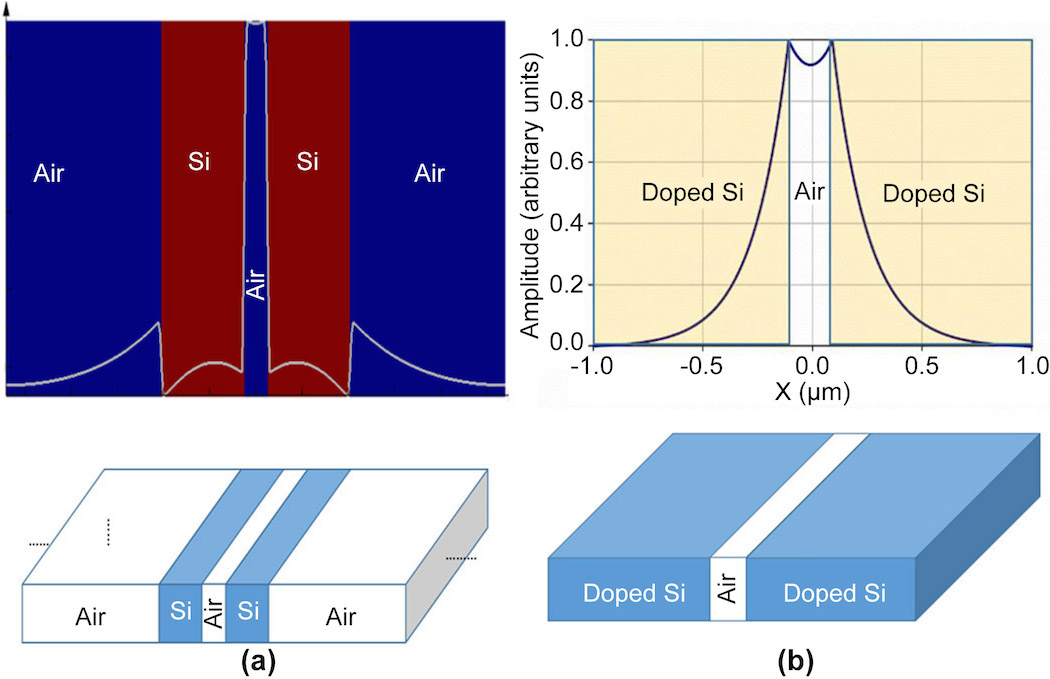 The results of our studies6 also demonstrate the great potential of the silicon-based slot waveguide as an optical interconnect, i.e., in terms of its dimensions, propagation losses, and its ability to slow light. Indeed, in our latest work,6 we have shown (see Figure 2) that the plasmonic slot waveguide exhibits an excellent capability for slowing guided light inside it (due to the larger losses in doped silicon compared with intrinsic silicon). Optical interconnect applications that have the capability to slow light are advantageous because the effective photon–material interaction length inside an active device is increased.8 Therefore, when silicon that has a slightly changed refractive index (i.e., from doping) is used to form the plasmonic slot waveguide, the increase in effective photon–material interaction length means that the slightly changed refractive index has a greater impact. 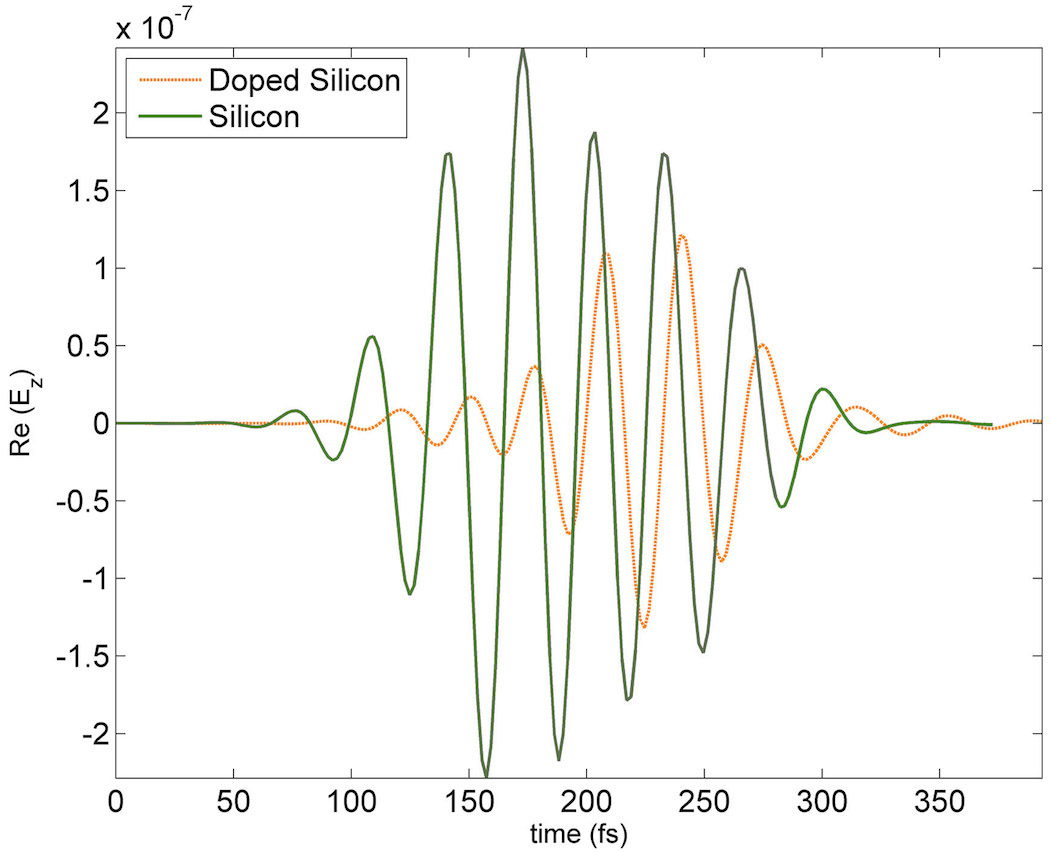 In summary, we have conducted a number of studies in which we combine the fields of silicon photonics and plasmonics to address the interconnect problem in integrated-circuit technology. In particular, we find that a plasmonic slot waveguide and a dielectric slot waveguide are promising options for solving this electronics problem. Such optical interconnects are likely to play a revolutionary role in the electronics industry for everyday electronic devices. In our future work in this area, we will continue to focus on slot waveguides and silicon photonics. Ultimately, we hope to realize a fully operational, CMOS-compatible, and cost-effective optical interconnect waveguide design.

Hosam Mekawey has a BS (computer science major) and a master's degree from Ain Shams University, Egypt. Between 2008 and 2012 he worked as a software engineer at Microscoft's headquarters in Washington. Since then, he has been working in the field of nanophotonics and plasmonics, as part of his PhD studies and his research duties. His current research is focused on the fields of nanotechnology, sensing applications, and renewable energy.