The emerging research field of magnonics (i.e., combining waves and magnetism) provides a new paradigm for information technologies. That is, information can be encoded in coherent spin waves (rather than on moving electrons) that do not suffer from ohmic losses. In the context of transmitting and processing information, it is therefore necessary to find energy-efficient means to enable complex spin-wave circuits that have a high integration density. However, the anisotropic and magnetic-field-dependent propagation characteristics of spin waves mean that it remains a challenge to steer them on the nanometer scale and that many concepts, such as simple geometrical shaping of spin-wave conduits (e.g., bended waveguides), are hindered.

To date various on-chip schemes have been explored for guiding spin waves. These methods include the use of waveguides with spatially rotating fields1, 2 or the use of magnetic field wells.3 Most of these concepts, however, are limited in their capacity for further optimization, and they rely on energy-consuming fields/currents. For magnonics-based devices to become fully competitive, novel schemes for channeling spin waves within a few nanometers are thus required.

In our work, we make use of the fact that magnetic domain walls (also known as Néel walls)—which form at the interfaces between regions of different magnetic orientation (domains)—create magnetic field inhomogeneities. These inhomogeneities thus act as potential wells and can be used to effectively confine spin waves on very small length scales. Their width is a fundamental material parameter and is typically on the range of tens of nanometers (it may be possible to tune them to even smaller sizes). In this study,4, 5 we report an experimental observation of channeled spin-wave propagation within naturally forming magnetic domain walls. This phenomenon has previously been predicted by theory6 and simulations,7, 8 but our work represents its first experimental verification.

In particular, we use both Brillouin light scattering microscopy9 and micromagnetic simulations10 to observe spin-wave transport inside Néel walls that occurred in 40nm-thick ferromagnetic microstructures. These channels are promising candidates for use in energy-efficient flexible designs because they do not require energy to guide spin waves on the nanoscale, and because they can be manipulated in a variety of ways. We report only selected experimental data in this article, but refer to our original publication4 for further information.

During our experiments, we stabilized a well-defined 180° domain wall (i.e., which separated upward- and downward-oriented domains) in a magnetic bottle-shaped carrier structure along its center (see Figure 1). We used Kerr microscopy to record the magnetic contrast of the structure and to thus determine the domain configuration. We also used a microwave antenna on top of the carrier structure to locally excite spin waves. The spin-wave intensity that we recorded (see Figure 2) reveals a spin-wave beam within the domain wall, which originated from the antenna. 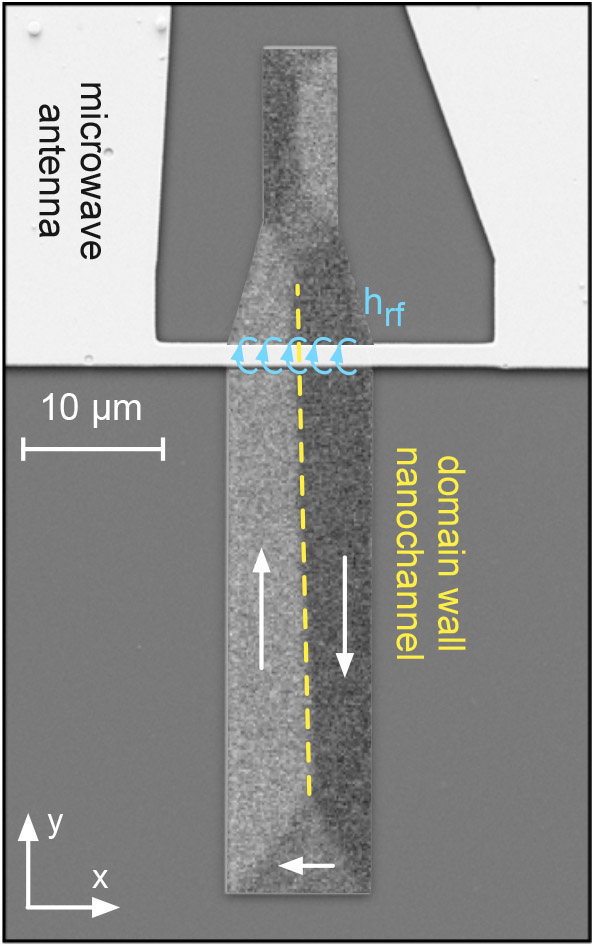 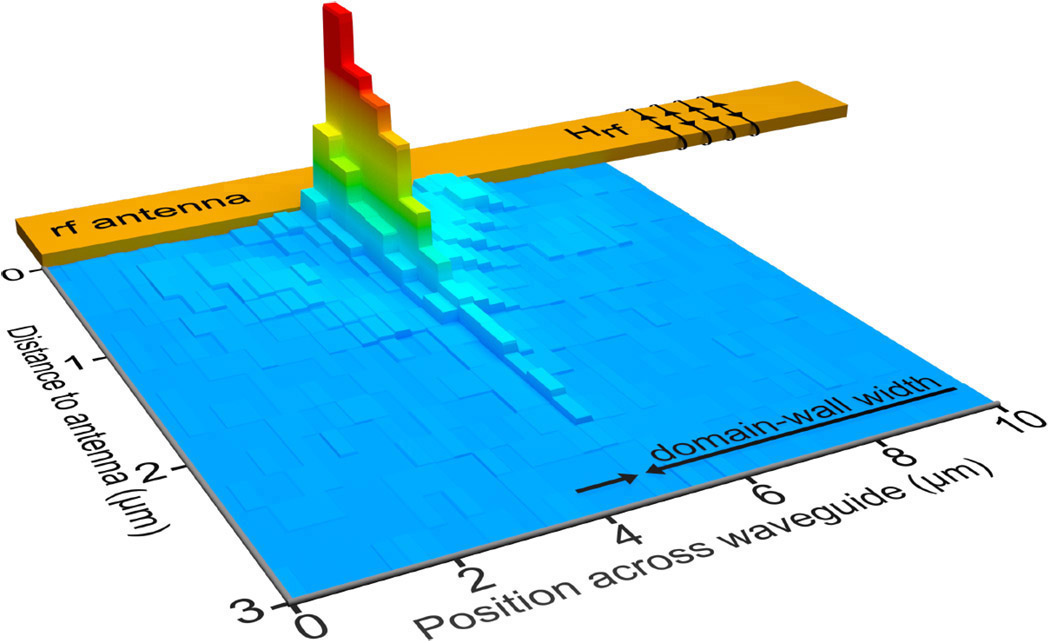 Figure 2. Measured spin-wave intensity, for an excitation frequency of 500MHz. The data shows spin-wave propagation starting from the exciting antenna, but that is also strongly confined to the domain wall in the center of the magnetic carrier structure.4

In addition, to demonstrate the flexibility of our approach, we performed a test in which we controlled the domain wall nanochannel position. To do this, we applied small magnetic fields, and adjusted the polarity and strength of the fields to promote the growth of either the left or right domain, and to hence move the spin-wave channel. The spin-wave intensity that we recorded across our carrier structure, at a distance of 1μm from the antenna, is shown in Figure 3. With this experiment we confirmed that the spin-wave transport was confined even while the domain-wall nanochannel was being moved at the micrometer scale. Figure 3. Spin-wave intensity measured across the magnetic carrier structure, at a distance of 1μm from the exciting antenna. The results demonstrate that small magnetic fields, i.e., on the order of a few Oersted, can push the spin-wave beam in the micrometer range.4

In summary, in the field of magnonics and magnon spintronics, it is necessary to develop energy-efficient and versatile schemes for information transport (i.e., to enable novel computing architectures, with access to wave-based logic concepts). From our experimental results, we confirm that magnetic domain walls can serve as excellent spin-wave nanochannels for future magnonic devices. Indeed, these nanochannels act as reconfigurable, non-volatile, energy-efficient waveguides, and there are multiple possibilities for their manipulation. In our future work, we will investigate the use of novel materials (which have high anisotropies, lower damping, and broken inversion symmetry) that are promising candidates for even smaller nanochannels, while also offering higher integration density and operating frequencies, and remaining non-volatile.

Helmut Schultheiss is head of the magnonics group.

Kai Wagner is currently working as a PhD student in the magnonics group.

Attila Kákay is a postdoctoral researcher at the Institute of Ion Beam Physics. His research is focused on the field of micromagnetics.

Katrin Schultheiss is a postdoctoral researcher working on magnetization dynamics.