Enhanced rates of energetic photons are generated above the thermal emission limit in a hybrid thermal-photoluminescent device, which has an efficiency of about 70 at moderate operating temperatures.
27 March 2017
Assaf Manor, Nimrod Kruger, Tamilarasan Sabapathy and Carmel Rotschild

The efficiency of single-junction photovoltaic (PV) cells is thermodynamically restricted (to about 40% under maximally concentrated sunlight) by the Shockley-Queisser (SQ) limit.1 In turn, the SQ limit is set by the inherent trade-off of broadband energy harvesting, i.e., between heat loss (thermalization) and sub-bandgap photon losses. That is, for a specific PV bandgap, energy is lost because of sub-bandgap photons (to which the PV is transparent) or because of hot electron thermalization after energetic photon absorption. Although concepts such as solar thermophotovoltaics (STPVs) have been developed to deal with the second of these energy-loss mechanisms, this approach requires extremely high operating temperatures to generate high thermal emission fluxes.

In STPVs, the incoming solar spectrum is first harvested by a primary absorber (i.e., which acts as a mediator between the sun and the PV) and then thermally converted and reshaped to spectrally fit the PV bandgap. For this purpose, the absorber must be thermally coupled to a material that emits thermal radiation and that peaks spectrally near the PV bandgap. During this process—see Figure 1(a)—any ‘memory’ of the number of absorbed photons is lost. Furthermore, the emitted radiation is characterized by an enhanced rate (which leads to higher photocurrent). This is possible for thermal radiation because the chemical potential (μ) is zero and no conservation law for the photon rate applies. There is a thermodynamic penalty, however, for operation at μ=0 (i.e., the high temperatures that are required for effective thermal conversion and emission within the desired energy interval). Indeed, after more than 30 years of STPV research, the record conversion efficiency for an STPV device is only 3.2% (at an operating temperature of 1285K).2 Moreover, low-bandgap PVs—such as indium gallium arsenide (InGaAs) or germanium (Ge)—are required for device operation at moderate temperatures (about 1000–1500K). State-of-the-art PVs—such as gallium arsenide (GaAs) or silicon (Si)—however, require extremely high temperatures (well above 2000K). 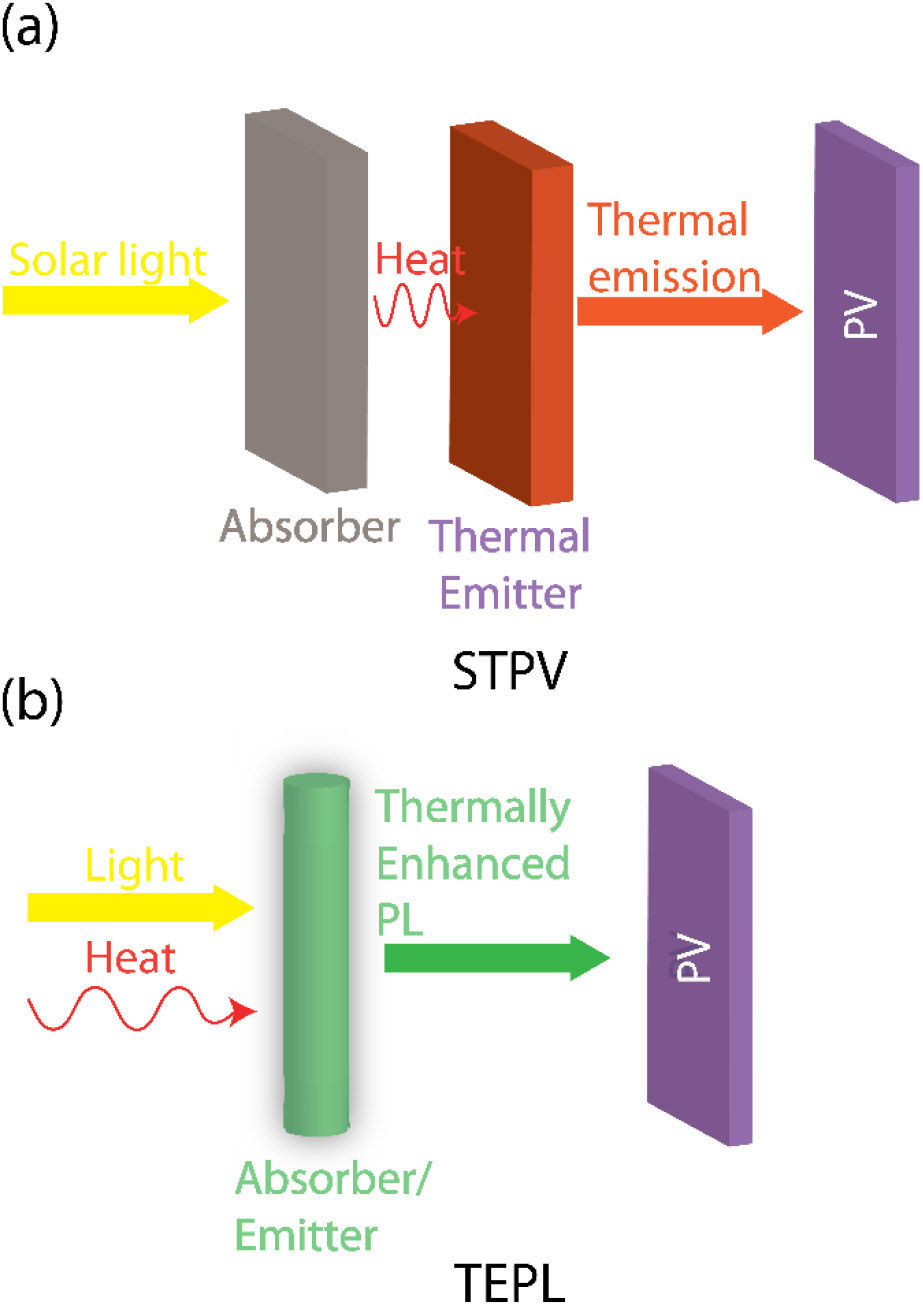 In our work,3 we have recently demonstrated—for low-bandgap cells—that the operating temperature obstacle for PVs can be bypassed by working in the μ>0 regime, where the emitted radiation is photoluminescence (PL). In our approach—see Figure 1(b)—the incoming solar energy is not converted to low-grade heat (as in STPVs), but rather, the emitted PL is related to the absorbed photocurrent (following a rate conservation rule).4 Furthermore, the thermalization heat raises the temperature and causes a blueshift of the constant current. Thermally enhanced PL (TEPL) is thus created and is characterized by the enhanced generation of high-energy photon rates (i.e., orders of magnitude higher than thermal emission at the same temperature). Our methodology therefore enables the use of state-of-the-art GaAs devices to achieve record conversion efficiencies.5

In our experiments we co-pumped a silica:neodymium (SiO2:Nd3+) sample at a constant photon rate, with an additional heat load applied to the system: see Figure 2(a). Our results showed that the TEPL conversion mechanism is indeed characterized by the conservation of photon rate and enhanced generation of high-energy photon emission.4 In particular, we used a 532nm pump that induced PL spectral evolution with increasing temperature. As heat is pumped into the system by the carbon dioxide laser (which is absorbed by the silica matrix), the low-energy photon rate (with a wavelength, λ, of ∼900nm) decreases and the high-energy photon rate simultaneously increases (at λ< 850nm). The total photon rate is thus conserved and a blueshifted spectrum is maintained. This heat-pump effect continues until the onset of thermal emission (at about 1500K), when the spectrum sharply rises (dotted lines) at all wavelengths. The heat-pumping continues—see Figure 2(b)—as long as the system's μ is nonzero, i.e., as long as the sample is excited above thermal equilibrium. The dependence of μ on temperature is closely related to the emitted PL photon rate and the thermal emission rate at equilibrium. The up-conversion ability is therefore manifested by the generation of high-energy photon emission rates, which is orders of magnitude higher than thermal emission: see inset to Figure 2(b).

Figure 2. Results of a TEPL experiment (exp.) on a silica:neodymium (SiO2:Nd+3) sample, in which a carbon dioxide (CO2laser) and a 532nm pump were used to induce PL spectral evolution with increasing temperature. The (a) measured PL spectrum as a function of temperature and (b) the PL chemical potential (μ) temperature (T) dependence are shown. Dotted lines in (a) indicate the onset of thermal emission. The inset to (b) shows a comparison of the energetic photon rate (at wavelengths, λ, of <850nm) for TEPL and thermal emission. A.U.: Arbitrary units.

On the basis of our successful experiments, we have recently proposed a TEPL-based PV converter.6 At the heart of this device—see Figure 3(a)—is a PL material that has an absorption cut-off energy (EAbs). In the converter, the absorption of solar photons excites PL and raises the absorber's temperature (because of the electron thermalization that follows energetic photon absorption). This results in TEPL being emitted toward the optically coupled PV cell (which has a bandgap greater than EAbs). In addition, cold sub-bandgap photons are efficiently recycled by the PV's back-reflector (state-of-the-art GaAs cells that have about 98% reflection for sub-bandgap photons7) back to the hot absorber to yield the thermal up-conversion. For an ideal TEPL absorber/emitter and an SQ-limited PV, we find that our approach can yield an efficiency of up to 70% at the moderate operating temperatures. This high level is possible because of the combination of high photocurrent and high operating voltage, which arise from the absorber's nonzero μ. We have also fabricated a glass-doped broadband absorber as a first step toward realizing a device that can operate at EAbs=1.1eV, coupled to a GaAs PV cell (i.e., with a 1.44eV bandgap). This absorber—see Figure 3(b)—is made from chromium-neodymium-ytterbium-doped (Cr3+Nd3+Yb3+) glass and has a continuous absorption line shape. The TEPL temperature evolution of the absorber that we measured under white-light illumination (in the 300–1000K temperature range) is shown by the colored spectra in Figure 3(a). These spectra indicate a decrease in low-energy photons and an increase of photons with energy above 1.44eV, which matches the GaAS PV bandgap. At 1000K, we observe that about 30% of the PL photons are emitted within the desired high-energy interval.

Following from the measured absorber upconversion ability, we have simulated a TEPL device where the absorber is a doped glass cylinder surrounded by GaAs PVs. We calculated that efficiencies of 41–48% are possible for working temperatures below 1500K. These efficiencies are obtainable, provided that both the absorber's external quantum efficiency (EQE) and the PV photon-recycling efficiency are above 90%. Although this is a challenging requirement, we are optimistic that such a TEPL device can be realized for two reasons. First, it has been shown that rare-earth dopants (e.g., Nd3+ and Yb3+) exhibit ultrahigh EQEs (approaching unity).8, 9 Second, in a similar fashion to the TEPL device, high GaAs PV sub-bandgap reflectivity (much greater than 90%) has recently been demonstrated, and can be used to support sub-bandgap photon recycling for thermal-PV applications.10 By combining these two benchmark achievements, it should thus be possible to achieve ultra-high-efficiency TEPL devices.

In summary, we have demonstrated that it is possible to use the heat created in the photoluminescence process for the generation of TEPL (i.e., which exhibits extremely high energetic-photon rates compared with thermal emission at the same temperature). By coupling such TEPL emission of a broadband solar absorber with a higher bandgap PV, we have calculated that theoretical efficiencies of up to 70% are possible. As a first step toward realizing such a device, we have fabricated a tailored glass absorber that has a high internal TEPL upconversion efficiency. In our future work we will concentrate on the main two challenges to achieving an efficient device. That is, we will aim to improve the absorber EQE to more than 90% and to improve coupling with high-reflectivity state-of-the-art GaAs cells.

Assaf Manor is currently finishing his PhD studies under the supervision of Carmel Rotschild, in Technion's ‘excitonics’ laboratory.