Despite extensive research efforts over the past few decades, detailed information about surface-dynamical processes (e.g., charge-carrier trapping and recombination) is still extremely limited. A better understanding of surface-dynamical processes is therefore urgently needed to address various fundamental problems related to the performance of solar cells (and many other optoelectronic devices). In particular, one of the largest challenges in this field is the need to selectively map the ultrafast dynamics of charge carriers on material surfaces and interfaces. In the past, such selective mapping has been impractical with conventional time-resolved laser techniques (e.g., time-resolved laser spectroscopy and static-electron imaging). This is because these methods are limited by the laser's relatively large penetration depth. As a consequence, these techniques can only be used to record bulk information. Although many advances have been made in both the electron microscopy and laser spectroscopy communities to achieve very high spatial and temporal resolutions, it is still extremely difficult to obtain both simultaneously (i.e., in one experiment).

In our work,10 we have therefore developed a second-generation 4D-UEM approach in which scanning electron microscopy is implemented. In this adapted technique—scanning ultrafast electron microscopy (S-UEM)—we continue to use the ‘photon pump-photoelectron probe’ scheme that was developed for TEM-based 4D-UEM, but we rely on the detection of secondary electrons (SEs). The SEs are emitted only from the first few nanometers of the material surface and we can thus record time-resolved SE images (snapshots) of the surfaces, with nanometer-scale (spatial) and sub-picosecond (temporal) resolutions. We illustrate the scheme for the S-UEM method in Figure 1. In this case, the material surface is excited by a clocking optical pulse and the changes are imaged with a pulsed electron probe. The SEs are thus emitted from the surface of the photoactive material in a manner that is extremely sensitive to the local electron/hole density. In this way, we can obtain direct (and controllable) dynamical information about the localization of electrons and holes near the interfaces and heterojunctions. 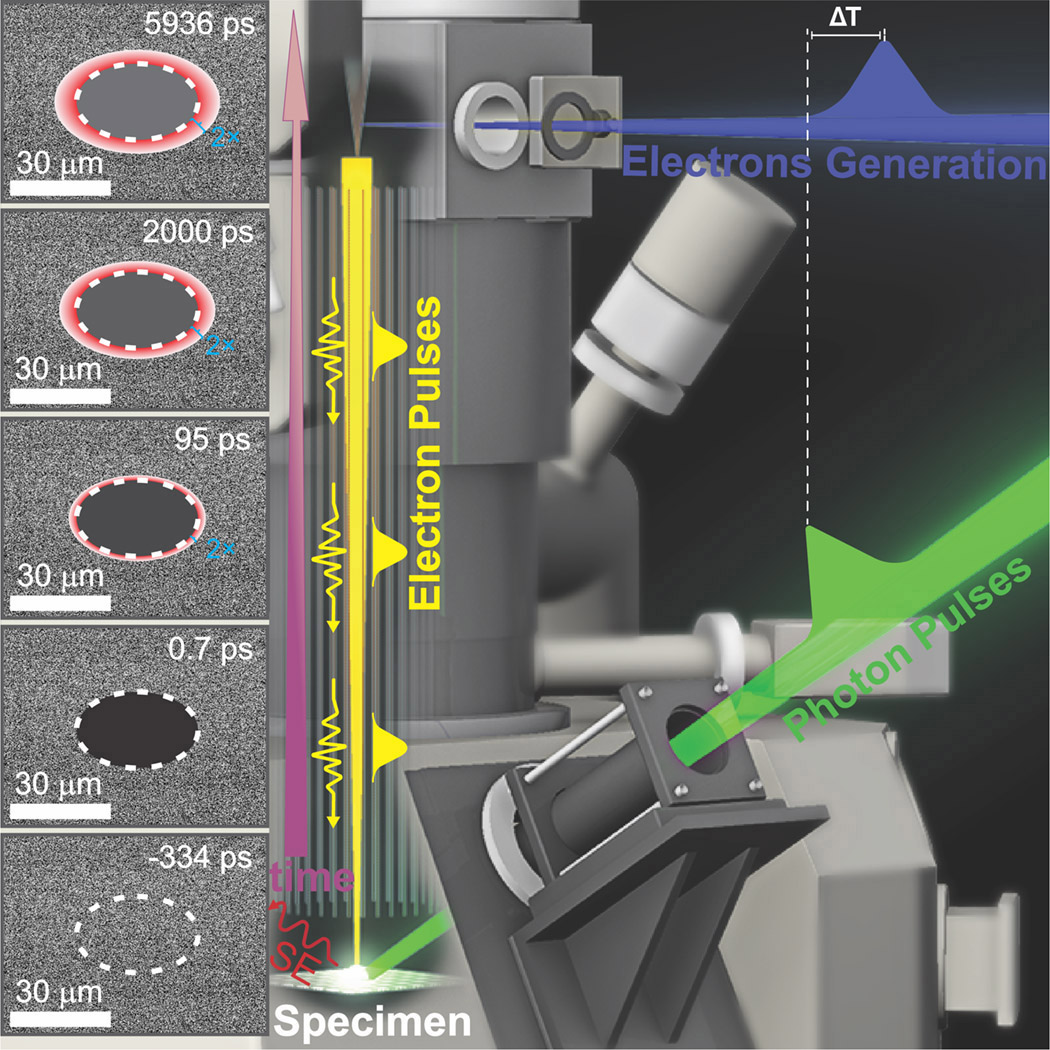 To date, we have used our S-UEM technique in several studies. For example, we have obtained time-resolved snapshots (in space and time) for single crystals of cadmium selenide (CdSe) as well as films of its powder. Our images clearly show how the morphological steps, surface defects, grains, and nanostructured features on the material surfaces can control the overall charge-carrier recombination dynamics.11, 12

In another application of our approach, we have examined the charge-carrier dynamics on the surface of indium gallium nitride (InGaN) nanowires.13 For instance, we demonstrated that it is possible to visualize the energy-loss dynamics and carrier spreading on the surface of the nanowires in real space (see Figure 1). Moreover, we identified the possible deactivation channels and the mechanism of SE energy loss in the system. In particular, we were able to model the variation in the SE signal (in time and space) to extract fundamental material parameters that describe the carrier relaxation and diffusion processes in the nanomaterials. We also selectively mapped the carrier recombination on the surface of these nanowires, before and after surface passivation with octadecylthiol. Our SE snapshots illustrate that the carrier recombination on the surface of the nanowires is significantly slowed down after the surface treatment. This provides us with clear evidence that the surface defects were minimized upon passivation. In addition, this provides an explanation for the superior performance of optoelectronic devices (made from InGaN nanowires) after surface passivation.14

In separate work,15 we used our S-UEM technique to make a major breakthrough in mapping of charge-carrier dynamics on the surface of quaternary copper indium gallium selenide (CuInGaSe) nanocrystals, which are commonly used in solar and optoelectronic devices. Our time-resolved images show how surface treatment with high-band-gap materials (i.e., zinc sulfide) can strongly control the overall carrier relaxation process on the surfaces of these semiconductor materials. These snapshots reveal that the carrier dynamics are slowed down by a factor of two, which means that the density of the trap states is significantly reduced after surface treatment with the inorganic layer of zinc sulfide.

In summary, we have developed a second-generation adaptation of 4D-UEM that incorporates a scanning electron microscope. With our technique we can obtain time-resolved SE images (snapshots) of photoactive material surfaces and interfaces to investigate their charge-carrier dynamics with unprecedented spatial and temporal resolutions. So far, we have used our S-UEM approach in a number of studies, e.g., to examine CdSe crystals, InGaN nanowires, and CuInGaSe nanocrystals. Our results indicate the importance of surface treatments for controlling charge-carrier dynamics. We are now planning to image—in real space and time—the surface and interfaces of a wide range of systems that are relevant to emerging photovoltaic technologies (e.g., metal chalcogenide and hybrid inorganic-organic lead halide perovskite solar cells). This work will provide us with a profound understanding of the microscopic mechanism of charge transfer and separation. The results may also allow us to minimize carrier trapping at the interface, and to thus optimize the performances of the devices.

Omar Mohammed is an assistant professor in the Division of Physical Sciences and Engineering, as well as the principal investigator of the Ultrafast Laser Spectroscopy and Four-dimensional Electron Imaging Laboratory. His research is focused on the development of highly efficient solar cells, with the aid of cutting-edge laser spectroscopy techniques.