In volumetric displays, 3D images are rendered directly onto a physical volumetric space.1–3 These images can then be viewed by observers without the need for any additional devices. The application space for displays such as these includes 3D visualization for medical applications, human-computer interactions, architectural design, entertainment, and advertising. Indeed, some applications based on unique 3D volumetric-display architectures have already been proposed.4, 5

Controlling volume elements (voxels) that are arranged in a 3D layout in the same manner by which pixels are controlled in conventional 2D displays presents a challenge, however. For example, the use of LEDs as voxels6 necessitates the presence of electrical wiring, which deteriorates the spatial resolution and induces occlusion in the displayed images. There exist a number of approaches to developing optically controlled volumetric displays that are capable of rendering 3D images without the need for wiring.7–12 Most of these approaches involve focusing a high-power laser beam at an arbitrary point in the volume, thereby inducing visible physical phenomena (e.g., plasma emission or photoluminescence) to produce numerous areas of light that together form a 3D image. In such approaches, three primary-color fluorescent materials (i.e., red, green, and blue) are placed at different positions relative to one another to achieve a full-color image. As such, these display devices require complicated structures (e.g., a stack of multiple thin layers).

We have developed a novel addressing approach using photochromic materials (PMs) to achieve a full-color volumetric display with a simple structure.13 Our system is based on the use of PMs (diarylethenes14, 15) that are initially transparent, due to their molecular structure (i.e., an open-ring isomer). By irradiating the molecule with UV light, the change to the molecular structure (i.e., ring closure) alters its absorption characteristics, thereby introducing color. The PMs can be returned to their initial transparent state (i.e., decoloration) by subsequent irradiation with visible light (Vis) of the appropriate wavelength.

The concept of our full-color volumetric display based on PMs is illustrated in Figure 1(a). The volume space in which the 3D images are rendered comprises a mixture of multiple PMs that assume different colors (cyan, magenta, and yellow) upon irradiation with UV light. The system is arranged such that two control lights irradiate the PM volume from different angles. By controlling the UV-irradiation pattern that is incident on the material, the position-selective coloration of the PMs can be induced at any depth (Z). Furthermore, color selectivity is based on the spectrum-dependent decoloration via Vis. Cyan, magenta, and yellow PMs with ideal absorption spectra are decolored by red, green, and blue Vis irradiation, respectively. Controlling the Vis-irradiation pattern therefore enables color-selective coloration, as shown in Figures 1(b) and (c). 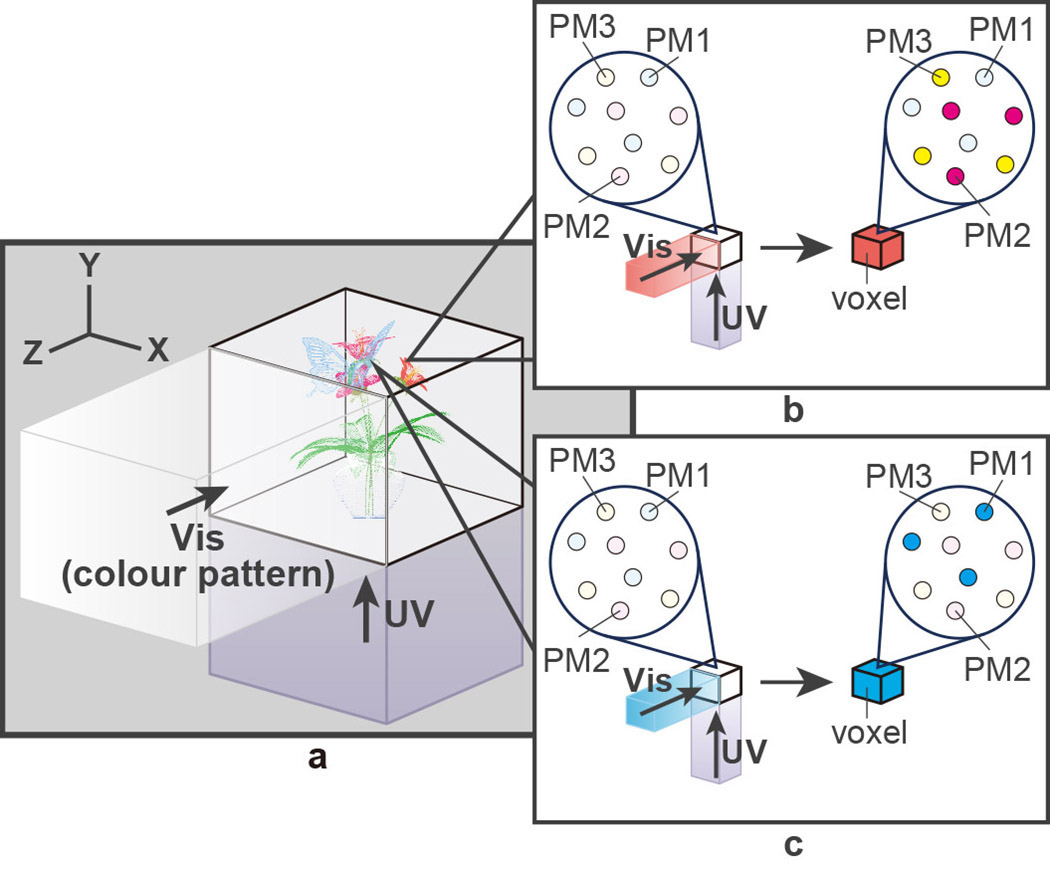 Figure 1. The concept of our volumetric display, based on a mixture of multicolor photochromic materials (PMs). (a) Scheme of our proposed volumetric display, in which voxel color transformation occurs when visible light (Vis) is (b) red and (c) cyan. PM1, PM2, PM3: PMs that were initially cyan, magenta, and yellow, respectively.

We demonstrated the positional selectivity of our approach by using a single-color (red) PM. We homogeneously mixed the PM with a clear polymer resin to ensure uniform distribution throughout, and placed a UV source beneath the resulting transparent-block PM volume to achieve uniform irradiation: see Figure 2(a). A projector, located to the left of the PM volume, acts as the Vis light source, and arbitrary 2D patterns are introduced via UV irradiation of the volume. Figure 2(b) shows how the color changes that occur within the PM volume depend on the selective illumination from the UV and Vis lights. These results confirm the successful realization of our position-selective color-transformation principle. Furthermore, PM coloration can be induced at arbitrary depths via the geometrical optical intersection of the UV and Vis lights. 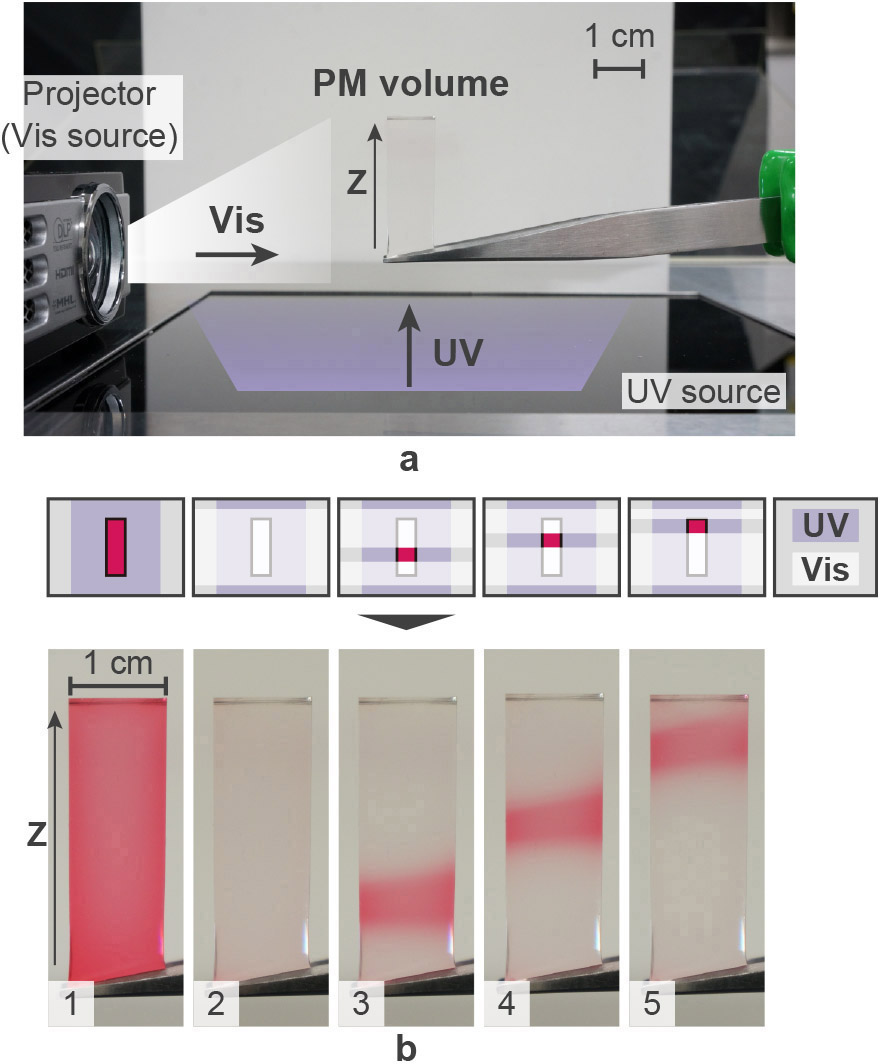 Figure 2. Fundamental experiment using a PM of one color (i.e., red). (a) Experimental setup. The light from the projector (i.e., the Vis source) and the UV light intersect at a 90°angle within the PM volume. (b) Color changes occur to the PM as a result of patterned UV/Vis irradiation. Irradiation by Vis leaves the PM colorless, whereas areas irradiated by UV are red. Z: Depth direction. 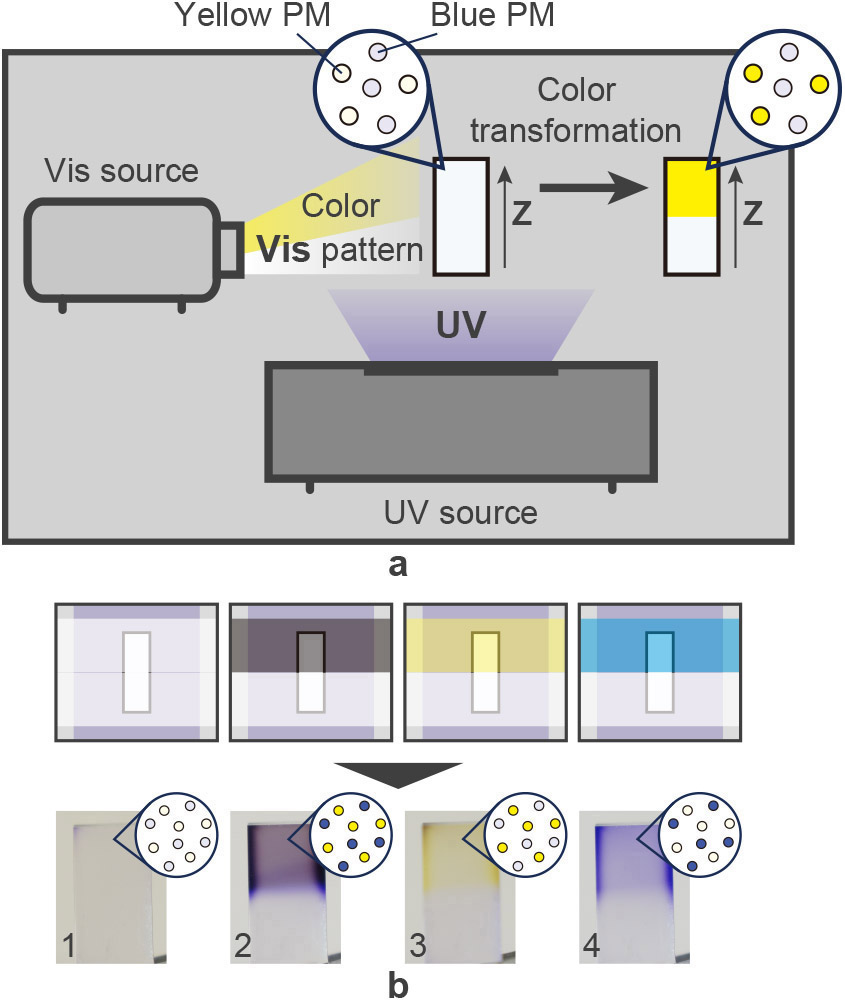 Figure 3. Experimental demonstration of color-selective coloration of a multicolor PM mixture. (a) Experimental setup. (b) Color change in the PM volume (bottom) after irradiation by UV or Vis in the illustrated manner (top).

We have proposed our own volumetric display system (see Figure 4) based on the principles of PM that we have outlined. In our device, irradiation by UV and Vis is synchronously controlled by two space-light modulators (SLMs). SLM1 (UV) sweeps a 2D image that is rendered by SLM2 (Vis) along the depth direction (i.e., the Z axis). Voxels that are irradiated by white light, or are not irradiated by UV light, are colorless. The color of the other voxels is determined by the intensity ratio of the three primary colors in the Vis. If the time taken to scan through the thickness of the volume is less than the time resolution of the human eye, observers will recognize the sequential 2D patterns as a 3D image.

Figure 4. Volumetric display system based on the position- and color-selective color transformation method for PMs.

In summary, we have proposed and demonstrated a system for the position- and color-selective coloration of PMs in a solid mixture of multiple PM types using two control lights (UV and Vis).13 By modulating these lights, we can achieve a dynamic, full-color volumetric display with an extremely simple volume structure. This novel approach to volumetric display design shows promise for application in a number of fields, including information displays and human-computer interfaces. Our research also demonstrates novel applications for PM materials in the fields of chemistry and materials science. In our future work, we plan to construct a full-color volumetric-display system based on the principles that we have proposed here. In addition, we will evaluate our system in terms of, e.g., spatial resolution, frame rate, and color representation.

This work was partially supported by two Japan Society for the Promotion of Science Grants-in-Aid for Scientific Research (16J30007 and 25240015).

Ryuji Hirayama is a PhD candidate at Chiba University, and a research fellow of the Japan Society for the Promotion of Science. His research interests include 3D displays (particularly volumetric displays) and their applications.

Atsushi Shiraki serves as an associate professor at the Institute of Management and Information Technologies, where his research interests focus on 3D displays and their applications. He is also engaged in educational technology.

Takashi Kakue is an assistant professor, and received his PhD from the Kyoto Institute of Technology, Japan, in 2012. His research interests include holography, digital holography, computer holography, holographic interferometry, 3D displays, highspeed imaging, and ultrafast optics.

Tomoyoshi Shimobaba received his PhD in 2002 and now serves as an associate professor. His research interests include computer holography and its applications.

Tomoyoshi Ito, a professor, received his PhD from the University of Tokyo, Japan, in 1994. His research interests include high-performance computing and its applications, including electronic holography for 3D TV.