Enhancing the spatial resolution of far-field optical imaging without photobleaching

Super-resolution imaging methods have recently attracted an extensive amount of interest because of their unprecedented benefits for optical nanoscopy and single-molecule detection (e.g., acknowledged through the award of the 2014 Nobel Prize in Chemistry).1–3 At present, the main approaches for achieving far-field super-resolution are based on saturation/switching of fluorescence, but these methods suffer from photobleaching.1–4 It is thus desirable to find a robust contrast agent that is unaffected by bleaching.

Other than fluorescence, the most common contrast agents used in the field of microscopy are absorption (e.g., bright-field imaging) and scattering (e.g., dark-field imaging), both of which are free from bleaching. To achieve resolution enhancements, however, a nonlinear response (such as saturation and switching of contrast) is necessary. It is well-known that absorption is saturable, and this has recently been applied to achieve a sub-diffraction-limit resolution with non-fluorescent materials.5 The nonlinear response of scattering, however, is much less studied.

In our recent work we have therefore investigated novel nonlinear scattering from a single metal nanoparticle, and have demonstrated the feasibility of resolution enhancement based on nonlinear plasmonic scattering. Our first discovery was that scattering from a single plasmonic nanoparticle is saturable,6 i.e., when it is excited by a laser that has a wavelength located within the surface plasmon resonance band. This saturation behavior is clearly evident from the scattering point spread function (PSF) of a nanoparticle (see Figure 1).6 At low excitation intensity, the PSF has a Gaussian distribution and follows the laser excitation profile. At higher intensities, however, we observe flat-top profiles. The shape of these profiles indicates that the scattering saturation occurs from the center of the PSF, while the periphery of the PSF remains linear. A more in-depth discussion of the correlation between nonlinear scattering and the PSF variation is provided elsewhere.7 From the results shown in Figure 1, it is also obvious that by spatially extracting only the nonlinear contribution, we can enhance the effective resolution. This is similar to the underlying concept of nonlinear structured illumination microscopy8 and saturated excitation (SAX) microscopy.9 We have thus successfully implemented plasmonic SAX by incorporating temporal modulation to our excitation source, and have used the detection of modulation harmonics in the scattering signals to extract the nonlinear contribution. 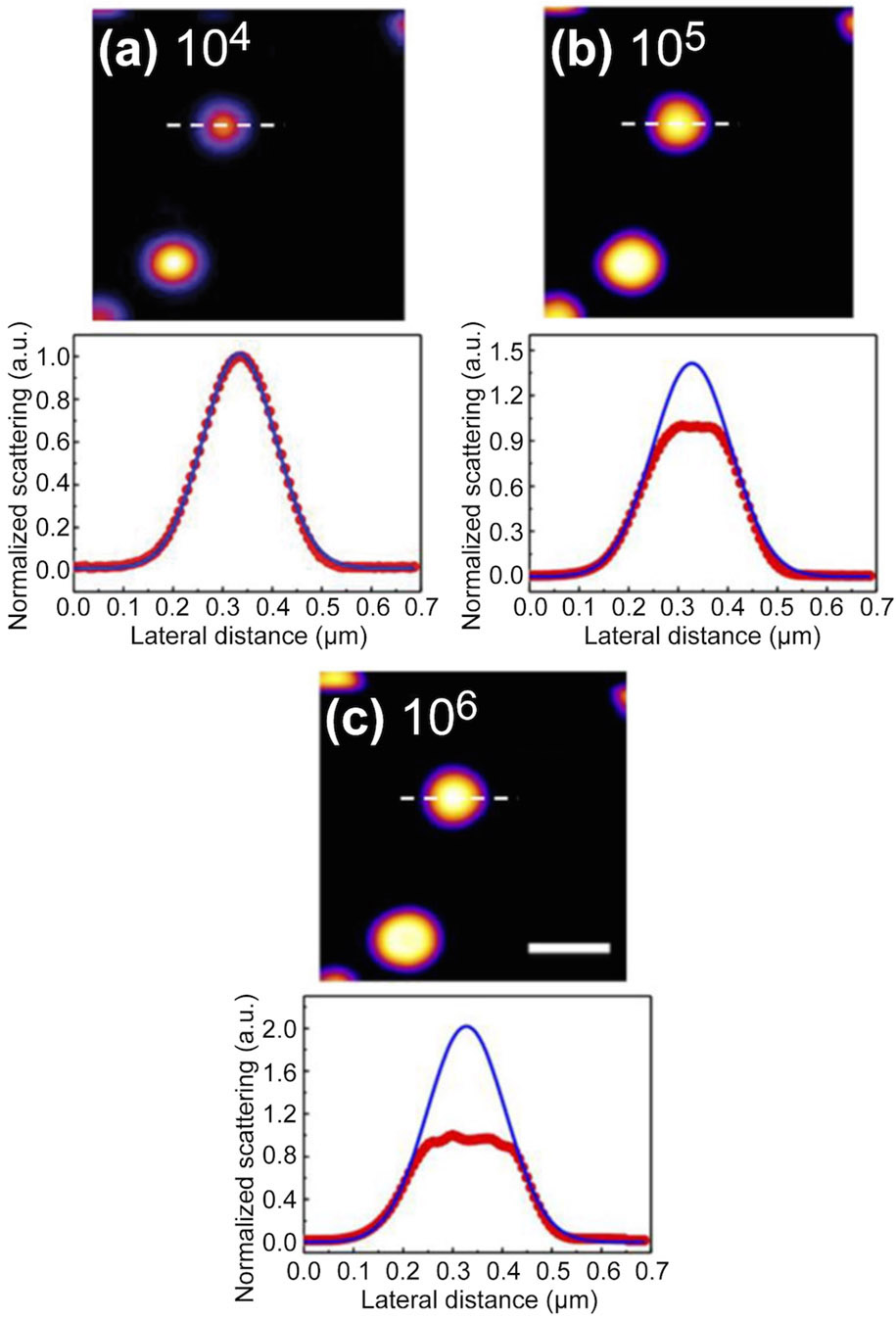 Figure 1. Top panels: Representative point spread function (PSF) of 80nm gold nanospheres when they are imaged with the use of a 532nm laser that has an intensity of (a) 104W/cm2, (b) 105W/cm2, and (c) 106W/cm2. This series depicts the evolution of the scattering image from an unsaturated to a saturated PSF. White solid line in (c) indicates the scale (500nm) for all three images. Bottom panels: Line profiles of the corresponding PSFs, along the white dashed lines (in top images), which illustrate obvious saturation behavior. a.u.: Arbitrary units.

We demonstrate the resolution enhancement of our approach with 1fm, 2fm, and 3fm scattering signals (where fm is the fundamental modulation frequency) in Figure 2. White arrows in the confocal scattering images indicate two closely packed gold nanoparticles that cannot be resolved with the 1fm signal—Figure 2(a)—but that can be clearly distinguished with the higher harmonic components, as shown in Figure 2(b) and (c).6 The PSF line profiles of these same two particles at the 1fm, 2fm, and 3fm harmonics—Figure 2(d–f)—show the quantitative reduction of the full width at half-maximum (FWHM) to λ/8 (where λ is the laser wavelength), which is much smaller than the diffraction limit.6 With this technique we can also achieve a sub-70nm FWHM with the 3fm signal and have thus demonstrated far-field super-resolution imaging based on scattering for the first time. A full description of our experimental procedure for this plasmonic SAX technique has recently been published.10 Our experimental results also indicate that nonlinear scattering arises when the excitation laser wavelength overlaps with the plasmonic band of the nanoparticles. For gold nanospheres with diameters of 40–100nm, this overlap occurs in the 500–600nm range. In addition, our demonstration of nonlinear scattering over a broad range of wavelengths—from blue-violet to near-IR, with silver nanospheres and gold nanorods, respectively11—significantly expands the wavelength choice for plasmonic SAX microscopy. 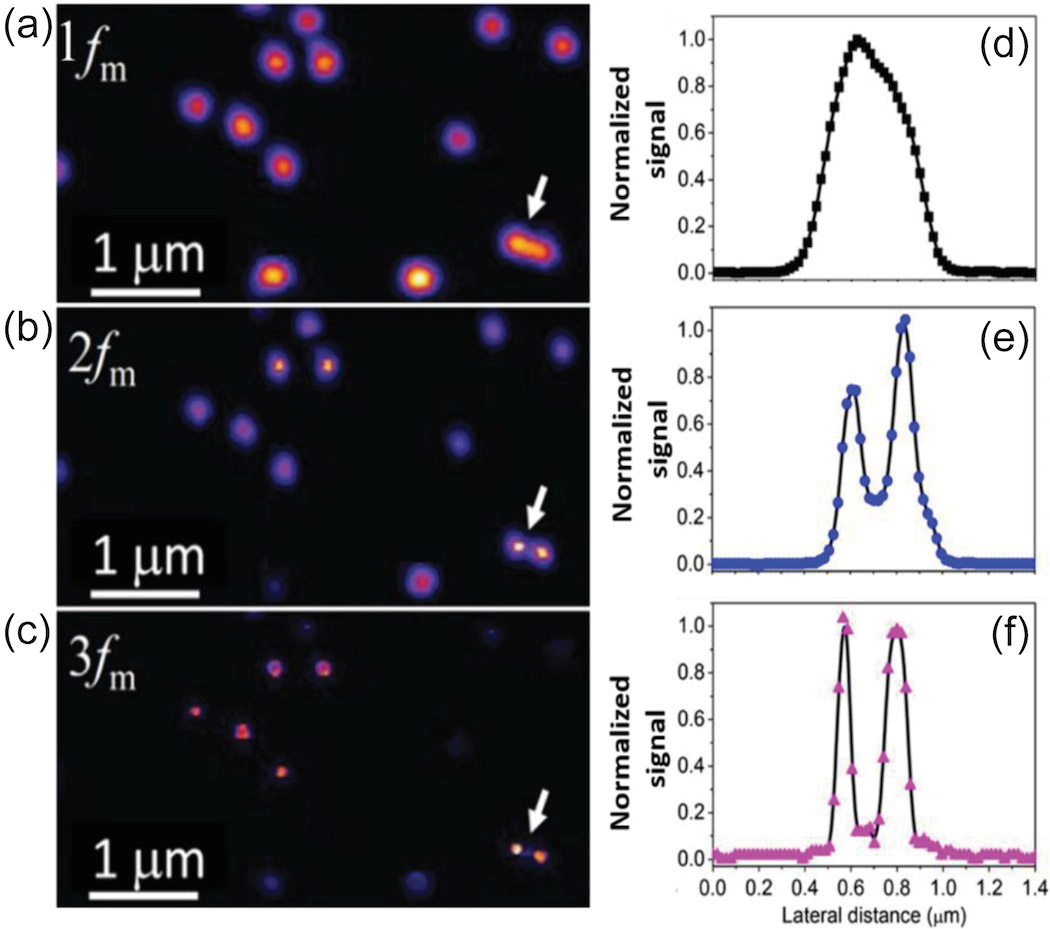 Figure 2. Illustration of scattering saturation and resolution enhancement in gold nanospheres. Left: Confocal scattering images at (a) 1fm, (b) 2fm, and (c) 3fm modulation harmonics (where fm is the fundamental modulation frequency). Right: Line profiles of the two particles marked by the white arrows in (a–c), illustrating the resolution enhancement at higher harmonics.

Once saturation is achieved in our technique, the scattering intensity should no longer increase even when the excitation intensity increases (as illustrated in Figure 1). The capability of all-optical switching is a natural corollary of this effect, i.e., strong illumination can effectively suppress the scattering cross section across the whole plasmonic resonance band of a single nanoparticle. All-optical switching through plasmonic scattering is advantageous for many reasons (e.g., small size, high speed, large switching modulation depth, low power requirement, and broadband operation).12

The suppression of 543nm light scattering from a single gold nanosphere upon increasing the 592nm excitation intensity (which requires 6 × 104W/cm2 to saturate the scattering cross section) is illustrated in Figure 3(a). In addition, we depict the reversible switching and photostability capabilities in Figure 3(b). The modulation depth of this ultrasmall switch reaches at least 80%, and it thus shows great potential for high-speed signal processing (i.e., bridging the electronic regime to photonics). A novel application of our plasmonic all-optical switching method is to enhance the spatial resolution through suppression of scattering imaging (SUSI) microscopy,12 as demonstrated in Figure 3(c). Inspired by stimulated-emission depletion microscopy,1 we spatially overlapped a donut-shaped 592nm beam with a 543nm solid beam. When the 592nm laser intensity was sufficient to suppress 543nm scattering, we observed a significant improvement in the imaging spatial resolution. 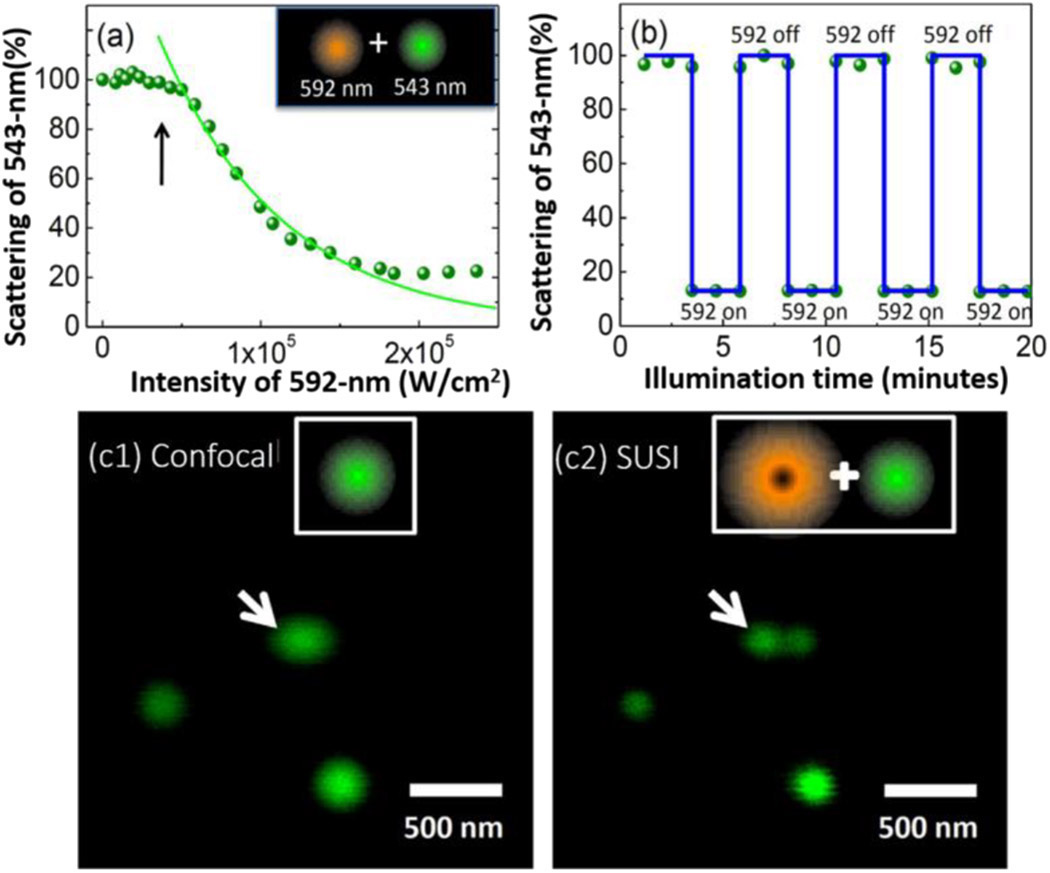 In summary, we have demonstrated saturable scattering in isolated plasmonic nanostructures. By extracting the saturated part of the PSFs of these nanostructures, we have achieved spatial resolution beyond the diffraction limit for SAX microscopy. We have also used a single nanoparticle to realize a reversible all-optical switching capability and to thus enhance the resolution with the use of SUSI. As we recently discussed,13 the use of plasmonic nanoparticles for the enhancement of optical nonlinear processes in biological imaging is far-reaching, so we are now planning to explore the biological applications of our plasmonic SAX and SUSI techniques. This work will provide a unique platform for high-resolution, high-speed, and long-term imaging endeavors.

Gitanjal Deka received his PhD in biophotonics from National Yang Ming University, Taiwan, and is currently a postdoctoral researcher. His research interests are fluorescence lifetime imaging and other nonlinear optical microscopy techniques.

Shi-Wei Chu is an expert in the fields of optical microscopy, optical spectroscopy, laser physics, and biomedical applications. He is currently a professor in the Department of Physics. He has published more than 50 peer-reviewed articles and has filed eight patents.