Studying the water quality of large lakes is a challenging task. For instance, collecting water samples is time-consuming and insufficient for studying the microproperties of water for a whole lake. In recent years, airborne and spaceborne remote sensing techniques have been developed to overcome this issue. From high altitudes, spectrometers can thus be used to capture information (relevant to the study of bodies of water) over large areas. Indeed, it is now known that several factors related to water quality (e.g., the presence of phytoplankton or the concentration of colored dissolved organic matter) can be assessed from the spectral reflectance (i.e., the amount of radiation reflected) of the water.1, 2

In a joint effort to study both Lake Geneva (Switzerland) and Lake Baikal (Russia), several Swiss and Russian institutions have founded the so-called Leman-Baikal project. As part of this work, between 2013 and 2015, scientists collected water samples, in situ hyperspectral data (using a WISP-3 instrument from Water Insight and a RAMSES radiometer from TriOS), and airborne hyperspectral data (using a Headwall Photonics Micro-Hyperspec visible/near-IR sensor) to perform a large-scale water-quality assessment of both lakes (see Figure 1).3 A calibration procedure, however, is still needed so that data from the pushbroom airborne sensor can be made to match the ground (i.e., in situ) spectra. Only then will the airborne data be suitable for large-scale analyses. Methods that have been developed so far for this purpose, however, rely on additional onboard equipment,4 or they require the use of concurrent ground measurements. 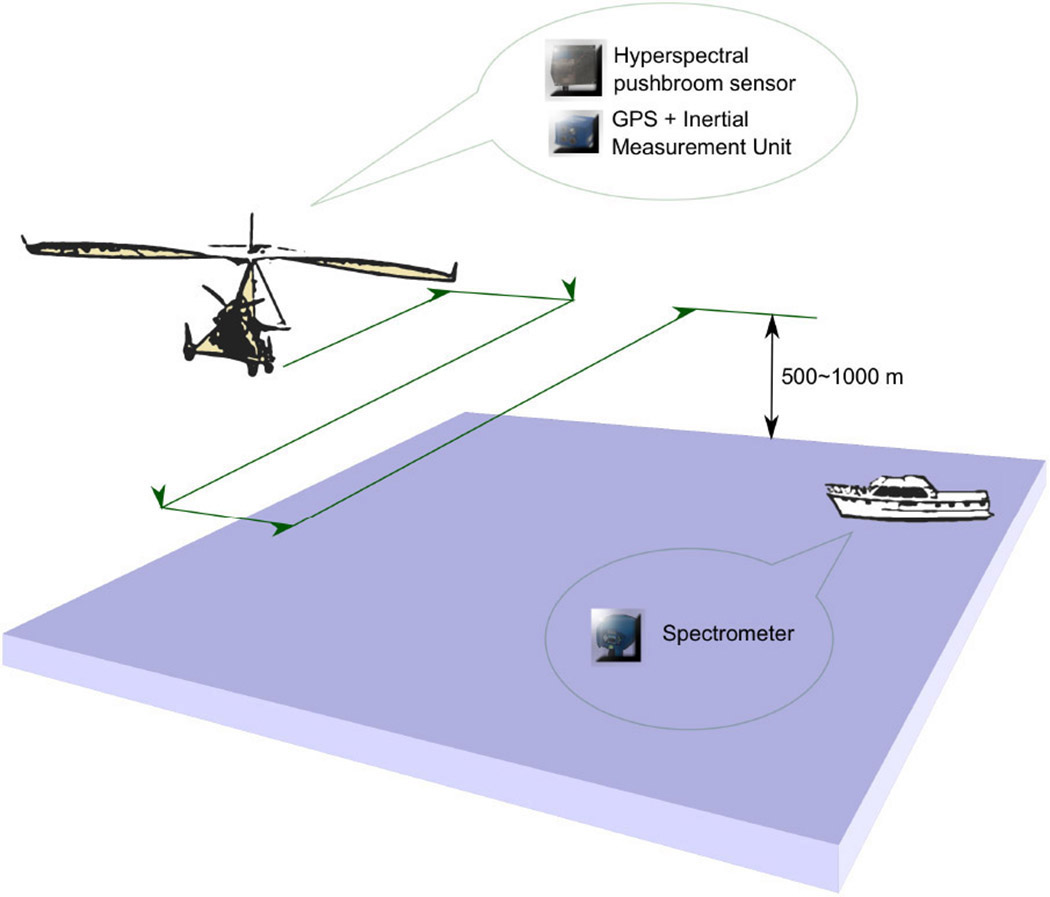 Figure 1. Schematic illustration of the Leman-Baikal project acquisition campaign. At a given time, an ultralight trike—equipped with a hyperspectral pushbroom sensor—flies over a point of interest. In situ data is simultaneously acquired (from a spectrometer on a boat) for the same point of interest. GPS: Global positioning system.

We therefore propose a new, fully unsupervised calibration procedure for the retrieval of water-leaving reflectances from an airborne hyperspectral pushbroom camera.5 We have specifically designed this procedure so that we can deal with all the inherent (i.e., noise and spectral smile) and external (e.g., contributions from the Sun, sky, and atmosphere) sources of error. We can thus transform the output of the sensor into digital information and subsequently into a unit-less measure of remotely sensed reflectance. In particular, we propose new methods to correct the spectral shifts induced by smile—a phenomenon that arises with pushbroom hyperspectral sensors because the projection of the radiation from the dispersive element onto the CCD array is distorted (in the shape of a smile) and thus causes spectra collected in pixels from the same scan line to be misaligned with respect to wavelength—or by moving dispersive elements inside the sensor, and to scale data to reflectance.

To perform our spectral calibration, we rely on the presence of the dioxygen absorption peak (around 760nm) in our measurements. In our approach, we compute a signal—which represents the fast variations (‘high frequencies’) within the spectrum—for each of two spectra that we wish to align (i.e., with respect to their wavelengths). We obtain this signal by dividing the original spectrum by a smoothed version of it. The high frequencies signals therefore highlight absorption peaks, especially the atmospheric absorption peak: see Figure 2(a). We then use an elastic matching algorithm (dynamic time warping) to establish a band-to-band correspondence between the two high frequencies signals. This correspondence can then be used to warp one signal (align it bandwise) with the other signal. An example result is shown in Figure 2(b). 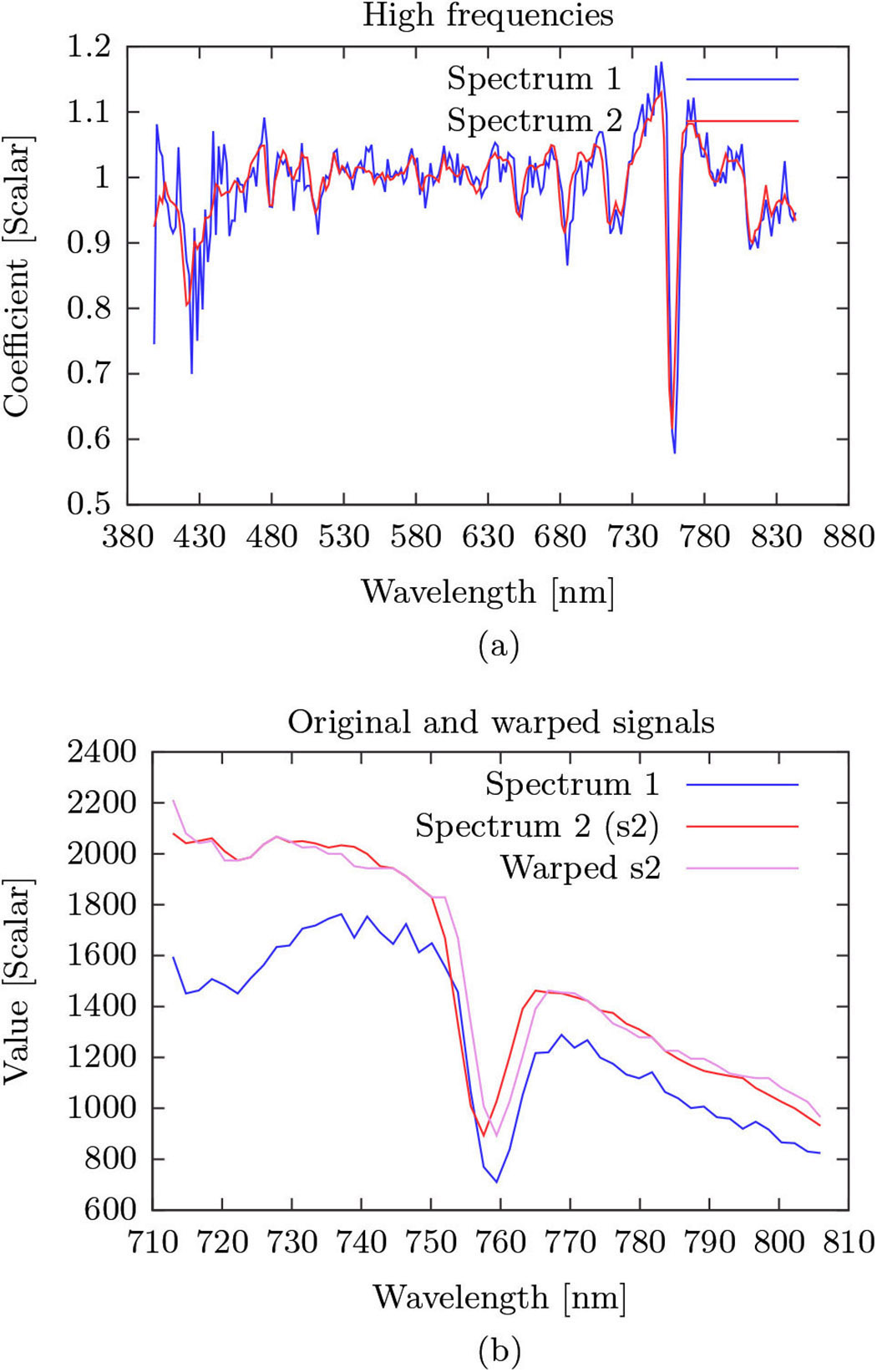 Figure 2. Illustration of the spectral-shift removal process. (a) Signals of the high frequencies (fast variations) in the spectra are obtained by dividing the original signals by their smoothed versions. The high frequencies of the two spectra, however, are misaligned. (b) Dynamic time warping (an elastic matching algorithm) is then used to align the spectra. In this example, the band-to-band correspondence is used to stretch spectrum 2 into new warped spectrum with peaks that are aligned with those of spectrum 1.

Once the data has been filtered to remove noise and smile, we process it further to mitigate the effects of surface-reflected glint and to scale it to reflectance. The water-leaving radiance is supposed to be negligible in the near-IR (NIR). We therefore compute the correlations between the data from different bands for a deep-water area,6 to reduce the impact of glint. We then measure an area of vegetation on the shore and assume that its NIR reflectance is close to 50%. Although the NIR reflectance of plants can vary substantially, our assumption is a reasonable approximation of the real reflectance for a heterogeneous area of healthy vegetation. By using a Spectralon (a unit-reflectance panel that exhibits Lambertian behavior), we can estimate the band-to-NIR transmittance ratio for each band of our camera. All the transmittances can then be computed by simply scaling the NIR digital number, collected with the Spectralon, to 50% reflectance. If this scaling factor is inappropriate, we can determine a better factor from a different ground measurement. At this point in our technique the method becomes supervised.

To assess the performance of our calibration process, we computed spectra for four sample points near the mouth of the Rhône river in Lake Geneva and for four points in the Selenga Delta of Lake Baikal. We obtained these measurements from low altitudes (≤700m), which means that they are relatively unaffected by atmospheric scattering. We also compared this data with in situ spectra that we collected using the WISP-3 and RAMSES instruments. Both our calibrated airborne data and our in situ data are plotted in Figure 3 for one of the Lake Geneva sites. We find a good similarity between the calibrated and in situ data for all eight test points, with an average correlation of 0.976. 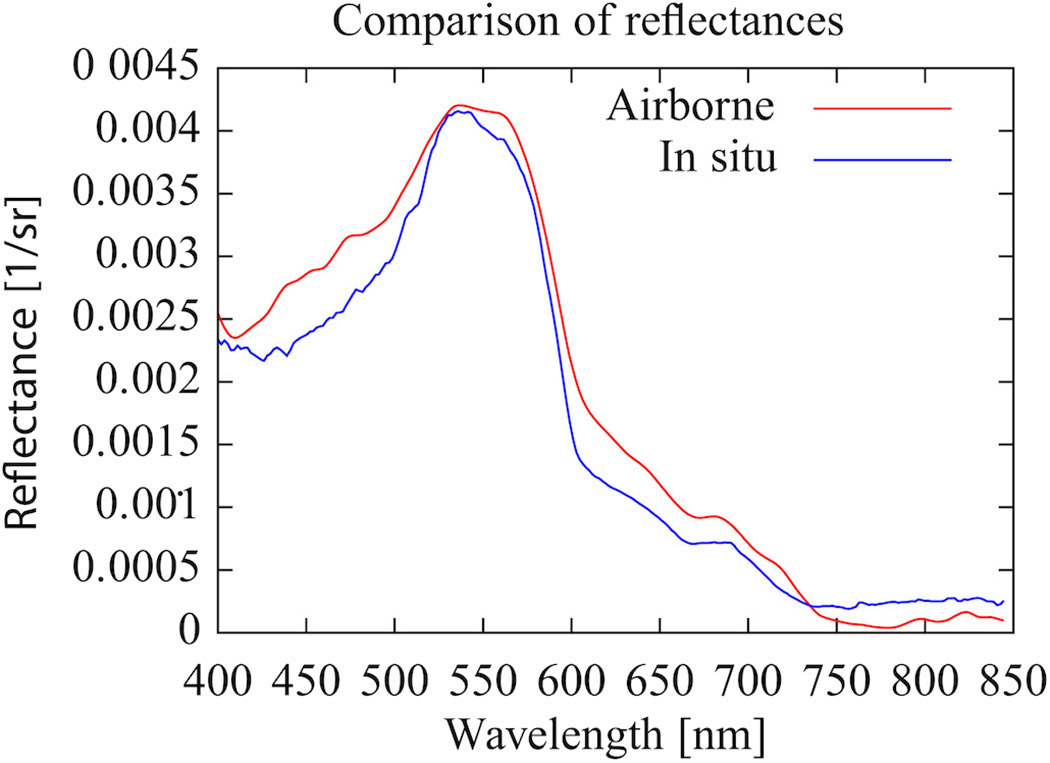 Figure 3. Comparison of a calibrated airborne spectrum and an in situ spectrum for a location in Lake Geneva (46.40860°latitude, 6.84326° longitude). sr: Steradian.

In summary, we have designed a self-calibration algorithm, to transform sensor digital numbers to reflectance information, for an airborne pushbroom hyperspectral camera. With our algorithm we efficiently mitigate the effects of noise, spectral smile, as well as external parameters such as glint and atmospheric scattering. Our calibrated water-leaving reflectance outputs show good similarity to simultaneously obtained ground measurements.5 In our ongoing work, we plan to focus on finding an efficient, image-based atmospheric correction algorithm to calibrate spectra obtained from higher-altitude flights.

The Fondation pour l'Étude des Eaux du Léman, Ferring Pharmaceuticals, the Consulat Honoraire de la Fédération de Russie in Lausanne, the Dr Paulsen Foundation, and the Lake Baikal Protection Fund are acknowledged for their financial support. The Baikal Institute of Nature Management are also thanked for their scientific and logistical contribution to the acquisitions campaigns over Lake Baikal. Special thanks are given to F. Bernard, J. Couttet, A. Barisevsky, V. Vikharev, and N. Belyaev, the ultralight trike pilots.

Kévin Barbieux is currently a PhD candidate in computer sciences. In the context of the Leman-Baikal project, he works on geometric and radiometric processing of airborne hyperspectral data.