Resonant optical cavities are used for recording and readout purposes, and easily increase data transfer rates by at least a factor of two.
21 October 2016
Bo E. Miller and Yuzuru Takashima

During the development of CDs, DVDs, and Blu-rays for consumer storage applications, a large amount of research was conducted on high-density optical data storage (ODS) methods. Resolution limits on data capacity, and a market shift from local storage to remote cloud storage, however, have led to a decline in ODS development. Most data stored on clouds is accessed infrequently (known as ‘cold data’).1 Solid-state and hard-disk drives are impractical storage solutions for such data because of their high-power consumption and short archive lives. To address this issue, Panasonic has used Blu-rays to develop a new, low-cost, long-lived storage option known as ‘freeze-ray,’2 and their work has served as a precedent for the resurgence of ODS development for cold data. While SONY and Panasonic were working on their next-generation, 3D, cold data system—known as the Archival Disc (AD)3—researchers around the world circumvented the resolution limits of prior 3D storage methods by adding degrees of freedom (DOFs). Indeed, 5D (i.e., five-dimensional, or ‘eternal’) data storage, which should last for more than 1020 years, has been demonstrated by using fused silica as a recording material.4 In addition, micro and volume holographic data storage (HDS) methods—with densities as high as 2.4Tb/inch2 (and which continue to grow)—have been developed.5 Although volume HDS in particular has the promise to meet/beat the AD in terms of cost, capacity, speed, and archive life (making it a prime candidate for the next generation of cold data storage options),1, 3 its current techniques are extremely energy inefficient, i.e., 99.7% of its source light is lost during data transfer.6, 7

To address the problem of energy loss in volume HDS systems, the Japanese Broadcasting Corporation have developed a technique in which the—otherwise unused—light is re-used to read two sets of data (with two orthogonally polarized beams) in parallel. Even with this approach, however, most of the available light is still thrown away and only the read rates are improved.8 In a separate study, the HDS readout was improved by using a resonant optical cavity to recycle light.9

In HDS systems, the coherent properties of laser light are used to record the interference pattern of a known reference beam and of a data-bearing signal beam inside a photosensitive medium (as illustrated in Figure 1). The coherence properties also enable complete constructive interference if the light is made to overlap perfectly in space and time. In our HDS approach, we use an optical cavity for both recording and readout purposes, and can thus provide the maximum benefit. By putting a partially transmissive mirror in the reference beam in front of the recording medium, and by placing a highly reflective mirror (with an appropriate shape) behind the recording medium, we can easily increase the reference beam power by at least 340%.6 In practice with our technique, however, we have observed a 54% increase in reference power during recording. Moreover, by comparing the time evolution of normal recording and cavity recording, we find an average increase in recording speed of 19%. 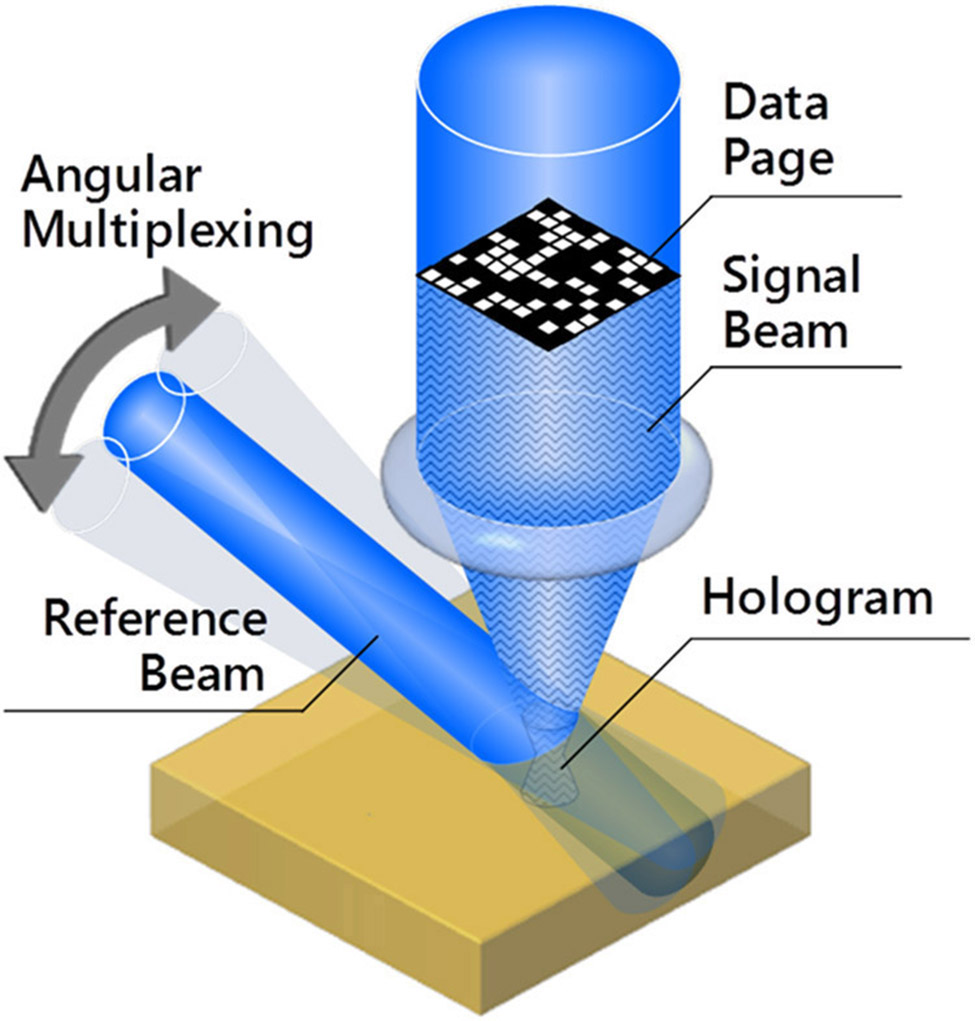 Figure 1. Illustration of the volume holographic data storage (HDS) approach, with which entire data pages (composed of many individual bits) can be stored. Reference beam angles are used to multiplex the data pages at a single location in a disc. In this system, five degrees of freedom (DOFs) are used to access three storage dimensions, but researchers are working to increase data capacity by adding at least two more DOFs.

To accomplish this enhanced recording speed, we used a 100mm-long cavity with a planar entrance couple and a 100mm focal length dielectric mirror on either side of an iron-doped lithium niobate crystal.6 We maintained the cavity resonance with the use of a proportional-gain feedback loop. Based on the power in the cavity, we could thus adjust the cavity length (via a piezoelectric actuator). In addition, we made the signal arm through Fourier transformation of a transmissive object into the crystal, and we monitored the diffraction efficiency of the hologram thus written by using the pseudo-phase conjugate-diffracted signal (which is created by the reverse propagating reference beam). We used a lock-in amplifier to sample and monitor this pseudo-phase conjugate signal. In the final part of our tests, we fit the time evolution of the diffraction efficiency to an exponential function and compared the time constants of these fits.

An example of our experimental results is presented in Figure 2. We show the write-rate enhancement for three separate trials, as well as the diffraction efficiency time evolution for our cavity system and a non-cavity system. We also show an example image recording and reconstruction in Figure 3. With our pseudo-phase conjugate reconstruction we observed an enhanced power of 1.54 during the recording and an expected write-rate improvement of 1.24. 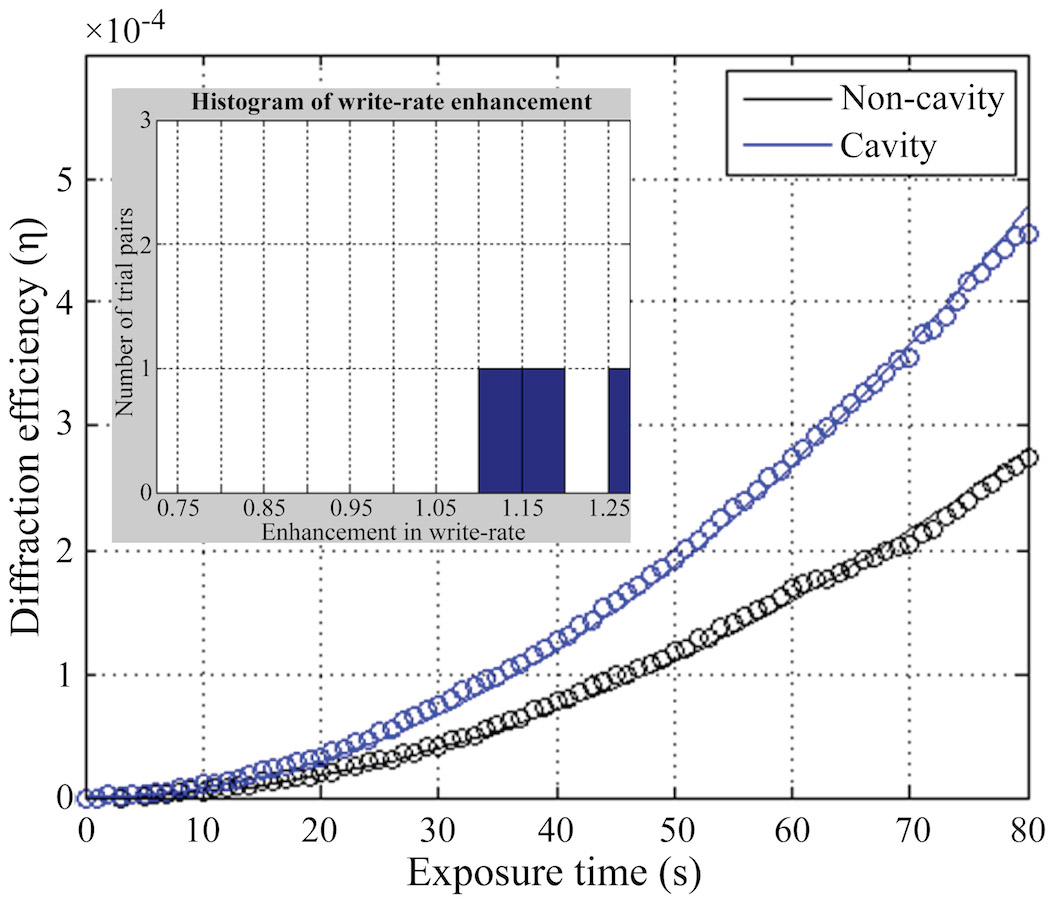 Figure 2. A representative pair (i.e., for cavity and non-cavity HDS) of diffraction efficiency time evolutions. Open circles denote the experimental results, and the lines are the exponential fits to these data sets (used to determine the write rate). Inset: Histogram showing the enhancement of the write rate for three trials. 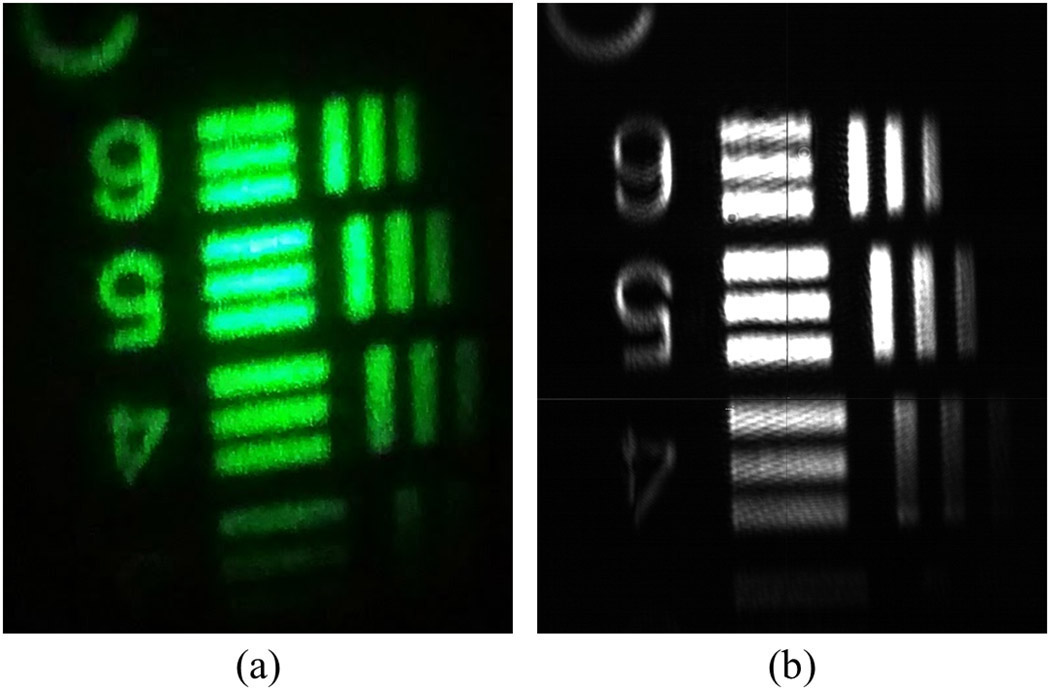 Figure 3. (a) Image of an example object used in the experiments, i.e., that is recorded in the hologram (with cavity enhancement). (b) The pseudo-phase conjugate reconstruction of the object.

From our experimental results it is clear that by careful management of the loss terms, the cavity recording speeds can easily be enhanced by more than 100%. Such increases in write-rate, however, are not the only way to use the increased power of the reference beam. It is also possible to make HDS more ‘green,’ by reducing the source power requirements. By further analyzing our standing-wave cavity-enhanced recordings, we have shown that an additional reflection-type hologram is recorded (because of the reverse propagating reference beam). By balancing the power of the signal and reference beams, and by using this extra grating, we can further increase the recording efficiencies.10

Although 3D ODS remains crippled by resolution limits, HDS applications in ‘big data’ continue to increase (i.e., as more DOFs are achieved and improvements are made to capacity and speed). In our work, we continue to improve the way energy is used in HDS systems. With the use of resonant optical cavities, we can improve energy usage and realize higher data rates or lower source power requirements. Such progress makes HDS an even more attractive, environmentally friendly form of archival storage.

Furthermore, by carefully optimizing cavity losses, we can make the cavities even more effective and add additional DOFs to HDS. Indeed, in future work we will use the orthogonal eigenmodes of cavities as reference beams to add an extra DOF to our storage system and maintain all of its enhancements.

Yuzuru Takashima is an associate professor at the University of Arizona. He received his BS in physics from Kyoto University, Japan, and his MS and PhD in electrical engineering from Stanford University. His current research focuses include holographic data storage, lidar, and x-ray differential phase-contrast imaging.