A new instrument operates in the far-UV wavelength range and is compatible with a range of satellite platforms for science and space-operation support endeavors.
20 December 2016
Larry J. Paxton and John E. Hicks

In the last decade, the need to understand the near-Earth space (‘geospace’) environment has increased as the number of space-faring nations and commercial users has grown. Geospace encompasses the atmosphere and the ionosphere (the neutral and ionized component of the atmosphere above about 80km), and the geospace environment therefore affects low-Earth-orbit satellite operations. The geospace also responds to ‘forcing’ from above (i.e., from the Sun and the magnetosphere) and from below (from waves and tides created in the lower atmosphere).1 Although these drivers are complex and show evidence of chaotic behavior, it is still necessary to characterize the responses and to predict geospace behavior.

Optical remote sensing is used to characterize the inputs to geospace and its response, and to thus drive predictive models. In particular, the unique properties of the far-UV (FUV) spectral region (100–200nm) are exploited for this purpose. The photon energies correspond to electronic transitions and therefore serve as signatures of the densities of key atoms, molecules, and ions that characterize the behavior of the upper atmosphere, e.g., oxygen (O, O2, and O+), nitrogen (N2), hydrogen (H), and nitric oxide (NO). Indeed, O2—a principal constituent of the atmosphere—is strongly absorbing at FUV wavelengths. This means that emissions from geospace clearly stand out against the ‘black’ background of the lower atmosphere. A hyperspectral, cross-tracking imaging spectrometer—known as the Special Sensor Ultraviolet Spectrographic Imager (SSUSI)2—has therefore been included as part of the Defense Meteorological Satellite Program since 1990 to provide a variety of space weather information (e.g., auroral imagery, ionospheric electron density profiles, and neutral density composition changes).

Since 2001, we have been flying Rowland-circle spectrometers for SSUSI.3–16 We carefully designed the system so that performance was balanced with reliability, and with size, weight, and power (SWaP) requirements. Our spectrometers are compact and provide sufficient image quality along the slit to allow 2D (spectral and spatial) information to be obtained. The instruments also include a mirror to scan the slit field of view (FOV) from horizon to horizon (see Figure 1). In this way, we build up a hyperspectral image (with two spatial dimensions and one spectral dimension). The time for each scan is between about 15 and 22 seconds, which means more than a million cycles can be made per year. In addition, we use the scan range to perform on-orbit calibrations, by taking spectral images of well-characterized UV-bright stars. 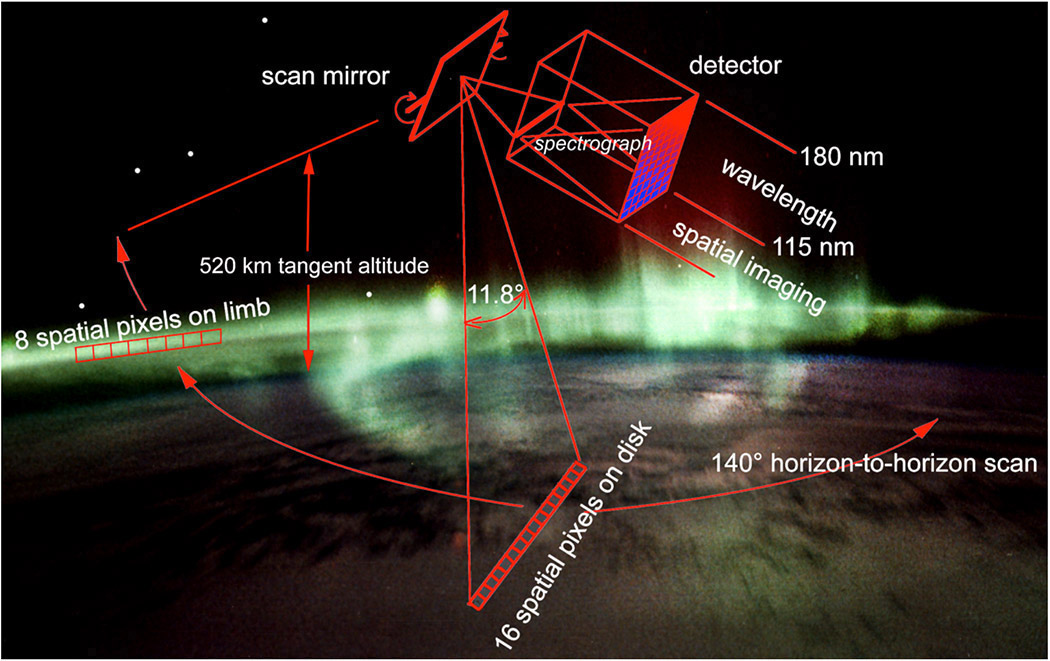 Figure 1. Illustration of the Special Sensor Ultraviolet Spectrographic Imager (SSUSI) scan pattern. The number of disk ‘pixels’ reflects the limitations of the optical system and the constraints on the data rate. The number of spatial pixels is constrained by the data rate. Disk and limb scanning is enabled by the relatively small contrast range at far-UV wavelengths. Stars (represented as dots in the images) are observed on the limb as calibration sources. The spectrograph is represented as a block that shows the spatial and spectral imaging.

The sensors we use for SSUSI, however, were designed in the early 1990s and thus reflected our understanding of the problem space, as well as the technologies that could be incorporated, at the time. For example, the scan mechanism is a stepper motor, coupled through a gearbox and elastomer damper to the scan mirror. This type of mechanical gearbox limits the lifetime of the instrument. For instance, the mechanism of a similar instrument—the Global Ultraviolet Imager (GUVI),17 which is part of NASA's TIMED spacecraft—failed after just over 10,000,000 cycles (about six years). In addition, for our application of SSUSI (i.e., for measuring geospace), it is necessary to know the direction of the FOV and finer measurement steps must be made when making limb observations. We operate SSUSI in two different modes: an imaging mode in which the mirror position is cycled, and a spectrograph mode in which the mirror position is fixed. Although the SSUSI and GUVI designs are functional and finely tuned to their particular applications, their electronics systems are antiquated and cannot be translated to other space platforms.

In our more recent work,18 we have thus developed SSUSI-Lite (see Figure 2) as an updated system. In our design, we have generalized the spacecraft interface so that the system can be flown on any platform. We have also redesigned the low- and high-voltage power supplies and the detector electronics. Furthermore, we can support new detector designs (e.g., the Photek sea-type detector19). The smaller (by more than a factor of two) SWaP of our SSUSI-Lite design also means that we can fly the system on small, as well as large, satellites. Our updated system, however, remains compatible with proven and validated algorithms that are used to convert FUV radiances to geospace environmental parameters (an example SSUSI product is illustrated in Figure 3). 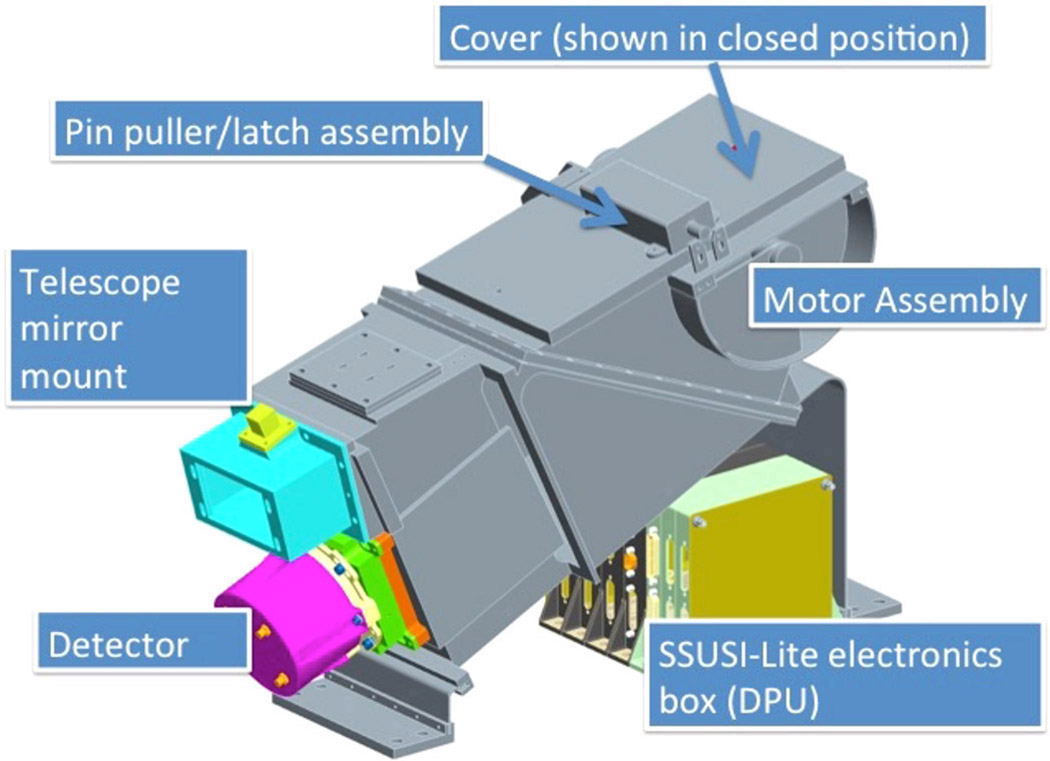 Figure 2. Physical layout of the SSUSI-Lite instrument. The scanning imaging spectrometer and the data processing unit (DPU) are in a stacked configuration to minimize the sensor footprint. The long axis of the housing is about 53cm. 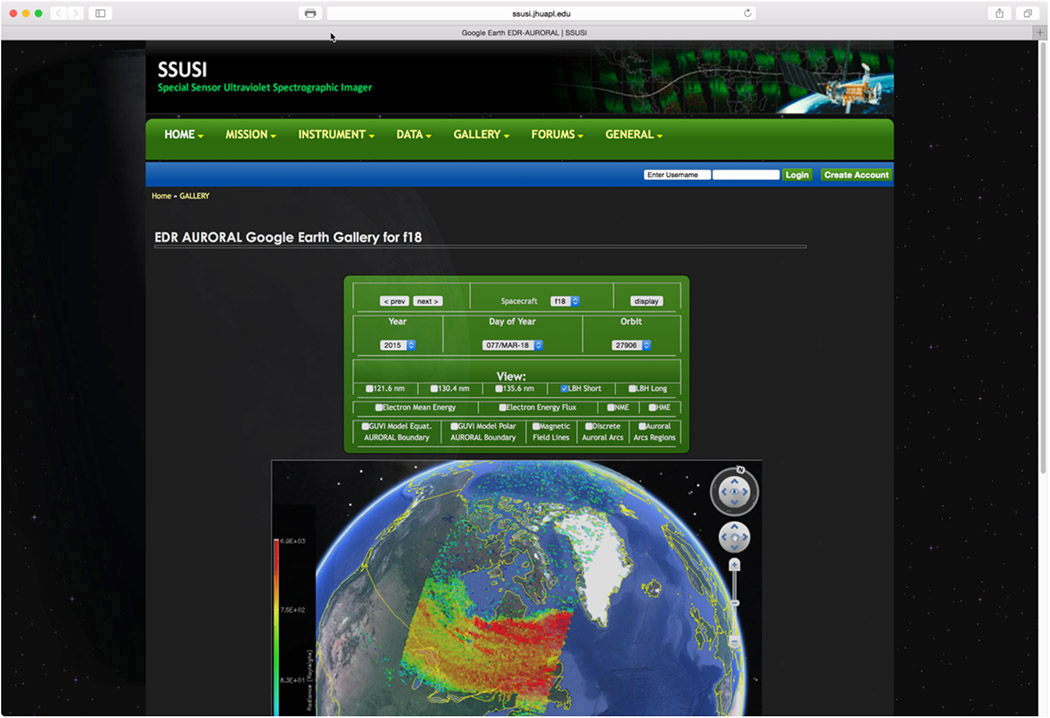 Figure 3. Screenshot of a typical user interface page for SSUSI data mapped onto the Earth. The operation software (consisting of more than 75,000 lines of code) provides access, produces displays, and creates data products from more than 12TB of data.2,17 This image captures one part of the evolution of a geomagnetic storm that caused aurora over North America on 17 March 2015.

For SSUSI-Lite, we have replaced the stepper motor with a limited-angle torque motor that has a resolver. This enables precise positioning and knowledge over the entire angle range. In addition, our system allows us to point the instrument's FOV with a fixed orientation so that we can observe calibration stars as they move through the FOV (i.e., to characterize the instrument response over its long lifetime). This is particularly important because there are no practical FUV calibration sources, and we are unable to look at the Sun (as for some spectral ranges) because of spacecraft accommodation issues.

In summary, we have designed a new FUV spectrometer, known as SSUSI-Lite, which is an update to the existing SSUSI and GUVI sensors. For example, SSUSI-Lite has a SWaP that is smaller by more than a factor of two, but is still compatible with proven algorithms for obtaining geospace environmental information. The generalized spacecraft interface of our system means that it can be accommodated on a full range of satellites and can thus be used to provide ionospheric electron density profiles (for communications and geolocation tasks), neutral density specifications (for satellite drag users), and auroral images (for auroral boundary and auroral clutter), all of which support the scientific research community. We are currently exploring flight opportunities for SSUSI-Lite on upcoming NASA missions and other potential opportunities.

SSUSI-Lite development is performed under the sponsorship of the Remote Sensing Systems Directorate of the US Air Force Space and Missile Systems Center (at Los Angeles Air Force Base). The authors wish to acknowledge the support of L-3 Integrated Optical Systems SSG (Wilmington, MA) for the innovative scanner design. GUVI was built as part of the NASA TIMED program (principal investigator is Andrew Christensen) and SSUSI is part of the Defense Meteorological Satellite Program (DMSP). The success of SSUSI-Lite, SSUSI, and GUVI is thanks to dozens of people at the Johns Hopkins University Applied Physics Laboratory, Aerospace Corporation, and the DMSP office, including the contributions of Jim Burgum, Gary Bust, Joe Comberiate, Ron Dennison, Glen Fountain, John Goldsten, Mike Kelly, Bernie Ogorzalek, Tom Pardoe, Keith Peacock, Giuseppe Romeo, Bill Skullney, Tom Strikwerda, Joe Suter, Michele Weiss, Brian Wolven, and many others. The GUVI project was funded by NASA. The algorithms used in this work were developed in collaboration with the team from Computational Physics Inc. (led by Doug Strickland, with major contributions from Scott Evans). The SSUSI calibration/validation team includes contributors from the Aerospace Corporation (including John Cadou, Paul Straus, and Jim Hecht).

Larry Paxton has more than 35 years of experience in space science and has published more than 250 papers in the field. He is the principal investigator (PI) of the SSUSI and SSUSI-Lite effort, as well as a co-PI of GUVI. He is also the head of the Geospace and Earth Sciences group at JHU/APL.

John Hicks graduated from the US Air Force Academy with a BS in aerospace engineering. He has more than 25 years of experience in the design and construction of both aircraft and space sensors. He is also an adjunct professor at the School of Engineering at Morgan State University Baltimore.