Detecting naval vessels based on their IR characteristics is a key task for many defense organizations. The emissions (i.e., the shape and thermal energy) of such vessels produce an overall IR signature that can be analyzed to detect and, subsequently, to track them. For this reason, numerous models have been developed over the years to predict the IR signature of ships.1 The hot exhaust gases that are produced by a ship's engine represent one of the main contributions to its signature. Many modern military vessels are therefore equipped with IR-signature suppression systems (i.e., where steam is injected into the exhaust gases to reduce their self-emission).2

In addition to the IR signal, however, it is possible to obtain information about a ship from its IR absorption/emission patterns. In the case of common combustion gases (e.g., carbon monoxide, CO, and carbon dioxide, CO2), these patterns are a function of wavelength. The IR signatures of ship plume therefore contain important spectral features that, when analyzed, provide information that cannot be suppressed. These characteristic absorption/emission bands cannot, however, be discriminated from other hot sources with a conventional broadband midwave IR (i.e., MWIR, 3–5μm wavelength) imaging system. Using an IR hyperspectral sensor is the state-of-the-art technique for simultaneously obtaining spatial and spectral information. Passive IR remote sensing enables distant objects (i.e., at hundreds and even thousands of meters) to be characterized without the need for any illumination source or extra setup.

In our work, we used Telops' Hyper-Cam to perform standoff MWIR hyperspectral imaging for the purpose of characterizing an operating ferry boat. This imaging system combines Fourier transform IR (FTIR) technology with focal-plane array (FPA) imaging, and enables the spatial, spectral, and temporal resolution of the target to be obtained simultaneously in the form of a hyperspectral cube.

The broadband IR image of a ship that we obtained using our system is shown in Figure 1(A), and the IR spectra of selected pixels are shown in Figure 1(B) and (C). The hyperspectral cubes that we obtained using our setup contain data from three dimensions (two spatial and one spectral). Because of this, a high-resolution IR spectrum is associated with each pixel within the cube. The broadband IR image associated with a hypercube is simply the sum of all contributions over the spectral range of the IR FPA detector. The results show that the chimneys of the ship are relatively warm compared with other objects in the scene, conforming to reasonable expectations. In addition, very little contrast is associated with the hot exhaust gases. 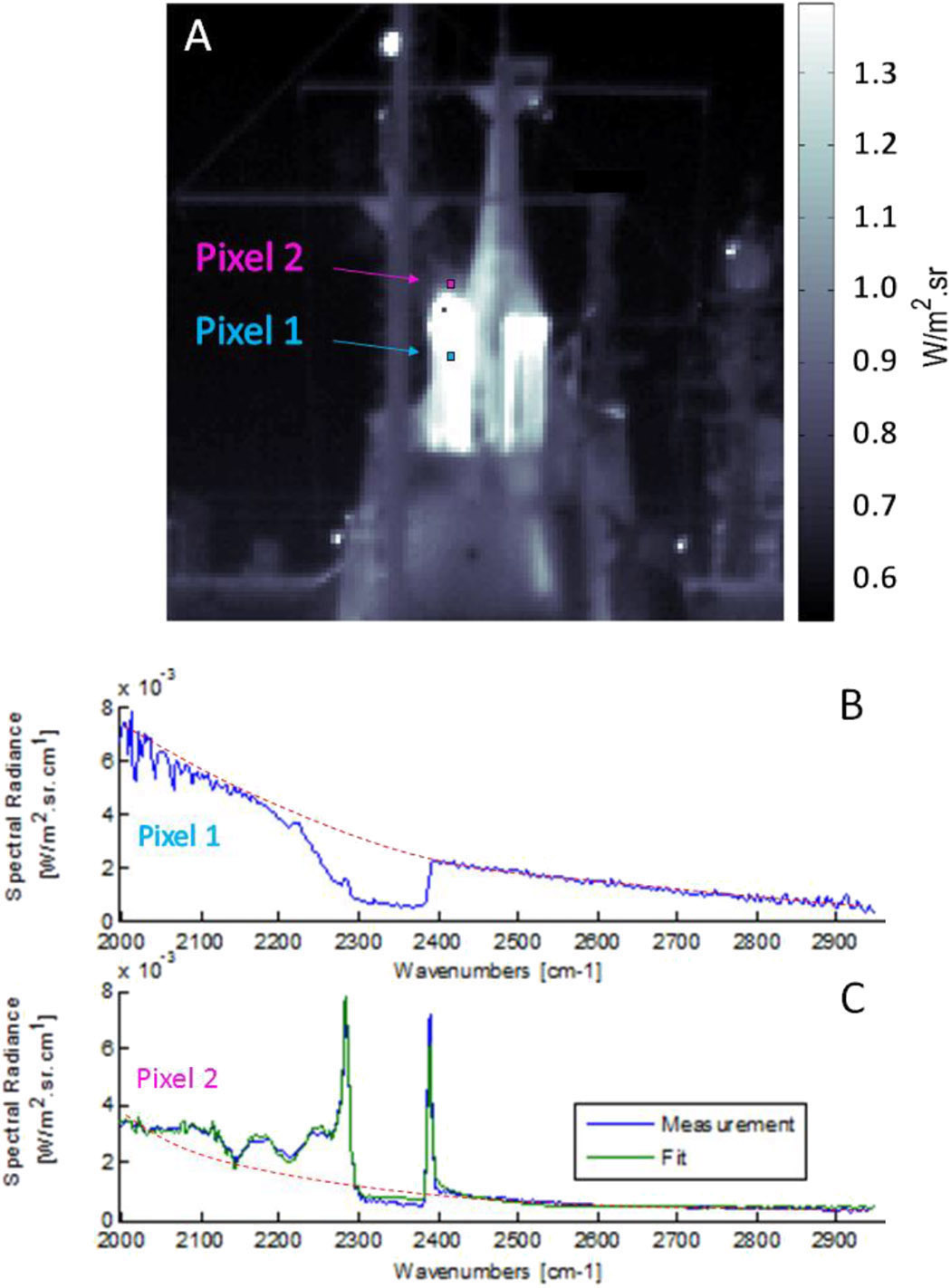 Figure 1. (A) The broadband IR image of a ship plume, obtained with Telops' Hyper-Cam, and the associated IR spectrum of the chimney's (B) body and (C) exhaust gases obtained by hyperspectral imaging (blue) and our radiative transfer model (green). The red dotted line in (B) and (C) represents the estimated background radiance. ppm.m: Column density (parts per mullion multiplied by meters).

IR self-emissions from combustion gases—such as water vapor (H2O), CO, and CO2—take place over a relatively narrow spectral range compared with that of the IR FPA detector. Consequently, their contribution to the overall signal (as in a conventional broadband image) is relatively small. The IR spectrum of a pixel associated with the chimney's body is shown in Figure 1(B) as a blue curve. The curve has an exponential-decay shape that is typical of a blackbody self-emission curve in the MWIR. We also compared the results that we obtained for the background radiance contribution (in this case, the chimney's body) using hyperspectral imaging to the predictions of our radiative transfer model, and found the two to be in good agreement: see Figure 1(C).

The series of sharp absorption bands between 2000 and 2075cm−1, and the broad absorption band between 2250 and 2400cm−1, are associated with atmospheric H2O and CO2, respectively. Strong emission bands from hot CO (2050–2200cm−1) and CO2 (2280 and 2400cm−1) gas can also be seen. The information contained in the spectrum of each pixel of the hyperspectral cube is a convolution of the background, gas plume, and atmospheric radiance contributions. The development of radiative transfer models that can describe this phenomenology3, 4 therefore allows us to estimate the relative contributions of each part within the measurement.

The thermodynamic temperature profile of the gas plume (estimated from our radiative transfer equation) is shown in Figure 2(A), and the profile conforms to expectations for a ship plume.3 Column density maps can also be estimated from the model for each IR-active molecule. A typical result for CO2 is shown in Figure 2(B). Because Telops' Hyper-Cam uses FTIR FPA technology, we can collect results—like those presented in Figure 2—as a function of time. This provides unique time-resolved chemical imaging information. Direct quantification (e.g., in parts per million) via remote sensing is generally not possible from a single 2D image because depth cannot be accurately estimated from the data only. The use of other strategies, however (e.g., optical flow determination5), enables quantities such as mass flow rates (e.g., in kilograms per hour) to be estimated from standoff imaging measurements. Passive IR hyperspectral imaging provides additional information for model validation that is not available using conventional broadband IR imaging, thereby opening up new possibilities in signature measurement.

Figure 2. (A) The thermodynamic gas plume temperature map and (B) carbon dioxide (CO2) column density map, estimated from the best fit of our radiative transfer model equation for each pixel. Results are displayed over the IR broadband image for clarity.

In summary, we used passive hyperspectral remote sensing to obtain information about the combustion process of a ship engine. Our results show that hyperspectral imaging can be used for the standoff detection of distant ships. We are now working on further applications for standoff thermal IR hyperspectral imaging. Our current research focuses on methane imaging and volcanic emissions.

Marc-André Gagnon is an application scientist at Telops. He received his PhD in physical chemistry from Université de Montréal, Canada, in 2009. He regularly contributes to the progress and development of new applications in the field of IR remote sensing through publications and conferences.