Linear concentrators for the production of solar thermal electricity (STE) are currently commercially available in the form of parabolic trough (PT) collectors.1 In addition, PT plants can be used to achieve several hours of energy delivery at nominal power, making STE truly deliverable. This important feature is realized by operating the plants at just below 400°C, as well as by using thermal oil as the heat-transfer fluid and molten salts as the heat-storage fluid. To bring the electricity production costs down, however, it is necessary for linear concentrator technology to reach the next logical step. In other words, increased concentration is required to enable operation at higher temperatures (high-temperature operation allows heat to be converted to electricity with greater thermodynamic efficiency). A high concentration level also brings the advantage of reducing the number of rows in the concentrator field, which in turn provides cost benefits (i.e., related to the reductions in receiver length, receiver volume, pipe length, number of thermal loop components, and thermal/parasitic losses associated with the loop).

PT concentrators are currently being designed to achieve higher concentration values.2, 3 These conventional PT concentrators are essentially focusing optics solutions, however, and the concentration levels that can be achieved are thus far worse than the potential limits set by nonimaging optics.4, 5 Although conventional PT optics can be designed to accommodate a second-stage concentrator (or a parabolic-like primary concentrator can be designed with a secondary concentrator for a given receiver) to provide a much higher concentration, the resulting optics can become too large (i.e., impractical for manufacturing, transportation, installation, and operation purposes). This is because the use of evacuated tubular receivers is generally involved and these only come in a single standard size (with a diameter of 70mm). Therefore, from a typical aperture of about 6m, a concentration value of about 26 can be achieved (i.e., about double the nonimaging optics value), but the resulting final aperture would be about 12m.

In our work, we have therefore shown that linear Fresnel (LFR) technology can be used to reach even higher concentration values than with conventional PT concentrators (even though they suffer from stronger incidence-angle-modifier effects), and that they have several added benefits. For example, LFR optics are the most compact of all STE technologies (on a unit nominal power basis). The small and practical sizes of LFR concentrators also mean that they have low wind loads and can therefore be constructed with lighter supports. Moreover, relatively inexpensive, flat reflector components and stationary receiver tubes (that do not require flexible connections) can be used in the construction of LFR concentrators. When combined with modern evacuated tubes, we can reduce the instantaneous collection efficiency losses of our LFR concentrators and produce smaller heat-loss coefficients. In this way, the many advantages of LFR concentrators enable inherently lower cost per square meter for STE production.

To date, a number of novel LFR concentrator configurations have been developed. These include compact multiple-receiver LFR concentrators,6 tailored edge-ray concentrators (i.e., multiple secondaries combined with primary mirrors, placed on an etendue-conserving curve),7 and simultaneous multiple-surface secondary concentrators.8 With our advanced LFR configurations,9, 10 however, we can achieve the highest concentration possible (for any given acceptance angle). The concept of nonimaging optics is a crucial part of our advanced solutions because it gives rise to two essential conditions that permit high optical performance, i.e., the conservation of etendue and a concentration that approaches the maximum concentration limit. We expect that our advanced LFR concentrators will reach very competitive instantaneous efficiency values at an operating temperature of 565°C. This temperature is particularly desirable because it is above the operating temperature of modern steam turbines (540°C) in typical thermal power plants, but below the critical barrier (600°C) that would require special developments and the use of expensive/sophisticated materials.

Our latest advanced LFR concentrator includes a second-stage dual asymmetric macrofocal compound elliptical concentrator, with zero gap losses (see Figure 1).9 We use direct normal irradiation data and a ray-tracing calculation to simulate the expected performance of this system. We find that this concentrator can be used to achieve the conditions for STE production at well below 10cents/kWh, with seven hours of storage at nominal power production. 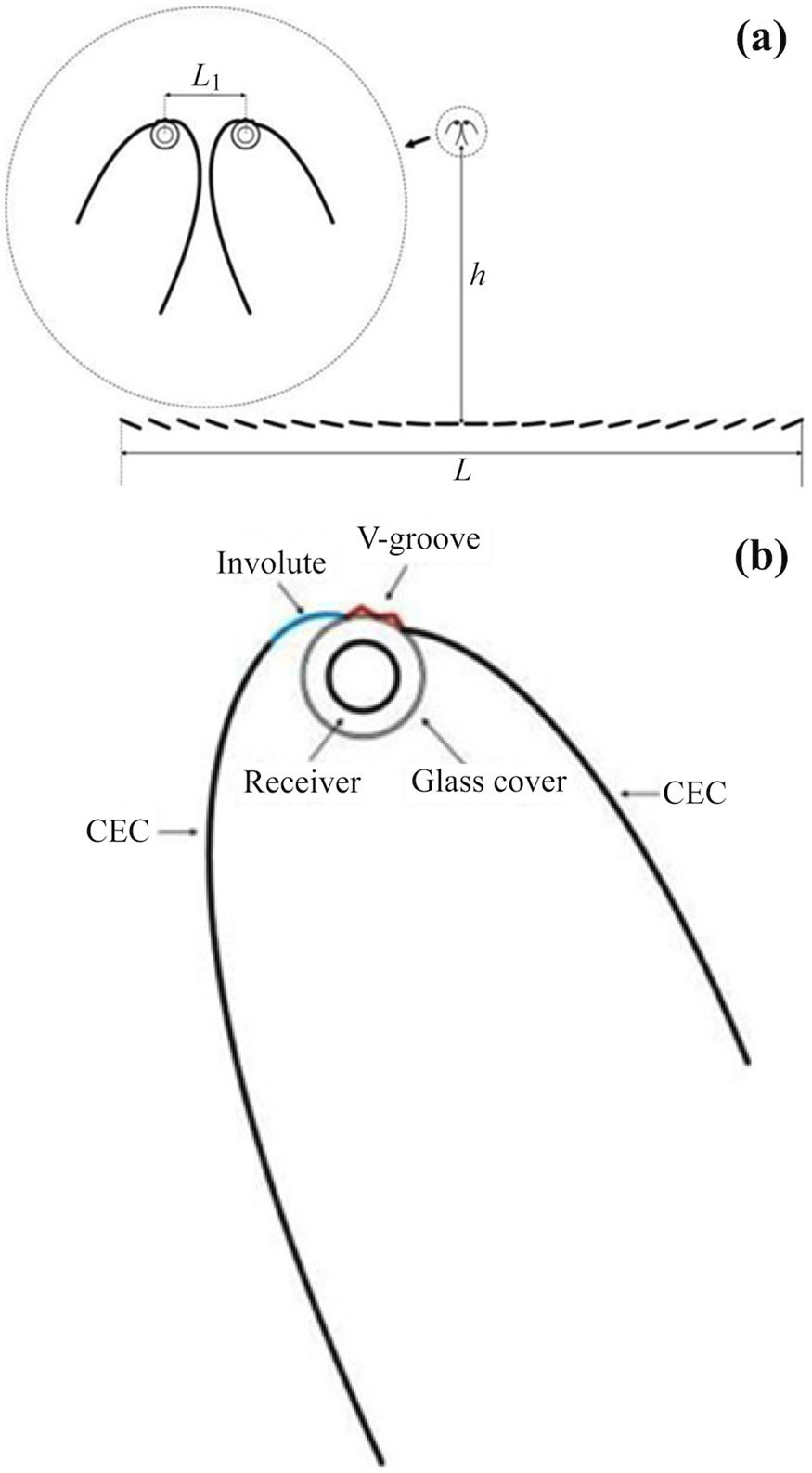 In summary, we have developed advanced LFR concentrators for low cost per square meter production of solar thermal electricity. To achieve this, we use novel nonimaging optics solutions to maximize the concentration of the devices and to achieve matched etendue. We also use molten salts as the heat-transfer and heat-storage fluids. In addition, we obtain high operating temperatures that provide high thermodynamic efficiency for converting heat to electricity. In this way, our work contributes to the important goal of reducing the cost of electricity production. In the next stage of our research we plan to demonstrate our concept on a solar-thermal-plant scale.