The x-ray tube (invented in 1895) is at the heart of clinical and preclinical x-ray imaging techniques. For instance, the conventional (bio)medical x-ray tube is a mature device that has reached—through more than 100 years of evolution—its technological limits. The obvious advantages of the x-ray tube include its reasonably small form factor, combined with high reliability and good affordability. Nonetheless, this technology does have numerous inherent deficiencies. These problems include the relatively large effective x-ray spot size (which determines the spatial resolution of images that are obtained). Unfortunately, with x-ray tubes, the focal spot size can only be reduced at the expense of diminished brilliance and unacceptably long imaging times. Furthermore, the isotropic and continuous-wave nature of x-ray tube emissions is problematic. These characteristics mean that most of the produced x-rays are wasted and that they provide poor temporal resolution. Recent advances in laser physics and technology have included the introduction of powerful (i.e., 100TW–1PW) and ultrafast (10–100fs) lasers.1, 2 In the near future, therefore, it seems possible that laser-based x-ray imaging devices could be built to overcome the limits of existing systems and to shift x-ray imaging paradigms. In turn, the potential new technology would enable ultrahigh-resolution and fast clinical and preclinical imaging.

In previous work, it has been shown that a laser wakefield accelerator (LWFA) can be used to achieve a compact synchrotron-wiggler-like x-ray source, and that this approach could become a ‘game changer’ in the field of biomedical imaging (in the 15–150keV energy range). In a LWFA, ultrahigh intensity laser pulses (>1018W/cm2) are focused onto ultrasonic gas jets. This causes the ejection of electrons from a region of high light intensity and leaves behind a ‘wakefield’ of plasma waves that can travel at close to the speed of light. The heavier ions in this plasma have low mobility (i.e., they hardly move during the interaction) and are therefore left behind, which creates a plasma wakefield bubble. If the laser pulse is properly shaped, electrons can be injected into the bubble and accelerated to form a quasi-monoenergetic electron beam.3–6

In our work, we have made several investigations of various processes (e.g., the use of a LWFA) for electron acceleration.7, 8 The synchroton-wiggler-like oscillations of electrons in a LWFA create a very bright micrometer-sized, highly directional, and very short (about 10fs) burst of x-rays.9–11 This phenomenon—known as laser betatron radiation—was first demonstrated in 2004,9 but where the emitted radiation was in the soft x-ray range. In contrast, we reported the generation of laser betatron radiation in the hard x-ray range (>10keV) in 2010.12 Indeed, with our existing laser betatron x-ray source at the Institut National de la Recherche Scientifique, Canada (based on a 250TW laser, working at a 1Hz repetition rate), we can perform ultrahigh resolution tomography of animal models in less than 10 minutes, or we can screen (using 2D images) 18,000 objects in a five-hour run.

To achieve laser betatron radiation in the hard x-ray range, we focused an incident laser pulse, with an intensity of 100TW, on a supersonic gas jet. In this scenario the laser energy was 3J, the laser pulse duration was 30fs, and the laser repetition rate was 10Hz. The repetition rate of our experiments, however, was limited to 1Hz because of the gas-jet target hardware that we used. Under these conditions, we thus generated 2.2 ×108 photons/bandwidth/steradian/shot at 10keV.12 Over the whole spectrum, we estimated the total number of generated x-ray photons as 109 (confidence interval of 8.0–13.5 × 108) and we achieved an x-ray spot size of 1.7μm (full width at half-maximum).13

We have also used the CALDER code (developed by the French Alternative Energies and Atomic Energy Commission)13 to make 3D particle-in-cell calculations. Such calculations—used in plasma physics and laser-based particle accelerator applications—allow the trajectories of charged particles in self-consistent electromagnetic (or electrostatic) fields to be computed on fixed mesh. Our radiation intensity results (see Figure 1) show that the laser beam quality plays a major role in the LWFA performance.14 We also find that the betatron x-ray source performance can be improved by increasing the laser pulse energy and the intensity that is incident on the gas jet target. It is also necessary, however, to precisely control the laser pulse imperfections.14 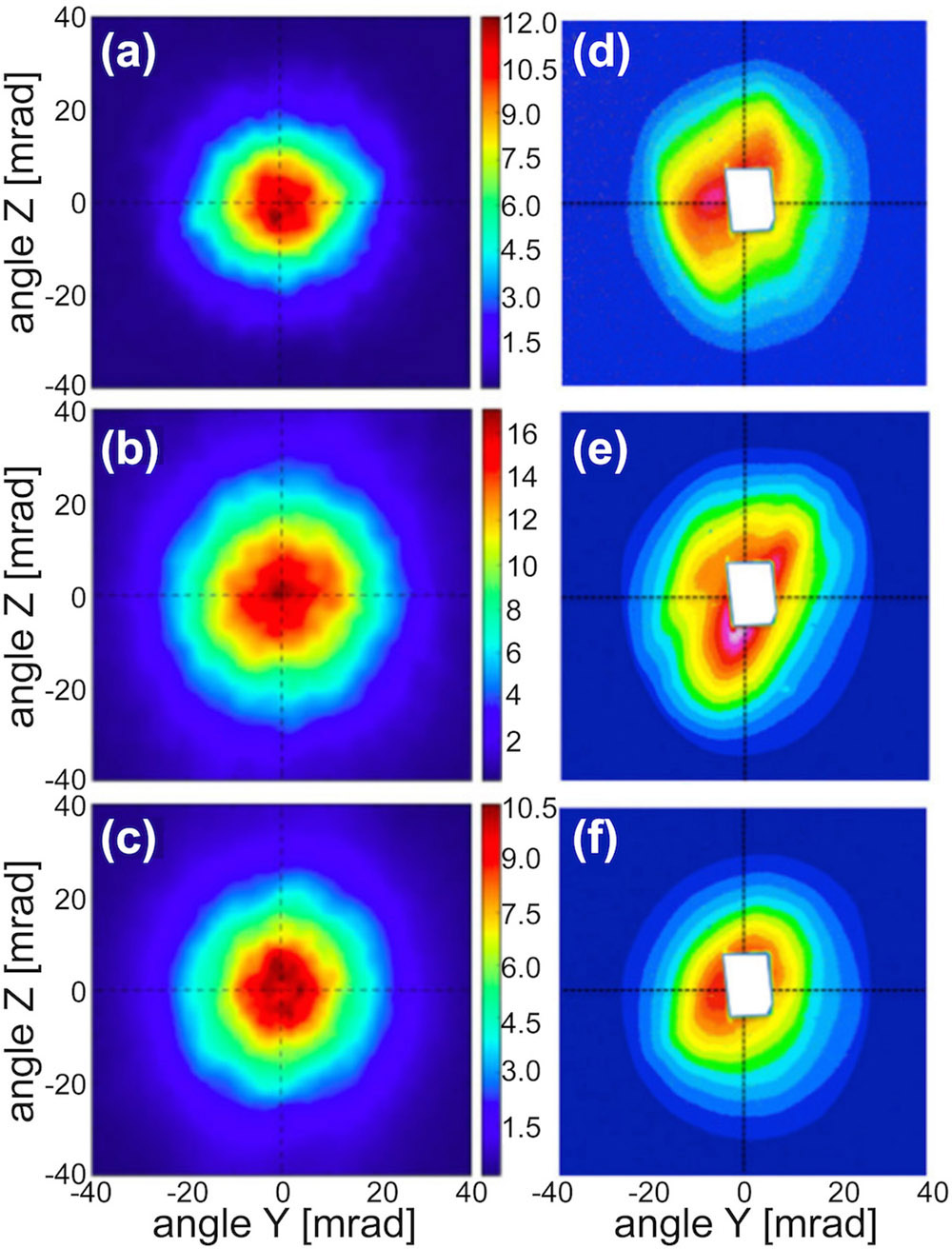 Figure 1. Calculated spatial distribution (i.e., along the y and z axes) of the radiation intensity per angle unit (mJ/mrad) achieved in the laser wakefield acceleration (LWFA) approach, with an optimized laser beam and a nozzle length of (a) 3mm, (b) 5mm, and (c) 7mm.14 The spatial distribution of the radiation intensity (at 100TW) measured on the target (where the white area is an aperture in the imaging system that is used to simultaneously record the spectrum) is shown for the same examples in (d), (e), and (f), i.e., for nozzle lengths of 3, 5, and 7mm, respectively.

With the use of our novel betatron x-ray source, we can obtain a phase-contrast hard x-ray image with only one laser shot.15 For example, we achieved a reasonable signal-to-noise ratio of about 6 for the image shown in Figure 2. In contrast, 6000 laser shots were required to produce a similar-quality image—of the same object, with the same detector in the same geometry—with an ultrafast laser-produced plasma x-ray source (i.e., involving laser-pulse interactions with solid targets). 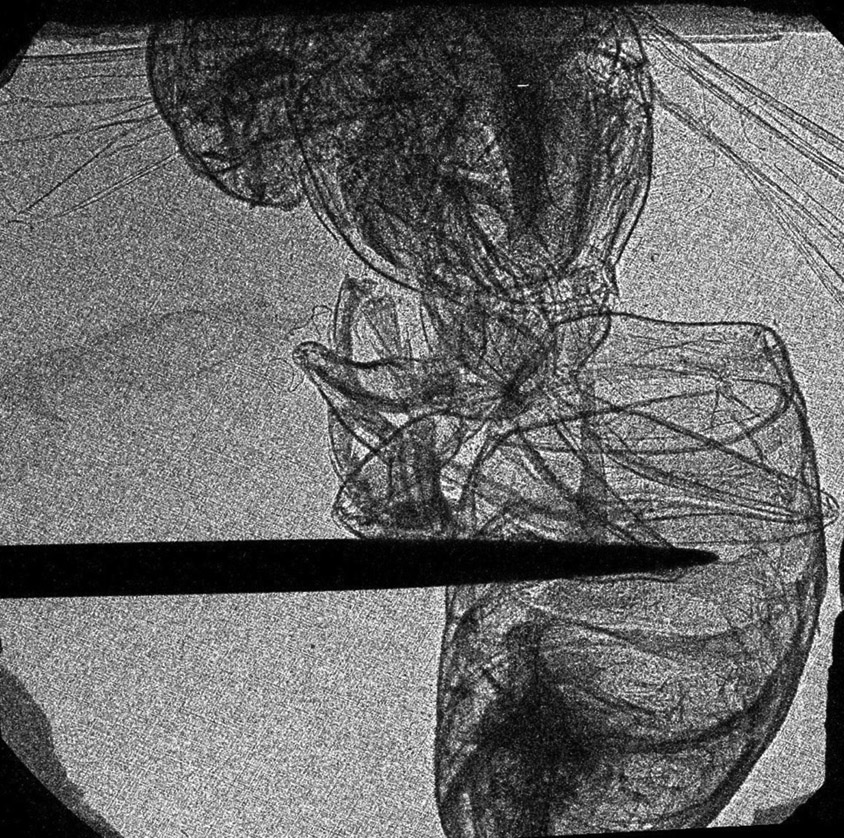 Figure 2. Phase-contrast hard-x-ray image of a wasp. This image was obtained with only one laser shot at the Institut National de la Recherche Scientifique betatron beamline.15

In summary, we have demonstrated a novel, ultrafast, laser-based betatron hard x-ray source. Our approach opens up new routes for high-throughput 2D imaging and fast 3D imaging of biological objects and animal models, with ultrahigh spatial (about 1μm) and ultrashort temporal (down to about 10ps) resolutions,16–18 and has the potential to overcome the critical barriers (i.e., low spatial and temporal resolution, and low brilliance) of conventional non-synchrotron x-ray sources. In addition, our work may lead to a paradigm shift in a wide range of imaging applications (e.g., preclinical in vivo x-ray imaging of animal models, and ultimately of human patients). Our future research with our x-ray source will take two directions. First, we will use the source for preclinical imaging and the detection of thromboembolic events, micro-strokes, and mini-strokes (with the use of specifically designed phantoms and small animal models). The second focus of our work will be the innovative development of a phase-contrast high-throughput screening system for global food safety applications.

Jean-Claude Kieffer is a full professor. He has held the Canada Research Chair (Tier I) in ultrafast photonics, applied to complex systems, since 2002.