The specific detection of biomolecules in biological samples is extremely important in medical diagnosis,1 single-cell analysis,2, 3 and monitoring disease recurrence.4 However, difficulty in measuring the inherent physical features of biological analytes means that label-based techniques—i.e., in which some sort of tag (or ‘label’) is attached to molecules, viruses, or cells to capture them—have primarily been used to date for biosensors. The label in this technique may be a metal nanoparticle, fluorophore-embedded bead, semiconductor quantum dot, or a particular antibody that can initiate an enzymatic reaction. In practice, however, the labels can physically and functionally interfere with the assay and they require a high degree of development.

In contrast to label-based measurement techniques, label-free detection approaches are based on the use of a transducer to measure the physical properties of biological analytes. With such transducers it is possible to directly measure the bulk physical properties (e.g., electrical impedance, heat capacity, or refractive index) of a sample. Surface plasmons (SPs)—collective oscillations of conducting electrons at the interface between a metal and a dielectric—are thought to be theoretically ideal elements within transducers.5 The resonant frequency of SPs is strongly dependent on the shape and the refractive index of the surrounding media, and this remarkable property has already been exploited in SP resonance (SPR) biosensors. Metals such as gold and silver are commonly used for plasmonic applications.6–11 Although silver has better optical properties than gold, it has so far rarely been used for biosensing applications because of its high oxidation susceptibility. Gold (i.e., the popular choice), on the other hand, presents high losses at IR frequencies because of intraband transitions that limit the confinement of SPs and reduce their sensitivity. Moreover, gold does not adsorb biomolecules in an ideal manner because of its intrinsic hydrophobicity and high chemical inertness.12

Graphene (a single atomic plane of carbon atoms) has recently emerged as a revolutionary material because of its astounding physical properties, not least its optical characteristics.13 It has been shown, both theoretically and experimentally, that graphene itself supports the propagation of surface plasmon waves in mid- and far-IR regions (i.e., with tunable Fermi energy levels). Compared with metal plasmons, plasmons on graphene are more strongly confined. Furthermore, π-stacking interactions (π-binding) and the high surface-to-volume ratio mean that biomolecules adsorb strongly to the surface of graphene. In our work, we have therefore designed a label-free, graphene-based biosensing device with ultrahigh sensitivity that operates in the IR frequency band. With our device we can achieve a sensitivity of up to 3053nm/refractive index unit (RIU), which is three times greater than the sensitivity of current top-level, metal-based plasmonic biosensors.

In the proposed structure of our graphene plasmonic biosensor (see Figure 1), arrays of graphene nanoribbons are periodically patterned onto the lower and upper transparent substrates. The sensing medium, which contains the biological analytes of interest, is sandwiched between the two substrates. In this configuration, the sensing medium is thus in direct contact with graphene nanoribbons. In our design, we model graphene as a thin layer (0.34nm thickness) and we select the Fermi energy level as 0.7eV. In addition, the period and the nanoribbon width are 400 and 600nm, respectively. The electric field distribution on top of the graphene nanoribbons, when they are illuminated from the top with a transverse magnetic polarization at normal incidence, is shown in Figure 2. 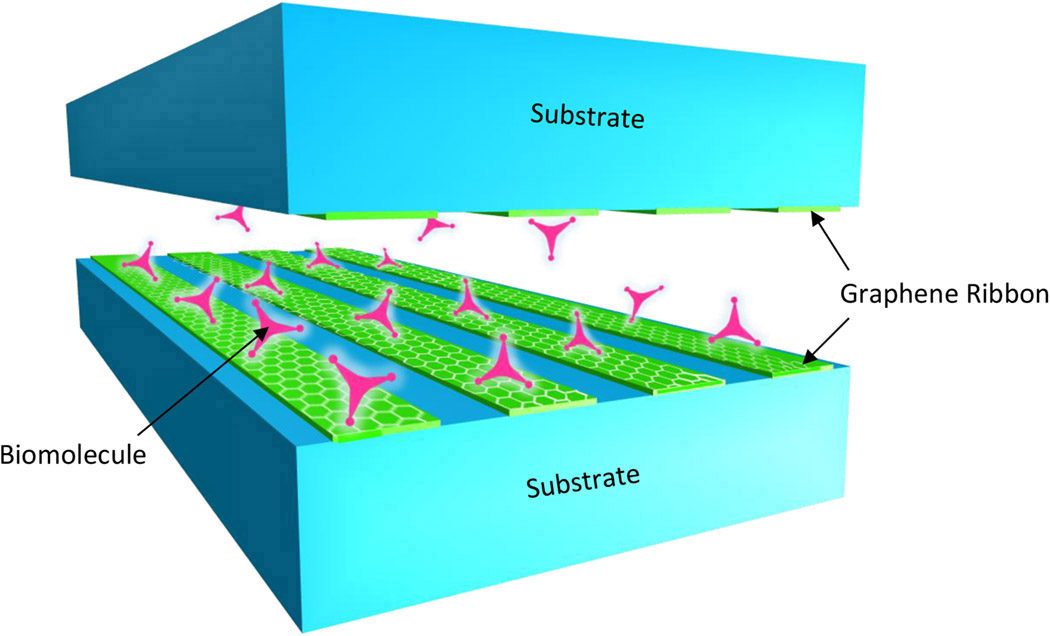 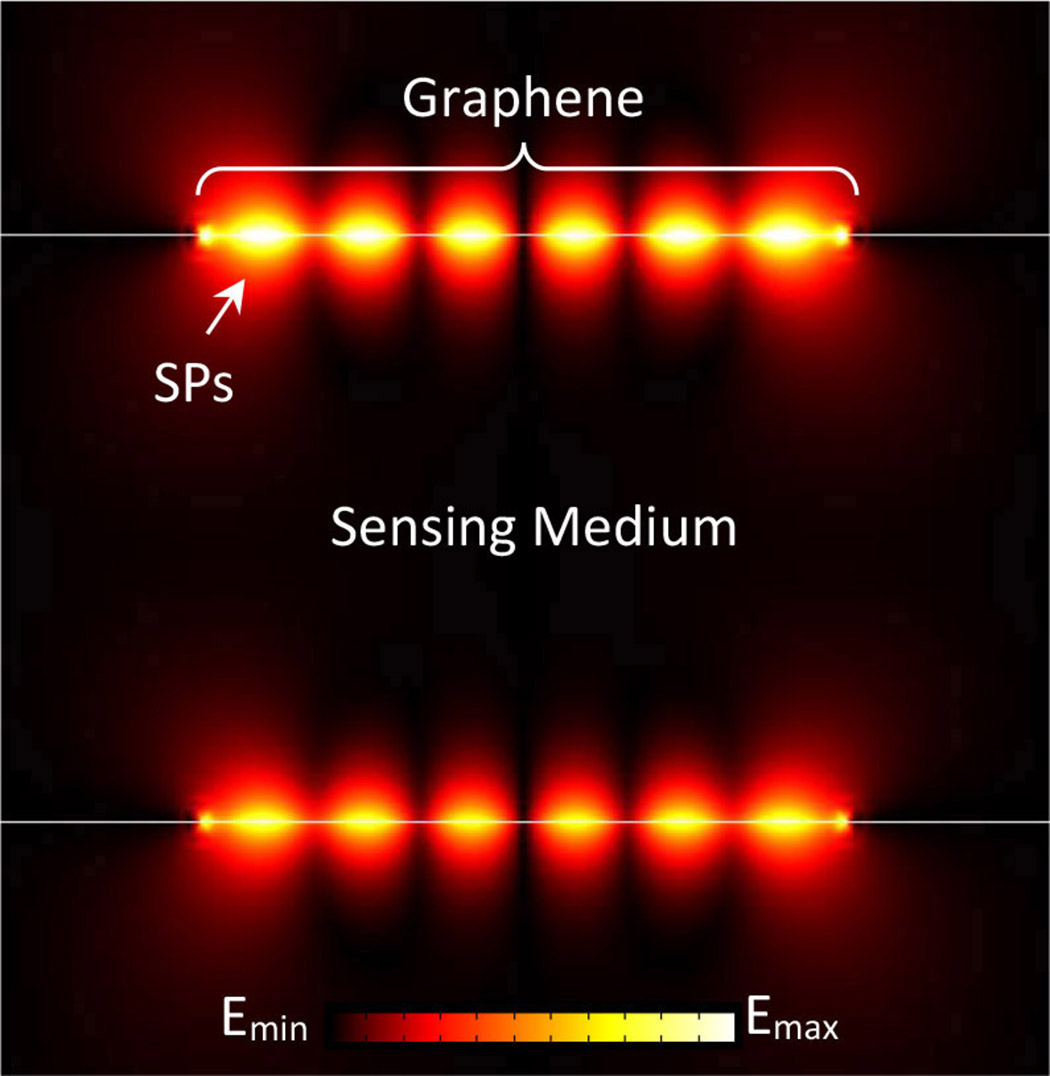 Figure 2. Electric field distribution on the top of one of the graphene nanoribbons in the proposed biosensor. SPs: Surface plasmons. Emin, Emax: Minimum and maximum electric field, respectively.

We have evaluated the performance of our plasmonic biosensor by examining its sensitivity, which we define as the ratio of the shift in resonance wavelength to the refractive index (RI) change in the sensing medium. To select a proper substrate, we chose commonly used materials such as magnesium fluoride (MgF2), poly(methyl methacrylate), silica, silicon carbide, and silicon. We also selected the RI range of the sensing media so that it encompasses commonly studied biomolecules, including human immunoglobulin G, human serum albumin, single-stranded DNA, and double-stranded DNA (which have RIs of 1.41, 1.445, 1.462, and 1.53, respectively) in water solutions. Our sensitivity results for these various substrates are summarized in Figure 3. We find that the highest sensitivity (3053nm/RIU) is for MgF2, i.e., a low-RI substrate. This value is three times higher than the sensitivity of current gold-based plasmonic biosensors. We can explain the high-sensitivity levels of graphene from the short wavelength of the graphene plasmons, which causes the group velocity to decrease and the interaction time between biomolecules and light to increase. 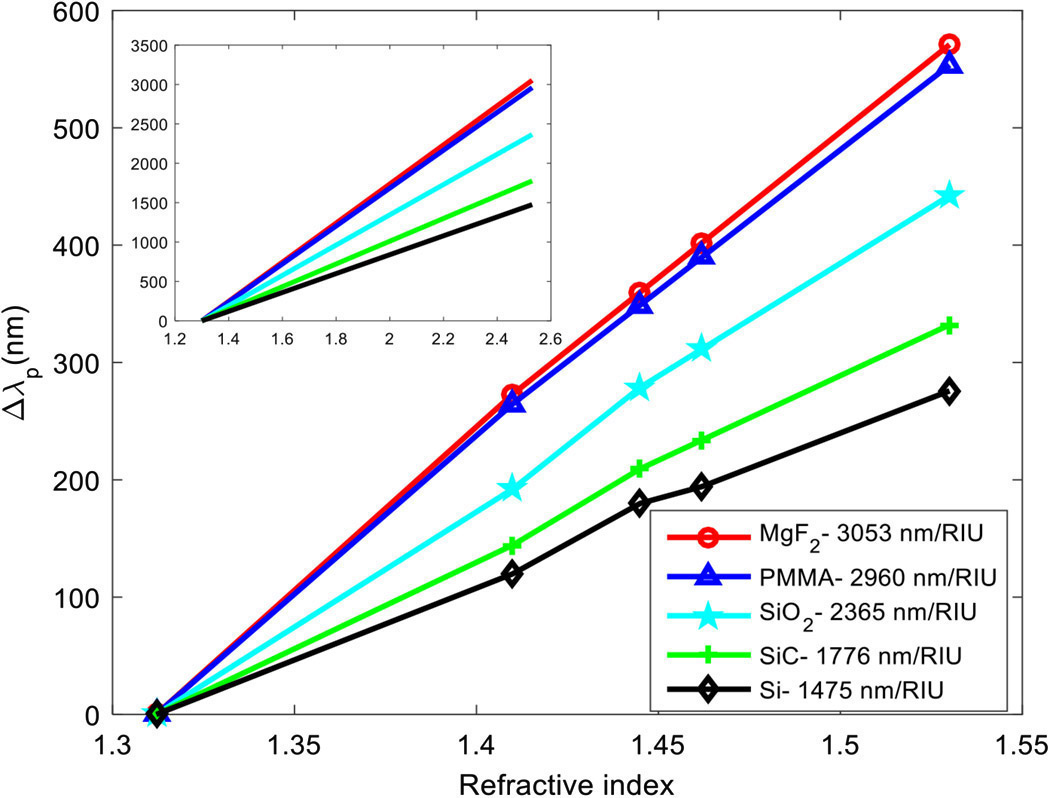 In summary, we have introduced an ultrasensitive biosensing device in which plasmon oscillations on graphene are utilized. The ultrahigh sensitivity of our proposed structure means that it can be exploited for single-molecule detection and screening of cancer markers (e.g., circulating tumor cells and nucleic acids within the bloodstream). Furthermore, since the sensing medium is sandwiched between two dielectric substrates, our device can readily be used for microfluidic and in vivo analyses. The combined high sensitivity and specificity of our biosensors holds promise for potential breakthroughs in clinical diagnostics at point-of-care to facilitate timely medical decisions. In our future work we will further study the physics of surface plasmon propagation in microfluidic devices, which is vital for the development of these ultrasensitive biosensors, and we will aim to increase their sensitivity.

Hamid Chorsi is a research associate. His research is focused on novel nanomaterials for biomedical applications and lab-on-chip diagnostic devices.

John Zhang is a professor. He received his PhD in electrical engineering from Stanford University and was a postdoctoral research scientist, in systems biology, at the Massachusetts Institute of Technology. He is a recipient of a Wallace H. Coulter Foundation Early Career award, NSF CAREER award, DARPA Young Faculty award, and the National Institutes of Health Director's Transformative Research award. He is also a fellow of the American Institute for Medical and Biological Engineering. His research is focused on exploring bioinspired nanomaterials, scale-dependent biophysics, and nanofabrication technology, with the aim of developing new diagnostic devices, implantable biosensors and actuators, and methods for probing complex cellular processes and biological networks that are critical to development and diseases. He has published more than 120 peer-reviewed papers, and has received seven US, and more than 30 international, patents. His research findings are licensed to two companies and he has published a textbook titled Molecular Sensors and Nanodevices: Principles, Designs, and Applications in Biomedical Engineering.

Meysam Chorsi is a PhD student in the mechanical engineering program, with a specialization in biomaterials and drug delivery systems.