In recent years there has been a rapid development of display technologies, with ever higher pixel density and ever smaller feature sizes being achieved. For example, modern smartphone displays now have densities of more than 800 pixels per inch (ppi) and have pattern elements down to 1.5μm (and they are likely to become even denser in the future).1, 2 These display improvements, however, have also given rise to dramatically higher photomask technology requirements. Indeed, in high-volume production for state-of-the-art displays, many mobile screens are exposed simultaneously from a meter-sized photomask.2 The associated requirements for the overlay precision (i.e., accuracy of lateral dimensions) are quite formidable.

To verify the geometry of photomasks used for the production of smartphone screens, we have previously developed a metrology tool—known as the Prexision Mask Metrology System (Prexision-MMS)—which can be used for mask sizes up to that of Generation 8 (G8), i.e., 1200 × 1620mm (see Figure 1). Our tool includes a large Zerodur (a low-expansion lithium-aluminosilicate glass-ceramic) plate that moves in one direction and an interferometer-controlled optical head that moves on a ceramic guide in the perpendicular direction. In addition, a green laser beam is used to scan back and forth across the mask and to thus build an image from the light that is reflected from the surface. The repeatability of the Zerodur stage and the optical head is better than 10nm at the three standard deviation (3σ) level for a Generation 6 (G6) mask, i.e., 800 × 920mm.3 However, no 2D instruments or sufficiently accurate physical artifacts are available to use as a calibration reference for this metrology tool. 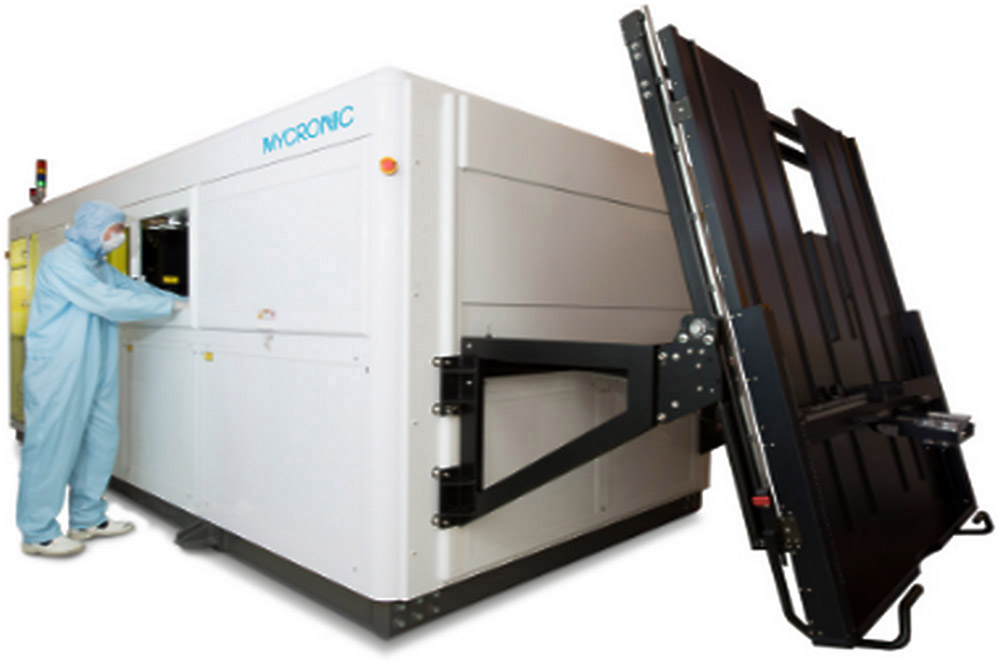 Figure 1. Photograph of the Prexision Mask Metrology System (Prexision-MMS) that can be used to measure the 2D (i.e., x–y) placement of photomasks up to the size of Generation 8 (1200 ×1620mm). The dark plate on the right is where the photomask is placed before it is loaded onto the Zerodur stage of the instrument.

In this work, we have therefore used a self-calibration method4 to assess the accuracy of the Prexision-MMS. In this self-calibration method, we measure a fused silica mask plate (with a matrix of crosses) several times as it is rotated and translated on the stage. Although the positions of the crosses are not known beforehand, after making several of these measurements, we can mathematically estimate the most likely errors of the stage, which can then be used to produce an error calculation map for the stage system (known as a ‘stage map’). To complete the self-calibration, we apply the stage map to the metrology tool, which is thereby corrected for all known errors. As another output, we are able to accurately calculate the actual coordinates of the crosses on the mask. To test the consistency of our tool we measured a G6 mask with crosses at angles of 0°, 90°, 180°, and 270°. The comparison of these results (see Figure 2) indicates that the total stage errors are 28–34nm (3σ). 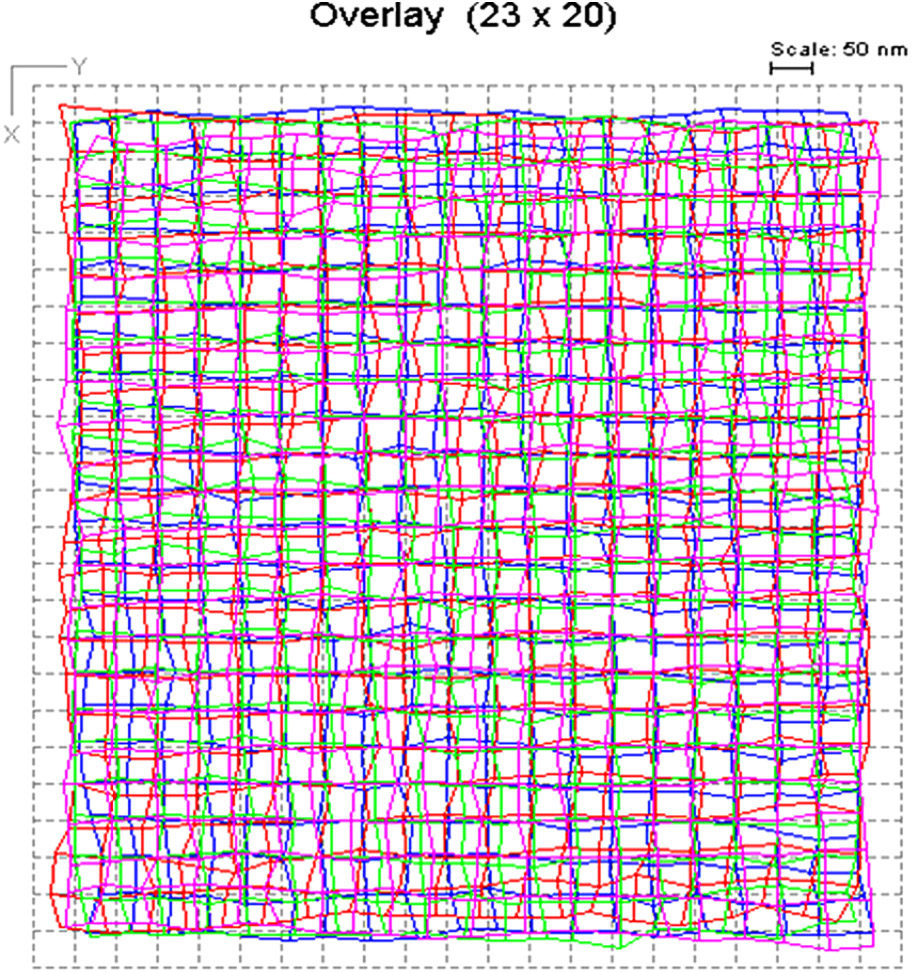 Most semiconductor masks are 152×152mm in size and are stiff enough to be supported kinematically (i.e., at three points). Larger area masks, however, are proportionally less stiff and deform easily. For instance, the non-flatness of the glass, the clamping forces, and the potential trapping of particles beneath the mask cause the mask to bend, which distorts the coordinate system. In our mask writers and metrology systems, we therefore include a feature (‘Z-correction’) to effectively remove the effect of distortion and mask bending. In this correction process, we measure the shape of the top surface of the mask and recalculate the coordinate system for a hypothetical flat top surface. In this way, we assume no a priori knowledge and we are able to handle all sources of the bending distortion. With the Z-correction, placement measurements are reproducible to a few tens of nanometers.

To experimentally verify the accuracy of our metrology tool, we used a G6 mask with an array of crosses to independently calibrate two Prexision-MMS instruments as described above. In each calibration procedure, we obtained a calibrated stage map for the system and a coordinate table for the crosses on the mask. We conducted the calibration of the first system in Sweden and then shipped the mask to Asia for the calibration of the second system. As shown in Figure 3, we find that the overlay error, the root mean square sum of the difference from calibrations, clamping errors, and measurement drift and noise, between the coordinates measured in the two systems was 22nm (3σ). We also conclude that none of the sources of errors are larger than 20nm (3σ). 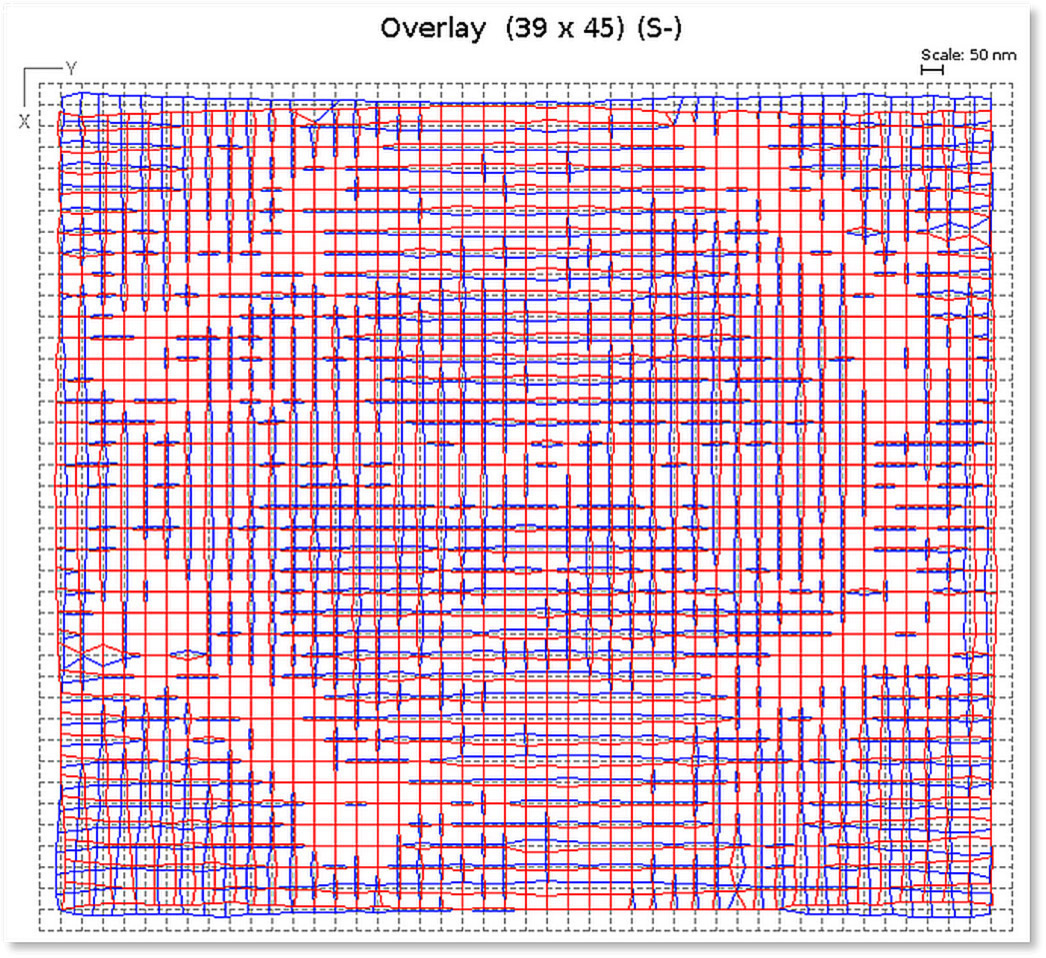 Figure 3. The overlay error (22nm at the three standard deviation level) between the measurements of a G6 photomask from two independently calibrated Prexision-MMS instruments.

From this single experiment it is not possible to numerically estimate the strength of our conclusions, but our results are in line with those from other experiments. Our results therefore indicate that the self-calibration method provides stable and accurate coordinate grids (differing by 25 × 10−9 at most), and that errors arising from shipping and clamping of the mask are within 25 × 10−9, or 25 parts per billion (ppb). When a mask with crosses is measured with one tool, the coordinate system of that tool is implicitly encoded in the coordinate data points. The mask with the table of coordinates can therefore be shipped for calibration of a second metrology system. The two metrology tools will have the same coordinate system once the second tool is adjusted to measure identical coordinates for the mask. Although individual calibrations give very consistent results, the method of matching the two systems, by using the same mask for calibration, provides even better overlay and less risk of unexpected errors.

In summary, we have used a self-calibration method to experimentally verify the accuracy of the Prexision-MMS. We used a G6 mask with an array of crosses to independently calibrate two separate Prexision-MMS instruments (one in Sweden and one in Asia). We obtained an overlay error of 22nm (3σ) and find that the errors arising from the shipping and clamping of the mask are less than 25ppb. Our results therefore show how it is possible to standardize coordinate systems at geographically separated locations (i.e., between tools, sites, and companies). Our approach could thus be used to benefit the flat panel display industry by reducing uncertainty, minimizing the need for reworking, and improving product performance and yields. We have only demonstrated accurate matching of 2D coordinate systems for photomasks, but our methods could also be used for other high-accuracy applications.

Tor Standstrom obtained his PhD in solid-state electronics from Chalmers University of Technology, Sweden, in 1982. Since then he has been working at the border of microelectronics and optics. For the last 20 years he has served as chief scientist at Mycronic. He is the author of numerous papers and patents.

John-Oscar Larson has an MS in electrical engineering from Chalmers University of Technology, Sweden. He has served in several expert, developer, and managerial roles within Mycronic's large-area writer program.

Peter Henriksson has an MSc from the Royal Institute of Technology (Sweden) and has held many roles, as a developer and manager, in Mycronic's large-area writer program.

Marcus Ekholm obtained his MSc from Chalmers University of Technology, Sweden. He now works on the development and installation of large-area mask writers.

Mikael Wahlsten has an MS in electrical engineering from Chalmers University of Technology, Sweden. He has held multiple positions as a developer, expert, and manager at Mycronic, and is currently the director for pattern generators. He is also the author of many papers and patents within the subject of pattern-generation technology.