A new and versatile method for integrating light-emitting nanoparticles, without loss of their unique properties, into glass is demonstrated.
08 November 2016
Jiangbo Zhao and Heike Ebendorff-Heidepriem

Light-emitting upconversion nanocrystals (UPNCs)—tiny particles studded with active lanthanide ions (Ln3+)—can convert IR excitation radiation into higher-energy emissions. Improved understanding and manipulation of upconversion properties at the nanoscale has recently fueled the development of new-generation UPNCs.1 These new-generation nanocrystals emit higher brightness upconversion through the use of high-irradiance excitation (which can unlock the previously inactive emitters).2 Alternatively, clustering ytterbium ion (Yb3+) sensitizers, in arrays at the sublattice level, are used to promote localized excited states.3 Furthermore, the UPNCs are promising for various applications, including biological sensing, anti-counterfeiting, photon energy management, and volumetric displays. The realization of many of those applications would be particularly helped if the new-generation UPNCs could be incorporated into glass. It remains a challenge, however, to infuse glass with UPNCs that have tailored nanophotonic properties.

The glass ceramic technique is the conventional integration approach for in situ growth of nanocrystals inside a glass.4, 5 In this technique, a glass, which contains precursor ions for the nanocrystals—see Figure 1(a)—is heated above the glass transition temperature to yield the crystal seeds. These seeds then undergo further growth, and thus form nanocrystals across the glass volume: see Figure 1(b). Although this in situ method is promising for certain nanocrystals, it runs into significant chemical and physical disadvantages when dealing with UPNCs. These disadvantages—related to production conditions, solubility restrictions, and post-annealing events—mean that the desired optical properties in hybrid glass are hard to achieve (and they can cause increased light scattering).6

To pursue high levels of compositional and structural control over UPNCs in glass, we have thus devised a versatile ‘direct doping’ approach6—see Figure 1(c)—as an alternative to the conventional glass ceramic technique. In our direct doping approach, as-synthesized nanoparticles are injected into the molten glass and are then integrated to create a highly controllable hybrid material.7, 8 With this technique, we advantageously combine the flexible selection of glass and sophisticated syntheses of unique nanocrystals. In this way, we can achieve far more control over the composition, concentration, and nanostructure of UPNCs in glass. 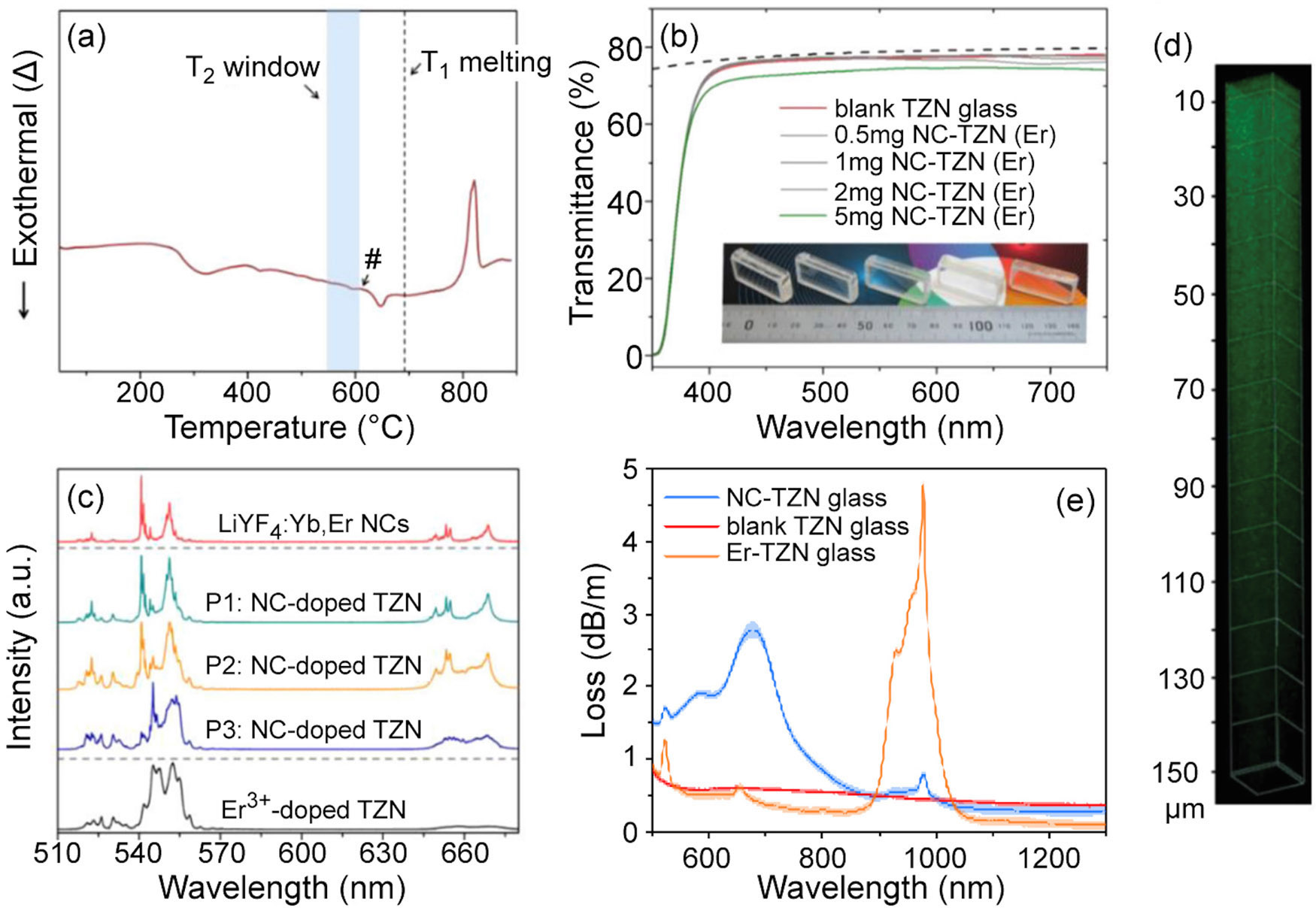 We thus used this optimum doping temperature and dwell time as the pre-set conditions to prepare a series of UPNC-doped TZN glasses. We find—see Figure 2(b)—that all of these samples exhibit high optical transmittance (very close to the maximum transmission of blank TZN glass). According to Rayleigh–Gans–Mie theory,9 we ascribe the negligible amount of light scattering in our glasses to their low-doping concentration (i.e., ≤170ppm w/w), the partial dissolution, and the absence of serious agglomerations of nanocrystals. Furthermore, we obtained almost identical x-ray diffraction patterns and Raman spectra from the blank TZN glass and our UPNC-doped TZN glasses, which suggests that our hybrid glasses retain the original glass network.

We have also used optical methods to thoroughly inspect our doped glasses. For example, we used the hypersensitivity of Er3+ emissions—Figure 2(c)—to validate the survival of the UPNCs in the glass and to quantify the dissolution fraction of the doped UPNCs as 30–60%. In addition, we used upconversion scanning confocal microscopy—see Figure 2(d)—to produce the first 3D in situ visualization of UPNC dispersion in glass. To obtain this volumetric 3D imagery and thus visualize the spatial distribution of UPNCs in TZN glass, we reconstructed 100 scanned x–y planes. We also acquired the light attenuation spectrum (between 500 and 1300nm) of the samples. We observe a loss of 0.28±0.06dB/m for a UPNC-doped TZN glass fiber. This value is intermediate to the loss from blank TZN (0.35±0.02dB/m) and from an Er3+-doped TZN (0.08±0.06dB/m) glass fiber: see Figure 2(e). These loss results indicate that dissolution of the nanocrystals has occurred and the absence of serious nanocrystal agglomerations in the TZN glass fibers.

In summary, we have used our direct doping approach to successfully integrate UPNCs (which have unique properties) in TZN glass fibers. We have thus demonstrated that this new methodology can be used to overcome key obstacles in the conventional glass ceramics technique. We now plan to use core-shell nanoparticles (which are surrounded by an additional robust layer of material) to ensure that the nanoparticles remain intact and are better dispersed within the glass. We will also generalize our direct doping approach so that it can be used to embed other nanoparticles (with interesting photonic, electronic, and magnetic properties) in glass and to thus advance smart glass technology for a wealth of applications, e.g., in biomedical engineering, remote radiation sensing, and 3D volumetric displays.

We thank colleagues and collaborators at Macquarie University and the University of Melbourne (Australia) for their contribution to this work. We also gratefully acknowledge financial support from the Australian Research Council (grants DP130102494 and CE140100003), as well as from the Commonwealth and South Australia State Government (funding for the OptoFab node of the Australian National Fabrication Facility).

Jiangbo (Tim) Zhao is an associate investigator at the Australian Research Council (ARC) Centre of Excellence in Nanoscale Biophotonics and a research associate at the University of Adelaide. He holds a PhD from Macquarie University, Australia. His research interests lie in the interdisciplinary area of photonics, materials, and biomedical science, and are focused on light–matter interactions, luminescence in solid-state and nanoscale structures, and photonics-based devices for practical applications.

Heike Ebendorff-Heidepriem received her PhD in chemistry from the University of Jena, Germany, in 1994. She subsequently held two prestigious fellowships and received the Weyl International Glass Science Award. Between 2001 and 2004 she worked at the Optoelectronics Research Centre at the University of Southampton, UK, and she has been at the University of Adelaide since 2005. She is currently one of the leaders of the Optical Materials and Structures Theme and is the deputy director of the Institute for Photonics and Advanced Sensing. She is also a senior investigator of the ARC Centre of Excellence in Nanoscale Biophotonics. Her research is focused on the development of novel optical glasses, fibers, surface functionalization, and sensing approaches.