Monitoring of dust on Mars is interesting from a number of viewpoints, e.g., in terms of physics, geometry, and planetary meteorology. To date, several different systems have been used to monitor the martian atmosphere. For example, Mars-orbit satellites and Mars rovers have provided important information regarding atmospheric and dust conditions.1 Of particular interest, because of their influence on the martian climate, are so-called ‘dust devils’ (strong and well-formed whirlwinds). These are well-known on Earth, but have also been observed on Mars (e.g., by NASA's Opportunity and Mars Pathfinder rovers).2 Although the size and motion of the observed martian dust devils can be estimated from camera images (obtained from rovers or satellites), the quantitative information necessary for making these estimates is poorly constrained.3 Accurate, quantitative, in situ measurements of atmospheric and dust activity on Mars would therefore be very useful in the study of this interesting phenomenon.

It is thought that lidar (light detection and ranging) is a promising technique for making surface measurements of surface dust activity on Mars, and therefore for making more quantitative characterizations of dust devils. In the lidar technique, pulses of laser light are emitted from the instrument and the light that is backscattered from a given target is measured as a function of time. This time-resolved signal can then be converted to quantify the distance to the target. Although a lidar instrument has previously been used for an in situ Mars investigation (i.e., for NASA's Phoenix mission4, 5), the system was large and required a substantial amount of power to operate the laser. That instrument design is therefore unsuitable for use on a planetary rover.

With the aim of obtaining additional information about dust devils and atmospheric activity on Mars, we have started to develop a mini-lidar system that would be suitable for a future Mars rover.6 In particular, we hope to focus on studying the near-ground atmosphere with our instrument. In our development work so far, we have built a 10cm3 instrument that is powered by a 385nm LED (produced by Nichia Corporation). We selected this particular LED light source because of its robustness to gravitational changes and the physical shock experienced during rocket launch (such LEDs have previously been used for indicators, lighting, and other purposes on spacecraft7). In our mini-lidar design, we use a pulsed power and pulse-repetition frequency for the LED beam of 0.75W (7.5nJ/10ns) and 500kHz, respectively. This power is quite low compared with traditional lidar systems, e.g., the Micro Pulse Lidar (MPL)8 system fires a pulse beam at a power of a few tens of μJ. Furthermore, our LED lidar transmits a pulse intensity of 1/10,000, which is 100 times greater than with MPL.9

Our instrument also features a specially designed Cassegrain telescope (with a shorter barrel than in normal designs). With this receiver, we can measure the lidar count rate from dust echoes and thus determine dust characteristics. We set the field of view of this receiver to be 3mrad, and our transmitter has a spread angle of >60mrad (the receiver therefore does not cover all of the illuminated area). We have also designed our instrument to have robust optics, i.e., the optical setup is resistant to physical shock. We use a novel high-speed photon counter (commercialized by Trimatiz Ltd) for the detection of the echoes (i.e., weak, discrete photons) because standard photon counters are unsuitable for the high repetition frequency of our LED. This photon counter measures the echoes over a series of bins to improve the spatial resolution to 0.15m (for a 1ns bin width), and it can be used up to a pulse repetition rate of about 1MHz.

We have conducted a series of ground experiments at the large wind tunnel facility of the Japan Meteorological Agency (in Tsukuba, Japan) to demonstrate our mini-lidar instrument. For this testing, we used a simple arrangement of the system. For example, we did not fix the transmitter optics within the receiver's aperture. Instead, we placed them in the shoulder of the instrument with an angle adjuster (see Figure 1). In this way, we could easily control the overlap distance between the transmitter beam and the receiver's optical axis. We also put the optical system onto a tracker so that we could set the observation direction. For our experiments, we used the smoke of glycerin as the measurement target and we set the smoke to flow in the wind tunnel (15m ahead of the instrument) at a wind speed of 0–5m/s. We placed our instrument downwind, at a height of 1m, and used it to obtain synchronized lidar measurements of the dust and particles in the wind flow. By measuring the change in echo counts, we could thus characterize the diffusion and convection characteristics of the smoke. 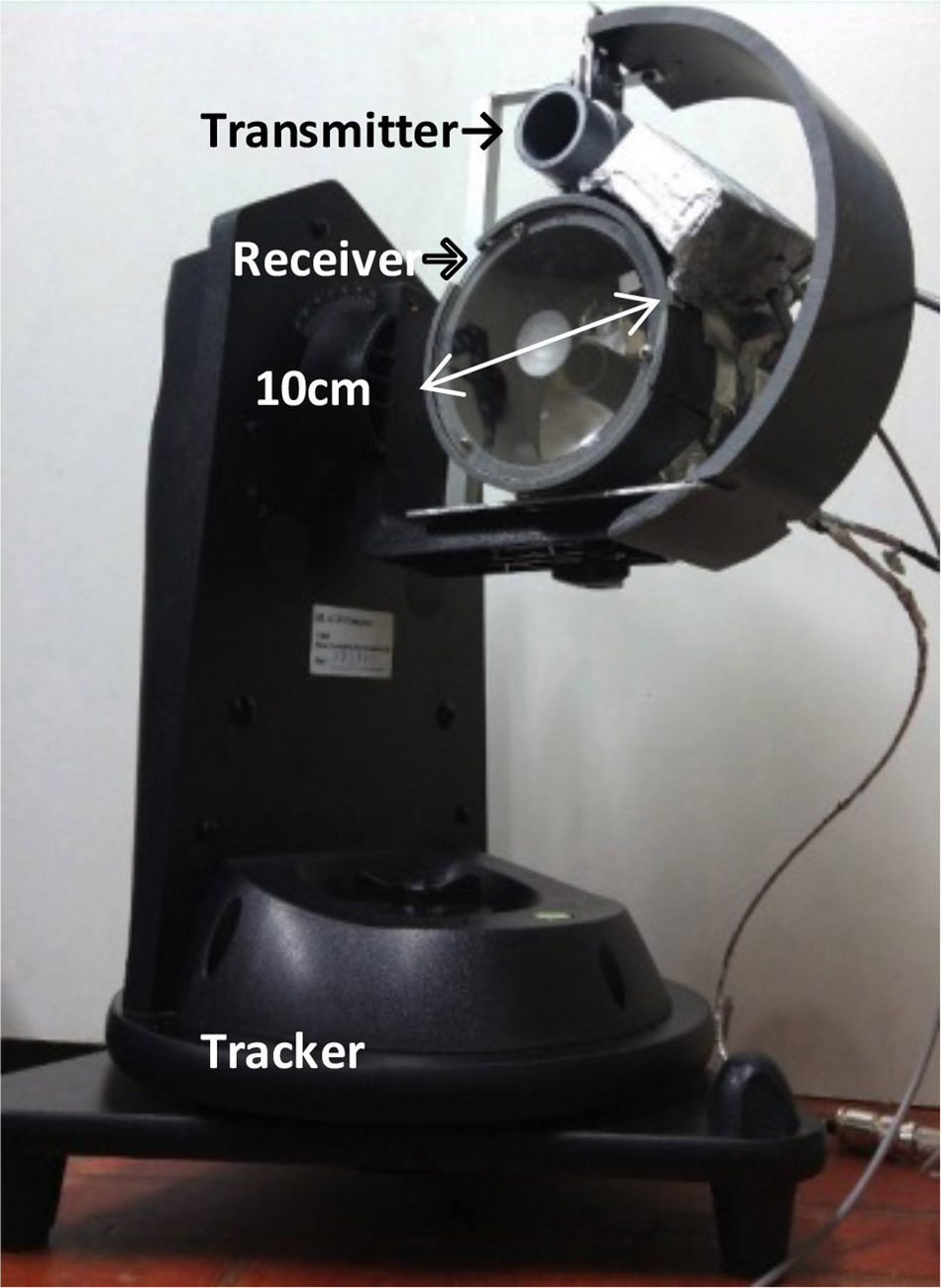 Figure 1. Photograph of the LED-powered mini-lidar system used in the wind-tunnel ground experiments. The system consists of a 10cm3 lidar, a Cassegrain telescope as the receiver, and a transmitter. In this setup the transmitter optics are set on the shoulder of the instrument. The whole system is placed on a tracker to control the observation direction during the experiments.

A smoke echo image we obtained during our LED mini-lidar experiments is shown in Figure 2 (for a flow speed of 0.3m/s in the downwind direction). From these results we observe that the smoke began to rise at a distance of about 15m from the instrument. The subsequent weaker echo intensity (at a distance of 12–6m) was caused by diffusion and convection of the smoke. We then detected a strong echo intensity again at a distance of a few meters. We find that the smoke had a convection period of about 40s, moving about 2m (up and down) over the 12m propagation distance. We also estimate that the upward convection speed was 0.04m/s, which is indicative of the diffusion speed. Our measurements of smoke at a wind speed of 0.5m/s were three times stronger than those shown in Figure 2. This means that diffusion of the smoke at 0.3m/s would be 1.7 times wider under the same propagation conditions. In these experiments we kept the signal-to-noise ratio at a high level (>10), but we also examined the influence of background light on the lidar measurements. 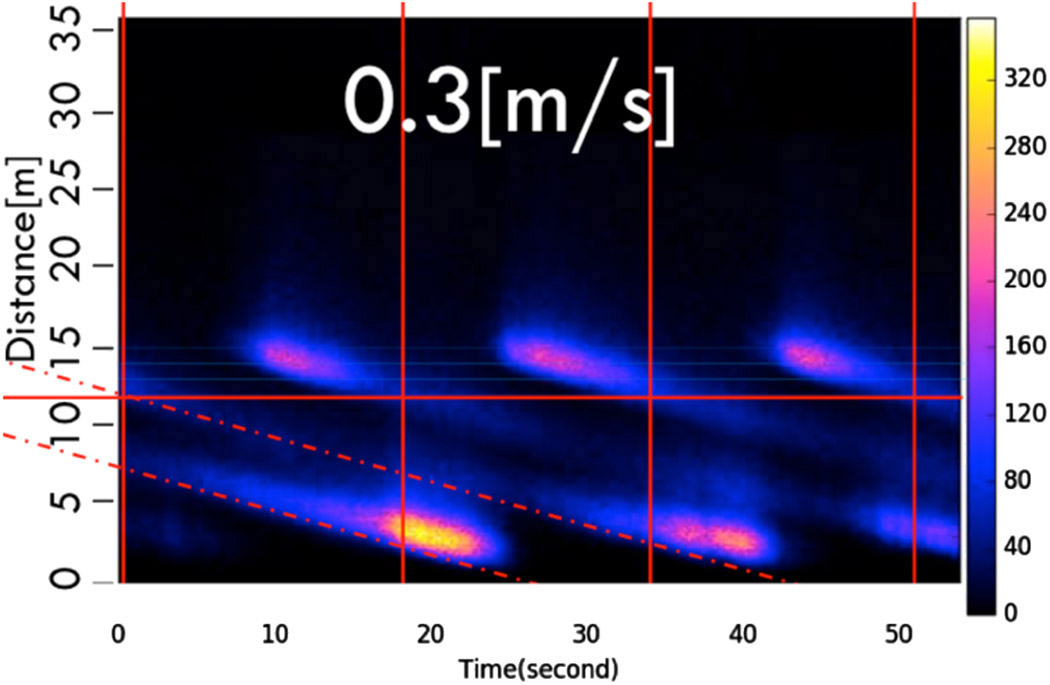 Figure 2. Smoke echo image obtained during the wind-tunnel experiments. These results are for a test where the flow speed was 0.3m/s in the downwind direction. The intensity results are shown in terms of distance from the lidar instrument and elapsed time. The horizontal solid line marks the initial point of convection, the vertical solid lines indicate different time periods, and the dashed lines denote the direction of smoke flow.

In summary, we have developed a novel, LED-powered mini-lidar system specifically for studying near-ground atmospheric and dust conditions from a Mars rover. We have also conducted wind-tunnel experiments and have thus verified our instrument design. With our approach, we can quantitatively estimate smoke diffusion and convection separately. In addition, our experimental results demonstrate that it is possible to investigate the structure of a dust devil that is bigger than 2m and has a speed of >0.3m/s. In the next step of our work we will estimate the likely daytime background lighting conditions on Mars. We will then conduct ground experiments with our system under such simulated lighting conditions.

Tatsuo Shiina received his BE, ME, and DE in engineering from the Science University of Tokyo, Japan, and is currently an associate professor. He studies near-range compact lidar for dust and gas detection.