In radiant heat exchange, electromagnetic energy is radiated from a warm body to a cooler one.1–3 This kind of heat exchange can, for example, power a thermophotovoltaic cell. A ‘blackbody’—a structure that absorbs and emits optical rays with perfect efficiency—is the thermodynamic ideal of such a radiator. According to the canonical Stefan–Boltzmann law, which arises from the blackbody concept, the thermal radiation emanating from any large body is limited. The law also describes the maximum radiative-energy exchange rate between bodies that are separated by macroscopic distances. As the separation between the bodies shrinks to microscopic distances, however, the concept of a blackbody loses meaning, i.e., light can no longer be treated as a bundle of rays that intersect/bypass a scattering body.

It was recognized half a century ago that the macroscopic blackbody limit can be surpassed in the closely spaced near-field regime by bodies that exchange ‘frustrated’ evanescent energy (at a level far beyond the exchange of radiating waves).4 However, in that analysis, as well as in more recent extensions of blackbody-like limits to the near-field regime,5, 6 highly symmetric structures—for which the evanescent states can be ‘counted’ a priori—are required. This approach has limited generality and thus an important question remains: what is the maximum possible radiative heat transfer rate in the near-field regime?

In our work,7 we have therefore developed a new approach8 to answer this outstanding question. Through our method we obtain upper bounds for the radiative heat transfer rate that depend only on the material properties and separation distance of the bodies, and that are otherwise independent of structural details. To avoid the difficulty of counting evanescent waves, we instead focus on the total stored energy of the evanescent field near the emitter (which is finite at non-zero separations). We also combine this alternate perspective with energy-conservation insight that we recently gained9 for general wave-scattering problems (i.e., we discovered the currents that can be excited in a lossy/emissive medium are limited by a particular formulation of the optical theorem10) and thus yield the new upper bounds that apply to generic near-field radiative heat transfer.

The difference between the far-field-blackbody and the near-field heat transfer cases are depicted schematically in Figure 1. The far-field energy exchange is limited by the optical scattering properties of each individual body in isolation, and is bounded by the heat that radiates from the hot body at a rate of σT4A (where σ is the Stefan–Boltzmann constant, T is the temperature of the hot body, and A is the surface area). In contrast, for the near-field case, a significant evanescent-wave intensity can build up between the bodies when they are close enough. This leads to our newly formulated bound,8 which depends (for all frequencies) only on the temperatures, separation distance (d), and material susceptibilities (χ) of the two bodies. For simplicity, in both cases, we take the temperatures of the hot and cold body to be T and zero, respectively, but it is easy to extend our approach to two non-zero temperatures. For a suitable bandwidth that commonly describes resonant plasmonic interactions, we can integrate our spectral bound to yield the near-field expression shown in Figure 1. This result is proportional to the far-field blackbody expression, but has an additional near-field enhancement factor, i.e. (λT/d)2, where λT is the peak emission wavelength of the thermal emitter. Our near-field expression also includes a material enhancement factor—|χ3|/Imχ (where Im denotes the imaginary component)—which corresponds to the potential for field amplification (as seen in plasmonic resonators11, 12). 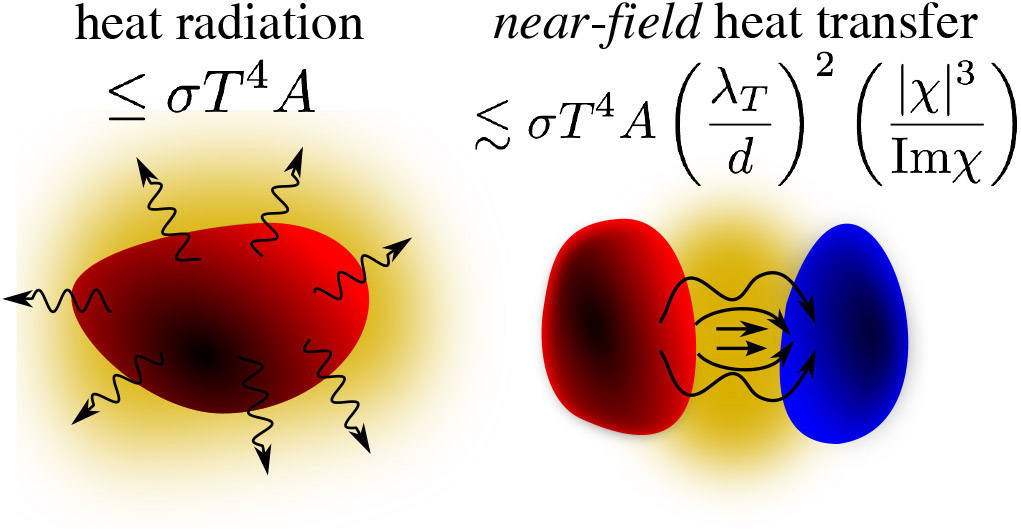 Figure 1. Schematic illustration of the different principles underlying exchange of thermal radiation—i.e., from a hot (red) to cold (blue) body—in the far-field (left) and near-field (right) regimes. Far-field radiative heat transfer between large bodies is limited by blackbody physics, for which the absorption/emission properties of each body in isolation determine the energy transfer rate. The upper bound for the transfer rate is given by the expression σT4A, where σ is the Stefan–Boltzmann constant, T is the temperature of the hot body, and A is the surface area. In contrast, near-field heat transfer is determined by the absorption/emission properties of the bodies in tandem. In the new formulation for this case, the maximum transfer rate at any frequency is the far-field rate scaled by near-field and material-enhancement factors. The expression for the near-field heat transfer shows the bound integrated over a bandwidth relevant to metallic resonators, where λT is the peak emission wavelength of the thermal emitter, d is the separation distance between the bodies, and χ is the material susceptibility of the bodies. Im: Imaginary component.

In general, bounds serve to identify the fundamental limiting processes of a system. They can also be used to provide design goals that drive innovation within a field. A key question with respect to the latter is whether our bounds can be reached through careful design of the emitter and absorber. In our study, we find that our bounds can be reached within a factor of two—see Figure 2(a)—when one of the bodies is small enough to be dipolar. For radiative heat transfer between two large-area bodies, however, we find—see Figure 2(b)—that commonly used high-symmetry structures fall far short of the bounds. We believe that this shortcoming arises from a type of destructive interference between the near-field waves, which is manifest in the repulsion between the surface waves bound to each surface, as their separation is reduced. New designs that approach the bounds could thus offer two orders of magnitude improvement over planar systems, with significant potential for energy applications. 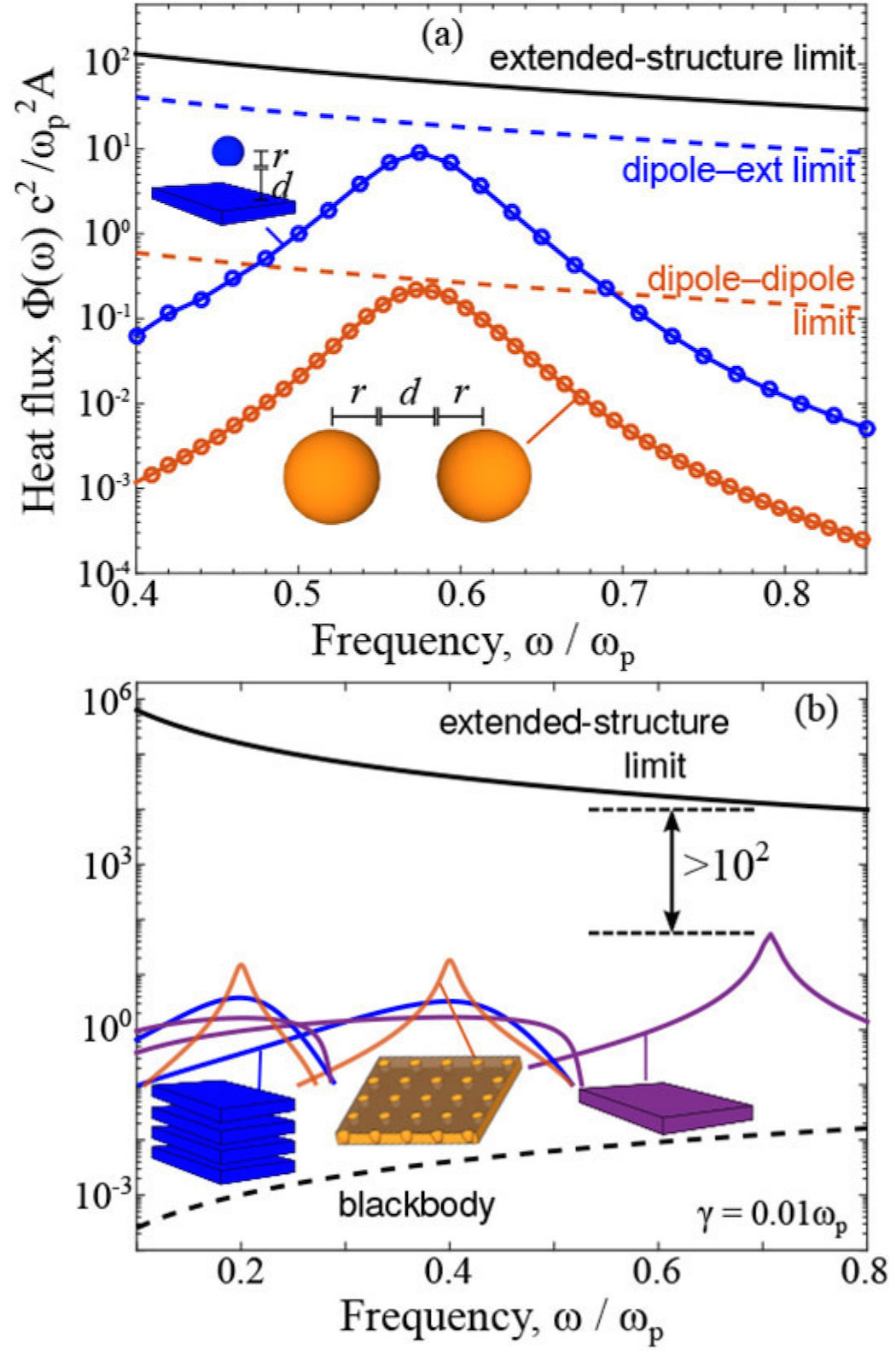 Figure 2. Computations of radiative heat transfer in common systems, compared with material- and separation-dictated upper bounds (limits).8 (a) Sphere–sphere (orange) and sphere–plate (blue) systems, near their plasmonic resonant frequencies, can approach their respective bounds within a factor of two, and thus serve as examples of ideal near-field radiative-energy exchange. r: Radius of sphere. ω: Frequency. ωp: Plasma frequency. c: Speed of light. (b) Typical large-area high-symmetry structures, e.g., various metamaterials and thin films, fall far short of the general limits because of destructive-interference effects that arise as the structures approach each other. γ: Damping rate of a standard Drude material model.

In summary, we have devised a new method to calculate the maximum possible radiative heat transfer rate in the new-field regime. In our new formulation, the upper bound is obtained (for any frequency) by scaling the maximum far-field transfer rate by near-field and material-enhancement factors. The difference between our newly developed bounds and current large-area approaches suggests that there is room for significant future design improvements. Indeed, thermophotovoltaic cells (i.e., which convert heat energy to electromagnetic radiation, tailored to the optimal spectral response of a photovoltaic cell) offer a promising application of such advances, where increased radiation rates could lower the operational temperatures and improve the energy–conversion efficiency.13 It has only recently become possible to calculate radiative heat transfer between non-planar bodies14–17 (and experimental tests are similarly recent18, 19), but the promise of potential improvement by using suitably patterned surfaces may provide the necessary impetus for further computational, theoretical, and experimental studies with the aim of ultimately achieving an ideal near-field thermal radiator. Our aim is to use computational tools to probe the large, mostly unexplored design space and to find structures that converge to the theoretical limits.

Owen Miller and Steven Johnson were supported by the US Army Research Office, through the Institute for Soldier Nanotechnologies (contract W911NF-07-D0004), and by the US Air Force Office of Scientific Research Multidisciplinary Research Program of the University Research Initiative (FA9550-09-1-0704). Alejandro Rodriguez was supported by the National Science Foundation (grant DMR-1454836).