The ever-increasing threat of terrorist attacks means screening technologies that are more advanced than common metal detectors are required at security checkpoints. Current imaging systems—working in the millimeter wave (mmW) range—have been proven to offer good results in the detection of metallic and non-metallic threats (e.g., explosives, ceramic knives, or self-made bomb precursors). During the screening process for these systems, however, passengers (i.e., at airports) must adopt a specific position and posture,1–3 or they must move in a specific way in front of the scanner.4 Furthermore, it is desirable for future screening systems to simultaneously offer a higher throughput and detection performance.

High throughput and detection performance can both be achieved with a so-called walk-through system (WTS), which is used to screen a person as they pass the scanner. On one hand, this setup is more pleasant for passengers because no specific posture has to be adopted (which also means queues can be avoided in most cases). On the other hand, however, the detection performance of such systems could be enhanced. This is because a number of different snapshots, from different angles of view, are required to realize the full illumination necessary to scan a person. Each part of the body therefore has to be screened at least once. If a WTS were also to offer a high frame rate, tracking of potential threats would thus be possible (i.e., by improving the detection rate and reducing the number of false alarms).

In our work,5 we have investigated the concept of a WTS that is based on an already-existing fully electronic mmW scanner.3 This device, which does not include any moving mechanical parts, is known as the Quick Personnel Security (QPS) scanner and is shown in Figure 1(a). The QPS system, which works across a frequency range of 70–80GHz, consists of 3008 transmit and 3008 receive antennas that are distributed over an aperture of 1 × 2m. This large aperture, and the 75GHz center frequency, mean that the system has a high spatial resolution (2 × 2 × 10mm). Data acquisition with the QPS takes less than 20ms,1 and 3D images with optimum spatial resolution are generated through digital focusing (which is implemented with field programmable gate arrays). More detailed descriptions of the system have previously been published.1, 6

Figure 1. (a) The Quick Personnel Security (QPS200) scanner system consists of two panels that enable simultaneous scanning of a person's front and back. Both panels work separately and are not synchronized. (b) Proposed walk-through system (WTS) based on the QPS200. In this version, both panels are synchronized.

A sketch of our proposed WTS concept is shown in Figure 1(b). The basis for our design is to synchronize both panels of the existing scanner system and to reuse the mmW components to achieve a real-time imaging capability. Our scanner would be of great benefit to airports since currently installed systems can be updated to the WTS version, without requiring any change in the layout of the security lanes.

For screening with our WTS, the passenger walks between the two synchronized panels and three snapshot measurements are acquired (see Figure 2). From these three snapshots we obtain scans of the person's front, sides, and back. This is the minimum number of snapshots that are required to provide full-body illumination (as verified by the ray-tracing simulations shown in Figure 3). Some areas of the body (shown in green) are illuminated by transmission measurements from both scanners, whereas other areas (blue or yellow) are illuminated by separate reflection measurements from each scanner.

We have also demonstrated the expected imaging capability of our scanner by using an experimental system (see Figure 4). Our experimental apparatus consists of two synchronized antenna arrays that are separated by a distance of 1.5m. Each array contains 1504 transmit and receive antennas, distributed over an area of 1m2. The image quality we can obtain through the first/third snapshots is illustrated in Figure 5(a). In this scan a hidden ceramic knife on the back of a person is clearly visible. In addition, we show the scan result from the second snapshot in Figure 5(b). In this case, the person was hiding a surrogate for an explosive on their left side, which can be seen in the image. Our successful experimental results therefore verify the potential of our full-body illumination approach. Indeed, when a passenger adopts the optimal posture, this full-body illumination could lead to increased detection rates. In addition, multiple imaging frames could be obtained when people are scanned in arbitrary postures to compensate for shadowing of extremities. This would also allow potential threats to be tracked through several frames. 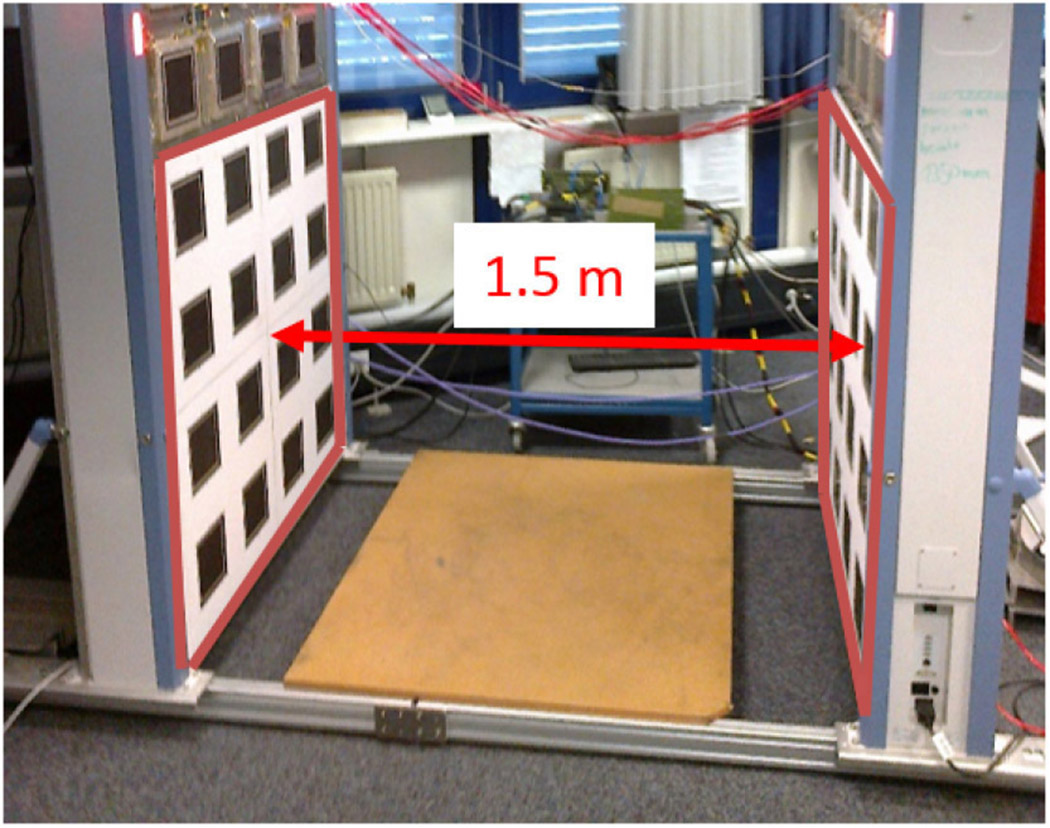 Figure 4. Photograph of the experimental scanner used to demonstrate the imaging capability of the full WTS. Two arrays of 1504 transmit and receiver antennas (over an area of 1m2) are separated by a distance of 1.5m and are highlighted in red.

Figure 5. Scans obtained during the experimental demonstration of the WTS. (a) The result of the third snapshot clearly shows a ceramic knife hidden on a person's back. (b) A surrogate for an explosive can be seen on a person's left side in an image from the second snapshot.

In summary, we have investigated a new walk-through scanning system concept for security applications. Our WTS is based on existing millimeter-wave technology and consists of two synchronized arrays of transmit/receive antennas. We have demonstrated that three snapshots is the minimum number required to achieve full-body illumination. We have also conducted an experimental demonstration of our system to illustrate its imaging capabilities. Our proposed system has several benefits, including the reuse of current mmW technology. It should also be possible to implement our WTS by simply updating currently installed scanners. In addition, the full-body illumination of our approach means that we can realize better detection performance, with less annoyance to passengers. In the next step of our work we will investigate the visibility of several objects fixed to different parts of the human body. For these tests, we will use two synchronized panels in our system.

Frank Gumbmann has been a research and development engineer in the Microwave Imaging Department since 2012. Between 2005 and 2012 he was the Chair for Microwave Engineering and High-Frequency Technology at the University of Erlangen-Nuremberg, Germany.