The solar paradigm of creating singular nanomaterials that possess unprecedented photonic, tribological, electronic, and catalytic properties is arguably far less familiar than the energy-saving paradigms of solar photovoltaics and solar thermal systems. Much of the research in this field has evolved over the past decade from our collaborations (i.e., between researchers at Ben-Gurion University of the Negev and the Weizmann Institute of Science, Israel).

Although the first fullerenes (hollow closed-cage nanostructures) and nanotubes were made from pure carbon, in the 1990s it was realized that a rich landscape of inorganic candidates—made from compounds that possess comparably layered crystal structures (see Figure 1)—should also exist.1 These compounds have strong covalent bonds within the plane, and weak interplane van der Waals forces that become relatively insignificant at high temperature (where thermal fluctuations can shear, bend, and fold molecular sheets into fullerene-like and tubular nanostructures).1 The first non-carbon success stories were tungsten disulfide (WS2) and molybdenum disulfide (MoS2), produced via pulsed-laser ablation and high-temperature chemistry in conventional ovens.1 Finding high-yield practical methods for the synthesis of these inorganic nanostructures, however, is a difficult challenge. Also, the previous feats notwithstanding, an array of intriguing theoretically predicted nanomaterials could not be realized experimentally, and assorted nanostructures, which would subsequently be discovered, remained undetected. 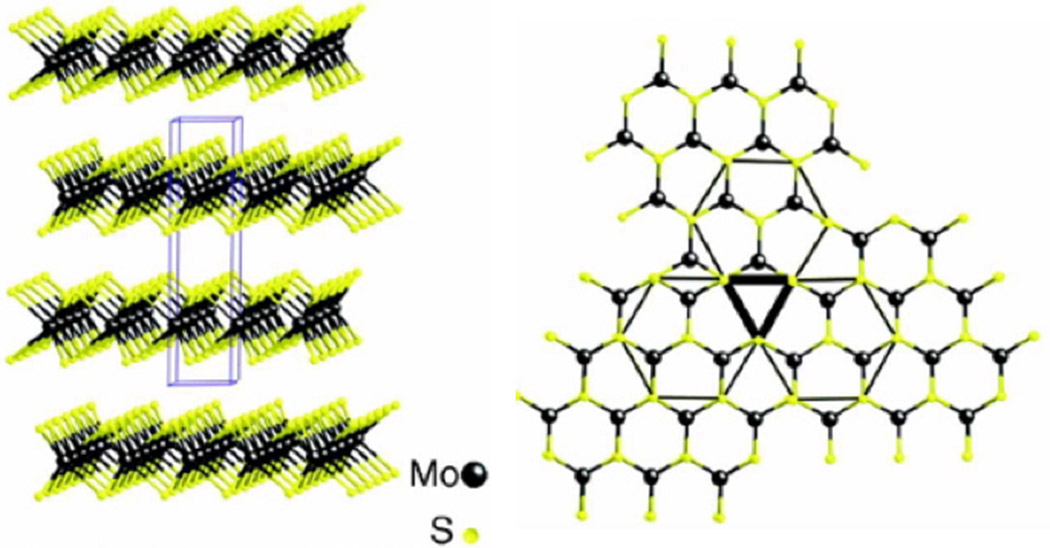 Figure 1. Schematic diagram of the layered crystal structure of molybdenum disulfide (MoS2). The same structure is also pertinent to a variety of other metal-dichalcogenide compounds. In bulk form, the Mo and S atoms have sixfold and threefold coordination, respectively. In their nanoclusters, however, they have only fourfold (Mo) and twofold (S) coordination. This causes the planar configuration to destabilize, and it favors the formation of hollow closed-cage and tubular nanostructures.

Our approach is to use immensely concentrated sunlight to create unique extreme reactor conditions that can yield nanoparticles that could not otherwise be produced, or that could only be obtained with considerable difficulty. The key to our approach is producing a combination of very high reactor temperatures and extensive sharp-gradient ultrahot annealing environments. We have attained temperatures approaching ∼3000K, at target irradiance values of thousands to tens of thousands of suns (one ‘sun’ denotes the irradiance of typical peak terrestrial solar beam radiation, i.e., 1mW/mm2). The target's affiliated thermal radiation emission naturally creates the photonically hot annealing region that is conducive to nanostructure formation. The fact that reactant temperatures approached 3000K was evidenced by accompanying phase transitions, such as the sublimation of graphite and the vaporization of molybdenum. Our experiments show that irradiation times of only a few minutes are sufficient (considerably more rapid than alternative methods) to achieve the desired nanomaterials.2–7

Our three generations of solar furnaces are summarized in Figure 2. These furnaces have evolved to progressively higher flux densities, and from an initially diverging concentrator to converging concentrators. In all cases, solar beam radiation is reflected by an outdoor, flat, dual-axis tracking heliostat into an indoor laboratory where stationary concentrators focus the radiation into quartz-ampoule reactors, and where studies can be conducted under controlled conditions. Our first solar furnace—see Figure 2(a)—comprised a Cassegrain telescope with a primary paraboloidal mirror (200mm in diameter). With this design, the solar disc is imaged into a high-transmissivity, high-numerical-aperture (NA of 0.66) quartz-core optical fiber that transports concentrated sunlight indoors, where the nanomaterial syntheses are performed.2–4 For our second solar furnace—see Figure 2(b)—we used a paraboloidal primary mirror and an ellipsoidal secondary mirror to realize a 15,000-sun Gregorian telescope (capable of delivering ∼105W onto a focal spot of ∼7mm2).5–7 Our latest solar furnace—see Figure 2(c)—is a 30,000-sun dual-mirror aplanat (an aplanat is an imaging design that completely eliminates both spherical aberrations and coma) that can deliver ∼150W onto a focal spot of ∼5mm2.6 In this case, the diameter of the primary mirror is 536mm and the target numerical aperture is 0.98. Accounting for all optical losses, this solar furnace reaches a target irradiance of 30,000 suns (30W/mm2), which is close to the thermodynamic limit (in air) for solar concentration (given the properties of manufacturable components and the accuracy of solar trackers). 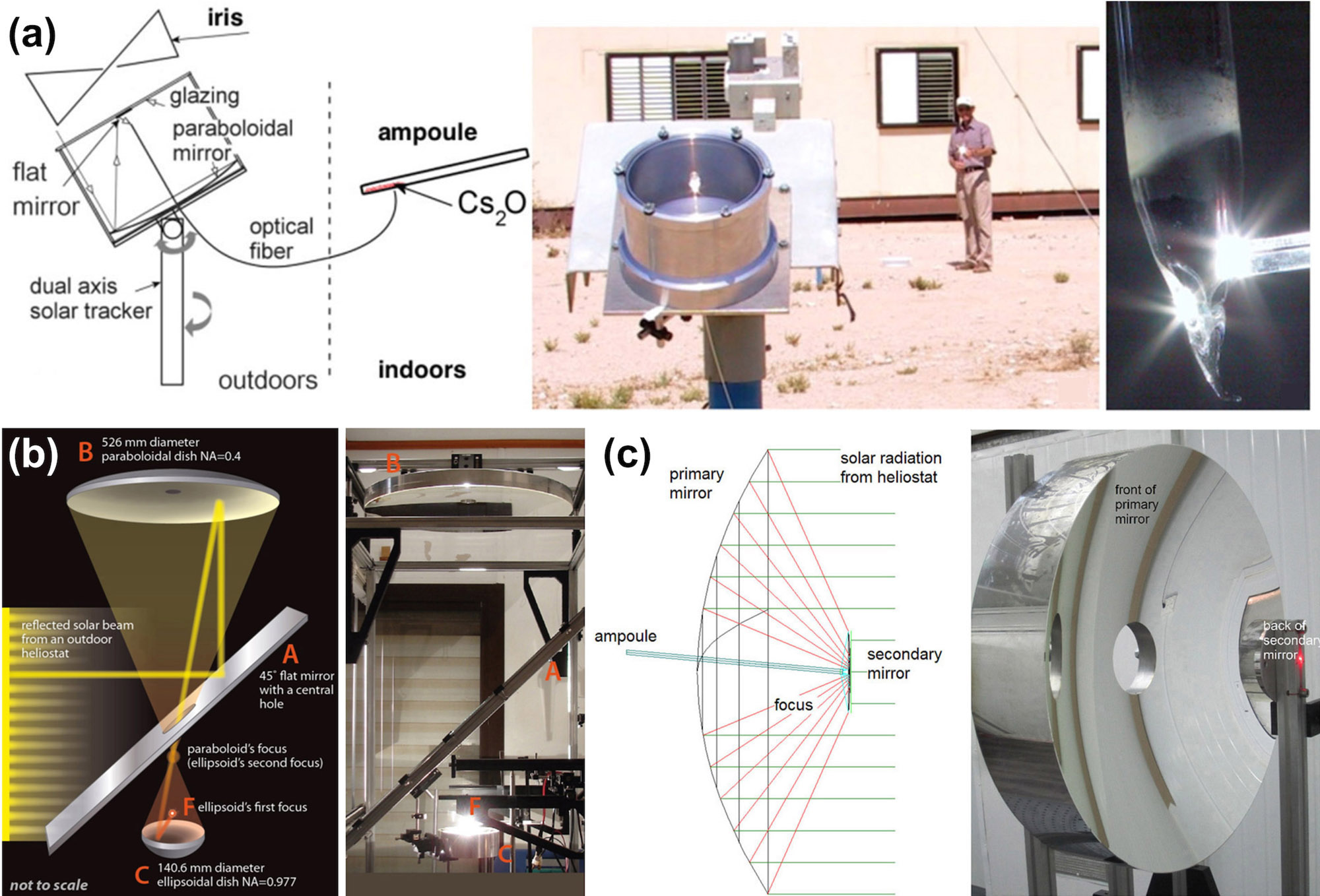 Figure 2. Three generations of solar furnaces. (a) Schematic diagram (left) of the first-generation furnace, which consists of a Cassegrain telescope with a primary paraboloidal mirror (200mm in diameter). The solar disc is imaged onto a high-transmissivity, high-numerical-aperture quartz-core optical fiber that transports the concentrated sunlight indoors for nanomaterial synthesis.2–4 Cs2O: Cesium oxide. Photograph in the center shows the distal end of a 20m-long optical fiber pointed at the camera before being threaded into the laboratory. Right: Irradiation of a precursor powder, via the envelope of an evacuated quartz ampoule (photographed with a neutral-density filter). Although the irradiance at the distal fiber tip reaches ∼10,000 suns, it is reduced to ∼4000 suns because of the inherent power-density dilution. (b) Schematic diagram (left) and photograph (right) of the second solar furnace. This is a 15,000-sun Gregorian telescope, i.e., a paraboloidal primary mirror and an ellipsoidal secondary mirror, that delivers ∼105W onto a focal spot of ∼7mm2.5–7 (c) Schematic diagram (left) and photograph (right) of the latest furnace. This is a 30,000-sun dual-mirror aplanat that delivers ∼150W onto a focal spot of ∼5mm2.6 The primary mirror has a diameter of 536mm, and the target numerical aperture is 0.98. The red laser beam at the back of the secondary mirror is used for alignment.

Several singular nanostructures that we have produced with our solar furnaces are highlighted in Figures 3 and 4. For example, we show—see Figure 3(a–c)—transmission electron microscope (TEM) images of fullerene-like cesium oxide (Cs2O) nanostructures that we produced with the solar fiber-optic mini-dish concentrator shown in Figure 2(a). Cs2O is used to moderate the work function of optical coatings in photodetectors and photoemitters, but this material is subject to violent reactions in air. In contrast, our closed-cage nanostructures remain stable for weeks. We have also used our solar ablation technique to produce multiwalled MoS2 nanotubes (known for their super-lubricant value), as shown in Figure 3(d) and (e). With this approach, it was originally just our aim to confirm our ability to reproduce earlier seminal nanomaterial syntheses.1 From the same solar ablation experiments, however, we also produced the first-ever single-walled MoS2 nanotubes (and thus confirmed the fundamental lower size limit for such nanostructures).3, 4 We also show TEM images of silicon (Si) nanowires, generated at high yields via solar ablation, in Figure 3(f).3,4 These nanowires develop a thin passivating film of SiO2 when they are exposed to air. Although such Si nanostructures had been previously synthesized, our work was the first time they were realized from a pure SiO2 precursor, and without toxic chemistry and long reaction times. 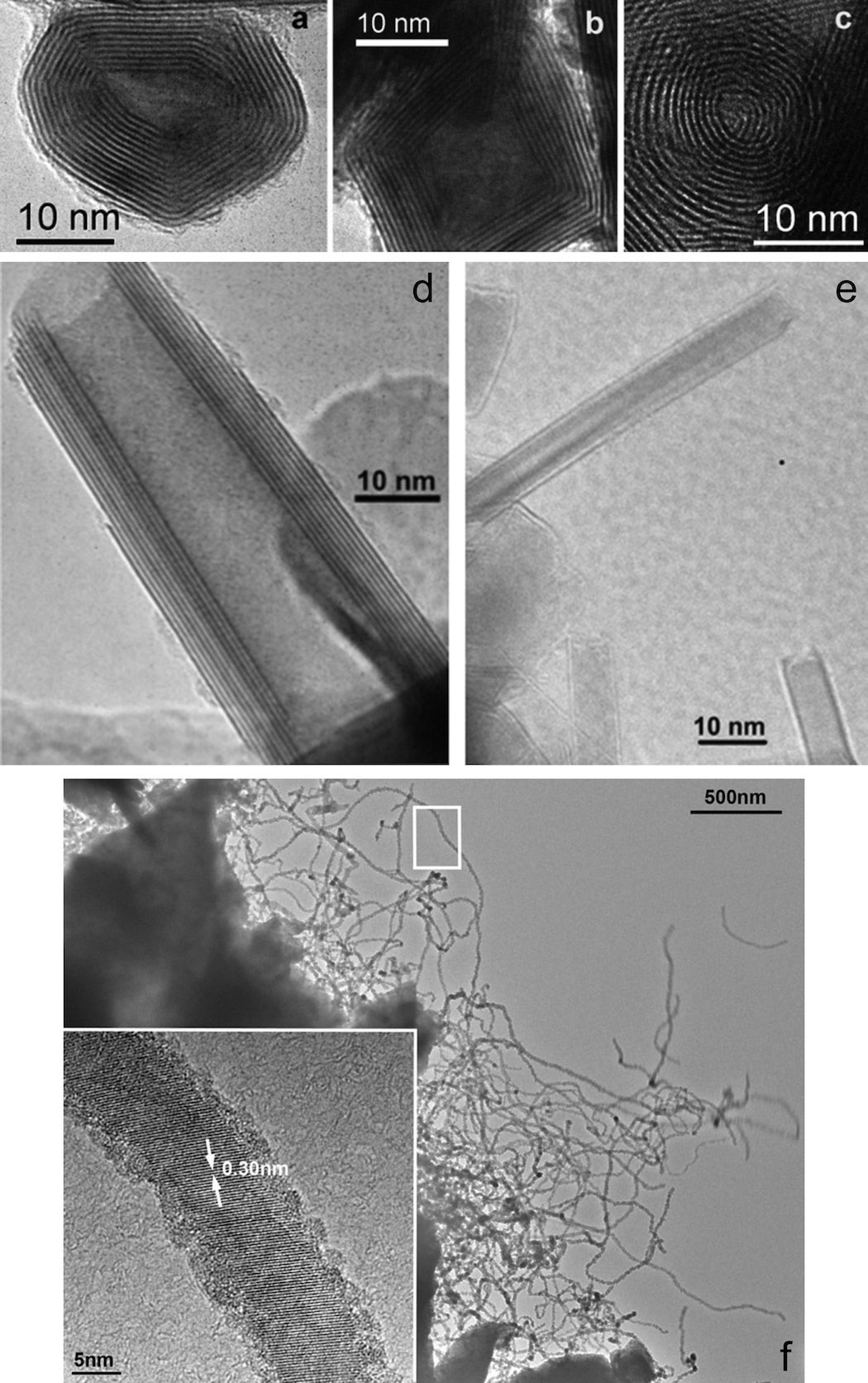 A high-resolution TEM image of a hybrid MoS2 nanoparticle, which had—prior to our work—been unpredicted and unrecognized, is shown in Figure 4(a).5 This nanostructure seamlessly morphs from a nano-octahedral core to a quasi-spherical exterior. It should, therefore, possess both metallic and semiconductor properties (in the core and exterior, respectively) within a single nanoparticle. Lastly, we illustrate—see Figure 4(b)—the first-ever closed-cage nanosuperstructure (50nm in diameter) made from alternating layers of lead sulfide (PbS) and tin sulfide (SnS2), which we generated with our solar furnace method.7 As these two semiconductor materials have noticeably different bandgaps, we expect the misfit PbS-SnS2 nanostructures to reveal interesting optical absorption in the visible range (which could spawn applications in photocatalysis and photodetection). 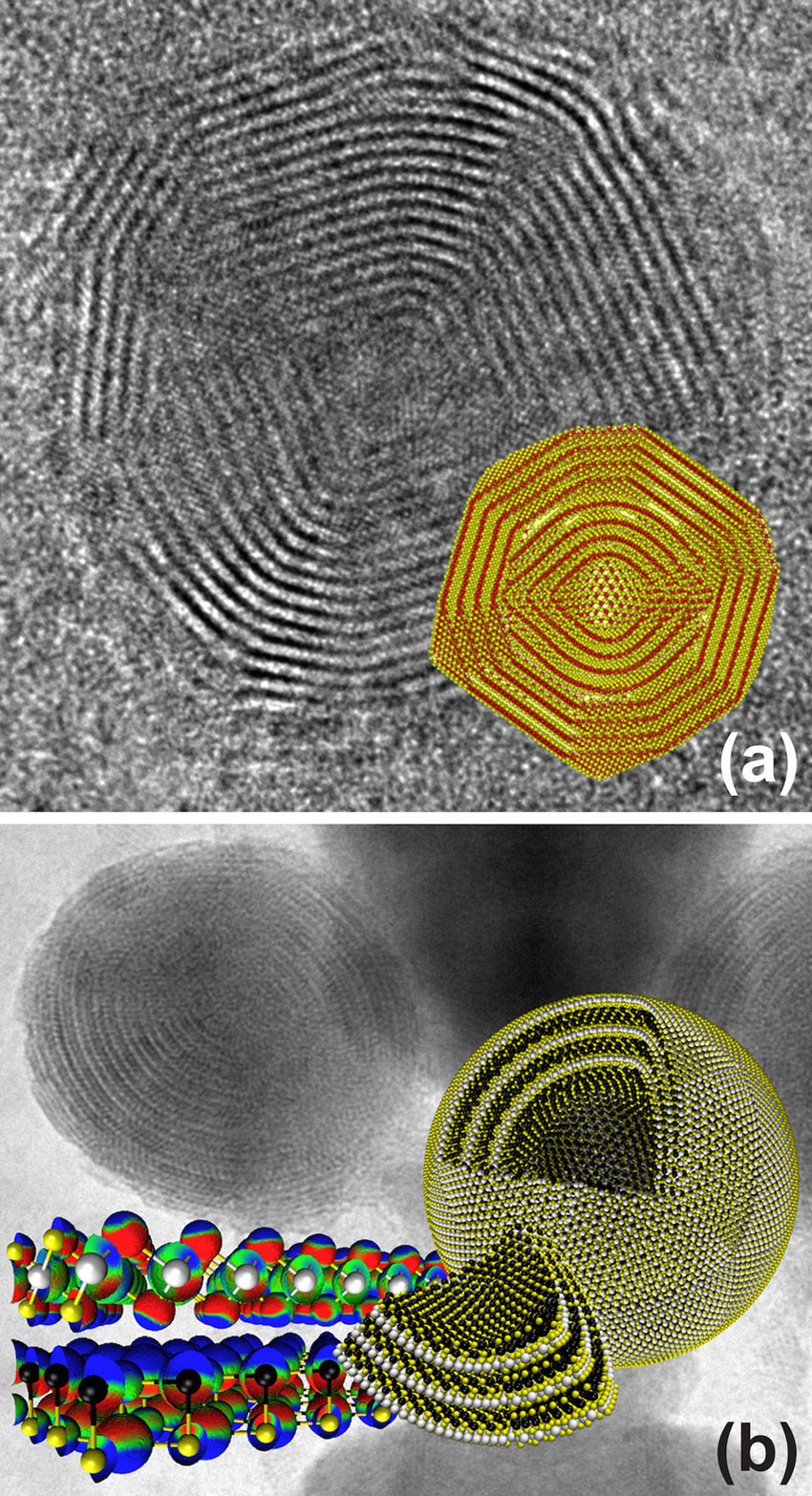 Figure 4. (a) Drawing and high-resolution TEM image of the type of hybrid MoS2nanoparticle that had previously remained unrecognized and unpredicted.5 The diameter of the nanoparticle shown here is 26nm. The nanostructure seamlessly morphs from a nano-octrahedral core to a quasi-spherical exterior, and should therefore possess both metallic and semiconductor properties, respectively, within a single nanoparticle. (b) TEM image and molecular model of the (solar-generated) first-ever closed-cage nanosuperstructure (50nm in diameter) that consists of alternating layers of lead sulfide (PbS) and tin sulfide (SnS2).7

In summary, we have demonstrated a novel solar paradigm for the synthesis of singular inorganic nanomaterials. We have developed a series of solar furnaces to immensely concentrate sunlight and create extreme reactor conditions conducive to nanostructure formation. We have highlighted a number of the singular nanostructures that we produced with this approach. Our results illustrate the eclectic array of new, and often unanticipated, nanomaterials that can thus be realized. Our work also serves as ongoing motivation for the pursuit of novel and valuable nanomaterials through this tantalizing paradigm. So far, we have demonstrated that this solar route is a relatively simple, inexpensive, fast, and reproducible photothermal method. Our future activities will subsume the solar synthesis of core-shell nanoparticles (such as Pb@GaS fullerenes and nanotubes, i.e., that have a lead core and gallium sulfide exterior layers). We will also identify reactor and irradiation schemes that provide high yields of extraordinary nanostructures, such as single-wall MoS2 nanotubes and MoS2 nano-octahedra (for which achieving more-than-sparse yields has so far proven elusive). Lastly, we plan to develop solar ablation as a new, safe, rapid, high-yield, and scalable method for the production of graphene and graphene-like MoS2.