All-optical mapping of the mechanical properties of cells

The recent development of Brillouin microscopy enables the longitudinal moduli of cells to be mapped in high 3D spatial resolution, without the need for contact or a labeling agent.
22 March 2017
Giuliano Scarcelli and Seok-Hyun (Andy) Yun

In the development and homeostasis of cells, mechanical force is an important cue for initiating mechanotransduction (i.e., in which mechanical signals are converted into electrical or chemical signals). The response of a cell to force is governed by its intracellular machinery. Mechanical properties therefore depend on the lineage of the cell, and may be modulated in response to mechanical cues from surrounding tissues.1, 2 The misregulation of cellular mechanical properties can disrupt mechanical homeostasis in tissues and is therefore associated with a variety of diseases, such as cancer and atherosclerosis.3

A wide variety of techniques (e.g., atomic force microscopy, magnetic bead twisting, optical traps, and micropipette aspiration) have been developed to characterize cell mechanical behavior.4 In terms of their principles, these techniques are analogous to macroscopic stress-strain methods (i.e., stress is externally imposed on the cells via physical contact, and the resulting deformation is measured). As such, these techniques are not suitable for characterizing cells that are not directly accessible (e.g., those in 3D culture or within tissues). A fundamentally different technique, known as particle-tracking microrheology (PTM), measures the thermal motion of fluorescent beads and can thus provide noncontact information regarding the local elastic modulus in certain circumstances (i.e., if active forces within the cells are neglected and the cellular medium is considered in thermal equilibrium). PTM is still invasive, however, and the technique is limited in terms of density and resolution due to the number and random location of beads within a sample.5 For these reasons, it is currently difficult to map cellular elasticity within extracellular matrix (ECM) physiological microenvironments, in which cells exist as a meshwork of 3D proteins, using PTM.

To address this limitation, we have developed a new approach that enables noncontact, label-free 3D interrogation of intracellular mechanical properties.6 Our Brillouin optical microscopy technique is based on the interaction between light and spontaneous acoustic phonons (i.e., thermally generated longitudinal vibrational waves). By measuring the optical frequency shift of the scattered light, we can determine the longitudinal modulus of the medium.7, 8 Mechanically, Brillouin interaction can be thought of as a test that measures the ratio of uniaxial stress and strain under confined compression conditions at high frequencies. Because acoustic phonons in the GHz frequency range are localized to submicron-size volumes, the modulus can be interrogated at optical diffraction-limited resolution.

To enable cellular Brillouin mapping, we have combined a confocal microscope (with sub-micron spatial resolution) with an etalon-based Brillouin spectrometer (featuring spectral resolution of ∼0.003nm, spectral extinction of 70dB, and a low loss of  < 10dB). With a low optical power of 4mW (i.e., that is minimally toxic to cells) and a spectral acquisition time of 100ms, we found the measurement sensitivity of the longitudinal modulus to be ∼0.1%. A longitudinal modulus difference of 0.1% is equivalent to a difference of 5–10% in shear modulus, and is of high enough resolution to enable the deformability and elasticity of a cell to be measured.

Our results confirm that by obtaining Brillouin images via confocal microscopy, we are able to map the longitudinal modulus of a cell with 3D resolution. Figure 1 shows an image (obtained using our technique) of an NIH-3T3 fibroblast that has been cultured on a polyacrylamide gel substrate. The image accurately depicts the nucleus within the fibroblast NIH-3T3 cell to be relatively stiff compared to the softer cytoplasm. 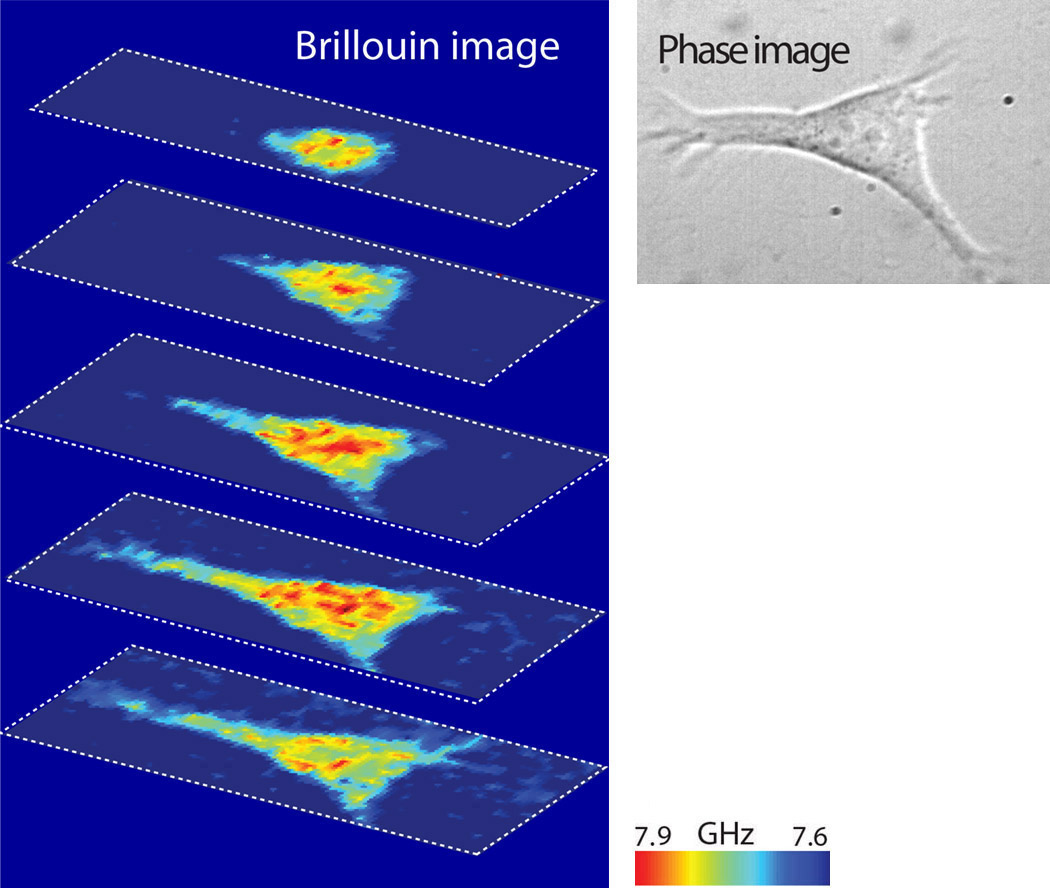 Figure 1. A 3D confocal reconstruction—obtained via Brillouin microscopy—of the intracellular stiffness within an NIH-3T3 fibroblast, cultured on a stiff polyacrylamide gel substrate. The images were taken at different depth planes, at a spacing of 1.5μm. Colors shown represent the measured Brillouin frequency shift.

We have also demonstrated that Brillouin microscopy is sensitive to the regulation of cell mechanical properties that occur due to cytoskeleton modifications, such as actin polymerization and branching.5 Furthermore, by adding sucrose in the cell medium, and thus generating osmotic pressure, we triggered an increase to the elastic modulus of the cell. Brillouin images of the NIH-3T3 cell, obtained before and after this hyperosmotic shock, display a significant increase in the Brillouin shift throughout the cell: see Figure 2(a) and (b). These results show that Brillouin microscopy is sensitive to liquid-solid regulation within a cell under different osmotic conditions.

Figure 2. (a) Brillouin images and co-registered phase-contrast images of a cell before and after hyperosmotic shock (caused by the addition of sucrose to the solute concentration around the cell). (b) The Brillouin stiffness measurement, plotted against atomic-force-microscopy-based micro-indentation tests, for cells exposed to hyperosmotic shocks of different levels (i.e., 0, 150, 300, and 500μM of added sucrose).

To compare our results with the current gold standard for 2D measurement, we performed microindentation by using an atomic force microscope equipped with a 5μm-diameter bead. We subsequently compared the Young's modulus (thereby derived) with the longitudinal modulus obtained by Brillouin microscopy. Our data—see Figure 2(b)—reveals a remarkably high correlation (R > 0.99) between the two moduli types, which are fundamentally related via the Poisson ratio and the frequency dependence of the cell modulus. This correlation is consistent with data for hydrogels and biological tissues that we obtained in previous studies.9

In summary, our Brillouin microscopy method enables the longitudinal modulus of live cells in both 2D and 3D matrices to be accurately mapped. The measurement that we obtain using this technique is sensitive to a range of relevant mechanical changes, such as the liquid-solid volume fraction, Young's modulus, and cytoskeletal changes of cells. Brillouin microscopy opens up new possible research avenues in which spatial maps of elasticity could help our understanding of the way that forces are transmitted and transduced within a cell. In our future work, we will use this tool to study the roles of mechanotransduction and extracellular matrix stiffness in cancer and stem-cell differentiation.