Detection of explosives (e.g., in the field, baggage, or transit systems) has become an intense field of research over the last 15 years. Several physical (such as ion mobility spectrometry, mass spectrometry, and active neutron interrogation) and chemical (including calorimetry, fluorescence quenching, and electro-chemistry) techniques have been investigated as suitable detection mechanisms, and wide-ranging efforts have been made to improve the efficacy of these techniques.1, 2 Each of these detection techniques can also be classified broadly as either a laser-based (i.e., terahertz, photoacoustic, Raman or laser-induced breakdown spectroscopy, or laser-induced fluorescence)2 or a non-laser-based1 method, each having their own merits and problems. Although some of these techniques work well when the sample is in the vicinity of the detecting instrument, others work best for standoff detection (at a distance of a few tens of meters). The main hindrance to such detection techniques, however, is the low vapor pressure of explosive molecules. Moreover, the attributes of an ideal explosives detector should include simplicity, sensitivity, selectivity, rapidity, cost-effectiveness, robustness, and (in certain cases) the capability of standoff/remote detection, but the combination of all these requirements has yet to be realized with a single technique.

Among the various laser-based techniques, Raman-based detection methods (i.e., spatially offset Raman, coherent anti-Stokes Raman, resonance Raman, and random Raman lasing spectroscopy) have been studied extensively and shown to be highly successful. This is because of their potential for label-free molecular identification, in conjunction with a standoff detection capability. In particular, surface-enhanced Raman spectroscopy (SERS)3 has proven to be a potentially effective in-field detection technique for explosives and chemical warfare agents.4 Indeed, several SERS experiments have been conducted to develop this technique for the detection of explosive molecules.4 For effective SERS detection of any analyte molecule, it is necessary for the target molecule to be attached to suitable noble-metal nanostructured substrates that provide strong local-field enhancements. Various substrates have thus been fabricated and examined using different methodologies, and excellent sensitivity for the detection of diverse explosive molecules has been demonstrated.4 To date, SERS—because of its unique qualities and combined high label-free sensitivity and molecular fingerprinting ability—has been efficaciously employed in the fields of homeland security,5 forensics,6 and gunshot residue detection.7 Although there has been a tremendous growth in studies of SERS for practical use in the last few years, the absence of high-quality, stable, and low-cost substrates means that the reproducibility of Raman signature enhancements and the selectivity of the technique are remaining challenges.

In our simple LAL technique, ultrashort laser pulses are focused onto a target (stationary or moving) and ablation takes place while the target is immersed in a suitable liquid. LAL has previously been used to successfully generate a variety of nanoparticles (NPs) and nanostructures (NSs), in a single experiment and exposure, and has thus found applications in catalysis, explosives detection, and photonics. Our preparation of NPs and NSs, as well as the procedure for using them in SERS studies of explosives (or other molecules of interest), is illustrated in Figure 1. In our approach, it is possible to use both NPs and NSs independently for SERS improvements, or to combine them for even greater enhancements. 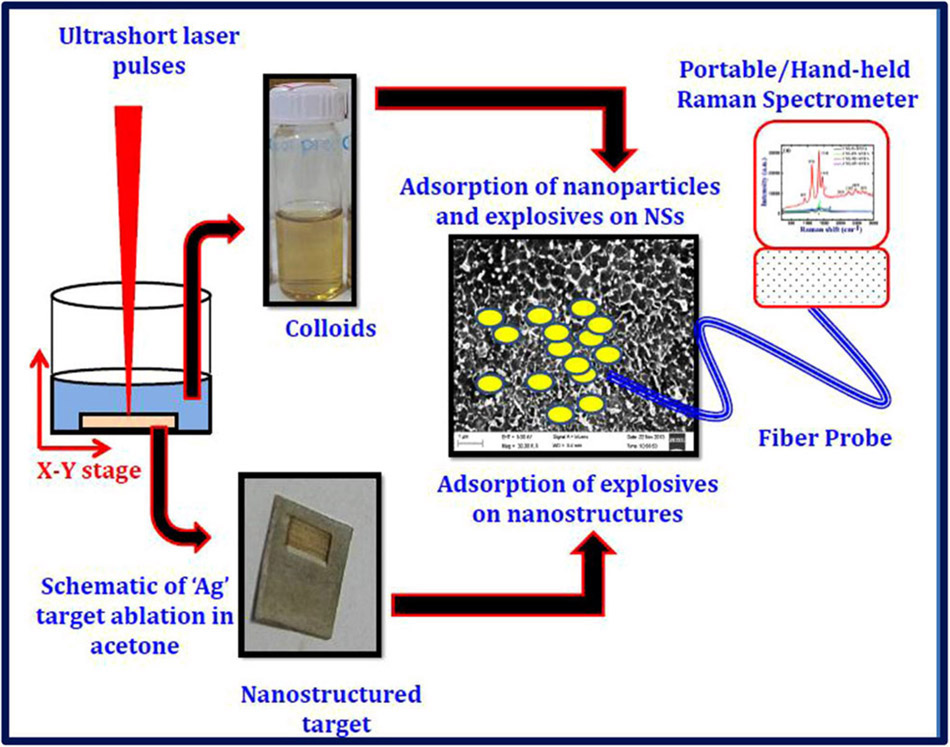 Figure 1. Schematic illustration of the explosives detection procedure in which nanostructures (NSs), of plasmonic metals such as silver (Ag), are prepared with the use of ultrashort laser pulses.

We have conducted a number of studies in which we have investigated a variety of NS substrates. For example, we have realized silver (Ag) NPs and NSs by using double line ablation of a bulk Ag substrate in double distilled water and ∼2ps pulses. With excitation at 532 and 785nm, we were thus able to record SERS spectra of RDX (Research Department Formula X) explosive molecules.8 We also fabricated the Ag NSs (in double distilled water) with a number of different ablation incidence angles (5, 15, 30, 45°) and found that targets prepared at an incidence angle of 30° provided the best performance.10 In another study, we produced Ag NSs with first-order, non-diffracting Bessel beams (∼2ps and ∼40fs).11 With these Ag NSs we demonstrated typical SERS enhancement factors (EFs) of >106 for the explosive molecule CL-20 (2,4,6,8,10,12-hexanitro-2,4,6,8,10,12-hexaazaisowurtzitane).

We have also produced surface NSs on copper (Cu) targets by using picosecond-length ablation in different liquids. To demonstrate the utility of these substrates, we obtained SERS data for the explosive molecules trinitrotoluene (TNT)—see Figure 2—FOX-7 (1,1-diamino-2,2-dinitroethene), and ANTA (5-amino-3-nitro-l,2,4-triazole. By adopting a simple cleaning procedure, we were able to record Raman EFs of up to about 105–108.9, 12,13 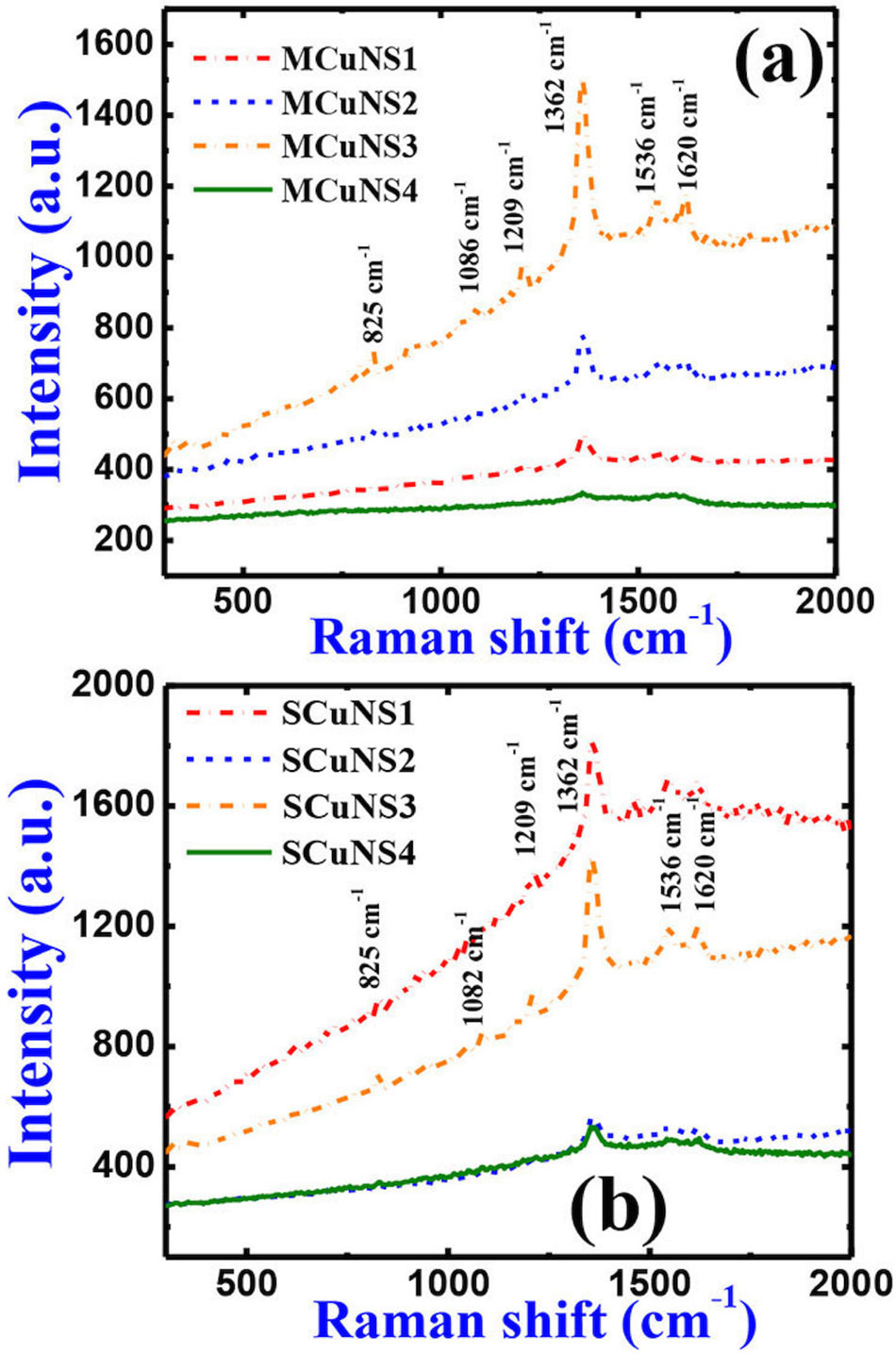 With a hybrid silver-gold (Ag-Au) NS, prepared using ∼40fs pulses, we were able to detect the explosive molecule 1-nitropyrazole at nanomolar concentrations (i.e., 20nM) and FOX-7 at micromolar (μM) concentrations. Our estimated EFs for the SERS data in these cases were typically >108.14 We have also used Ag-decorated zinc oxide NSs for the detection of secondary explosive molecules. For low concentrations of analytes (about 10μM), we achieved SERS signal EFs of about 107, 107, and 104 for ANTA, FOX-7, and CL-20, respectively.15

Some more of our SERS data for explosive molecules is shown in Figures 3 and 4. A field-emission scanning electron microscope image of a Au NS, which we fabricated in water with ∼50fs, ∼400μJ laser pulses, is shown in Figure 3(a). We used this NS as the substrate for the SERS measurements—see Figure 3(b)—of ammonium nitrate (at a concentration of 50μM). Similarly, we used Ag and Au NSs (fabricated in acetone with ∼50fs, ∼500μJ pulses) to obtain SERS data for picric acid at a concentration of 100μM (see Figure 4). 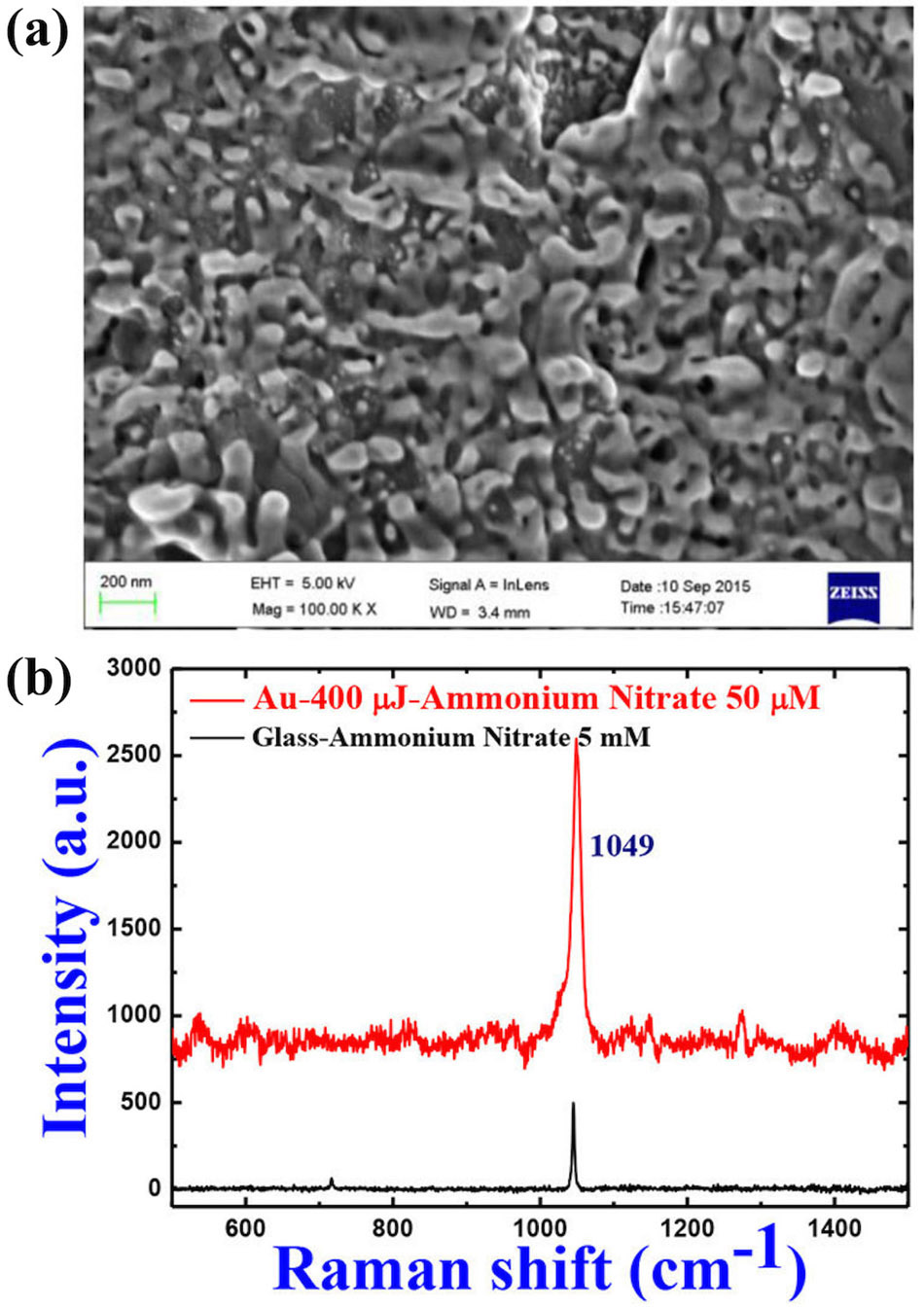 Figure 3. (a) Field-emission scanning electron microscope (FESEM) image of a gold (Au) NS that was fabricated in water, with the use of ∼50fs, ∼400μJ pulses. (b) Comparison of a normal Raman spectrum (black) and a SERS spectrum (red) of ammonium nitrate at a concentration of 50μM (adsorbed on glass and the Au NS, respectively).

Figure 4. FESEM images of (a) a Ag NS and (b) a Au NS, both in acetone, that were fabricated with the use of ∼50fs, ∼500μJ pulses. (c) Comparison of normal (blue) and SERS spectra of picric acid at a concentration of 100μM. The red and black SERS spectra were obtained with the use of the Ag and Au NS, respectively.

In summary, we have developed a novel method for the fabrication of plasmonic metal nanostructures that can be employed for SERS detection of explosive materials. Our stable nanostructured metal targets—produced via the laser ablation in liquids technique—can thus be used to achieve significant SERS improvements during measurements. At present, our method is effective for recording SERS spectra of common explosive molecules with a portable Raman spectrometer and a micro-Raman spectrometer, at μM and nM/pM concentrations, respectively. The results we have obtained so far with our NS substrates (in terms of enhancement factors and sensitivity) are on par with some commercially available substrates.16 It should also be possible to coat nanostructured silicon surfaces (obtained using fs pulses)17 with Ag, Au, or both, for SERS measurements of explosive molecules. With such coatings, we expect the structures to exhibit a large number of hotspots and thereby enable improved levels of detection.

Our ultimate goal is to achieve nM/pM detection of all common explosives (e.g., TNT, picric acid, and ammonium nitrate) with a portable or hand-held Raman spectrometer. In addition, we would like to realize this aim for large-area substrates and to reproduce similar Raman enhancements on a regular basis. Furthermore, we plan to optimize and use the same substrate (i.e., Ag, Au, Cu, or a hybrid) for detecting different explosive molecules. In our future work we will thus focus on obtaining SERS data for common explosives mixed with every-day materials, and with interferences (e.g., matrix effects). We would also like to extend these studies to the detection of explosive vapors. With these versatile targets, combined with portable/hand-held Raman systems, it may be possible to realize the rapid and unambiguous detection of traces of explosives in the field.

Venugopal Rao Soma has published more than 200 papers in international journals and conference proceedings. He was the recipient of the 2012 National Academy of Sciences, India Scopus Young Scientist Award and is a senior member of SPIE, the Optical Society, and IEEE. He is also an associate editor for the journal RSC Advances.

Hamad Syed obtained his PhD from the School of Physics, University of Hyderabad, in 2015. His research interests include silicon photonics, ablation, and SERS. He has more than 25 papers in refereed journals and conference proceedings.

Chandu Byram began his PhD studies at ACRHEM in 2014. His work involves SERS studies for explosives detection. His other research interests include laser ablation in liquids.

Gopala Krishna Podagatlapalli obtained his PhD in physics from ACRHEM in 2015. His research interests include ultrafast ablation, SERS, and coherent anti-Stokes Raman spectroscopy. He has more than 25 papers in refereed journals.