Unraveling the coherent optical response of excited quasi-particles inside semiconductor devices will lay the foundation for the rational design of future photonic devices operating in the quantum regime.
07 December 2016
Alan D. Bristow

The semiconductor devices that are used in optoelectronic and photonic applications often rely on strong excitonic resonances. These resonances can be tailored via bandgap engineering and electronic or photonic structuring. To enable more effective design of such devices, however, a complete understanding of light-matter interactions is highly desirable. Such understanding is likely to be of particular importance in the development of future quantum devices, for which a full knowledge of quantum states, and their interactions and coherence times, is required. For example, the optical control of semiconductor coherences could play an integral role in quantum communications, computers, or simulators. Additionally, inorganic nanostructures are model systems for the study of more complex coherent mechanisms (e.g., photosynthesis1 and photocatalytic devices2).

Over the last decade, coherent control of the optical response of semiconductor nanostructures and microcavities has uncovered the effects of structure and many-body Coulomb interactions. 2D coherent spectroscopy (2DCS),3 in which the optical response is manipulated by using a sequence of laser pulses, represents one such approach. The pulses spread the coherent signal into two spectral dimensions (typically absorption and emission frequencies). This approach enables the coherent response from single resonances and the coupling between resonances to be observed as separate spectral features. Confinement in quantum wells (QWs), for example, splits heavy- and light-hole excitons (due to their different effective masses), and 2DCS exhibits features that couple the two excitons.4 This observation definitively proves that oscillations in the photon-echo transients5 arise due to interactions in the QWs (i.e., quantum interference), and not as a result of optical interference in the detector. 2DCS of QW excitons also reveals how homogeneous broadening of a spectral feature relates to the memory of an excitation and the role of many-body interactions. Spectral features may, however, exhibit inhomogeneous broadening as a result of electronic confinement,6, 7 and can even yield information about strain, as seen in bulk gallium arsenide (GaAs).8 Moreover, since 2DCS is a multipulse coherent-control scheme, it can also be used to examine non-radiative contributions (e.g., Raman or two-quantum coherence) by projecting these signals onto the emitted radiation. 2DCS has also been recently demonstrated as a powerful tool for examining photonic devices.9–11 The success of this approach is, in part, due to the separation of various quantum mechanical excitation pathways, and the sensitivity of the resulting spectral features to differing light-matter interactions.

In our work, we have used 2DCS to examine the coherent response of semiconductor microcavities.10 To fabricate the microcavities, we precisely grew monolithic heterostructures of GaAs and related III-V semiconducting alloys. As illustrated in Figure 1, these structures comprise a narrow optical cavity (of GaAs) that is encased between two distributed Bragg mirrors (i.e., aluminum arsenide/GaAs bilayers) and contains an InGaAs (indium gallium arsenide) QW at the peak of the optical spatial mode. If the frequency of the optical cavity mode (γ) is in resonance with the excitonic mode of the QW (X), the system is said to have zero detuning. Close to zero detuning, coupling of the cavity and exciton is sufficiently strong to result in normal-mode splitting. This is because energy is repeatedly exchanged between cavity and exciton (see Figure 1). In this case, the lower and upper polariton modes (LP and UP, respectively) are partly excitonic and partly photonic. In comparison to the heavy- and light-hole excitons in GaAs QWs, the polaritons also share the same ground state, but the polaritons are significantly lighter. We can then use 2DCS to probe the differences between these two systems. 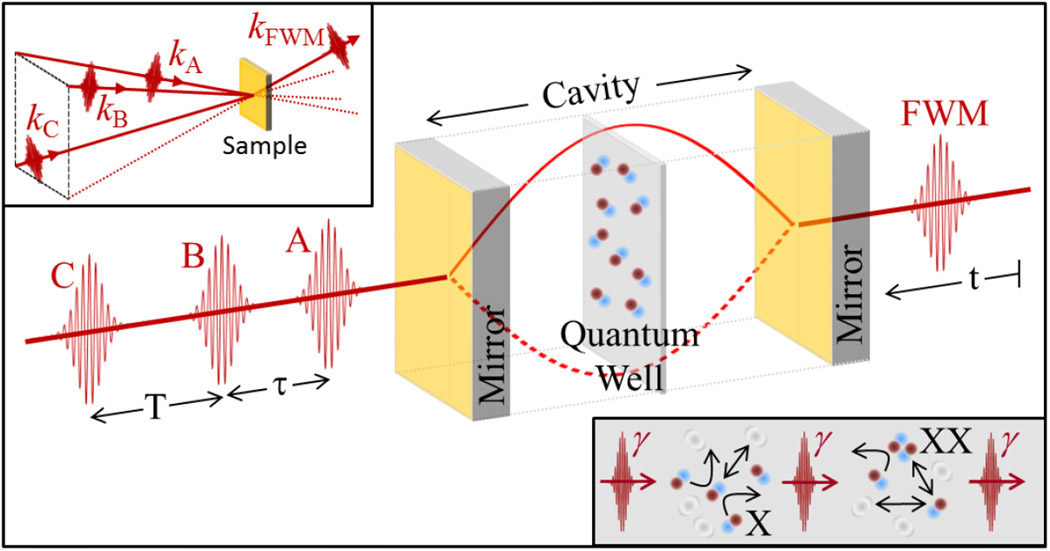 Figure 1 shows three pulses striking one side of the microcavity. Pulses A, B, and C are arranged with wavevectors kA, kB, and kCso that the four-wave mixing FWM that is emitted is diffracted in a direction without transmission of the incident pulses. Each pulse has controllable delay times (i.e., an evolution time, τ, between A and B, and a mixing time, T, between B and C.) By collecting the spectrum of the FWM emission (i.e., the emission energy) while varying τ and holding T fixed, we can obtain the 2DCS spectrum.

There is a slight spatial gradient to the cavity width across the wafer of our microcavity, and the energy of the cavity mode increases as the cavity becomes thinner. The cavity mode can therefore be adjusted by translating the pulses across the sample. Consequently, we can detune the cavity mode from the exciton mode. Figure 2 shows the 2DCS detuning dependence, where the spectral features follow polariton anticrossing behavior.10 Away from zero detuning, one polariton mode is more excitonic and the other more photonic. As a result of this, we find that the 2DCS amplitudes and line shapes of the diagonal features are no longer identical. Moreover, the associated off-diagonal features are extremely sensitive to the coupling between polariton modes and the local electronic environment in which this coupling takes place. We observed that the relative amplitudes of the polaritonic-coupling features swap at positive detuning, when the lower polariton branch crosses the biexciton resonance. Since exciton-polaritons are singly excited states of the system and biexcitons are doubly excited states, this behavior is similar to Feshbach resonances in ultracold atoms.12 As such, exciton-polaritons could be used to further simulate atomic interactions, especially in a regime where bosonic condensates exist.

Figure 2. Exciton-polaritons for three values of detuning (Δ), obtained via 2DCS. Negative detuning occurs when the cavity mode has lower energy than the exciton mode. At non-zero detuning, exciton (X), biexciton (XX), and cavity (γ) modes are observed. At near-zero detuning, the linewidths and amplitudes of the diagonal lower- and upper-polaritonic modes (i.e., LP and UP, respectively) are nearly identical. The off-diagonal coupling resonances (UP-LP and LP-UP) are sensitive to interactions between the two states, and to other states in the system.

In summary, we have shown that 2DCS can provide significant insights into the behavior of quantum phenomena in photonic devices. Coherence times will be one of the critical parameters for photonic devices operating in the quantum regime. Coherent processes depend on excitation conditions and internal electronic structure. Moreover, the role of few- and many-body interactions cannot be ignored. Indeed, provided that the material system and any associated excitation scheme is rationally designed, these interactions can be used to benefit their operation. We have already achieved the complete measurement of interaction parameters for an atomic vapor using multidimensional coherent spectroscopy.13 This approach allows for in situ knowledge that can enable a deterministic coherent control of a physical or chemical system. One immediate challenge that we hope to overcome is determining the coherent response in solids and heterostructures, and the effects of electric and magnetic fields in existing exciton-based devices. Such investigations into excitons, biexcitons, and exciton-polaritons with two- or higher-dimensional coherent spectroscopy will shape the design and operation of a wide range of future technologies.

Alan D. Bristow earned his PhD from the University of Sheffield, UK, and subsequently worked as a postdoctoral researcher at the University of Toronto, Ontario, and JILA (a joint laboratory of the US National Institute for Standards and Technology and the University of Colorado at Boulder). He was an adjunct instructor at the Colorado School of Mines and became an assistant professor at West Virginia University, where he is now an associate professor.