Non-centrosymmetric crystals whose optical response does not vary linearly with the strength of an electric field—known as nonlinear optical (NLO) crystals—are the fundamental building blocks for most electro-optic applications. For example, the conversion of laser wavelengths, through parametric processes, requires large and precisely oriented single-crystal materials. The NLO crystals are thus used to create tunable laser sources that are capable of generating coherent light, from the UV to IR. The production of novel NLO crystals, however, is very difficult because it entails bulk techniques that require long growth times and expensive equipment, and that often result in low-quality crystals.

For more than three decades, lasers have been used to make modifications to glass refractive indices in the fabrication of high-efficiency waveguides.1 Moreover, in recent work, it has been shown that femtosecond pulses are capable of modifying the glass refractive index and of precipitating single NLO crystals in supersaturated glasses.2, 3 Initially, this crystallization was achieved with the use of continuous wave (CW) laser beams that were absorbed by the glass. The use of CW sources, however, limited the modifications to the surface of the glass. In contrast, the high intensities produced by femtosecond laser sources mean that the ultrafast pulses undergo multiphoton absorption, which enables precise crystal growth within the bulk of the glass.4 The use of femtosecond laser sources therefore expands the versatility of the technique, by facilitating the fabrication of multidimensional structures composed of many types of NLO crystals.

In our work,5 we therefore use a high-repetition-rate femtosecond laser to grow NLO crystalline structures in glasses. In our approach, we focus the laser into a supersaturated glass to precipitate lithium niobate (LiNbO3) below the glass surface. By translating the sample through the focus of the beam (see Figure 1), we can form the aligned crystalline NLO structures. In addition, by adjusting the laser and writing parameters, we can modify the structures and optimize the process. The modifications to the writing parameters that we have made in this work have thus increased the knowledge base required to inscribe optical-quality single-crystal structures. 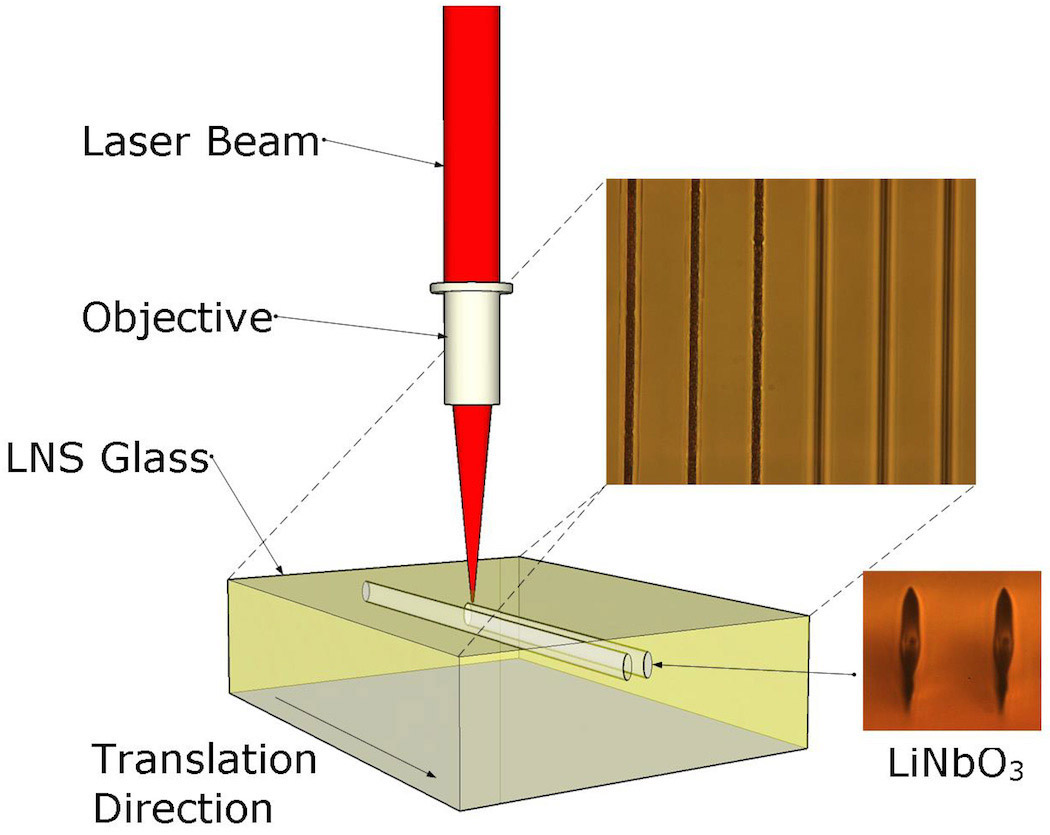 Figure 1. Illustration of the experimental setup for writing into supersaturated glass with a femtosecond laser. The view of the written region, as the glass is translated through the beam focus, is in the plane of the page. The micrographs (shown on the right) were taken looking into the sample from the same direction that the laser beam entered (and of the end facets). LiNbO3: Lithium niobate. LNS: Customized supersaturated glass composed of lithium superoxide, niobium pentoxide, and silica.

We made the customized glass for our study (known as LNS) by melting 33% lithium superoxide, 33% niobium pentoxide, and 34% silica at 1450°C.4 To achieve a quench of this low-viscosity melt, we reduced the temperature to 1300°C, then quenched the sample in a steel mold that had been preheated to 540°C, and finally covered it with a second preheated steel mold. We then slowly cooled the glass to room temperature. We tested a variety of tactics to minimize striations on the sample, and we can now routinely produce 1 × 1 × 3cm glass pieces that are polished on all sides. In addition, about 90% (or more) of the volume of these samples can be used for writing purposes.

The laser source we use for inscription is a high-repetition-rate (300KHz) femtosecond laser system (an IMRA FCPA μJewel). In our search for an optimized process, we have varied the average power and writing speed of this system. We found that the writing speed has a profound effect on the topology of the written structures. For writing speeds between 400 and 20μm/s, our inscribed structures were smooth through the entire structure, but there was no crystal precipitation. With writing speeds of less than 20μm/s we did achieve precipitation, but with ever lower speeds the edges of the tracks became rough.

We have also used Raman spectroscopy to determine the phase of our inscribed structures. The Raman spectrum for a glass-only structure is shown in Figure 2(a). When the sample also contains crystals, we observe sharp lines in the Raman spectrum—see Figure 2(b)—and we are able to identify the phonon lines of LiNbO3 in the spectrum.6 We used the Raman data to investigate the correlation between writing speed and the crystallized/glassy-written structures for an average power of 500 (see Figure 3), 250, and 600mW. We find that for all powers, 20μm/s was the maximum speed at which LiNbO3 precipitated. This indicates that the crystal growth front propagates at about the same speed at all power levels. 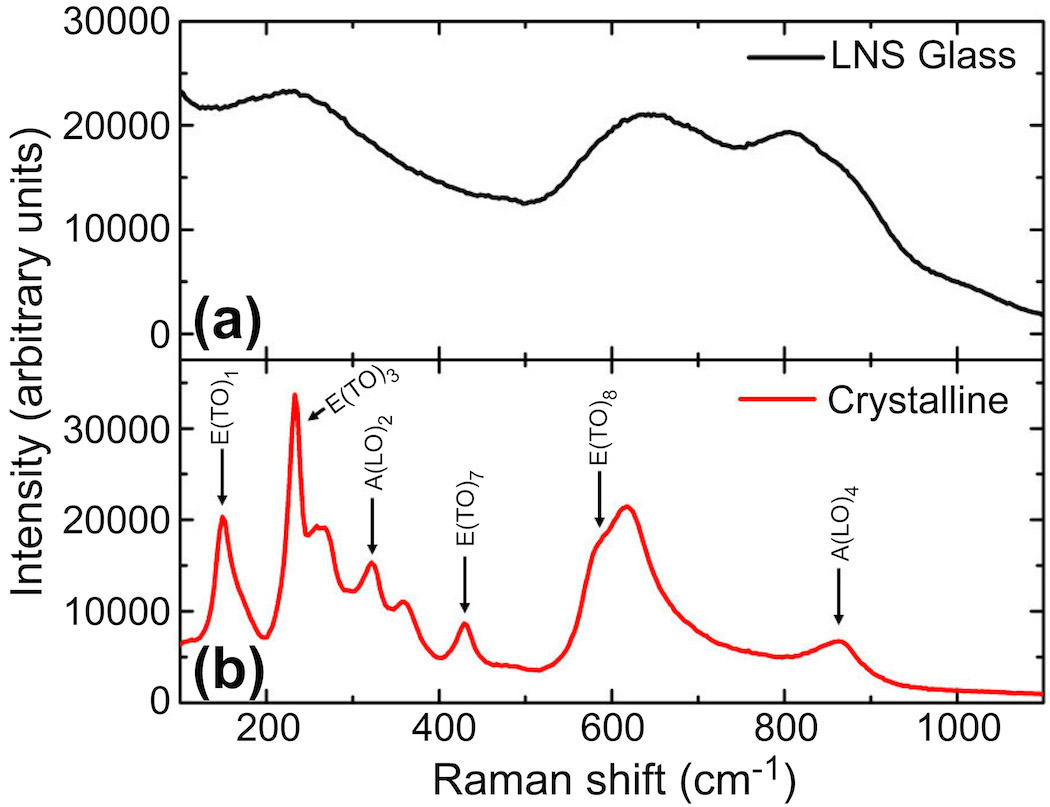 Figure 2. Raman spectra from written tracks within LNS glass, in which (a) no precipitate formed and (b) a crystalline precipitate formed. The spectrum in (b) is very similar to that of bulk LiNbO3. The transverse optical (TO) and longitudinal optical (LO) components of the E and A phonon modes of LiNbO3can easily be identified.6 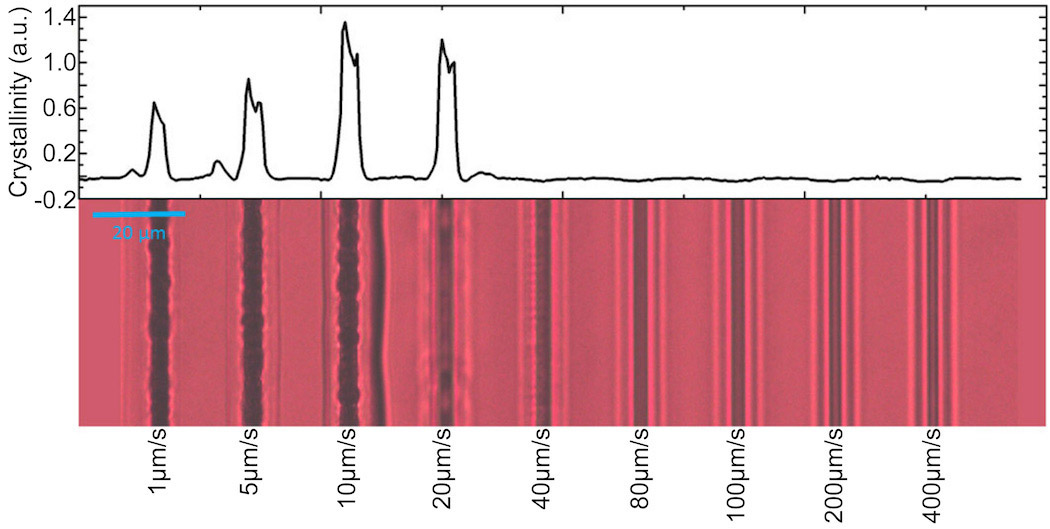 Figure 3. Top: Computer-generated analysis (using Renishaw's WiRE software) of the Raman data shown in Figure 2. Bottom: Micrograph (obtained from the same perspective of the laser beam) of the laser-inscribed structures written into glass at different writing speeds (1–400μm/s). These tracks were all written using an average power of 500mW. The component mapping function of the Raman analysis software was used to objectively determine the extent to which the crystalline spectrum was present. This analysis was conducted automatically, along a line that ran perpendicular to the direction of the laser-written tracks. The results indicate that the four leftmost tracks matched the crystalline spectrum, but there was no indication of matching to the crystal spectrum for the five tracks to the right. a.u.: Arbitrary units.

In summary, we have used a high-repetition-rate femtosecond laser to successfully grow LiNbO3 crystals, under various writing conditions, in a customized supersaturated glass. We have also conducted a number of tests to determine the optimum laser parameters for our technique. In future work, we plan to use the knowledge and experience we have gained to generalize the process for the growth of many other materials in supersaturated glasses. In addition, we will use our approach to construct 2D and 3D electro-optic structures.