Cargo logistics—driven by cytoskeletal motors and proceeding along actin and microtubule filaments—are an essential subsystem of the overall machinery of eukaryotic cells. Indeed, it is no stretch to say that virtually every process in a living cell depends, directly or indirectly, on proper routing of cargoes in a timely fashion. Much progress has been made in the last few decades in understanding the structure and properties of individual filaments and motors, but clean experimental modeling of how these components add up to a functional cytoskeleton still poses many challenges.

One major challenge stems from the fact that microtubule structures in cells form 3D arrangements with nontrivial architectures.1, 2 Existing in vitro techniques do not offer a single-filament level of control (e.g., chemical self-assembly) and have so far proved sufficient only for reproducing a few limited types of intracellular filament structures.3 It is thus difficult to capture the complexity of the microtubule cytoskeleton and associated cargo transport in a controlled environment, because it requires dynamic and precise 3D manipulation of multiple individual microtubules.

We tackled this task using holographic optical trapping4 to independently position multiple refractive particles attached to individual microtubules in 3D.5 We hypothesized that this approach would allow us to build and probe (in vitro) microtubule structures that mimic the natural 3D cytoskeleton. Indeed, a few years ago we reported the construction of a novel instrument designed specifically for these types of experiments.6 We combined two well-established technologies: holographic optical trapping and ordinary optical trapping with a capability for fast repositioning in the field of view in one experimental setup.

In our approach, the holographic traps allow us to position many objects in 3D and to independently manipulate them as needed. However, this holographic pattern rearrangement is slow, i.e., still far below 1kHz, even after several years of system development. In contrast, an ordinary trap, moved by a piezo mirror or an acousto-optic deflector, is a singular trapping center confined to the focal plane of the objective, but its repositioning is orders of magnitude faster than holography. Our successfully demonstrated simultaneous operation of these two trap types (see Figure 1) therefore enables both particle manipulation in 3D and experimental probing over a wide frequency range. 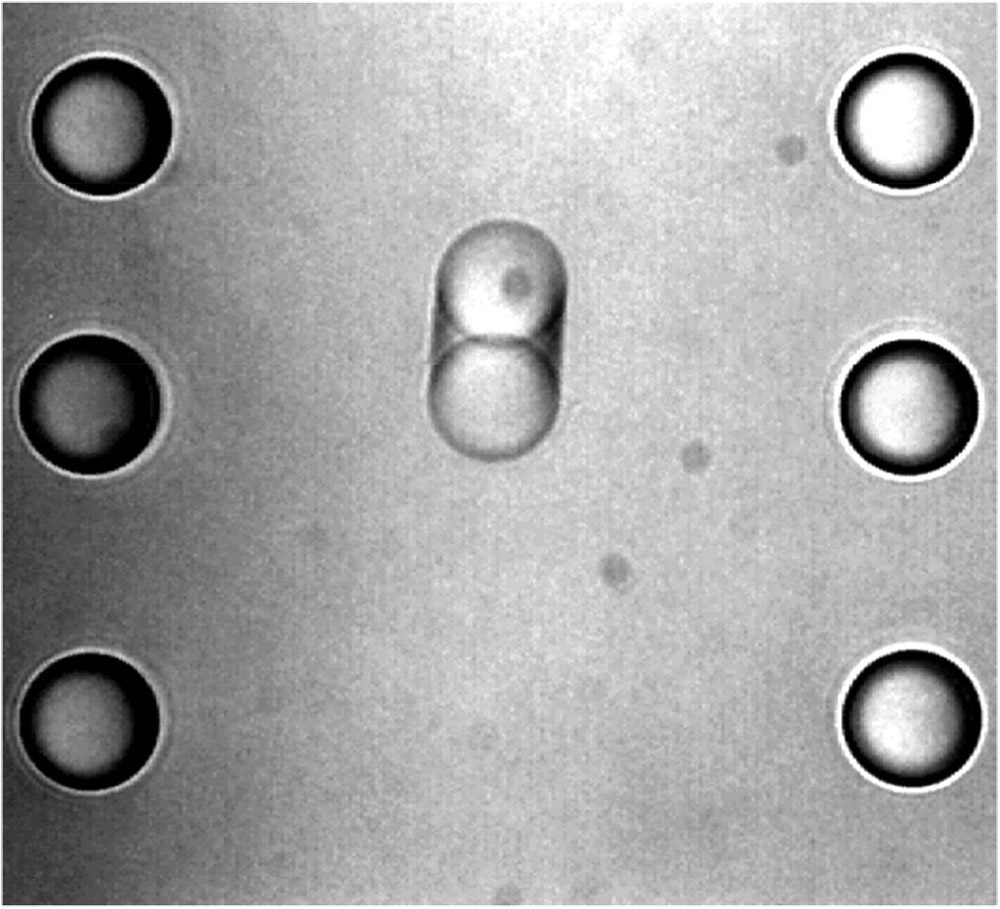 We have recently used our holographic optical trapping technique to show that complex microtubule structures can be built in vitro by attaching refractive beads to microtubules and manipulating these filaments in 3D.5 Crucially, we established that beads with high chemical affinity for microtubules can be introduced into the same assay as microtubules and that the two species can be largely kept separate from each other until controlled assembly takes place. Using this approach, we demonstrated that microtubule polarity can be easily identified. In addition, we demonstrated that microtubule intersections can be constructed in 3D and re-arranged on the fly, as desired (see Figure 2). We also showed that stable cross-linked 3D structures can be built in a controlled fashion. 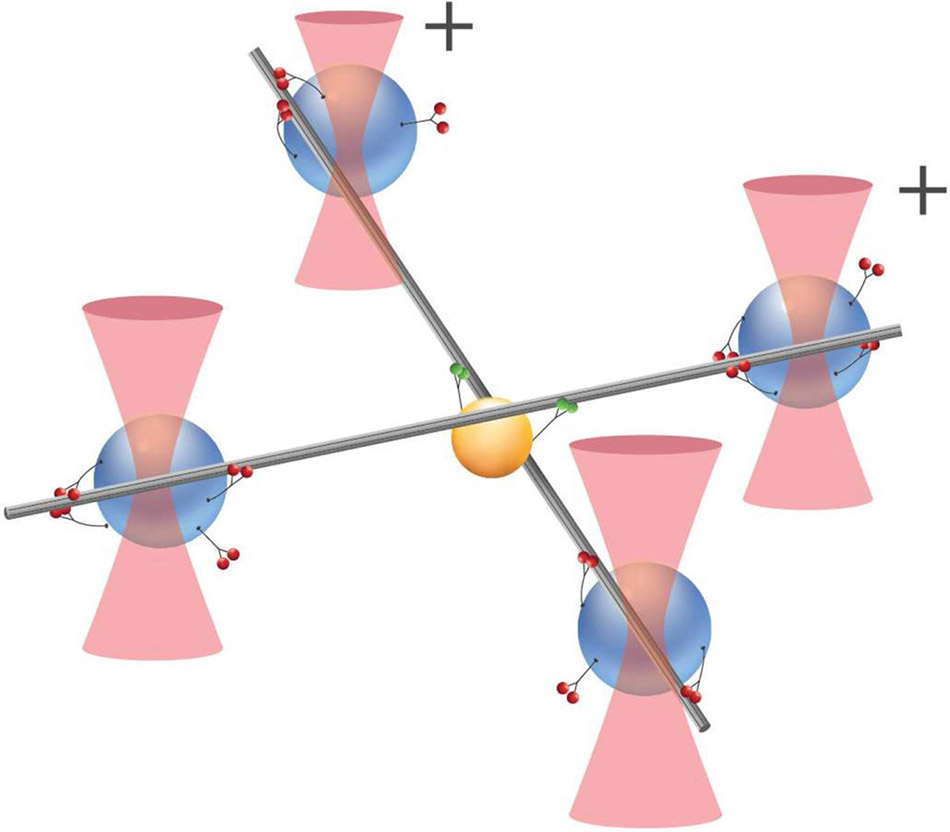 Figure 2. A schematic illustration of a microtubule–microtubule intersection. Four outside beads (blue) are held in holographically defined optical traps (rose) that position two microtubules (gray) in a crossed arrangement. A bead (yellow) decorated with active motors (motor heads highlighted in green) can be used to model how intracellular cargoes navigate this basic subunit of cytoskeleton architecture. Enzymatically dead motor heads shown in red. Microtubule positive ends are labeled to underscore that each filament polarity is known. (Artwork designed by Alyssa Jorgenson.)

In our most recent developments7 we have focused on demonstrating that our approach can be scaled up and on developing rules to enable efficient construction processes at sub-micrometer scales. We have shown that complex and fairly dense shapes (see Figure 3) can be constructed with control and efficiency. Moreover, these developments help us to formalize the building process, which will eventually enable computerization and automation, especially when our microtubule imaging improves. We also have shown that the complexity of microtubule structures is sufficient not only to perform baseline minimal biomechanics and cargo transport experiments, but also to explore how the results from such experiments apply to more complex microtubule networks. 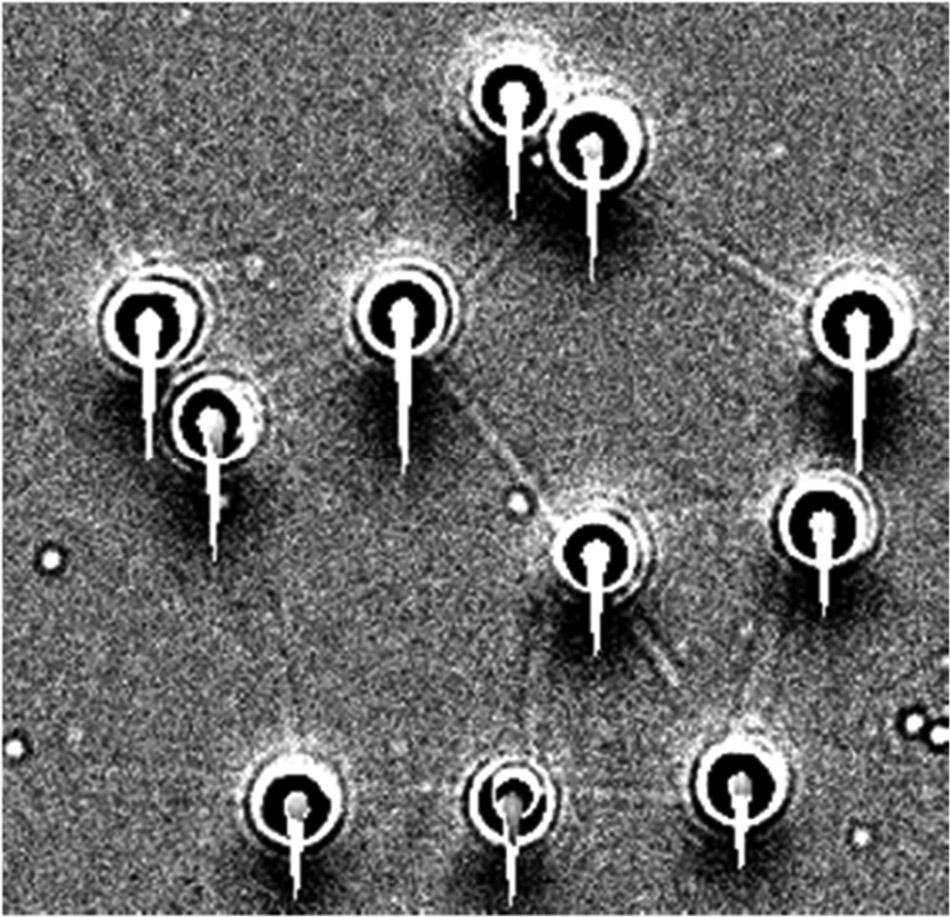 Figure 3. Eleven beads are held in holographically defined optical traps (not visible) that position seven microtubules in a pentagonal arrangement with additional internal Y-shaped links. Bead imaging is oversaturated to better observe faint microtubule structures, and a streaking artifact on the camera is seen for each bead.

In summary, we have previously shown that microtubules can be used effectively for nanoscale and microscale construction and experimentation. This fundamental development, however, left open some important questions. For example, how could our approach be scaled up? And how could the construction process be streamlined with an eye toward eventual automation? We are therefore now in the process of describing many of the rules that we have developed for our building process and how they can be integrated to optimize nanoscale construction and enable a faster and more efficient workflow. We are also now routinely building microtubule-based networks with increasing throughput to study intracellular transport and the role of the microtubule cytoskeleton in cell mechanical responses. Finally, we are laying the groundwork for increasing the automation of the assembly of custom-designed filament networks.

This work was supported by National Science Foundation grant ENG-1563280 to Michael Vershinin.

Michael Vershinin is an assistant professor in the Department of Physics and Astronomy, and is also affiliated with the Department of Biology and the Center for Cell and Genome Science, all at the University of Utah.