An LED with an emissive organic thin film sandwiched between the anode and cathode is known as an organic-LED (OLED). The emission mechanism of an OLED is superficially similar to that of a standard LED, i.e., holes and electrons are injected from the anode and cathode, respectively, and these carriers recombine to form excited states (excitons) that lead to light emission.1 In recent years, smartphones and TVs with OLED displays have rapidly become widespread because OLEDs provide high contrast, a wide color gamut, light weight, thinness, and flexibility for the displays. OLEDs also have great potential for the creation of new lighting applications.2 The high power consumption and short lifetime of OLEDs, however, remain key issues.

To reduce the power consumption of OLEDs, both the drive current and the voltage need to be reduced. In addition, to minimize the drive current, the quantum efficiency (photons/electrons) needs to be boosted. To realize these changes, the use of phosphorescence—emitted from triplet excitons—is thought to be an effective approach, because the generation percentages of singlet and triplet excitons in an OLED are 25 and 75%, respectively.3 Furthermore, phosphorescent emitters (e.g., iridium complexes) can theoretically be used to enable an internal quantum efficiency of 100%. This is because they can convert the singlet excitons to triplet excitons via intersystem crossing.4–7 To maximize the quantum efficiency in this method, the phosphorescent emitter must be dispersed within a host material in the emission layer (EmL).4 The introduction of the host material, however, results in an increase to the drive voltage and it often causes degradation of the device.

To address these issues, we have developed a new device architecture known as ‘exciplex–triplet energy transfer’ (ExTET),8–12 and we illustrate the elementary process of an ExTET OLED in Figure 1(a). In the EmL of our device, we dope a mixture film—consisting of an electron-transporting material (ETM) and a hole-transporting material (HTM)—with a phosphorescent dopant. Injected electrons and holes are thus transported through the ETM and HTM, respectively. In our ExTET OLED design, direct recombination—between the electron at the lowest unoccupied molecular orbital (LUMO) level of the ETM and the hole at the highest occupied molecular orbital (HOMO) level of the HTM—forms a charge-transfer excited complex (exciplex) in which the ETM and HTM have negative and positive charges, respectively. In the final part of the process, phosphorescent emission occurs via energy transfer from the exciplex to the dopant. 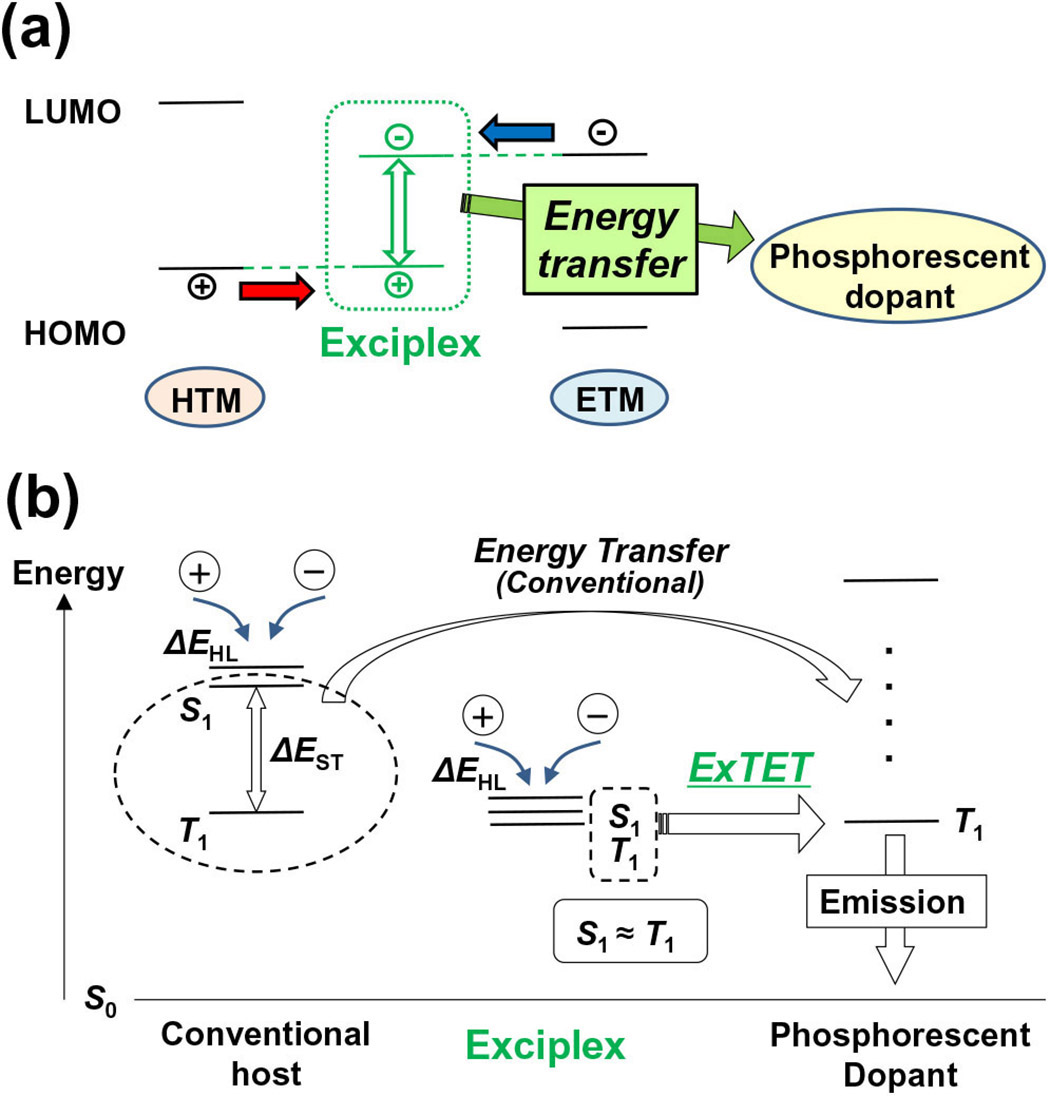 In our work, we have compared the energy state of a conventional phosphorescent OLED (PHOLED) with that of our ExTET OLED, which is illustrated in Figure 1(b). In a PHOLED, the lowest triplet-excited state (T1) level of the host must be equivalent to or higher than that of the dopant, i.e., so that luminescence quenching is avoided. However, the lowest singlet-excited state (S1) level of the host is much higher than the T1 level of the dopant because the energy gap (ΔEST) between S1 and T1 is normally large in normal organic compounds. The drive voltage therefore increases, because a large S1 energy gives rise to a large HOMO–LUMO gap (ΔEHL). In contrast, the ΔEST of an exciplex is extremely small.13, 14 Both the S1 and T1 energies of the exciplex can therefore be directly harvested to the dopant (by adjusting their energy levels in the ExTET OLED). We also note that formation of the exciplex (by direct recombination) effectively reduces the drive voltage, because the S1 level of the exciplex (i.e., ΔEHL) is close to the T1 level of the dopant.

We fabricated ExTET OLEDs (with green, yellow, orange, and red emission colors) by doping the specific exciplex with various phosphorescent dopants. We achieved extremely high external quantum efficiencies (about 30%) with all of our devices (see Figure 2). These results indicate that the internal quantum efficiency reached almost 100%, because the theoretical limit of outcoupling efficiency has been reported as 20–30%.15, 16 We also find that the current–voltage characteristics of our ExTET OLEDs overlap perfectly with those of an exciplex-emission OLED that has no dopant. This result demonstrates that the exciplex acts as the recombination site in each ExTET OLED and results in low drive voltages, of about 3V (see Figure 2). 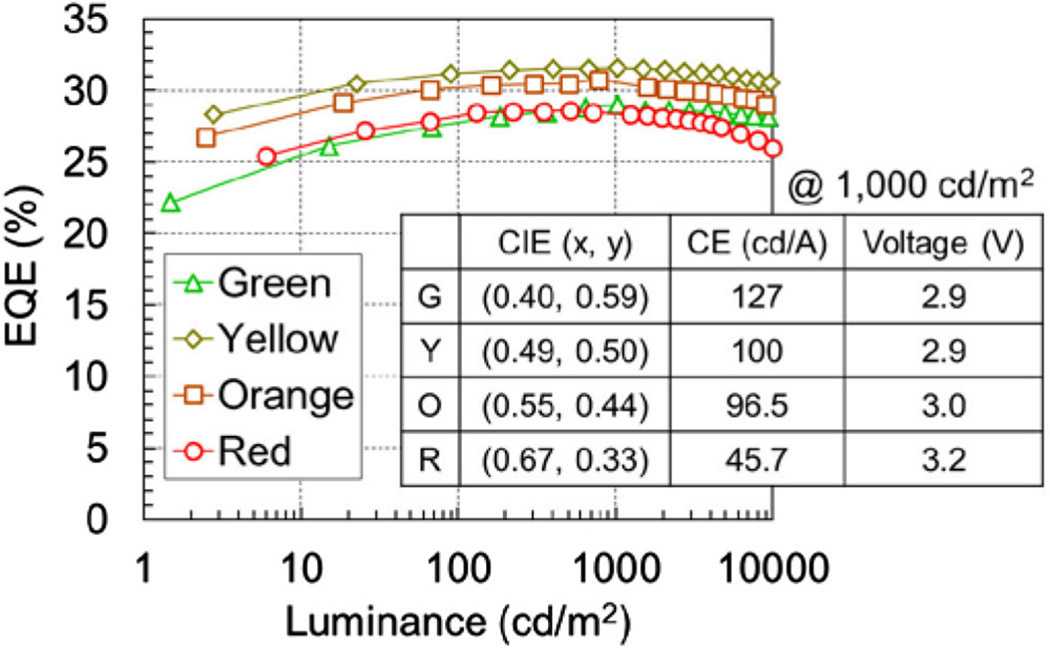 We have also conducted luminance acceleration tests, as illustrated in Figure 3(a). We estimate that the luminance half-life of our green, yellow, orange, and red devices, at an initial luminance of 1000cd/m2, is 800, 600, 1300, and 100khr, respectively (where khr is 1000 hours). These long lifetimes prove that the exciplex formation does not seriously degrade the OLED, as long as the exciplex acts as a medium for the energy transfer. Furthermore, the lifetimes we measure—see Figure 3(b)—depend on the dopants that we use. This suggests that the lifetimes of our fabricated ExTET devices are determined by the dopants rather than by the exciplex (because of the complete energy transfer). 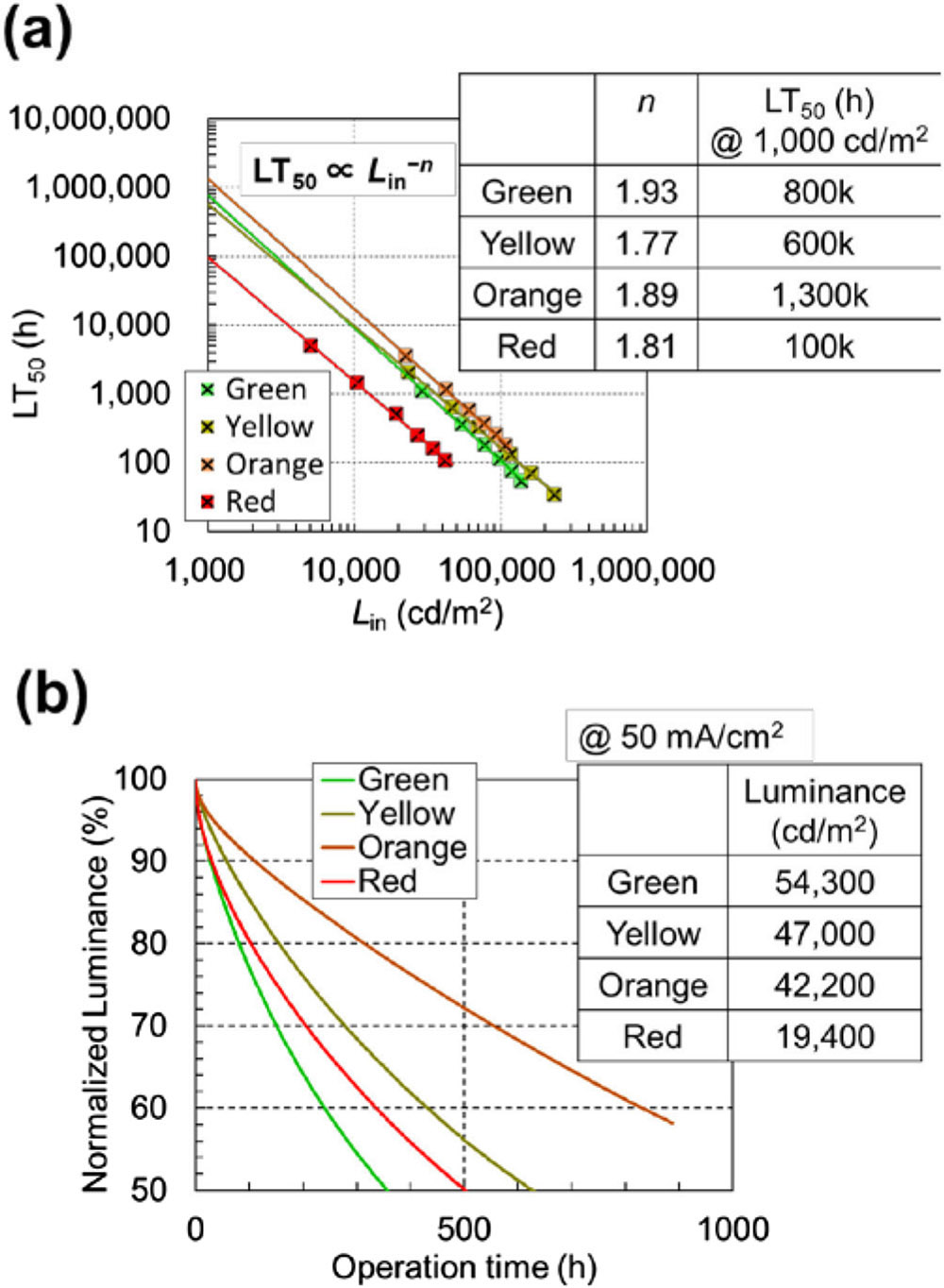 Figure 3. Illustrating the reliability of the ExTET OLEDs. (a) Results of luminance acceleration tests. LT50: Luminance half-life. Lin: Initial luminance. n: Acceleration factor. (b) Luminance decay curves for the devices, when they are driven by a constant current of 50mA/cm2.

In summary, we have developed the exciplex–triplet energy transfer mechanism for OLEDs. So far, we have successfully fabricated very low power, long-lived OLEDs that have emission colors ranging from green to red. In the next stages of our work, we intend to produce a blue OLED using our approach. Although the realization of a blue PHOLED is widely regarded as implausible, we believe that our ExTET architecture can be used to overcome this limitation.