A quantum heat engine can be realized by subjecting a single layer of graphene to a combination of an external magnetic field and mechanical strain.
30 August 2016
Enrique Muñoz and Francisco J. Peña

A quantum heat engine (QHEN) is a nanoscale device that enables the conversion of heat to useful work. In these open systems—analogs of classical engines—a 'working substance' that has quantum mechanical properties undergoes a cycle of sequential transformations.1–8 From a practical point of view, QHENs represent an opportunity for nanoscale energy harvesting. Indeed, a number of practical examples and applications of the QHEN concept have previously been described in the literature. For example, photosynthesis in plants9 and light harvesting with human-designed photocells4, 5 are familiar examples of the process, where thermalized photons are the working substance. In addition, a number of different designs, based on various principles, have been proposed. These include entangled states in a qubit,10 as well as quantum mechanical versions of the diesel6 and Otto cycles (i.e., the operating principles of diesel-fueled and gasoline-fueled car engines, respectively).7, 11–13 In general, idealized reciprocating QHENs involve a stationary limit cycle3, 14 consisting of a sequence of intermediate equilibrium states that can be described microscopically by a density matrix operator that depends on a minimal set of macroscopic variables.14, 15

As part of these developments, we have recently proposed a magnetically driven QHEN that combines the effects of a parabolic confining potential (which can be provided by a semiconductor quantum dot) with an external magnetic field.15, 16 In this work, we make use of this general concept and analyze a magnetostrain-driven QHEN.17, 18 In particular, we show that the unique electronic and mechanical properties of single-layer graphene (i.e., a graphene flake) combined with an external magnetic field and controlled mechanical strain can be used to construct a QHEN.

In graphene, the presence of certain shear strain patterns leads to the emergence of a gauge field (as described by effective Dirac continuum theory) whose curl represents a pseudomagnetic field.19–23 Interestingly, realistic experimental values of strain can lead to extremely large (>100T) values of the associated pseudomagnetic field (as evidenced by the emergence of effective relativistic Landau levels).22 In practice, however, it is difficult to modulate the strain pattern with extreme precision. Nevertheless, we can tune the confining length scale by imposing a real external magnetic field, which can be controlled with high precision.15, 17 Our method of superposing shear strain and an externally controlled magnetic field therefore provides a suitable system for generating a magnetostrain-driven reciprocating QHEN.

To analyze the operation of our QHEN, we can consider an ensemble of single-particle systems whose microscopic configurations are described by a density matrix operator. Furthermore, as in a classical heat engine, we treat an idealization of the operating cycle as a sequence of quasi-static processes, where the system is arbitrarily close to equilibrium. The system can thus be described by an equilibrium density matrix operator, and the ensemble-averaged energy and entropy can be defined accordingly. For a quasi-static process—induced by modifying a given parameter in the system (e.g., the magnetic field)—we can use a microscopic formulation of the first law of thermodynamics (i.e., which is applicable to a nanoscale system) to identify the heat and work exchanged.

For example, we have considered a graphene flake that is subjected to an external magnetic field (normal to the plane of the flake) and to mechanical strain.17 The latter induces a gauge field, which corresponds to a pseudomagnetic field that is also normal to the plane. We were thus able to obtain the exact single-particle spectrum for these conditions.17 For a Gibbsian ensemble, we can analytically calculate the partition function from this exact spectrum, and we can directly obtain the internal energy and entropy from the expression of the partition function.

Our proposed QHEN cycle (see Figure 1) is composed of two isoentropic trajectories and two trajectories in a constant magnetic field. Along each trajectory, we can calculate (using our nanoscale formulation of the first law of thermodynamics) the heat and work exchanged by the system, given the temperature of the source and drain thermal reservoirs.17 Lastly, we can use a parametrization of the QHEN efficiency in terms of the compression ratio to define the thermal efficiency of the engine (see Figure 2).17 This compression ratio represents the ratio of the Landau radii, which characterize the effective spatial localization of the Landau spinor solutions for a given total magnetic field.17 Remarkably, our thermal efficiency expression is directly analogous to the efficiency of a classical Otto cycle (i.e., where the compression ratio is defined in terms of the length of the piston that confines the classical fluid). 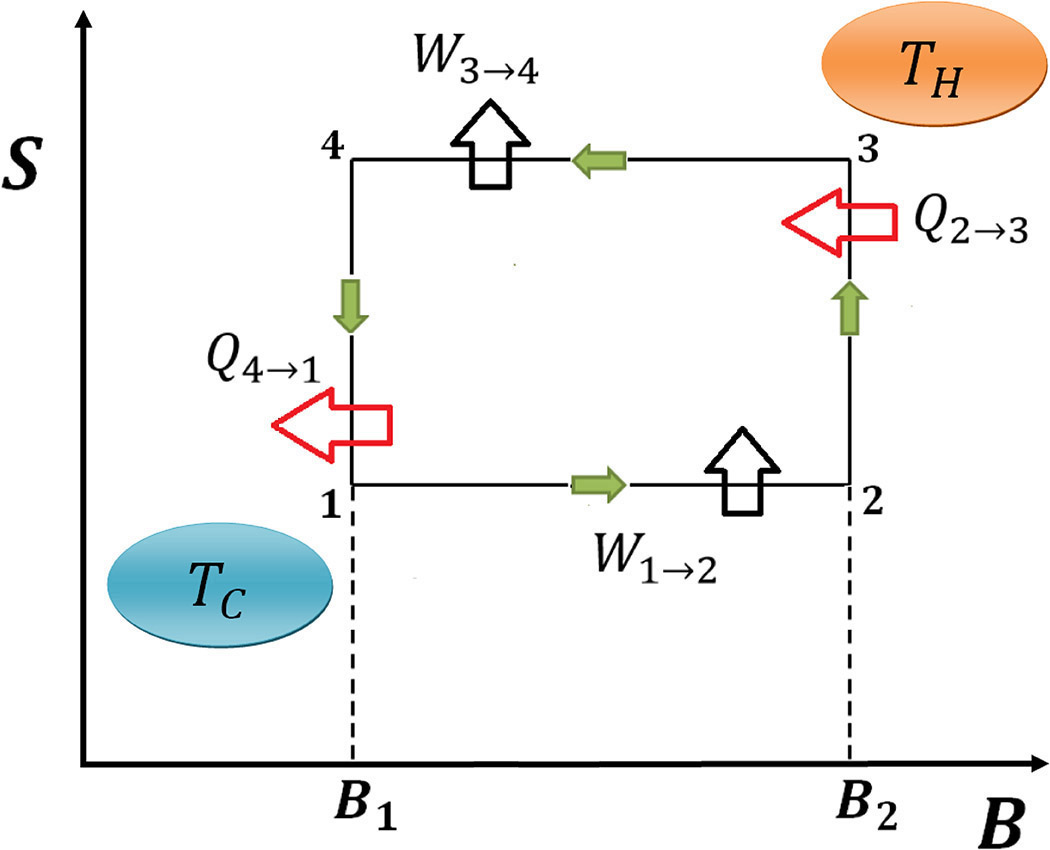 Figure 1. Schematic illustration of our magnetostrain graphene flake quantum heat engine (QHEN) cycle, in terms of entropy (S) and the imposed magnetic field (B). Black arrows indicate the flow of work (W), red arrows represent the direction of heat flow (Q), and green arrows indicate the direction of each of the four processes that constitute the cyclic operation of the engine. THand TC: Temperature of the source (hot) and drain (cold) thermal reservoirs, respectively. Along the horizontal lines, B increases (right arrow) or decreases (left arrow) between B1and B2, while S is kept constant. Along the vertical lines S increases (up arrow) or decreases (down arrow) because of heat exchange with the reservoirs when TH >TC, while B is kept constant. 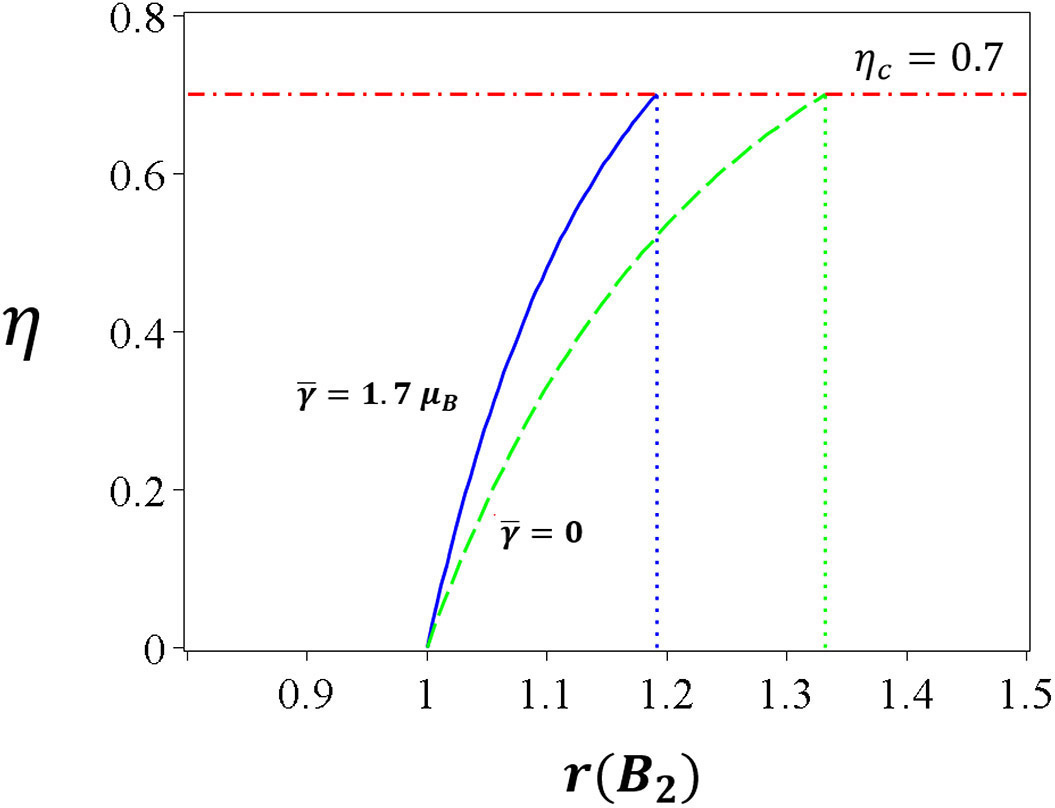 Figure 2. Efficiency (η) of our QHEN, as a function of the compression ratio, r(B2). The dashed horizontal (red) line represents the Carnot limit (ηc). In this case, B1 (see Figure 1) is 4T, the pseudomagnetic field imposed on the graphene flake by the applied mechanical strain is 20T, and TH and TCare 100 and 30K, respectively. The blue and green lines represent different levels of pseudo-Zeeman coupling

, where μB denotes the Bohr magneton.

In summary, we have proposed a novel quantum heat engine that works by imposing an external magnetic field and a controlled mechanical strain on a graphene flake. As part of our proof-of-principle study, we calculated the theoretical quasi-static limit of the efficiency of this engine. Our results indicate that it follows a simple formula, which constitutes a quantum mechanical version of the Otto cycle. Our QHEN configuration also acts as a conceptual prototype for a nanoscale device suitable for thermal-energy harvesting. In our future work, we will study the effect of many-body interactions in the system.