Gradient refractive index (GRIN) optical elements use spatially graded refractive index profiles to make light travel in a physically curved path.1 By introducing curved pathways for light, GRINs offer an opportunity to decouple the optical function of an element from its physical shape, enabling optical elements such as carpet cloaks2, 3 and flat lenses.4 Flat, silicon-based GRIN microlenses are useful within photonic integrated circuits,4 while the presence of birefringence affords GRIN elements the ability to perform distinct optical functions depending on the polarization of the input light field.5 Unfortunately, realization of such elements has so far relied on slow, serial nanostructuring of silicon that typically confines these GRINs to thin, 2D architectures.2–4, 6,7

Porous silicon (PSi) represents another manifestation of nanostructured silicon. PSi—formed by electrochemically etching a flat silicon wafer in a hydrofluoric acid electrolyte—is a highly promising option for GRIN applications,8, 9 as its nanoscale porosity (i.e., void fraction), and thus effective refractive index, is defined by the etching current density and can be varied along the 1D etch path during fabrication.10, 11 A 2D or 3D GRIN can be formed by way of a spatially varied current density.12 The current-density-dependent etch rate of PSi inhibits flat elements,13, 14 however, while current spreading leaves sharp GRIN profiles inaccessible.

We have found that a more versatile approach is to start with a silicon wafer that features preformed microstructures. These microstructures serve as the starting point for the lateral etching that is required to form PSi 3D GRIN micro-optics (see Figure 1, left).15,16 Shape-defined PSi formation begins with a p-type silicon wafer featuring a thinly doped n-type surface. Microfabrication generates an array of silicon microstructures—e.g., square columns (SCs)—to be electrochemically etched. The n-type surface of the wafer serves as a cap on each SC, inhibiting PSi from forming at this surface.17 This is because PSi formation is a hole-mediated process and proceeds preferentially within p-type silicon, undercutting the n-type cap (see Figure 1, right).

Next, a time-varying current density generates a GRIN along the etch pathway that initiates at all uncapped silicon/electrolyte interfaces. The ease with which complex current waveforms can be applied makes complex GRIN profiles readily accessible, whether discrete, continuous, or a combination of the two. For example, a waveform consisting of discrete segments (20, 200, and 400mAcm−2) can be immediately followed by a continuous, linear increase (20–400mAcm−2), resulting in the structure and GRIN profile shown in Figure 2. Additionally, as demonstrated here, the PSi etch can be halted to leave a bulk silicon core. This not only expands the achievable refractive index design space but also creates the option for incorporating functional silicon within a PSi GRIN device.

Within a GRIN device, the columnar microstructure of the PSi runs orthogonal to the surface from which etching is initiated. This has optical implications given that the pore orientation of PSi defines the optical axis of a uniaxial birefringent medium.18,19 For the SC, this results in four birefringent domains converging at the center of the element (see Figure 3). For optical characterization, PSi SCs can be detached from silicon and dispersed onto a transparent substrate where they land on their side. Figure 4 (top) contains a schematic of a side-lying PSi SC that summarizes the birefringent and GRIN aspects of its optical behavior.

Figure 3. Microstructural aspects of shape-defined PSi micro-optics. Left: Scanning electron micrograph showing a fully etched SC. Right: Higher magnification micrograph of the boxed region at left that shows the convergence of four domains with defined pore orientation at the center of the square. The golden arrows are included as a visual aid. 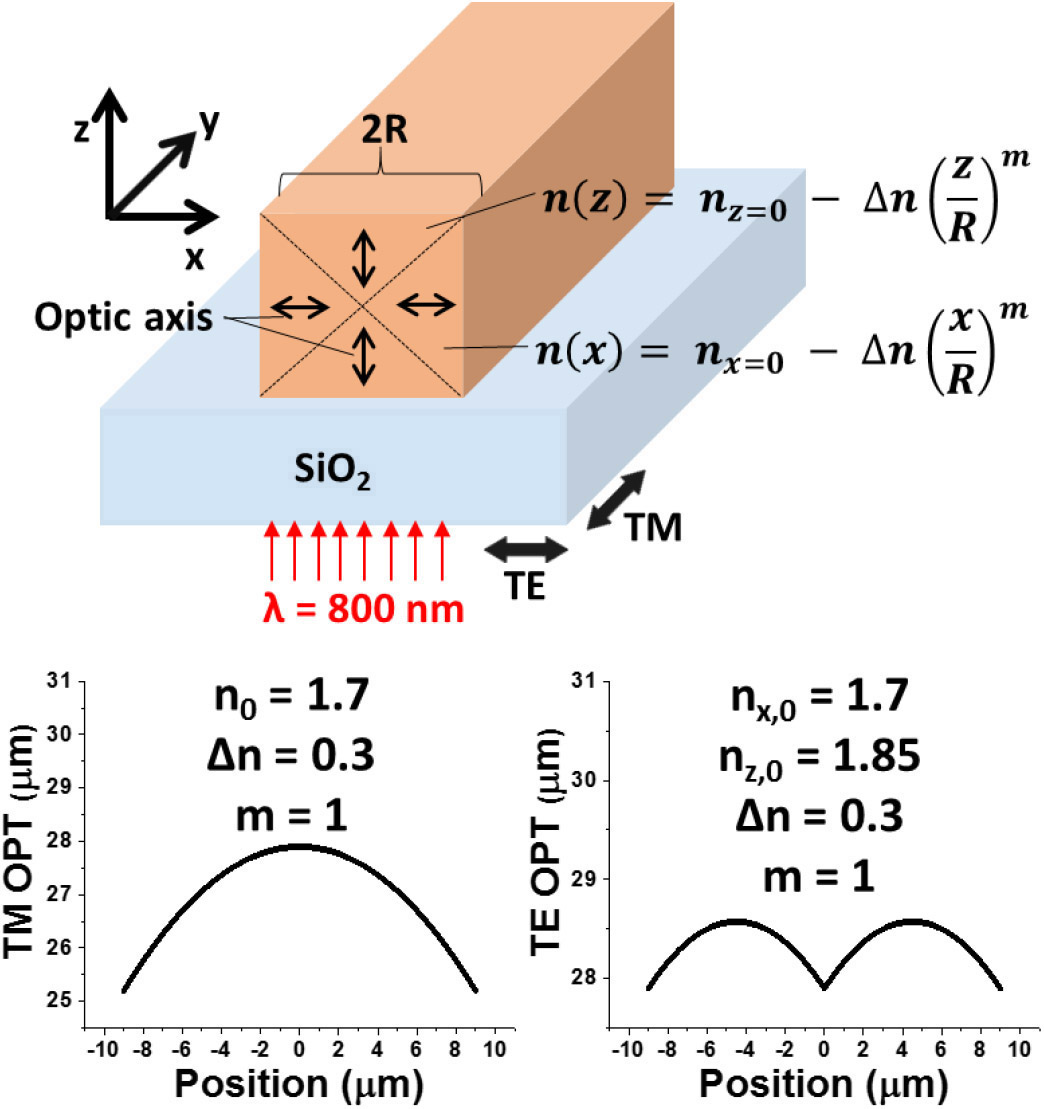 Figure 4. Predictive optical analysis for linear GRIN PSi SCs. Top: Schematic of the optical characterization of a side-lying GRIN PSi SC that has been displaced from its silcion fabrication and dispersed onto a transparent substrate. The schematic points out key optical properties, including the refractive index profile and polarization. TE: Transverse electric. TM: Transverse magnetic. Bottom: Optical thickness profiles of a linear GRIN PSi SC when illuminated with (left) TM-polarized and (right) TE-polarized light. OPT: Optical thickness. nx=0: Refractive index at x=0. nz=0: Refractive index at z=0. Δn: Change in refractive index between center and edge. R: Half-width of the geometry. m: Order of the polynomial describing the GRIN profile.

As a predictive tool for this optical behavior, we use the optical thickness (OPT) of the structure, which effectively describes how it perturbs the phase front of light. For a GRIN PSi SC, this is given by 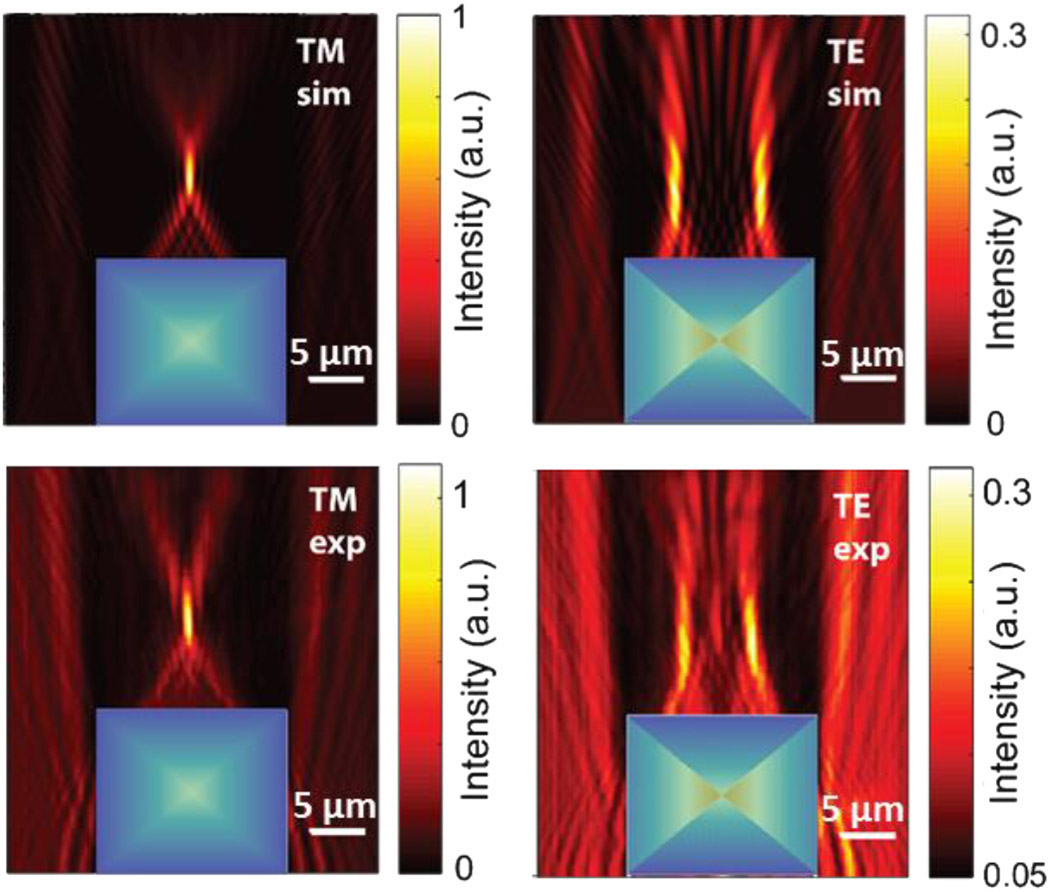 In summary, shape-defined PSi formation represents a new, highly scalable approach toward silicon-based birefringent GRIN micro-optics. We have studied the coupled effects of birefringence with a linear GRIN profile applied to an SC geometry, creating a microlens that performs polarization-selective focusing. In the future, new geometries (within the constraints imposed by the crystal-structure-dependent anisotropic formation of PSi20) can be coupled with more exotic GRIN profiles to pursue more exotic devices.21 Based on our results, we suspect that there are opportunities for such structures within photonic integrated circuits to perform polarization-sensitive operations such as modal conversion or splitting. We have begun investigating new geometries and index profiles as well as material conversion and infiltration processes that extend the available application and spectral compatibility space of PSi GRIN micro-optics.

This work was supported by the Dow Chemical Company and the US Department of Energy ‘Light-Material Interactions in Energy Conversion’ Energy Frontier Research Center under grant DE-SC0001293. This research was also conducted with Government support under and awarded by the Department of Defense, Air Force Office of Scientific Research, National Defense Science and Engineering Graduate (NDSEG) Fellowship, 32 CFR 168a (N.A.K. and A.H.). The authors gratefully acknowledge experimental assistance from Seung-Kyun Kang, John A. Rogers, Weijun Zhou, Glennys Mensing, and Christian R. Ocier.