Synchrotron ‘pink beam’ tomography for the study of dynamic processes

The very high flux of an x-ray beam reflected from a mirror is used for rapid synchrotron microtomography, as an alternative to monochromatic beams.
22 August 2016
Mark Rivers

Computerized axial tomography scanning has revolutionized medical imaging, and through microtomography, its spatial resolution can be reduced from the millimeter scale to the micrometer scale.1 Microtomography has developed rapidly in recent years, driven by developments in x-ray sources, computers, and particularly in detectors. Indeed, there are now microtomography systems available for laboratory use and many synchrotron beamlines dedicated to microtomography have been developed. Furthermore, microtomography has been applied to many fields including biology,2 geology,3 soil science,4 and the study of meteorites.5 Typically, monochromatic beams are used in synchrotron beamlines to avoid the beam-hardening artifacts that are present in polychromatic laboratory sources. In addition, because the synchrotron energy is tunable, studies above and below the absorption edge of high-atomic-number elements are possible and enable element-specific 3D imaging. However, the monochromator on a synchrotron beamline typically transmits less than 0.1% of the beam, which means that the flux on the sample is greatly decreased and the data collection time increases. Monochromatic beams are therefore generally unsuitable for dynamic studies, particularly on bending magnet and wiggler beamlines.

So-called pink beam microtomography is an alternative to monochromatic beams for dynamic studies. The term ‘pink beam’ refers to the fact that a monochromator is not used, but rather the x-ray beam is reflected from a grazing incidence mirror. The mirror only reflects energies below a certain threshold, which depends on the mirror coating and grazing incidence angle. In addition, x-ray absorbing foils can be placed in the beam to remove low-energy x-rays. The result is a tunable broad bandwidth, with an x-ray flux that is more than 1000 times that of a monochromatic beam.

We have thus implemented pink beam tomography on the GeoSoilEnviroCARS 13-BM-D bending magnet beamline at the Advanced Photon Source.6 This beamline is equipped with a 1.1m-long, vertically downward deflecting, platinum-coated silicon mirror. We can bend this mirror elliptically to either focus or defocus the beam, and the grazing incidence angle can be varied from 0 to more than 5 milliradians (mrad). The beamline also contains water-cooled absorber foils of aluminum, titanium, and copper (each of which is 1mm thick). With an appropriate mirror angle and absorber, a broad bandwidth x-ray spectrum can be tuned to give the optimum contrast for the sample. Indeed, by bending the mirror to defocus, we can significantly increase the beam height at the specimen to 6mm at 80keV (with good vertical uniformity). The raw spectrum of this beamline (i.e., directly from the source) is shown in Figure 1, as well as the spectrum with a 1mm-thick titanium foil absorber and with a mirror angle of 2mrad. The pink beam is in the 25–45keV range with a peak around 40keV, and most of its x-rays are above the absorption edge of iodine (indicated by the green vertical line). The beam is therefore excellent for studying porous media that contain water with an iodine contrast agent (i.e., iodine will be very absorbing of x-rays, and give good contrast compared with solid material in the sample). 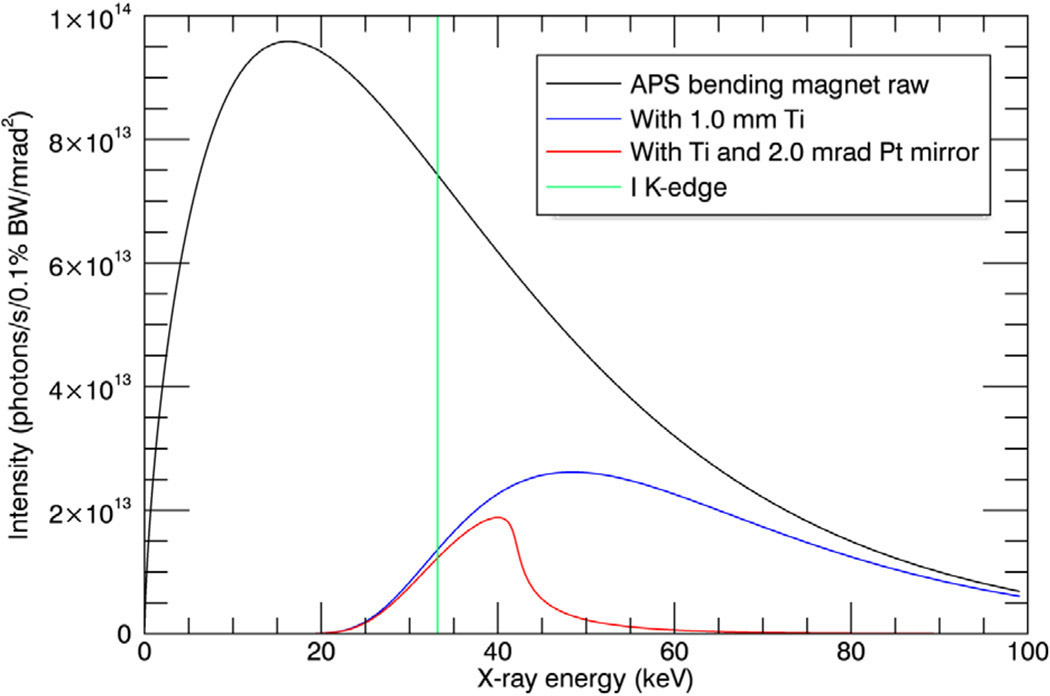 Figure 1. The spectrum of the GeoSoilEnviroCARS 13-BM-D bending magnet beamline at the Advanced Photon Source (APS). The separate spectra illustrate the beam straight from the source (black), with a 1mm-thick titanium (Ti) absorber (blue), and after reflection from a platinum (Pt) mirror with a 2mrad grazing angle (red). The iodine (I) K absorption edge at 33.169keV is shown in green.

To take advantage of the pink beam's high flux for dynamic studies, a camera with a fast frame rate, good sensitivity, and a high dynamic range is required. Until recently, however, such cameras have been quite expensive. Moreover, the x-ray radiation levels in the beamline's experiment station are high when we use the pink beam, so radiation damage to the camera is also a significant concern. Fortunately, a new generation of fast, inexpensive cameras with excellent performance characteristics have recently become available. We therefore use the new GS3-US-23S6M camera from Point Grey in our work. This camera has very low noise (7 electrons), high full-well capacity (32,000 electrons), and can be used to collect 163 frames/second (8bit) or 120 frames/second (12bit) over a USB-3.0 interface. The camera costs less than $1000, yet it produces tomography data that is of equal quality to that of devices costing 15–20 times more.

To illustrate the utility of our pink beam technique, we have obtained images (see Figure 2) of a cement test sample in both monochromatic beam mode (at 33.269keV) and in a pink beam mode (using the spectrum shown in Figure 1). Both images have 1920×1200 pixels (where each pixel has a size of 3.68×3.68μm) and were obtained with 900 projections. For the monochromatic data, the time per projection was 2.0 seconds and we took 31 minutes to acquire the entire dataset. In contrast, the time per projection for the pink beam data was 0.007s and we obtained the whole dataset in 9.5s. We find that the pink beam data is noticeably sharper and has a better signal-to-noise ratio. This is because the monochromatic beam image was obtained at a lower-than-ideal energy so that the sample could be imaged above and below the iodine absorption edge. For the pink beam data, the signal-to-noise level can easily be further improved by collecting even more projections. For example, we could increase the number of projections from 900 to 2700 and still keep the total data collection time to less than 30s.

Figure 2. Top: Cement sample imaged with 33.269keV monochromatic x-rays, with 31 minutes of data collection. Bottom: The same sample imaged in only 9.5 seconds with the pink beam spectrum shown in Figure 1. The darker phases are a mixture of calcium silicate, calcium hydroxide, and calcium aluminate minerals. The bright phase is a second calcium aluminate, in which iodine is substituted into the crystal structure to improve the x-ray contrast.

One of the main applications of our approach is for the imaging of fluid imbibition and drainage in porous media systems.7 Two images collected (in pink beam mode with the spectrum shown in Figure 1) from a time series, as water was draining from a sandstone sample, are shown in Figure 3. The pixel size for these measurements was 3.2μm, the time per projection was 0.007s, and we obtained the entire dataset in 9.5s. We collected these datasets every 90s so that we could observe how the water drainage through the sample occurred. In the images water appears bright (because it is doped with iodine), sand grains are gray, and air is black. The bottom image was collected about 30 minutes after the top image, and it is clear that the amount of water decreased (and the amount of air correspondingly increased) in that time. We also see that some pores changed significantly, whereas others did not change at all. 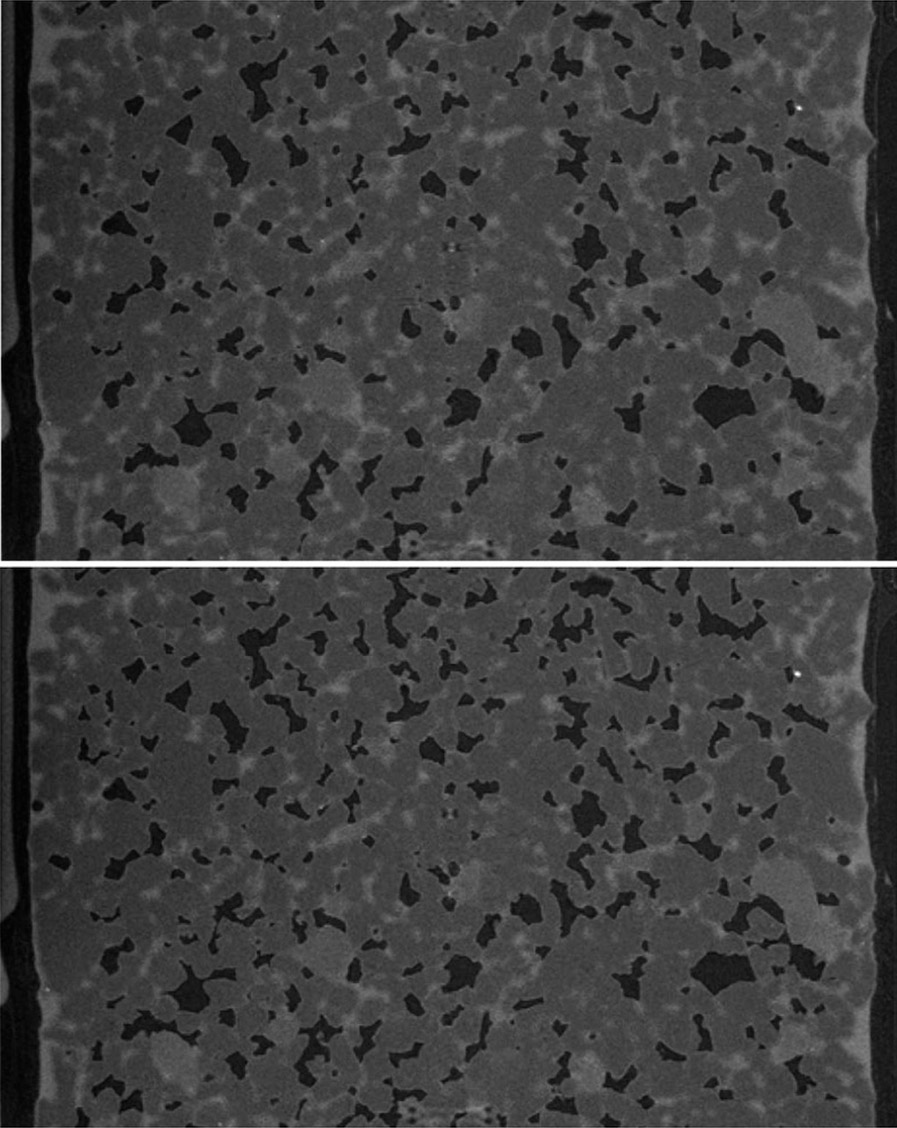 In summary, we have implemented a pink beam tomography capability on the GeoSoilEnviroCARS bending magnet beamline at the Advanced Photon Source. This functionality provides a rapid microtomography alternative to monochromatic studies, especially for dynamic investigations. We have demonstrated the suitability of this approach for characterization of cement samples and of water drainage through sandstone. In our future work, we are planning to use high-performance computing systems to handle the massive amount of data that is produced (in a short amount of time) with pink beam tomography. For instance, we can currently acquire 1000 datasets (each 8Gb) in a single day, but we do not currently have the capacity to reconstruct or analyze this amount of data.

Tyler Deboodt and Douglas Meisenheimer (Oregon State University) collected the data shown in Figure 2 and Figure 3, respectively. This work was performed on the GeoSoilEnviroCARS (University of Chicago, Sector 13) beamlines at the Advanced Photon Source (APS) of Argonne National Laboratory. GeoSoilEnviroCARS is supported by the National Science Foundation—Earth Sciences (EAR-1128799) and the Department of Energy—GeoSciences (DE-FG02-94ER14466). Resources of the APS, a US Department of Energy (DOE) Office of Science User Facility operated for the DOE Office of Science by Argonne National Laboratory (under contract DE-AC02-06CH11357) were used for this research.

Mark Rivers is co-director of the GeoSoilEnviroCARS beamline at the Advanced Photon Source at Argonne National Laboratory, and is the Executive Director of the Center for Advanced Radiation Sources at the University of Chicago. He has been working in the field of synchrotron microtomography since 1987.