Although human cancers are critically influenced by the molecular composition and 3D structure of their environment,1 very little is known about how such cancers sense, modulate, navigate, and respond to 3D tissue-like environmental cues. To gain insight into these biological processes, human cancers need to be cultured and imaged under physiologically relevant conditions. This can be achieved either in model organisms (such as mice or zebrafish) or by embedding the cancer cells in tissue-mimicking extracellular matrix environments, but unique demands are placed on the imaging system in both cases. For the latter case (which provides greater throughput and better defined experimental conditions), the imaging system must meet a number of key design criteria, including fast acquisition (e.g., >1Hz) of volumes that encompass several hundred micrometers in all three dimensions, isotropic spatial resolution (about 300nm), minimal light exposure (to avoid experimental artifacts and sample photodamage), simultaneous imaging of multiple spectrally distinct fluorescent probes, and large optical penetration depth.

Confocal microscopy is the most widely used 3D microscopy technique. In this approach, each voxel is collected serially and therefore the image acquisition rate is limited. Furthermore, as a result of the finite aperture of the objective, the point spread function is anisotropic (with an approximately two- to threefold decrease in resolution in the the z-direction). In addition, the sample is irradiated from above and below the focal plane of interest, which means that the sample is unnecessarily exposed to potentially phototoxic illumination. Confocal microscopy therefore does not meet all the requirements for achieving imaging within 3D microenvironments.

These shortcomings, however, are addressed in an alternative technique—known as light sheet fluorescence microscopy (LSFM) or selective plane illumination microscopy (SPIM)—in which most of the excitation power is concentrated only on the focal plane of interest.2 In a typical LSFM implementation, a ‘light sheet’ is launched from an excitation objective and fluorescence is collected orthogonally with a detection objective. Although diffraction means that there is no such thing as an ideal sheet of light, this can be approximated by focusing a Gaussian beam in one dimension. The beam-waist thickness (which governs the z-resolution), however, is related to the area over which the beam approximates a light sheet, i.e., the field of view (FOV). This means that to image large (100μm or larger) FOVs, the light sheets are typically several micrometers thick, which results in poor axial resolution. We therefore present two techniques with which we aim to extend the resolving power and FOV of LSFM. Through this work we enable 3D imaging over large volumes (>100 × 100 × 100μm), with ∼300nm isotropic resolution.

In an effort to greatly increase the FOV of one-photon LSFM, without compromising the z-resolution, we developed axially swept light sheet microscopy (ASLM).3–5 In ASLM, we scan a laser line focus in its propagation direction. Fluorescence that arises from the in-focus region is then selectively detected in an LSFM format.6 As a result of this unique scanning mechanism, we are capable of simultaneous multicolor imaging of large FOVs (i.e., >100 × 100 × 100μm), with isotropic sub-400nm resolution and superior optical sectioning strength.

In addition, we have used our ASLM approach to image phenotypic heterogeneity in melanoma, mesenchymal cell migration, cell division, and clathrin-mediated endocytosis.3 The low-intensity illumination and highly parallel camera-based detection of our technique means that we routinely imaged cells for more than 10 hours. These long observation times thus enabled observation of cellular phenotypic switching. For example, we observed that following mesenchymal migration, the retinal pigment epithelial cells transitioned to large-scale collective cell migration (see Figure 1). It was only possible to capture this process at such a high level of spatial detail because of the uncompromised resolution, FOV, and optical sectioning of ASLM. 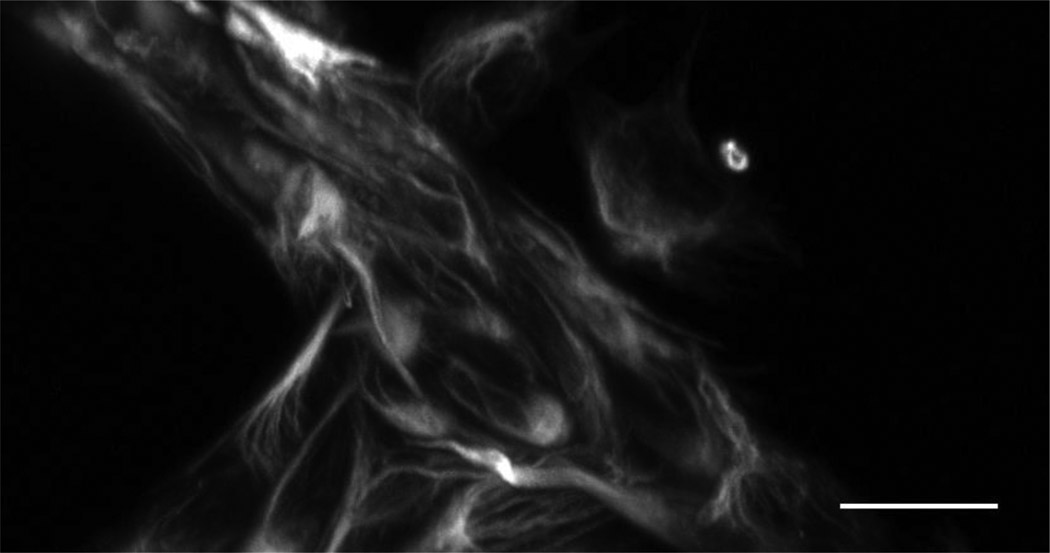 To conduct imaging in more optically demanding environments, and to further reduce out-of-focus excitation, we have also developed microenvironmental SPIM (meSPIM). In this technique, we use a digitally scanned two-photon Bessel beam to create a very thin sheet of light that covers large FOVs.7, 8 A Bessel beam can maintain its beam profile over arbitrary distances at the cost of a complicated sidelobe structure. With meSPIM, however, we are able (with two-photon excitation) to suppress these sidelobes and to provide an isotropic 3D resolution of 300nm, over image volumes of 200 × 150 × 100μm. We have used meSPIM to quantify the morphodynamics and cell-matrix interactions of human cancers in collagen microenvironments.9 With the isotropic resolution and excellent image quality we enable segmentation and quantification of cellular shapes (see Figure 2) and orientation of the collagen, with fully automated computer vision. 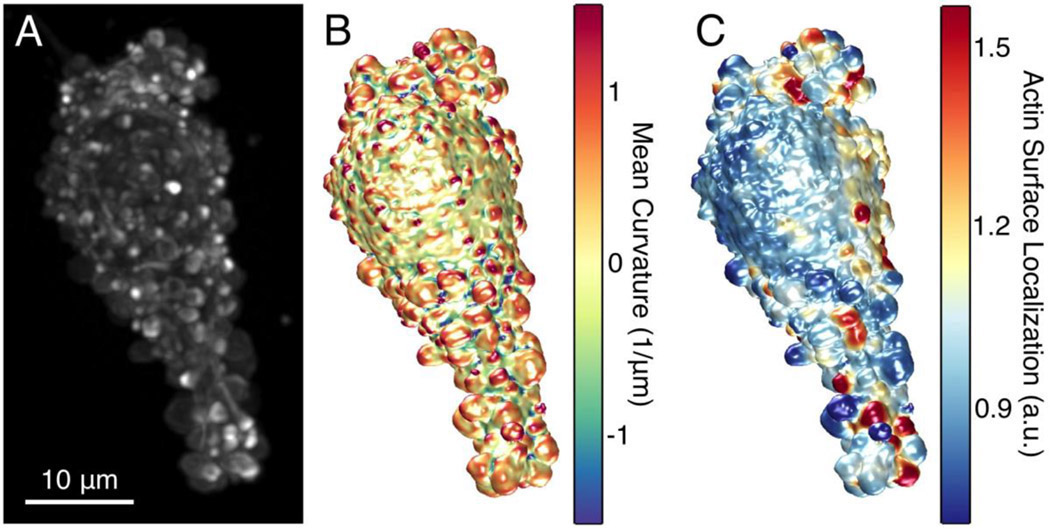 Figure 2. Illustration of cellular morphodynamics in 3D microenvironments, as measured through microenvironmental selective plane illumination microscopy. (A) Maximum intensity projection of a deconvolved image of an actin-labeled (with GFP-Tractin) melanoma cell (MV3) in a collagen environment. (B) Surface rendering of the local mean surface curvature. (C) Surface rendering of actin fluorescence intensity near the surface. a.u.: Arbitrary units.

In summary, we have developed two new microscope technologies, known as axially swept light sheet microscopy and microenvironmental selective plane illumination microscopy. These techniques and associated processing tools provide steps toward quantitative imaging of cancer biology in physiologically relevant 3D microenvironments. However, there are still formidable challenges to achieving this overarching aim. For example, we plan to further improve the spatiotemporal resolution of the techniques so that fast-timescale cellular dynamics (e.g., calcium signaling) can be captured. Furthermore, since both ASLM and meSPIM are widefield imaging methods, these techniques should have great potential in adaptive optics, i.e., to mitigate the aberrations induced by complex samples (such as large tumor spheroids or model organisms like zebrafish). Overall, we believe that our new methods will enable imaging experiments in 3D tissue-like microenvironments, which hitherto were limited to 2D image modalities, and thus provide unprecedented insight into the processes that dictate tumorigenesis.

This research was funded by the Cancer Prevention Research Institute of Texas (grant R1225 to Gaudenz Danuser and RR160057 to Reto Fiolka) and the National Institutes of Health (F32GM117793 to Kevin M. Dean, F32GM116370 to Meghan Driscoll, and K25CA204526 to Erik S. Welf). The authors would like to thank Gerard Garrelts of Coleman Technologies for his assistance with the LabView software.