Tailored light sources are used in a wide variety of applications, such as sensors or illumination devices. In this field, the discovery of the phenomenon upon which LEDs are based,1 as well as the development of LEDs into a commercial product, are considered as ground-breaking steps. Furthermore, the emergence of gallium-nitride-based LEDs (which emit in the UV region) led to a huge leap forward,2 as these are the basis of ubiquitous white-light LEDs (in which different types of phosphor are used to convert UV radiation into a broad visible spectrum). White-light LEDs are efficient and reasonably priced. In addition, their emission profile is nearly Lambertian (i.e., uniform in radiation intensity, regardless of the position of the observer), which is a feature that is preferred for illumination applications.3, 4 However, there are many applications (such as microscopy and optical coherence tomography) where it is preferable to have light sources that emit virtually collimated beams and therefore provide illumination with a limited angular extent.

Although lasers can provide illumination with limited angular range, their light is emitted only over a narrow spectral range (and they can even be virtually monochromatic). Nonlinear effects such as self-phase modulation can be used to generate supercontinua (i.e., sources emitting over a broad spectral range that exhibit properties of a laser beam, such as collimation and temporal coherence). To achieve these effects, however, a high field strength—and therefore pulsed or high-power lasers—are required.5 Supercontinua are thus expensive to generate and are almost exclusively used in medical or scientific applications.

With the aim of enabling cost-effective production of devices that emit collimated beams, we developed an ultralow-threshold nonlinear medium that converts the IR emission from a mass-market laser diode into a spectrally broad, directional beam of white light.6 Our medium is a compound that comprises molecular clusters, of which the core is formed from tin (Sn) and sulfur (S) atoms (in the form Sn4S6) arranged in a structure similar to that of a molecule of adamantane: see Figure 1(a). Owing to its tetrahedral topology, our compound lacks inversion symmetry. In each cluster, the Sn atom is bound to a p-vinylphenyl ligand. These ligands help to consolidate the core,7 and are randomly oriented around the respective tin–carbon bonds to prevent the formation of a long-range order and, in particular, the crystallization of the compound. As a result, we have found that this compound—in the solid state—is an amorphous white powder: see Figure 1(b).

Figure 1. (a) Structure of the molecular cluster, where tin (Sn) and sulfur (S) atoms are represented by blue and yellow spheres, respectively, and carbon and hydrogen atoms in the ligands are denoted by gray and white lines, respectively. (b) Photograph of the compound (in powder form) that comprises the molecular clusters. (c) Photograph of the powder encapsulated in a polymer film, sandwiched between two glass slips, and excited in the bright center spot using an 800nm laser.

When irradiated with a continuous-wave IR laser, our cluster compound emits white light with a warm color impression: see Figure 1(c). This white-light emission retains the spatial characteristics of the laser when it is excited in a transmission geometry: see Figure 2(a). With a decrease in the pump intensity—see Figure 2(b)—the color temperature of the white-light emission also decreases (in the same way as the dimming of a thermal emitter). This result could suggest that the emission is caused by thermal processes. However, the high degree of directionality and the input–output characteristics mean that we can rule out thermal processes as the source of the white-light emission. We also find that the output intensity is proportional to the eighth power of the incident electric field (see Figure 3). In addition, the spectrum is virtually independent of the excitation wavelength in the 725–1050nm range. We also exclude spontaneous emission as the source of the white light because the emitted spectrum changes drastically (from a broad spectrum extending into the IR region with a maximum at 600nm, to a narrow spectrum exclusively in the visible region with a maximum at 450nm) when the compound is excited above the absorption edge, i.e., with photon energies above 3.0eV. 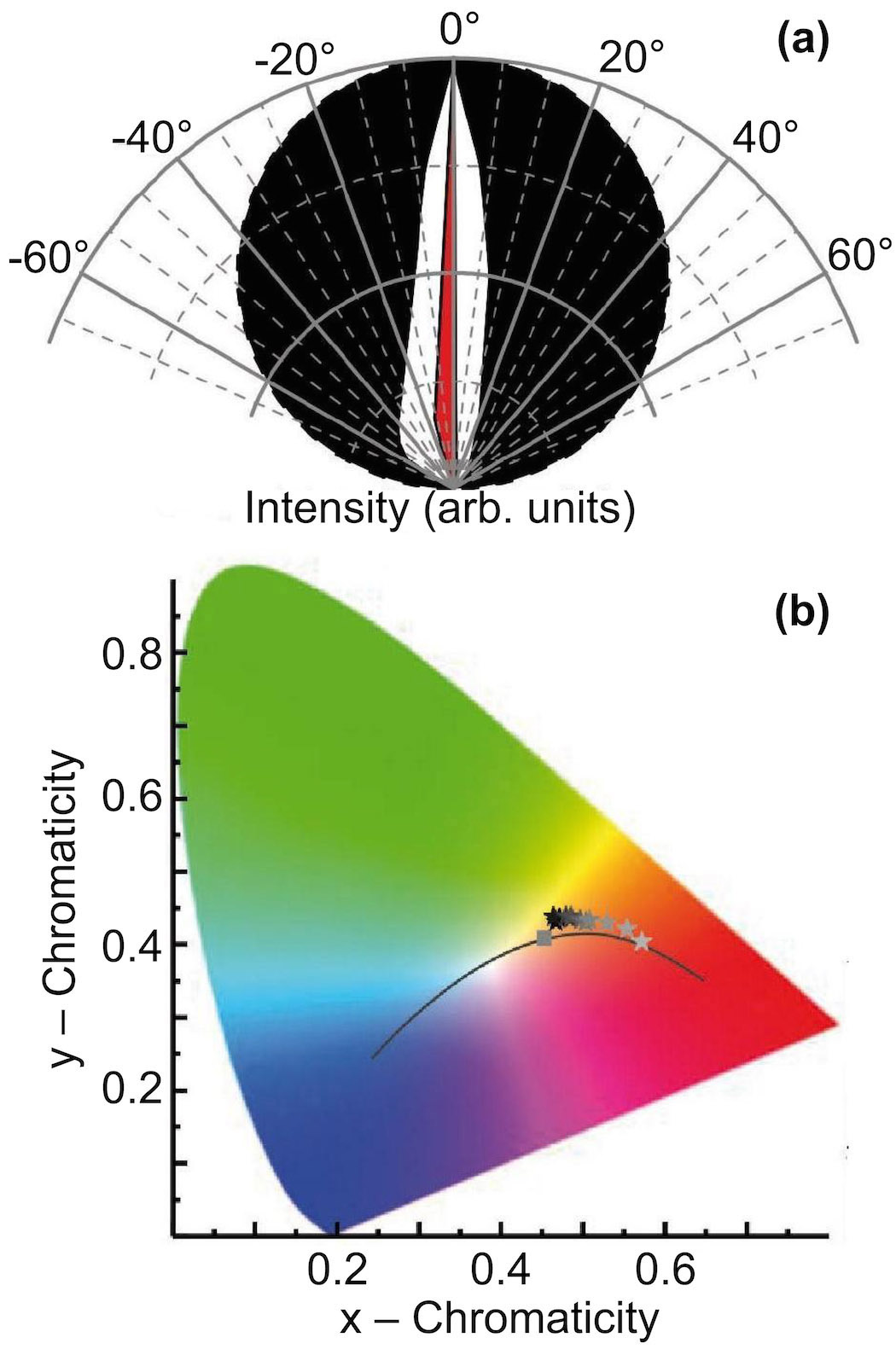 Figure 2. (a) The spatial profile of the white-light emission in transmission geometry (white) is wider than that of the residual laser (red), but narrower compared with a Lambertian emitter (black). arb.: Arbitrary. (b) In a chromaticity plot of the emission spectra, the color gradient of the stars (from pale gray to black) corresponds to an increase in the pump intensity. The emissions of a standard tungsten halogen lamp (gray square) and a black-body emitter (black line) are shown for reference. 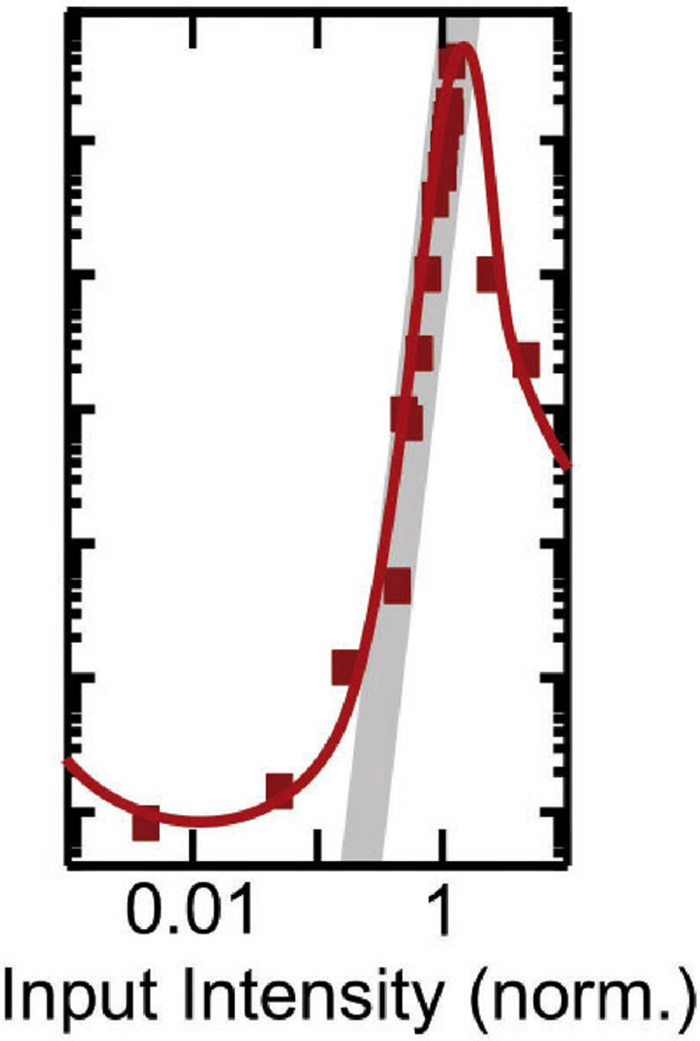 Figure 3. Input–output characteristics of the white-light emission on a double logarithmic scale (red squares), with a guide for the eye (red line). The gray strip indicates the region where the output intensity is proportional to the eighth power of the incident electric field. norm.: Normalized.

To explain this nonlinear emission of white light, we therefore developed a semiclassical empirical model. In this model, we attribute the emission to the motion of delocalized pi-electrons of the organic ligands in the ground-state potential of the cluster. The IR laser accelerates electrons in this highly nonlinear potential, whereas subsequent deceleration of the electrons leads to the white-light emission (in a similar way to the emission of photons in bremsstrahlung). We carried out numerical simulations of this motion, based on the assumption that the potential is anharmonic. We derived the parameters to describe the potential from the size (determined by transmission electron microscopy) and the ionization energy (determined by density functional theory) of the cluster. We solved the resulting set of differential equations using a Python-based code. Our experimental and theoretical results are in good agreement, and thus confirm that our model is valid for describing the mechanism of generation of the observed spectra.

Our model, however, fails to explain the angular emission characteristics (directionality) of white-light emission, which is by far its greatest benefit for potential applications. We propose that this characteristic is caused by the nature of the IR laser, i.e., the polarization of the continuous-wave laser leads to an alignment of the induced polarization of the clusters. This results in a phased-array effect and ultimately in a directional emission profile.

In summary, we have developed a Sn- and S-based medium for the conversion of IR emission (from laser diodes) to spectrally broad, directional white-light beams. The combination of the low threshold of the nonlinear emission process involved, and the collimation and directionality of the emission, enables the use of our cluster-based light source in applications such as microscopy (i.e., where illumination with a broad spectrum and low angular extent is required). We now intend to conduct a more detailed investigation of the generation mechanism of the observed white light from our medium. In particular, we wish to explain the spectral and temporal coherence of the emission, which will require a fully quantum mechanical description of the process. We also plan to embed our light source into a waveguide so that we can increase its cross section and produce a white-light-emitting fiber that can be pumped by a continuous-wave laser diode to emit light of sufficient intensity for illumination applications.