Depleted fossil fuels and increased environmental concerns have triggered an urgent demand for clean and sustainable alternative energy sources. Hydrogen is a very promising clean fuel source, which can potentially fulfill this energy demand. In 1972, Honda and Fujishima first demonstrated the conversion of solar energy into chemical fuels through water photoelectrolysis (the decomposition of water into hydrogen when exposed to light in the presence of a semiconductor material).1 Amongst the numerous semiconductor materials that have since been used for this purpose, silicon stands out as a result of its negative conduction band edge and small conduction band gap, which make silicon highly capable of absorbing visible light to drive the solar hydrogen evolution reaction (HER). Furthermore, silicon is regarded as a very promising photocathode material (facilitating the conversion of light energy to electrons), owing to its very high theoretical current density (44mAcm−2).2 Here, we present the results of our research developing cobalt dichalcogenide-coated silicon microwire arrays as photocathode materials for solar hydrogen generation.

In our previous work, we used silver particles as cocatalysts to accelerate the charge separation in silicon photocathodes, resulting in a promising optimized photocurrent density of −35mAcm−2 at −1.0V compared with a silver/silver(I) chloride reference electrode.3 However, silver has limited practical application, owing to its low abundance in the Earth's crust and high cost. Our current research uses cobalt dichalcogenide materials—specifically CoSe2 (cobalt diselenide) and CoS2 (cobalt disulfide)—as alternative cocatalysts to silver.

We used a hydrothermal method to synthesize CoSe2 particles with a marcasite structure (orthorhombic crystal system) and modified our silicon microwire arrays with this material, achieving a photocurrent density of −14.12mAcm−2 at −0.14V versus a reversible hydrogen electrode (RHE).4 However, we found the marcasite CoSe2-modified silicon microwire electrodes degrade over long periods in sulfuric acid electrolyte solution. The major reason for the degradation is the formation of a silicon dioxide passivation layer on the surface of the silicon microwires: see Figure 2(b).

In response to this issue, we developed thin films of CoS2 and CoSe2 with a pyrite structure (cubic crystal system), which act as both cocatalysts and protective passivation layers on the silicon microwire electrodes: see Figure 2(b).5,6 The silicon microwire arrays coated with pyrite CoS2- and CoSe2 were prepared through chemical deposition of cobalt(II) hydroxide, followed by thermal sulfidation or hydrothermal selenization, respectively (see Figure 3). The photocurrent density of the pyrite CoS2-modified silicon microwire photocathodes (with a CoS2 film thickness of 250nm) was optimized to −3.22mAcm−2 at 0V versus a RHE, in 0.5M sulfuric acid electrolyte solution. The pyrite CoS2-coated silicon microwires are also stable under solar HER conditions for 9h. 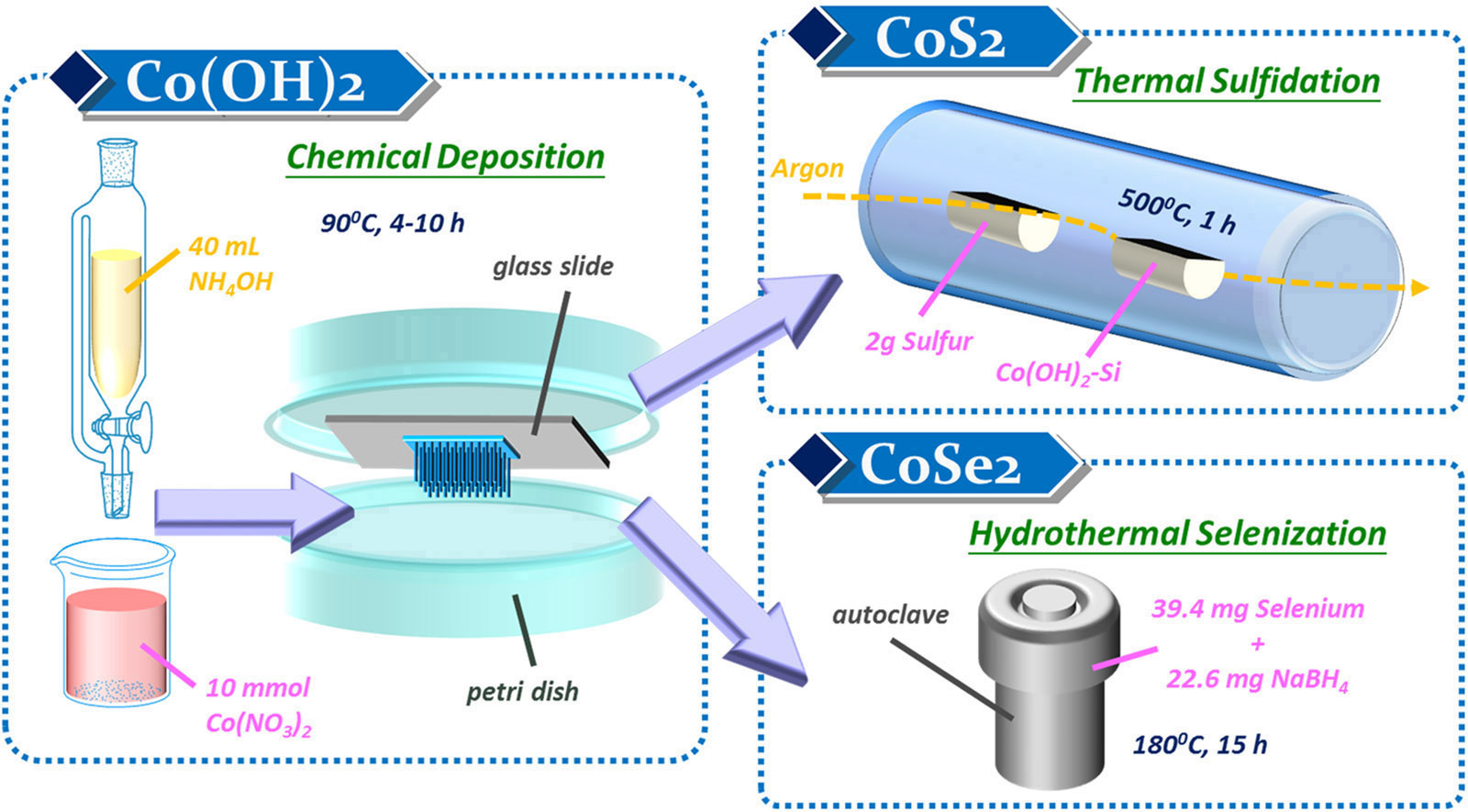 To extend the real application of the silicon photocathode material, we conducted further water photoelectrolysis reactions in electrolyte solutions with various pH values. However, the CoS2-coated silicon microwires show low activity in neutral and alkaline electrolyte solutions, a result of photo-induced charge carriers accumulating on the photoelectrodes. By contrast, pyrite CoSe2-modified silicon microwire photocathodes (with a CoSe2 film thickness of ∼440nm) produce higher charge transfer efficiency in electrolyte solutions with a wide range of pH values. The photocurrent densities of the pyrite CoSe2-coated silicon microwires in acidic, neutral, and alkaline electrolyte solutions are −2.55, −2.60, and −3.83mAcm−2 at 0V versus RHE, respectively. Moreover, the current density of these photocathodes gradually increases to −5mAcm−2 after characterization with chronoamperometry (an electroanalytical technique). This increase in photocurrent density is a result of the CoSe2 structure changing from crystalline to amorphous during the characterization process, producing more HER active sites.

In summary, we have developed silicon microwire arrays as photocathode materials for solar hydrogen generation. The issues of poor kinetics and degradation of the material were addressed by coating the silicon with thin films of CoS2 or CoSe2, which act as cocatalysts and passivation layers. Pyrite CoSe2-coated silicon microwires, for example, give moderate current densities in acidic, neutral, and alkaline electrolyte solutions. Our future work in this area will involve investigating a number of other materials as cocatalysts for silicon microwire electrodes, specifically to find materials more suitable for band alignment with silicon.

Ru-Shi Liu is a professor at National Taiwan University. His research focuses on the development of photoconversion materials (including light-emitting diode phosphors, energy conversion, and storage devices) and nanobio therapies.