Photodetectors are devices and materials that convert light to an electrical signal. They are ubiquitous in modern technological devices, ranging from mobile phone cameras to optoelectronic switches in telecommunications equipment. In the future, fast and efficient photodetectors will be critical for interfacing traditional electronics with photonic computing technologies that are currently in development. Photodetectors come in many varieties, but most rely on a two-step process. In the first step, incident light imparts energy to electrons that are bound to the atoms of the material, allowing them to travel freely. Next, the newly mobile electrons begin moving in response to an electric field (which may be present within the material or applied externally).

These photodetector mechanisms, however, have several limitations. The resultant signal is limited because the free electrons must be guided by an additional electric field. In the case of photodiodes, for example, the induced current flows in the direction of an internal field. This field is generated by a p-n junction, and is therefore predetermined by the construction of the device. The voltage that can be produced is also limited by the difference in energy between the freely moving electrons and the states of those that are confined to atoms (i.e., the bandgap). An additional field is also required to propel the electrons, thereby limiting the response speed of the device. This limitation is especially problematic for computing applications, where operations take place on extremely short timescales.

There are, however, certain materials that are capable of producing current when illuminated (i.e., without the need for any internal or external fields) in a single-step process known as the bulk photovoltaic effect (BPVE). This effect, which was discovered several decades ago,1, 2 has a number of unique features. First, BPVE occurs only in materials that lack inversion symmetry, and BPVE appears to be independent of any internal fields within these materials. In addition, the voltages that the materials can sustain exceed conventional limits (i.e., those imposed by the material's bandgap) by a significant margin. The origin of BPVE was not immediately obvious, and many years passed before a satisfactory mechanism—shift current3—was proposed. This nonlinear optical effect occurs when electrons experience two different types of excitation by incident light. The first excitation is resonant, or real, and occurs between states that are separated by the energy of the incoming photons. In contrast, the second type is off-resonant, or virtual, and occurs between states that are separated by a higher or lower energy than the photons. The interference between these different excitations has a directional bias to its motion (unless such a bias is forbidden by symmetry). In contrast to the conventional case, the excited states therefore intrinsically carry current, and a response can be observed when no internal field is present. The flow of carriers is therefore a combined consequence of the incident light and the broken symmetry. The related expression can be cast in a form that associates a distance (traveled by a carrier) with each transition that is induced by the light. This distance is known as the shift vector, and gives the theory its name.

In our work, we have conducted ab initio computational modeling to investigate the underlying physics of the BPVE and we find that the BPVE mechanism is fundamentally different to that of conventional photovoltaic optical effects. In particular, we have demonstrated that the results from previous BPVE experiments using barium titanate4, 5 can be explained by shift current.6,7 The physics of shift current that we observe clearly illustrate that the BPVE has a number of unique and advantageous characteristics.8 Indeed, these characteristics could be exploited to develop novel photosensors, optical switches, and photonic components.

Since the BPVE mechanism is a second-order effect, we find that materials may exhibit a complicated dependence on light polarization (as shown in Figure 1). In many materials, a 90° rotation of the polarization will result in a reversal of the current direction. Our results also show that the current does not flow in response to a static field because photovoltages are not limited by the bandgap (and may exceed it by over an order of magnitude).9 In addition, because the interfering excitations in the BPVE are both coherent, the overall excited state can only exist in the presence of an illumination field. As a consequence, the commencement (and cessation) of current—in response to the presence (or absence) of illumination—is almost immediate. 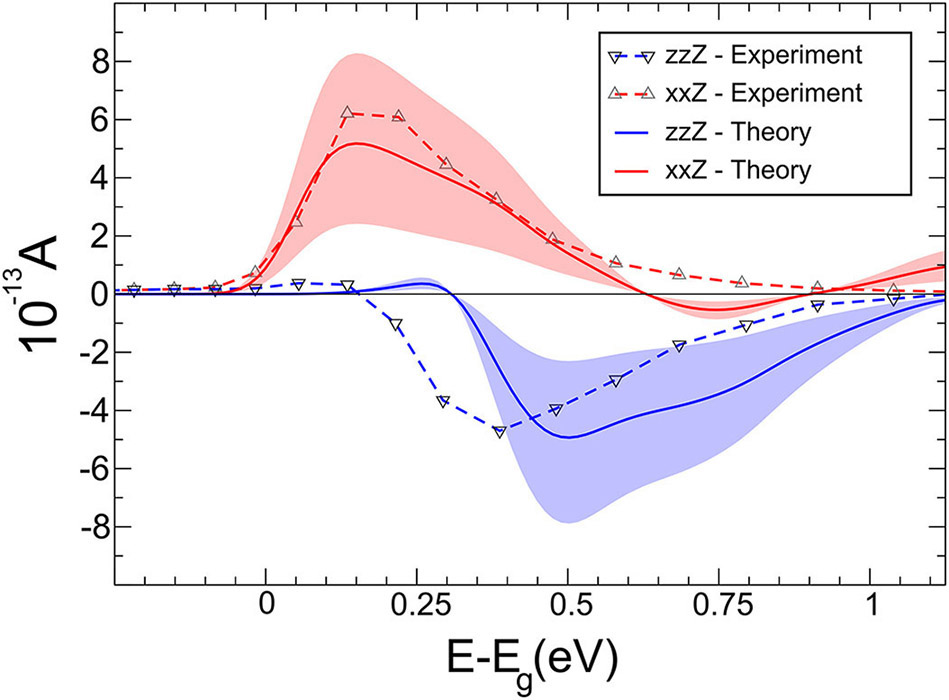 Figure 1. The bulk photovoltaic effect (BPVE) current response of barium titanate, as a function of the energy above the bandgap (E–Eg). Experimentally obtained results4,5 are shown together with the shift current, computed from first principles.6 zzZ and xxZ refer to the material polarization direction, as a response to light that is polarized parallel or perpendicular to the material polarization, respectively. The computed results reproduce the experimental differences in the response direction for different light polarizations and frequencies that are characteristic of the BPVE. A: Amperes.

We have also conducted experiments in which we used an ultrashort laser pulse to generate a photocurrent in ferroelectric lead titanate nanolayers. Through these investigations, we observed that the effects of the photocurrent occur on picosecond timescales.10 We have thus demonstrated that the BPVE is ultrafast and can be used to achieve light-dependent control over the photocurrent response in a single-phase material. Unlike traditional photodetectors (which are slow and complicated), the BPVE mechanism is suitable for rapid, flexible, and precise delivery of significant amounts of charge (e.g., applications that require sophisticated functionality and high-speed operation). These properties could allow for smaller, faster, and more versatile devices of the kind that will be critical for optical computing. Moreover, the significant photovoltages that are achievable could provide a powerful means for manipulating the behavior of other electric, magnetic, optical, and caloric materials.

A major challenge going forward lies in identifying and engineering high-quality BPVE materials. We have recently shown, in principle, that materials with performances significantly exceeding those of currently known materials are possible. Moreover, we have proposed a number of candidate materials that include several lead and bismuth oxides based on the lithium niobate structure.11 Additionally, the results of several experimental studies suggest that device geometry may be crucial to maximizing the potential of the BPVE.12, 13 In particular we have shown that, in polar materials, electrodes comprising an array of nanoscale point-contacts can dramatically enhance the collection of excited carriers, allowing greater-than-unity quantum efficiency and power conversion exceeding the Shockley–Queisser limit (i.e., which defines the maximum efficiency of conventional photovoltaics).14 Such high-performing materials and device configurations will be essential if the BPVE is to find widespread application.

In summary, our work highlights that the physics behind the BPVE are fundamentally distinct from conventional photovoltaic optical effects. For example, no internal or external field is necessary to separate excited carriers, as this can be achieved with continuous illumination and broken inversion symmetry. As a consequence, many of the limits of conventional photovoltaic effects do not apply to the BPVE. Moreover, the photoresponse has a direction that may be dependent on light polarization and frequency, occurs essentially immediately, and may produce photovoltages well in excess of the bandgap. Realizing this potential will, however, require high-quality BPVE materials and a firm understanding of how they behave in device contexts. To this end, our current research is devoted to performance optimization through compositional and structural tuning, as well as understanding the dynamics of heterogeneous systems that include BPVE materials as functional components.

The author acknowledges support from a National Research Council Research Associateship Award received at the US Naval Research Laboratory.

Steve Young received his PhD from the University of Pennsylvania, where he studied the bulk photovoltaic effect and the physics of topological materials, under the supervision of Andrew Rappe. He is currently a National Research Council postdoctoral associate.